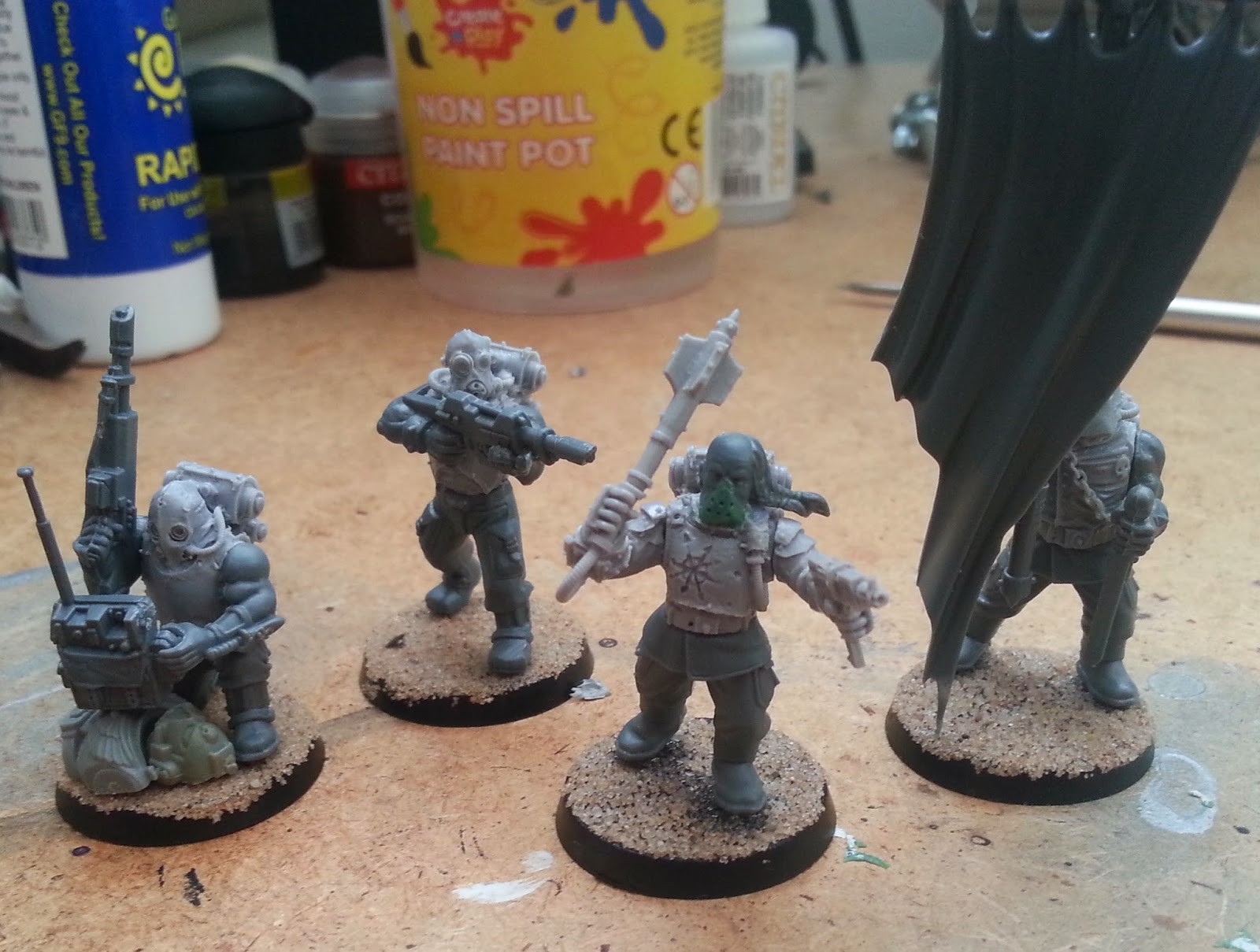 Well i have already started on making up a few of the models i need and decided to start with the platoon command. With this i wanted the commander to look a little bit different to the sergeants so have attempted to do something i have never done before, work with proper green stuff. As i haven't done this before i have only attempted something simple, but i quite like it so far. 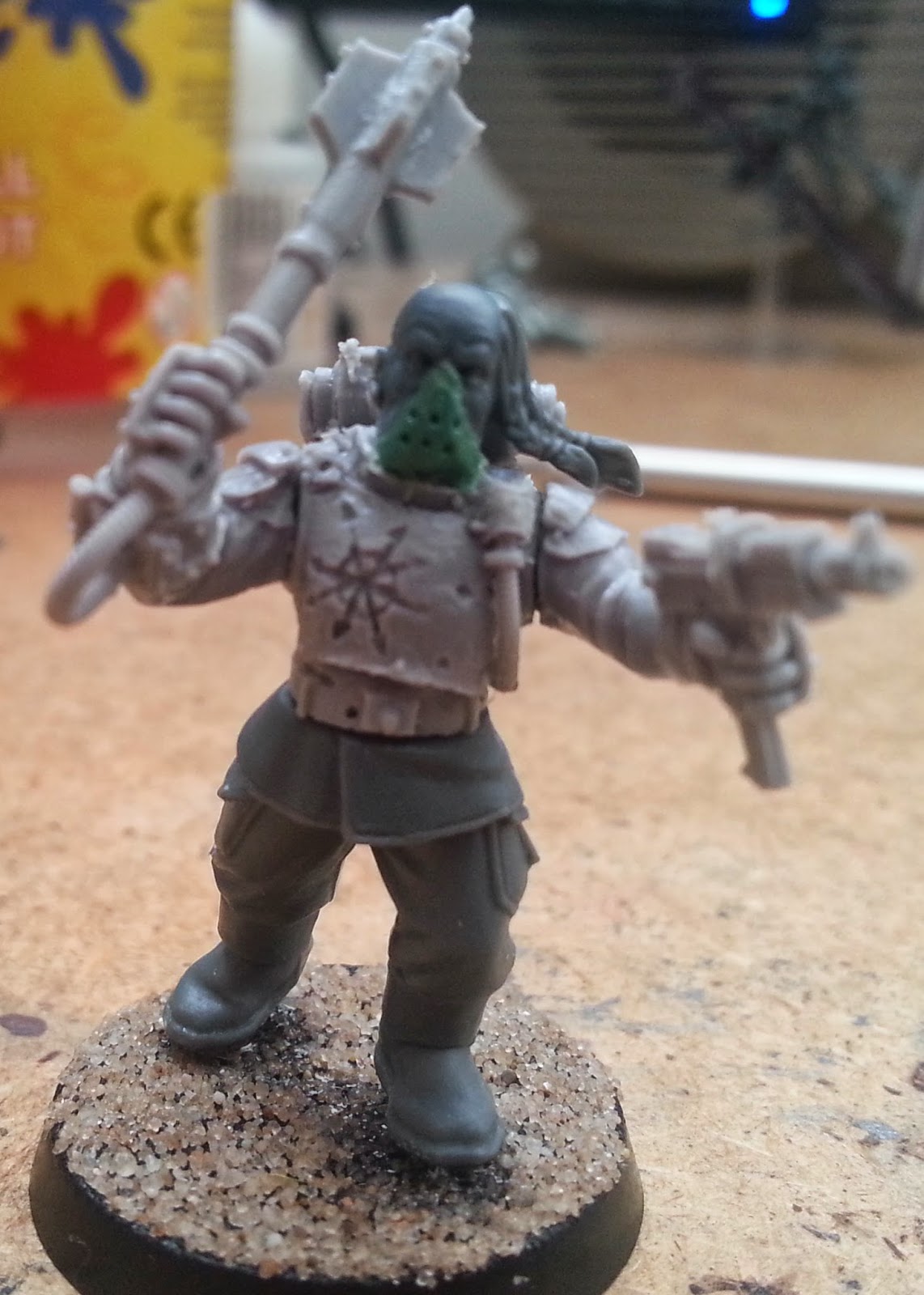 This is the commander, i wanted to give me a unique head but it was bare, and while i have a sergeant like that it has always bugged me. Why doesn't he need breathing apparatus when every one else does? (bar the force commander, but hes possessed n stuff). So i have attempted to make him a mask, it still needs to join up to the pipe on his chest but im happy with it so far. Its embarrassing to say but that's about the 3rd attempt at it and second head. First time round i failed so badly it wasn't worth salvaging. The arms are both from the enforcer kit to give him a little uniqueness. 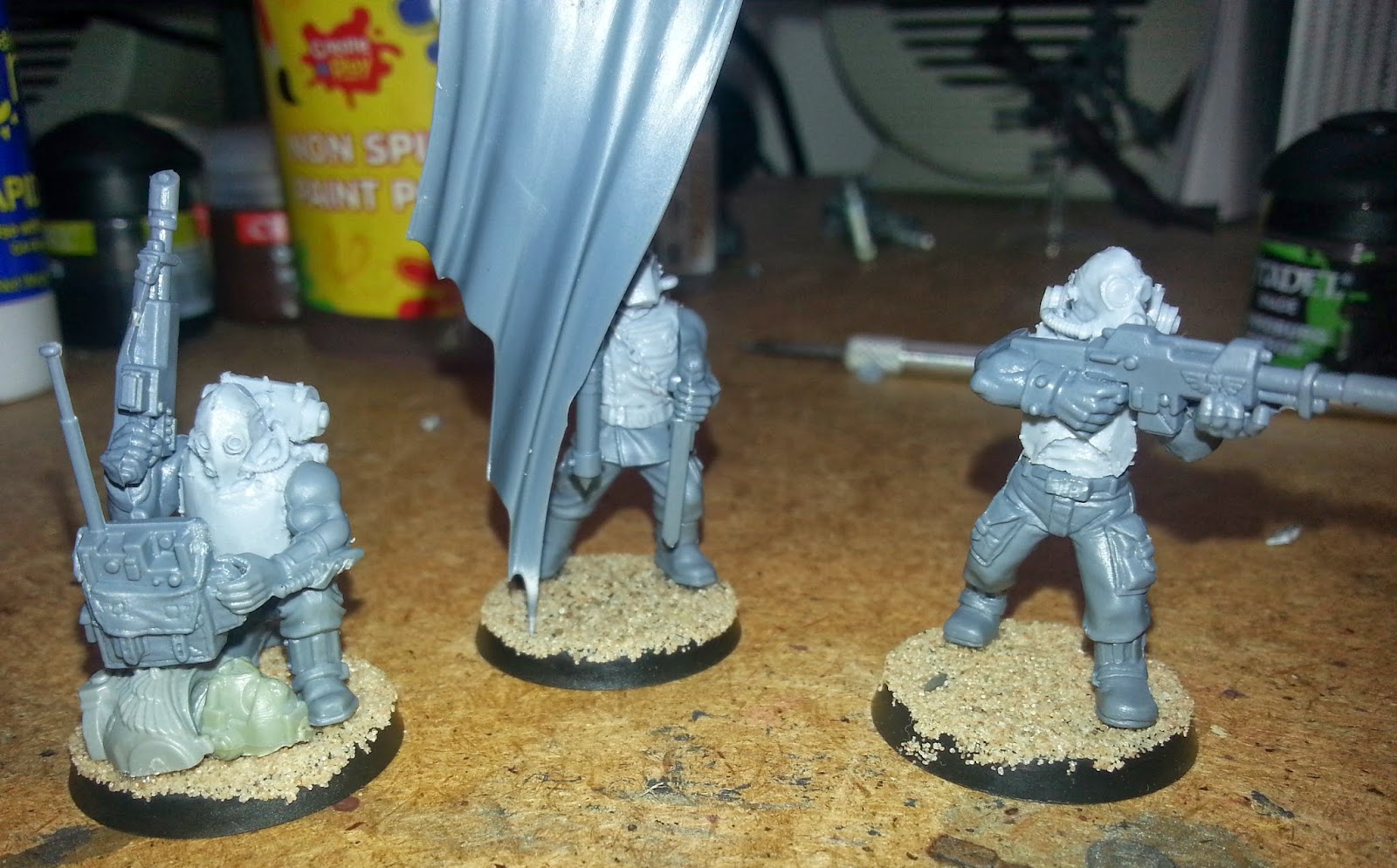 As for his protectors i have gone with a similar set up as the company command, banner and vox (no plasma though). All of them have catachan arms, this guy like the built guys looking after him and i just though it was a nice little theme. The vox is a catachan vox but as i couldn't place it on his back i put it in his hand. After gluing the torso to the legs i realized that the vox wouldn't be ground height so i had to build up the ground with the dead space marines (which will be a blood angel, just saying). 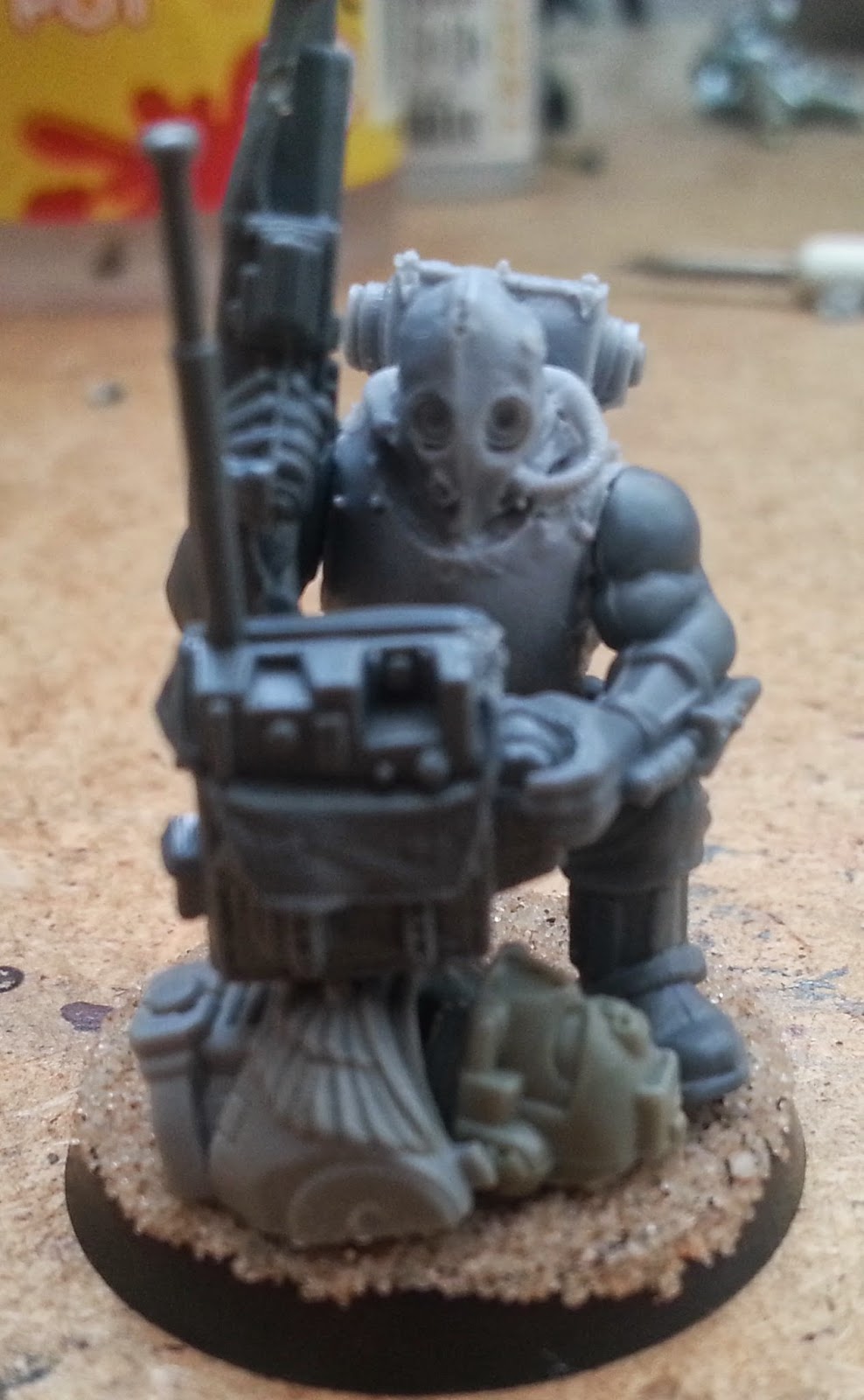 The banner bearer uses arms and banner from marauder horsemen from the fantasy range, and while its a little over the top it gets the job done. And finally the grunt who will take the first shot, is just catachan arms and legs with a renegade torso. He was the most irritating out of the lot as the catachan legs have a belt on them, and so do the forgeworld torsos. So one of them had to go as i don't want a force of guys wearing 2 belts. I'm all for chaos but that's a little too far. So i had to cut one of them off. 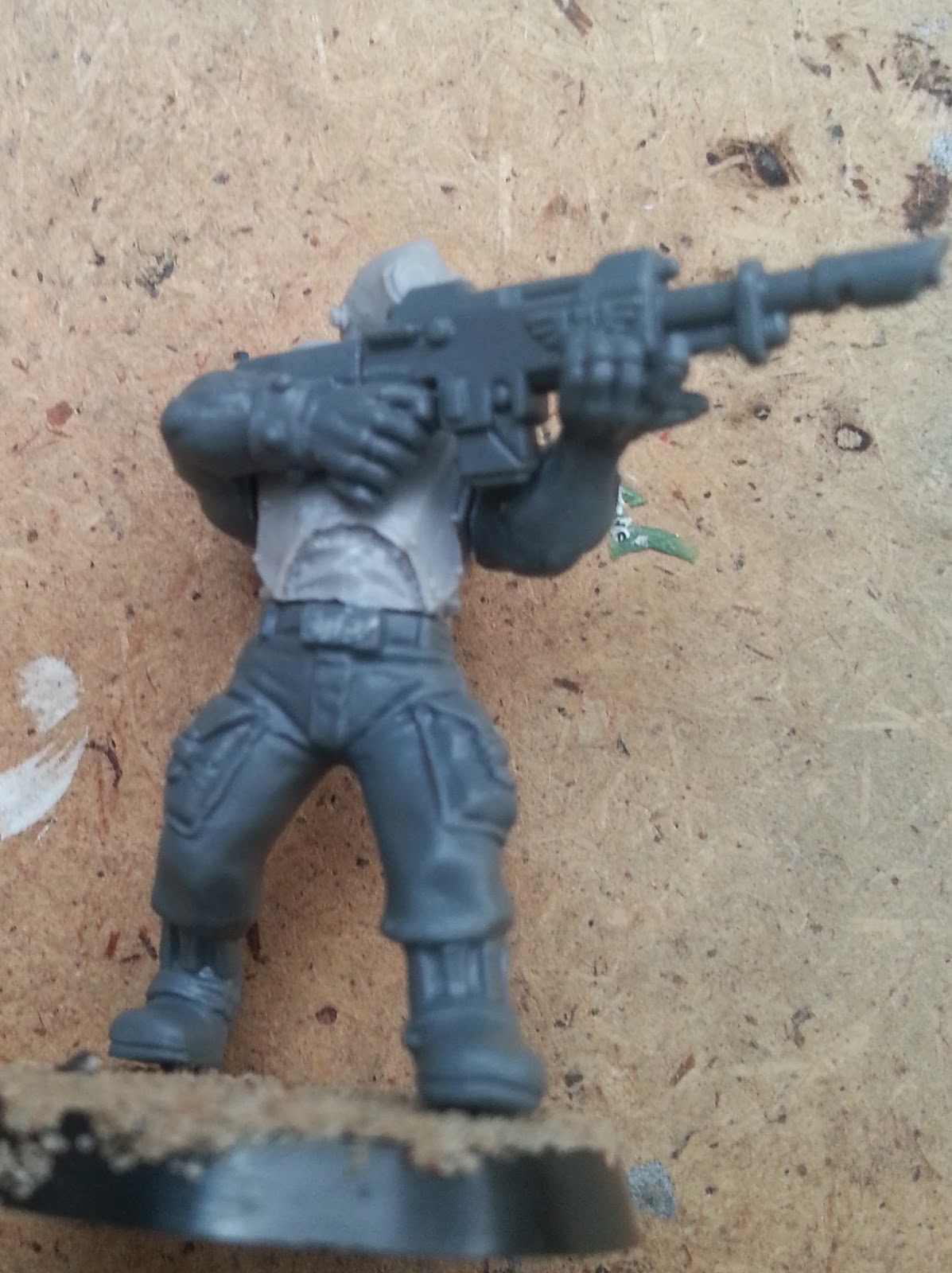 The final guy will probably be a flamer dude when i get round to making him. What do you guys think of the squad as a whole? look ok?
Posted by Malduran
Labels: Chaos Renegades, Painting