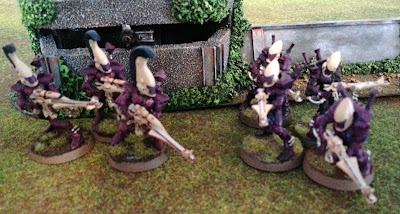 Around my local club the debate about which unit is the better troops option for Codex Eldar, it’s quite hotly debated, some believing the aspect warriors are the superior unit while others go with the humble guardian. While I prefer the guardian myself I haven’t looked into it very deeply, until now. This post is a look at the pro’s and con’s of each unit and how they compare on the battlefield to give myself an idea of which unit might be the superior choice.

So let us look at a direct comparison between the two units. For 117 points you can have either 9 Dire avengers, no upgrades, or 13 Guardian defenders, no upgrades. 4 more guardians is quite a difference. But what does that difference really mean? Let’s assume we are facing a 10 man unit of tactical marines, I will let you pick what chapter; let’s see what the two units are capable of doing.

Both units shoot at the tactical marines, the Dire avengers will on average kill 2 marines rounding things up, and not including the bladestorms. The guardians on the other hand will kill 2.9 marines, again not including bladestorms. Well that’s obvious isn’t it, more shots means more dead. Ok then let’s assume (now this is all totally hypothetical, and will never happen in a game) that the unit stays at full strength for 5 turns and we are against an army of tactical marines, who don’t move and are deployed 24 inches away at the start of the game. Over those 5 turns which unit will kill more? Starting with the dire avengers, they will be in range turn 1, with a 6 inch move, run about 3 inches, and then have the 18 inch gun range to be able to shoot. So over 5 turns the avengers should kill about 10 marines. Now for the guardians, assuming the same 3 inch run, they won’t be in range turn 1, so turn 2 they can start to shoot. Over the 4 turns they will kill 11.6 marines. Theoretically the guardians stand more of a chance of killing the enemy then the dire avengers.

Now that was a nice little make believe situation there, which would never happen. What happens if the marines shoot back? Well if 10 tactical marines shot at the 9 man dire avengers, from max range, they would kill approximately 2.22 models, not terrible. Now on the guardians, same situation, the unit would lose 4.44 models. Twice as many guardians would die to the marines, not a great compromise.

Up to this point I have only taken a direct comparison to make the comparison easier to see. However in our little game things are never that easy. Both units have upgrades available to them, the dire avengers can take an exarch in order to have a single character who can increase the survivability of himself, and his unit, or just make that model damn near impossible to kill in a challenge. The guardians on the other hand can select a heavy weapon platform to give them a more diverse range of targets to shoot at. Both can have a wave serpent to travel in, which can again alter the abilities of the unit.

Now what’s to come seems a bit of a cop out now, but unfortunately its the truth. Which unit is the better one totally depends on how your army is built and what you plan on doing with the unit. Here is an example, if you take a foot list, who are you going to want marching up the table out of cover? The dire avengers or the guardians. Obviously you will want the avengers as they can act turn 1 and will survive a light shower of bullets, the guardians will not, they will die and you will have wasted your points. Now if you are going to be putting a unit in cover on an objective taking pot shots until the enemy come close, you are going to want guardians, as you get more bodies and the cover will make them last a lot longer, plus if you give them a heavy weapon they can help while holding the objective.

Because of my play style, I prefer guardians, they do more for me and I’m not afraid to keep them in cover and dear my opponent to come to me. But if I was going for a much more aggressive army, dire avengers would have to be the way forwards.

What do you guys think of the two rather similar troop choices? What do you go for?
Posted by Malduran
Labels: Article, Eldar