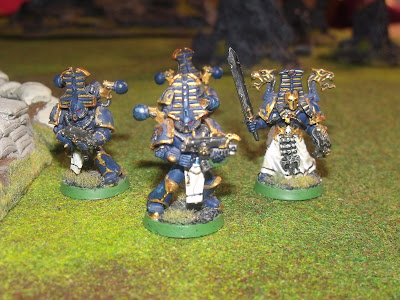 As this isn’t a regular game im not going to go into why I won/lost, its just going to be a bit of fun. So here are the army lists:

We rolled for deployment and chaos wins and deploys first. He sets up one unit on each side of the table, with the thousand sons and sorcerer on my right.

I have a feeling the game will be decided on the right of the table so I set up two units with my battle leader while my 3rd unit sits on my objective. I roll for seize and fail. Just so I don’t forget to say, we forgot to roll for warlord traits.

To start the game the chaos sorcerer casts boon of mutation on himself and takes a wound by rolling a 1 for his armour save (unlucky) but as he survives he gets to roll on the new boon table and gets shield of force, so he gets shroud... not very useful. The movement phase ends quite quickly as the thousand sons move forward as do the chaos marines a little. Shooting starts with the chaos marines shooting at the space wolves holding the objective, and deals 0 wounds thanks to cover saves from the plasma gun. The thousand sons shoot at the grey hunters in the woods on my right and manage to kill 2 of them with their inferno bolts. Cover didn’t save me this time.

The grey hunters on my right flank crawl forwards though the woods rolling terribly and run terribly, while the hunters in the other woods scrambles rounds to make sure everyone is in range while still in cover. The unhindered hunter’s move forward advancing on the thousand sons, making sure the rocks in between grant them a cover save.
Shooting from the objective holders manages to kill a single chaos marine, while the other hunter squad manages to kill two thousand sons from long range. So far the games been going well.

The sorcerer again casts boon of mutation on himself but doesn’t take a wound this time, and rolls... 66. Fuck. He ascends into deamon hood and becomes a deamon prince... that's really not good for me. Now looking at the rules even though daemon princes can be pykers the boon table doesn’t say that he keeps this special rule. So for now, he can’t cast any more spells. That needs to be FAQ’ed.
As he is now an absolute monster, the prince goes straight for the grey hunters and could possibly be in charge range. The thousand sons move to shoot at the larger grey hunter squad but roll terribly for movement and only move 3 inches.
Shooting starts with the sons and manage to kill 0 this time due to bad to wound rolls. The chaos marines shoot at the left hand side grey hunters killing 2 of them, causing them to take a moral test but they hold.
The interesting bit next, the prince declares a charge on the hunters in the woods, over watch fails to do anything and the prince rolls 8 and gets into assault. Bugger. The prince goes first killing 1 hunter (the melta gun guy) thanks to rolling a lot of 1’s to wound and I fail to do anything. I hold however which is good, I guess?

As the prince is quite a large threat I’m unsure what to do, so I go straight for him. The large hunter pack goes straight for it intending to charge this turn.
Shooting is short as only the left hunters can shoot and manage to kill another chaos marine. Soon there won’t be any left.
Combat and charge the deamon prince, he issues a challenge but my battle leader refuses (not very character full I know, but I need the extra attacks). Before any one attacks the prince manages to kill 3 marines from the original pack leaving only 1 with a power sword remaining. MY attacks and I deal a single wound with my power sword. It makes me feel like I should have accepted the challenge. I lose combat and take a moral test but both units fail them, The lone hunter escapes but the largest pack are caught and so hold position.

As the left hand side is going badly for the chaos forces the marines fall back behind the rocks again, out of range for now. The thousand sons roll a 6 for movement and move to target the left hand side hunters as they can get in range of a single model who they kill in the shooting phase.
Combat as the prince issues another challenge and I refuse again as I need my power axe to do some damage. The prince kills 3 more marines while I fail to do any damage with my regular attacks thanks to the prince’s ability to re-roll 1’s on his armour save. The power axe then gets to swing, deals 2 wounds but the invulnerable save stops them. Not great. I hold this time.

The lone hunter regroups and stays in the woods. The hunters on the left, seeing the new threat, reposition themselves to shoot at the sons. Both unengaged units of hunters fire at the sons but fail to do any wounds; this is looking very bad for me.
Combat and another challenge is issues and refused. The prince kills 2 more hunters but also takes 2 wounds himself in return; unfortunately it doesn’t appear the wounds he took before becoming a prince carry over so he’s still got 2 wounds left. I'm not confident with this. 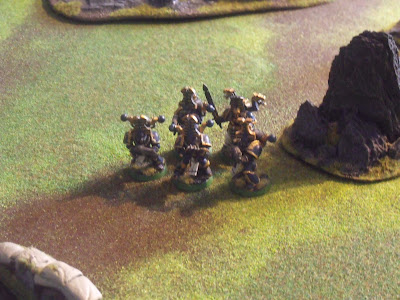 The thousand sons move forward again and shoot at the hunters on the left and manage to kill 3 of them, leaving 2 hunters left, who fail their moral test and flee 7 inches, close to the edge of the table.
Combat and again the prince issues a challenge and I just accept at this point as I’m going to lose either way. The prince gets 5 hits and 4 wounds on my lowly battle leader and he dies... this was always going to happen. The hunters hold though even though their leader was just massacred.

The hunters regroup and move towards the sons, hoping to get a few shots on them before they die. While the lone hunter runs at them as he will try and get some use out of his power sword.
The Long shots from the hunters fails to do anything, you didn’t expect anything more did you?
The hunter makes contact with the sons who fail to do anything with over watch. AS they strike at the same time the hunter deal 1 wound which gets past the invulnerable save. The sons kill the lone hunter and consolidate 4 inches. The prince then kills the remaining hunter’s he’s in combat with and consolidates 4 inches as well. 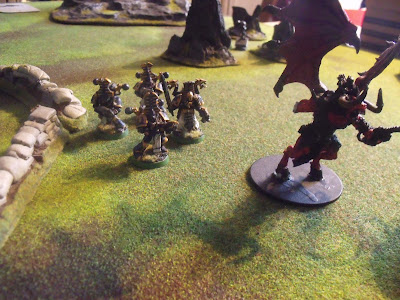 The thousand sons blow my remaining 2 models off the table... game over. 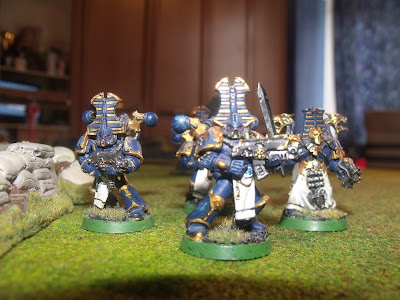 I got my arse handed to me but the game was cool, and the new rules for chaos seem pretty cool. The chaos boon table is odd and while some effects are pointless others are amazing. Free daemon prince? Great, but not if you pay out the mouth for a regular character. But in this case it worked out for him. Stealth on the other hand, not great, and I doubt would help much.
The regular marines going cheaper for chaos again I like, and I like that they have the choice of two combat weapons instead of just having them standard. I like the codex quite a bit.

Anyway I hope you enjoyed the report.