Renegades vs Knights 1500: Stomp to Victory 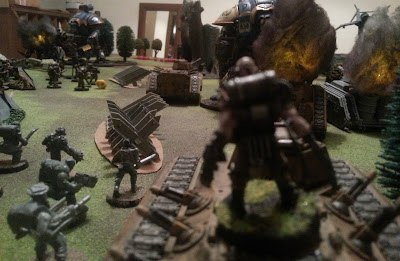 My second game with my renegade evolving list, and I face an Army of the Imperium, made up of a Knight detachment and help from the Militarum Tempestus detachment. Can my renegades take on the knights or will then just get trampled underfoot?

I finally get to use my Evolving list for the second time, so lets hope it does better this game.

Forces of the Imperium

Rolling on the Mealstrom table we get Cloak and Shadows with hammer and anvil deployment, we will be getting 3 objective cards each and don't reveal them to each other. We set up the terrain and place the objectives around the table. Rolling for table edges I win and select the edge with the defences next to the them.

Rolling for deployment the Imperium wins and selects to deploy first. He sets up his Knight Gallant on the left and the Knight Errant and two Tauroxs on the right. His melta squad is in the Valkyrie waiting in reserve, ready to come in later.

My deployment has my vehicles on my right flank backed up by the sentinels, but the command chimera deploys at the back. The defiler sets up on the left, and the Medusas deploy inside the defences. My infantry deploy around to shield the more important units, the mutants protect the command chimera while the infantry protect the Medusas. I keep the Blood slaughterer in reserve to deep strike in later.

His whole force moves towards the Renegade lines, the knights take point while the Gatling Taurox takes cover behind rocks.

The first shots come from the knight Gallant, targeting the infantry in front of it, its large blast hits killing 11 in a single shot. Firing its melta cannon, the Errant shoots at the demolisher but it scatters a little and hits the demolisher Immobilises and clips the Devil dog, stripping off its heavy flamer. Both of the Taurox primes target the sentinels, they glance the front one twice wrecking it.

The damaged infantry squad moves up towards objective 2 while the other takes the defensive position. On the left the defiler moves straight for the Gallant, ready to punch it in the face. On the right the Chimeras move up and the devil dog goes into the woods taking the objective. The sentinels move up towards the Taurox.

The medusas target the Errant, one shot scatters to no where, another hits but gets stopped by the Ion shield. The Devil dog misses its mark on the knight and the demolisher cannon gets absorbed by the ion shield as well. What little autocannon fire I have fails to do anything. Shooting its battle cannon at the Gallant, as well as its autocannon, the defiler manages to do nothing.

Eager for destruction the defiler makes a long charge straight into the Gallant, using its daemon forge ability first. Flailing its power scourge the defiler reduces the knight to ws 3, so its needs 4's to hit instead of 3's. As luck would have it only a single hit makes it mark losing 3 hull points but still in the fight. Attacking back, out of the 5 attacks only 1 hits as well, and it fails to penetrate its armour. He attempts to stomp the defiler but it moves out of its cumbersome way. 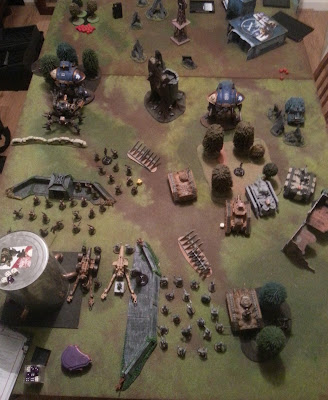 Coming in from reserve the Valkyrie comes down the right flank towards my armoured column. The Errant smashes its way though the woods to get close to the demolisher. Holding position the Tauroxs steady their aim.

Firing everything it has, the valkyrie shoots at the comment chimera but misses with everything. With the devil dog so close, the errant aims at it hitting with its melta cannon, but also clips a chimera as well. Both of the tanks are shaken by the blast. It then fires its heavy stubber at the demolisher so it can charge it. With the devil dog a danger, both of the Taurox primes target it, the battle cannon and autocannons do nothing, so it is down to the gatling cannon and storm bolter in the side armour which manages to wreck it for first blood.

Crushing trees as it goes the knight charges into the demolisher shredding it with its D weapon, wrecking it. On the left flank the defiler reduces the gallant to ws 1, so it needs 5's to hit, and it hits with 3 attacks... the defiler explodes. 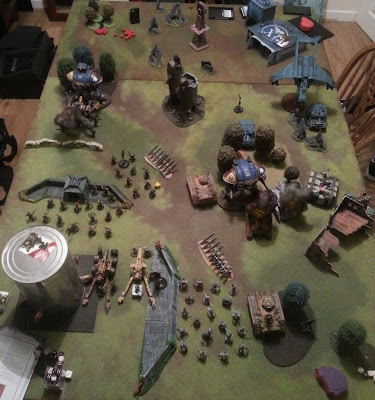 Unfortunately no blood slaughterer, so my infantry move up to objective 2 so I can claim it. Moving to protect the command chimera, the mutants move in front of it to take the brunt of any assault. The chimeras and sentinels move up to attack the Tauroxs.

The unshaken chimera flames the side armour of a taurox and strips off a hull point, but the autocannon fails to do anything. Firing flamers out of their hatches the transported units try to do something and manage to glance the other taurox as well! The big guns fire next targeting the Errant, one shot hits taking off a hull point, the other scatters and clips my chimera on the left, shaking it! 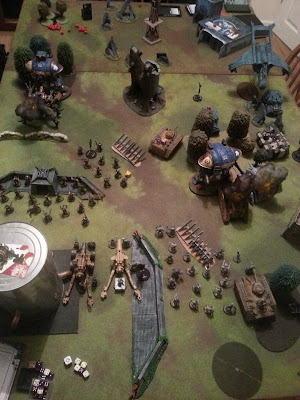 Obviously needing objective 3 one of the Tauroxs moves off towards it, while both knights move forwards, the gallant towards the infantry while the errant move towards the medusas. The valkyrie goes into hover mode and moves towards the left chimera and the guys jump out into the woods. 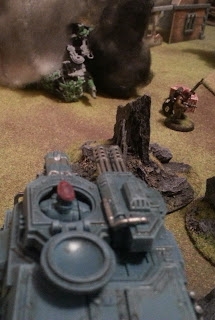 Firing its lascannon, the valkyrie again misses a chimera, the errant targets the infantry behind the defence line but the shot scatters onto the medusa crew killing 1, it then stubs the medusa crew and fails to do anything. The Gallant fires its missiles at the mutants killing 6 of them, it then targets the infantry in front of it but misses. From their position in the woods the scions take out the chimera on the right exploding it with melta fire, killing 9 of the passengers in the inferno and the one guy left runs for it. The taurox fires its gatling cannon at the sentinels and with a large number of 6's wrecks the remaining walkers.

Assault and the Gallant charges into the infantry, killing them all, but mainly with its stomps. The Errant charges the Errant and just murders them all. 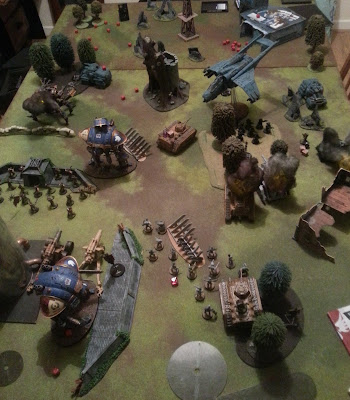 Finally from reserve the Blood slaughterer appears, materialising next to the Taurox at the back after a little scatter. With the errant so close, the mutants again try to act as a blocker. With little to do, the infantry on the left push up behind the gallant, trying to get behind it. The chimera next to the scions, it moves closer getting ready to flame them out the woods.

Burning down the woods, the troops fire their flamer out of back of the chimera killing 2, then the heavy flamer takes out 6 more, leaving 2 left. The infantry throw a krack grenade at the rear of the gallant but don't do anything. Autocannon fire from the command chimera fails to do anything as well. 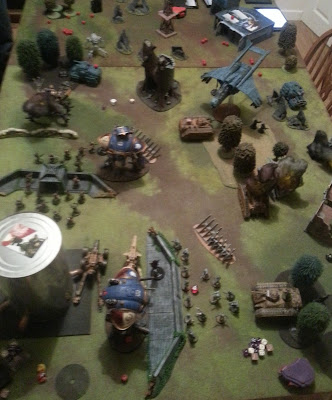 With its path clear the Taurox on the fight moves down the table though the tank graveyard. On the left the other moves away from the blood slaughterer, not wanting to be destroyed. Ignoring the daemon engine, the Gallant looks at the infantry swarming around it, while the errant looks at the mutants. 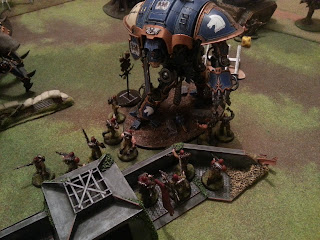 Ignoring the mutants at first, the errant shoots the command chimera and shakes it, then kills a mutant with its stubber. Taurox fire strips another hull point off the command chimera. One of the remaining scions in the woods brings his melta gun to bear on the chimera, immobilising it. With the other taurox in the rear of the chimera it wrecks it with ease, forcing the passengers out, who get gunned down (well 6 of them do) by the scions hanging out the side doors.

The gallant takes one step to charge the infantry and kill 7 of them over the combat, but they hold thanks to their sigil. 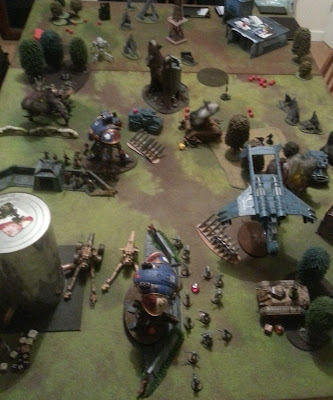 Overwhelmed with blood lust, the blood slaughterer moves as fast as possible towards the Taurox as it has to move towards the closest model. The few remaining infantry who jumped out the chimera move to hopefully kill off the two remaining scions on the table. My running infantry rally!

Gunning down the scions, some how the infantry manage to take them down with their autoguns. With the errant close, the melta gun can fire out of the command chimera but the shot does nothing.

Assault phase and the blood slaughterer fails its charge, and the gallant kills 7 more infantry who run but manage to escape. 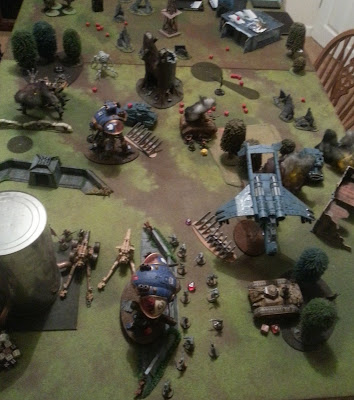 As an objective card he draws 'grudge to settle' so I nominate the Blood slaughterer for him to kill, hopefully diverting a knight away and maybe if he's unlucky I could take it out? The Gallant goes after the daemon while the errant moves away from the knight. The cannon taurox takes an objective while the other gets behind the command chimera.

From the wreckage of their chimera the remnants of the command squad shoots their melta gun at the taurox next to them but only glance it. 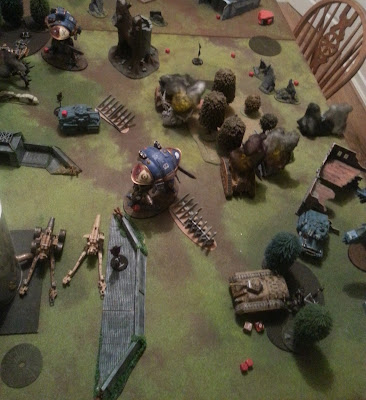 We roll to see if the game carries on (not that it matters) and it does.

My 2 models get gunned down.

Victory to the Imperium

That was a harsh game, I though my list would be able to take out 2 knights, or at least take down 1. However it seems my list can't, and needs a lot more work. Thinking about it I made a big mistake setting up the way I did, I should have had the infantry on the right so they could move up, grenade the tauroxs and then swamp the scions, instead of setting up opposite a knight and get stomped to death. That was quite a big mistake thinking about it, while I doubt chimeras could have taken down the gallant, it would have been able to possibly done something?

From this game, I would say I might need to upgrade the Medusas to have breacher shells, for ap 1 and armour bane, which helps vs anything with an armour but massively reduces their effectiveness vs infantry who needs to die. The flamers just don't really do much so I will likely just drop them all for the extra points, but I'm not sure what else to buy. I hate to say it but I might need to bring back the Chaos daemons for the soul grinder muscle power.

The first game with this list was vs blood angels where I just couldn't shift death company or dreadnoughts, so upgrading the medusas could help take out the dreads, but would have reduced my ability to take out the death company. The defiler did nothing vs the blood angels and very little vs the knights, so maybe I should drop that? It was always a point sink and could go towards better things. If i'm not taking the defiler I don't need to heretic upgrade (even though the idea is awesome).

However! The reason I love the renegades is because they can be so characterful, so if I do drop the heretek I am loosing the character who I envision leading the whole force. Unless I try something else to represent one of his lieutenants, the fact the army has built up around the Ferrograde Campaign that we played a while back (and will be continuing again soon) it really makes me want to stick to the theme. I will just have to think about it for now.

What would you have done differently in the game? And what do you think I should drop?
Posted by Malduran
Labels: Battle report - 40K, Chaos Renegades, Evolving list