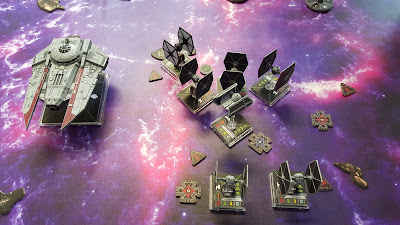 After playing about 4 games of X wing I entered a store tournament with a list that I have used in a couple of games (as I have a very limited model collection) and entered with the aim of not coming last, and with 15 other people this was going to be a large ask as I think they all have a lot more experience playing.

So I had a little swarm with Darth vader leading the way and Omega leader to be a pain in the ass (I hope), I have only played against 4 different lists before so I have no idea what I need to look out for but should still be fun.

In my first game I came across the following list:

So two big ships with big hitters inside them, I have no idea what to do here so my plan was to try and get behind 1 and take them out one at a time instead of splitting the damage and doing nothing.

Unfortunately we didn't have enough space mats for the tournament so this game was on a green one, so we are in orbit above Endor... just go with it. The asteroids were placed quite close together in the middle with one or two separated out at the top of the board. With deployment I placed my ties on the right hand side and both of his decimators deployed in the middle facing to the left. As the game played out he circled the out side of the board with his decimators taking shots when he could and got some easy tie kills early on. However I managed to reduce his Decimator with darth vader down to 1 hull point and he sacrificed it to finish off my darth vader, leaving me with just Omega leader and his Palpatine. The time was running out so we had a few turns with just those two left, and Omega took the second decimator down to half health while staying alive thanks to target locks. Time was called and we added up how many point we destroyed and it ended up as draw, we killed the same amount. I was bloody amazed, and my first game was a draw, better than a loss. 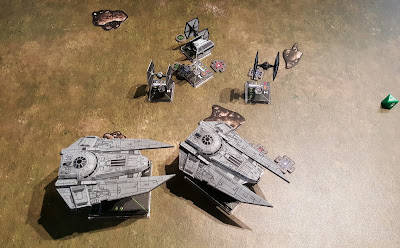 Again I face an Empire list but this one is some what different to the last.

This game was something similar to what I expected to face, Two very scary Ace pilots and a big ship for support. The game went on with my having my tie fighters clumped together while his shuttle went on the opposite side of the table. Both Soontir and his Vader went in the middle. The game went well for me, I made a few mistakes having my tie fighters bump into each other in a conger line but it worked out for me as Soontir fell fly right in front of them. I lost a tie fighter early on but the remainders took down Soontir fell. His vader was irritating taking down the regular Ties but my Vader was able to take down his. This left me with Omega leader and Vader left to harass his Shuttle and they both got behind him and eventually destroyed it, but it took a while thanks to Palp and its sensor Jammer.

Two games in and I have a victory and a Draw, I'm feeling quite amazed at this point.

Another Empire list but this one was different again.

Fighting a swarm with a decimator, this seemed like a very bad match up for me as he had the same number of ships and one of them is a Decimator, great. I set up my my two tie/fos on the left while the aces and academy pilot set up in the centre. This game starts badly, I over reached Omega leader and the decimator did a number, crippling him turn 1 and getting destroyed turn 2. His swarms attacked Vader but I managed to keep him alive for a while killing a pilot and damaging another but he couldn't survive the onslaught. My two tie/fos and the academy pilot managed to kill off the Decimator with critical hits (they are a lot easier to kill when there is only 1) and were the ones who survived the longest. The last few rounds of the game came down to my two fie/fos and two of his academy pilots with Night beast dog fighting. We had a lot of maneuvers trying to get shots on each other but it came down to time. At the end of the game I had 2 relatively healthy fos, while he had 1 healthy academy pilot, one down to 1 hull and hight beast with 1 damage. We added up points and he won by about 10 points, so if I had just finished off the damaged pilot I would have won by 2 points. A great game, and very close, but it did get a little messy with so many ships.

I have never played against Scum before so this will be a lesson if nothing else.

After we were deployed it ended up with my ships on the right hand side, Fett on the far left and the two Y-wings to the right of him. The asteroids were mainly in the middle of the table. As the game progressed I kept Vader and Omega leader towards the back this time so they don't get killed straight away. Moving though the asteroids to try and get a little more defence nothing happens in the first turn or two. Fett is moving around the Asteroids while the y-wings face the tie fighters straight away. The ties take down the shields on the lead Y-wing but I then start to lose ships. Despite my maneuvering the 360 view of the turrets just kills the little tie fighters then Fett joins the fight and kills off the rest of my ships. I manage to take off the shields of the Y-wings and reduce one toe a single hull point but either way he kills everything of mine while I failed to do any damage to him. So a 100 – 0 loss for me.

I think I played this badly, but i'm not 100% sure what I should have done differently. Maybe if I could have dodged Fett a little longer and taken out a Y-wing? Just don't know right now. 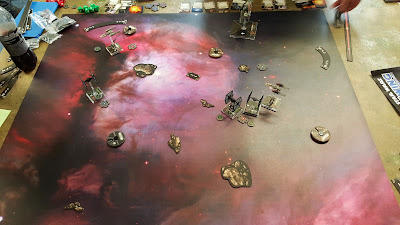 Another Scum list but this one was rather different, a lot more fire power but less resilient, so that's good for me.

In this game I set up on the left side of the table while he was in the middle, we both moved forwards and it just became an absolute mess, I lost a tie or two but by the end of the mess it ended with most of my remaining ships behind his, and it kind of just ended from there as he couldn't get a shot on me and I just finished his ships over the next few turns. His Y-wing was the issue to start and I got lucky taking it out first, the other 2 ships missiles made a real mess of Vader nad Omega leader but they survived with a whole lot of luck.

I can't remember the score on this one but I won.

My very first X-wing Tournament and I walk away with 2 Wins, 2 Losses and a Draw, how very average but I am so very happy with that as I shouldn't end up in last place with that. After all is said and done I came 9th out of the 16 people there, and very happy about it. I walked away with a alternative art C3P0 card which I likely wont use any time soon as I only have Empire at the moment, but I have a few Rebel ships floating around so I might play them at some point in the future.

The event was run really well by its organiser and all the guys there were great, I think most people had a unique list with a nice spread of all 3 factions (not that I met any rebels). The winner of the Event took (to my best knowledge) Poe Dameron, Corran Horn and an A wing, I never saw his list so I can't say that they each had.

Next time there is a local X wing tournament I think I will try to enter that as well, but i'm not sure how I will change my list. Maybe I will keep it the same and just get better using it? Quite often I messed up my moves and bumped by mistake, which really didn't help, I could do with some more practice.
Posted by Malduran
Labels: X-Wing