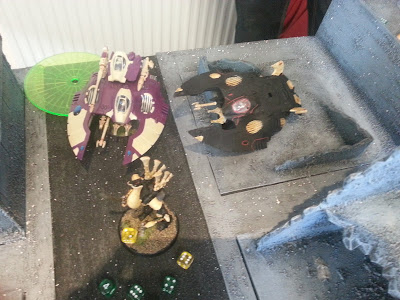 To start the tournament we all were given a random opponent and assigned a random table, each table being totally different, some with a large amount of terrain, others with little to none, just the luck of the draw, so
you can’t complain really. My first opponent was randomly selected and I was up against Eldar... well isn’t that just a kick in the nuts.


For more info on the tournament here is the overview

I brought my Eldar list to the tournament, Craftworld Dem-Kirath 999 points.

The list is very heavy with strength 6 shooting and i took 3 troops under the impression that i would have to take objectives. As it turns out every mission was purge the alien, never mind.

Well an eldar army that is quite different to mine, the first thing that strikes me is he has a forgeworld warp hunter. Now i have never come across one of these before but i have the rules at home, its a barrage D cannon (for those of you who don’t know, it always wounds on 2+, instant kills on 6, glances on 2-4, pens on 5-6) and that scared me. The wraithlord while cheap isn’t that scary. The quad gun however can wreck me, the war walkers and vipers won’t stand a chance. Eldrad? Very expensive for this points level.

As i said it was purge the alien, but we rolled hammer and anvil deployment. The table we where assigned to was table 5, city fight. It was the most covered in terrain out of all 6 tables which in this scenario suited me fine. It gave me a chance to hide from that nasty quad gun. We rolled for deployment and he won sides and to go first. He set up his quad gun and defence line between the opening looking down the street in the middle of the table. The dire avengers held the quad gun, joined by Eldrad. The guardians joined them on the line, the bikes sat at the back out of range of anything. The wraithlord and warp hunter set up in terrain hiding behind a building. Finally the war walkers were hidden at the back.

I responded with the guardians high in a building looking out of a window, joined by the farseer (mistake, you will see why later). I hid both the dire avengers as i was afraid he would just kill them with the warp hunter. The big war walkers hid with the farseer out of range while the small ones where on the left. The falcon hid on the left from the quad but would be in range of the warp hunter, its just a risk i have to take.

He used Eldrad’s power to re-deploy the war walkers to the front of the defence line, then scouted them forward out of sight. I didn’t scout.

Eldrad casts fortune on the dire avengers and goes to cast it on the guardians but finds he is out of range, a slight misplacement there. The wraithlord jumps down the ruin and walks forwards towards the falcon.  Both war walkers come out of cover to shoot at the guardians as the warp hunter moves a little bit to get a better hiding place.

Shooting starts with the war walkers shooting at the guardians, and this is where i made a mistake, only the top floor has a window, so all he could kill is 3 guardians on the top and the farseer... damn. Well after all is said and done, thanks to a million look out sir rolls and going to ground i only lost 4 guardians, they hold. The black guardians of ulthwe take a shot at my farseer as well but i look out sir and save the guardian. That could have ended a lot worse. The warp hunter targets the war walkers but it scatters into no where as he can’t adjust the roll. 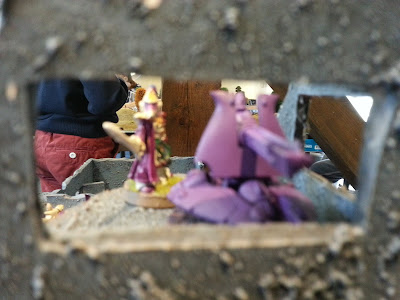 I attempt to cast prescience on the war walkers but the runes of warding prevent me, i get above 12 so perils but my ghost helm kicks in stopping and damage. The large unit of walkers move around to see the enemy walkers but i can only get 2 in line of sight and keep a cover save, so the 3rd has to hide. Going full pelt the vipers move forward and can just see the back of the warp hunter, the small walkers move to stay out of sight but see the wraithlord. To finish the movement phase the falcon moves forwards to see the warp hunter.

Unleashing a torrent of laser hell on the opposing war walkers , my large squad wreck both of the vehicles, gaining first blood. The falcon shoots at the warp hunter but it passes its cover save, and the vypers only manage to get a single glance on the tank. The smaller war walkers fail to do any damage to the wraithlord (but it was never expected). 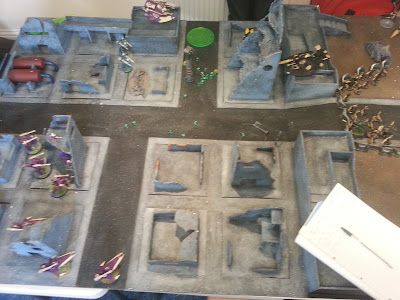 As he forgot to move Eldrad last turn he can only fortune the dire avengers again. Not forgetting again, eldrad moves. The warp hunter moves again trying to get out of sight. The wraithlord moves towards the falcon again.

The quadgun targets the farseer as he couldn’t move last turn but he goes to ground and every one is safe. Firing the blast of reality tearing warp energy at the falcon, the warp hunter rolls a 1 and doesn’t do anything to the falcon.

Without a sound, the wraithlord attempts to charge the falcon, but he is just out of range, thank god for me. 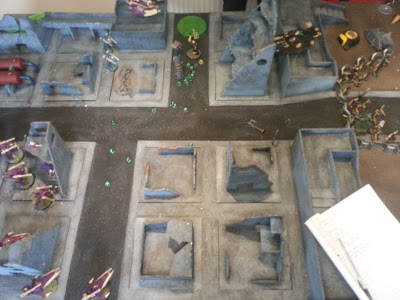 Again my farseer tries to cast prescience on the war walkers but fails due to the runes of warding. The fire dragons get out of the falcon but roll snake eyes and can barely move to threaten the wraithlord. The falcon moves to hunt the warp hunter. Both the war walkers and vypers move and hide while keeping the wraithlord in sight.

Shooting from the fire dragons on the wraithlord is disappointing as they only cause a single wound on the monster. The falcon shoots at the warp hunter and penetrates it, blowing off the D cannon, effectively neutralising it. The vypers try to take off the last hull point but fail, the war walkers can’t see the warp hunter so target the wraithlord failing to do any damage. 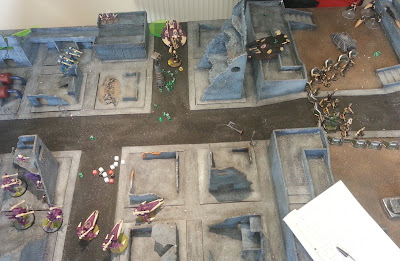 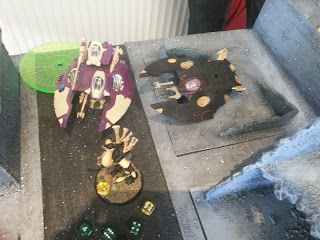 Eldrad guides and fortunes the guardians, and fortunes the dire avengers. The warp hunter is desperate and rams the falcon, which i welcome. Both take a strength 7 hit, but unfortunately nothing happens, it could have been a free victory point. The wraithlord trys to get up to play with the fire dragons but doesn’t move far enough.

The guardians see a vyper and strip a single hull point off it. The quad gun again kills a guardians thanks to look out sir, but i don’t go to ground.

As the fire dragons are a distance away the wraithlord charges the falcon, and its hammer of wraith hit makes it explode... well i guess it would. 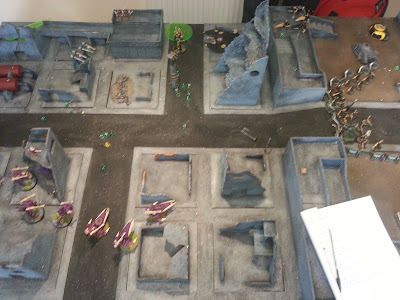 I fail to cast prescience again, but move the farseer down a level so he can’t be targeted. The fire dragons move forwards to see the wraithlord, the vypers move out of sight of the guardians but to see the warp hunter. The war walkers stay still.

The fire dragons fail to do anything to the wraithlord, i just can’t make the 4+ to wound it for some reason. Then the wall of laser fire shot at the warp hunter does nothing, statistically 36 shots mean, 18 hits, 3 glances, and 2 hull points gone, but that sort of thing happens. I had to take the chance.

The warp hunter packs its bags and bails, moving it gets out of the combat area towards his deployment. The wraithlord this time makes it up the building to greet the fire dragons.

Shooting from the guardians can just about see a war walker and he makes it explode, damn.
Combat phase and the wraithlord charges into the fire dragons, he kills 2, and takes a wound from a melta bomb being desperately clamped to it. I hold.

I make sure i move around properly now as if i can kill the wraithlord next turn i might be able to pull a victory out of this.

Combat phase and the wraithlord kills 2 more dragons, and the last guy holds his ground like a champion. Exactly what i needed.

The bikes finally wake up and move towards my table edge, then boost in the shooting phase right into my deployment zone.

Combat and the wraithlord kills the fire dragon.
Dem-Kirath turn 5

I move the dire avengers on the left and small war walkers into range of the bikes. They then shoot at it and kill 2, they then run 3 inches. The vypers and big walkers target the wraithlord and manage to bring it down!

Combat phase and i make a slight mistake, i get greedy and charge the two walkers into the 2 bikes, they make there leadership test and regroup. I kill 1 of them and the other guy holds. 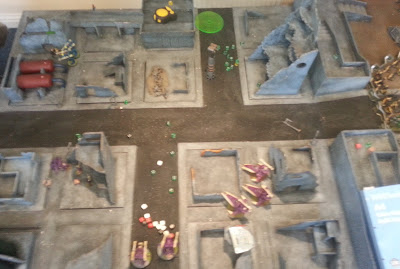 Does the game carry on? No.

We add up the scores and its:

Well that was an interesting game which i think i can learn a lot from:
·         Line Breaker: I got greedy here, i should have just left it a lone when the bikes broke, even if the game carried on they would have probably been able to re-group and i could have killed them then. But no, i got greedy and gave the game away by trying to get an extra point to win. Next time i’m in a tournament i will make sure i don’t get greedy.
·         Fear: I was scared of the warp hunter and quad gun in this game, which im not 100% sure i should have been looking back. Ok the warp hunter could have done a real number to my infantry but he was targeting vehicles which isn’t great. If i left that a lone and killed the wraithlord straight away i might have been able to pull a victory. The quad gun... its dangerous and i think i did ok hiding from it denying his shooting. But if i had just targeted the actual gun with the vypers and war walkers turn 2 i might have been able to kill the dire avengers or guardians from a distance. But as it is I’m not sure. What do you guys think?
·         Character placement: Putting the farseer on the top floor seemed like a good idea at the time but as it turns out it could have got him insta-killed. So in future make sure i have more bodies to throw in front of him.

So that was game 1, sending me and my opponent right into the middle of the rankings, 5 winners above, 5 losers below. I guess it’s better than a loss. What would you guys have done differently? Next game coming soon.
Posted by Malduran
Labels: Battle report - 40K, Eldar