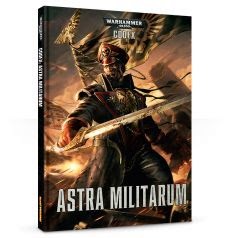 I have managed to get my hands on a copy of the codex so though I would share my thoughts on the codex compared to the previous incarnation. But first I would like to say all though out the codex it calls the army the imperial guard, the two are interchangeable so at least we aren’t stuck calling the army by its stupid name and now have new players know what we are on about. Anyway onto the review.

Starting with what’s new, we have the obvious Wyvern which games workshop has plastered all over their website and white dwarf, the rules aren’t great for it, 4 blast barrage is quite nice but at strength 4 ap 6 it’s not the best weapon in the world. Its special rules make it a little better with barrage, ignores cover and shred means it will get a few wounds and might even kill some lightly armoured infantry. At first glance I ignored this tank thinking it was terrible and I will never buy one but I have some news for you, its 65 points. That's NOTHING for the chance to snipe a character or heavy weapon out of a squad. Hell you would be silly not to take a squad of 2 (3, I would argue is a little much) and be able to just irritate your opponent. The guns twin-linked as well, so you have a chance of hitting what you want. Will it be in the ‘competitive’ lists, probably not but I think a smart commander will be able to utilise these very well.

Staying along the tank rout we finally have a model for the hydra, the alternative kit for the wyvern, and it’s a nice model but the rules are pretty much the same except they have lost the ability to ignore jink saves. Shame but to compensate its price is reduced by 5 points, not exactly a fair trade but you’re a guard player, suck it up, the emperor protects.

Sticking with the tank theme, we also get tank commanders now in the HQ section, its just a leman russ squadron but one of them is BS 4, costs 30 points more and can issue orders to its own unit, which I wouldn’t say they are very useful but you can let the commander split fire, so that's a little boost I guess? I’m not overly impressed by them but its great they are in there for theme reasons. I have no idea how it works for warlord and how the traits will interact, but a scoring unit of russes wouldn’t be bad? The Imperial guard traits wouldn’t help it in anyway though (more on that later).

Finally the only other really new think is the Bulgryns, the alternative Ogryn, both of which has new models but the Ogryns rules haven’t changed at all. The Bullgryns on the other hand are ok, they are armed with a grenade launcher (which is terrible) and a shield which makes them better if they stand together and grants a cover save boost to models behind them. They are allowed to swap their weapons for a more combat based role, 5++ and a power maul which I would probably take over the standard equipment but still not great.

Which not technically new I will put them in here, the storm troopers (sorry the Tempestus boys) make an appearance and they keep the same unit structure as their codex meaning you have to take a command squad and a unit for an slot, but you can take a few more. They are exactly the same as their own codex but they can’t take a valkarie as a transport.

The battle bus comes into the book as well and practically everybody can take one, well they gotta sell the model right? It’s good, it has nice rules and everything, but I just hate the model and it doesn’t feel very guard like to me. But to each their own and more options is always better than nothing.

Rules wise the order system is the same, apart from I don’t see a rule saying that you have to start with a higher ranking officer anymore, so you can chop and change I think, but don’t quote me on that. The orders are ok, and I’m sure you have seen them leaked already, so I won’t go into them deeply, but I do like that it has simplified them, giving a unit a special rule other than things like ‘re-roll successful cover saves’ and its handy being able to split fire a lascannon if you need to (provided you pass the test).

Warlord traits have a nice mix, some are simple like a bubble of preferred enemy and outflanking D3 units, other are ridiculously great by letting you ignore moral from 25% casualties in a bubble, and two make you better at orders in different ways. Interestingly if you can’t issue orders e.g. commissar lord or tank commander, you can now order people, which makes the tank commander a little bit better.

I have to say that I think a lot of people will be disappointed that the guard didn’t get anything massively new and shiny, but to them I say, I’m glad! That's not who the guard are, they are the meat shield against the darkness, they walk into hell and die, that is their role, if they win its though tanks and attrition, not having an amazingly powerful new unit like the wraithknight or riptide, it’s not their style. Now granted they are allowed the baneblade and a knight titan, yer that's fine but that's not strictly guard, that's imperial armour and a knight legion aiding the guard.

An underwhelming new release model wise but I would say the new rules make up for it defiantly.

Unfortunately just like the Tyranid codex we have lost a lot of friends along the transition from 5th to 6th, and honestly I have very disappointed by some of them, and technically, some aren’t losses but I will explain that later. Much to my disappointment we have lost both Captain Al’harem and Chenkov, both of which had models!!! so they can’t even use the tyranids excuse of ‘we don’t support rules with no model’. They didn’t do amazing things but they really added something to the guard.

Another loss is Sly Marbo (or guardsman Marbo to the younguns) who has had a model since 3rd edition! What the hell guys, he’s been around a lot longer than most and has a model why drop him? He was a great little model, was it because you felt bad about ripping off Rambo? Did you think maybe slyvester stalone might start suing you for copyright infringement? Whatever the poor excuse, I don’t want to hear it, and if you dare release him as a dataslate to get that little bit more money out of us, well I might just have to pay you a sly visit.

Other things we have lost are tank, many, many tanks which 5th added, all the artillery tanks which don’t have a GW model. Luckily the rules are all in Imperial Armour volume 1 second edition so we can all still use them but I just find it odd that they removed them, maybe the book just wasn’t selling? WE still have the basilisk though, as its probably one of the oldest models in the game, if they removed it I'm sure people would have turned up with pitch forks.

I don’t understand why they removed all the models that they have, they all had models, they all were quite popular and really didn’t need to be taken out.

Just realised I forgot sergeant Boring, sorry, Bastonne, was removed, no loss there then.

Now the thing that surprised me about the new codex is all the little things I didn’t realise when I first quickly glanced over it, that really do make all the difference over the course of the game. The biggest (at least to me) is that Primaris psykers (who are now advisory) can have divination, so they can give prescience to units of the guard, which will boost the ability of the army amazingly. They can be upgraded to level 2 as well, so you could get a handy second power such as full BS overwatch, (plus the re-roll form prescience) or a 4++ save. Unfortunately you can only have 3 but they will sway whatever corner they are in to your favour.

Conscripts, the guys no one rated all though 5th, now cost 3 points a model, a unit of 40 plus a commissar isn’t out of the question and will just take and hold any objective no questions asked. Yes they suck, yes they will die, but for way, 145 you can have a stubborn, leadership 9 unit who, even if they fail that will then lose a single model and stay in place. 145 points to take and objective and keep it? That will make all the difference in the relic.

Priests now are useful as they have the ability to affect a unit more than just making them a little mad at the enemy, re-rolls to wound or armour saves, not a bad ability for around the 30 point mark.

Finally the special wargear open to the guard is quite useful as well, you get a boost to orders making all doubles inspired tactics, giving you more orders. And another item which gives units within 6 preferred enemy, which I quite like for not that many points.

After reading over the codex I have to say that while this codex isn’t bad, it’s very much just a repackaged 5th edition codex. Yes some things have been stripped out, others have been given a little boost, probably meaning it’s at about the same power level as it was before, Which isn’t exactly a bad thing, no codex should be the one codex to rule them all. They should have some semblance of balance, and I think this one is just that, balanced.

It’s just a little irritating that they had an opportunity to fix some issues, mainly the who leman russ being heavy, being the biggest. I agree they should be heavy but come on, give them the old lumbering behemoth rule back, they need to be able to shoot the battle cannon and heavy bolters at full BS, otherwise what’s the point at all? Very disappointing. They have made a few rules changed which seem a little odd to me, an example being the psyker battle squad who are now called wyrdvain psykers, are brotherhood level 1 and can take normal powers. I see why they did it, streamlining and all that but they now seem out of place and potentially a waste if taken. Still I’m probably missing something glaringly obvious.

In a day or two i will probably mess about with making an army list for you all.

Anyway any questions feel free to ask and I will attempt to answer your questions. Hope you enjoyed.
Posted by Malduran
Labels: Article