Renegades vs Tau 2k: Allies from Beyond

In an experiment I try out a new list, involving Daemonkin as well as renegades and I'm once more playing against Tau. The mission is Tactical Escalation with hammer and anvil deployment.

Herald of Khorne – 75
loci of fury

Rolling for mission we get Tactical Escalation, so each turn we draw more cards. We place objectives then roll and get hammer and anvil deployment. Rolling for deployment zone the Tau wins and selects one, then wins the roll for deployment and has me deploy first.

My deployment has the tree large units spread out across my deployment and the Herald joins the infantry command for some added hitting power. The mutants on the right hand side as well. I place the cultists on an objective and the command chimera in the centre. Holding the centre as well the defiler deploys just behind the infantry. Both soul grinders, the Blood slaughterer and blood letters wait to enter via deep strike.

He keeps everything in reserve apart form the 4 drone units which deploy in cover at the back of his deployment zone.

I take the first turn (I should have just handed it over to him). 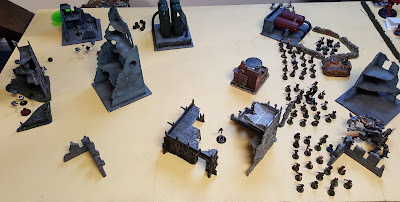 I move up as quickly as possible, the defiler takes the objective that the infantry abandoned.

Every one runs forward apart from the defiler who battle cannons a unit of drones and kill 3 of them, leaving 1 alive. The chimera tries to take down some more but the drones pass their cover save. 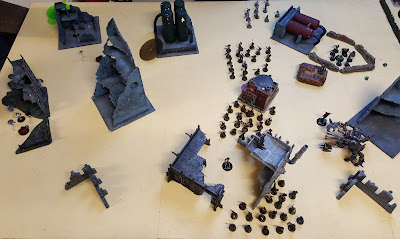 The drones hold their position

Coming in from reserve the blood letters appear next to his deployment zone near two objectives backed up by a soul grinder, and the Blood slaughterer scatters but arrives in the open next to some drones. Again every one moves up apart from the defiler who holds his objective.

Shooting from the soul grinder scatters off a drone unit and the harvester cannon does nothing. Also the defiler misses, not a great turn for scatters. The infantry run up. 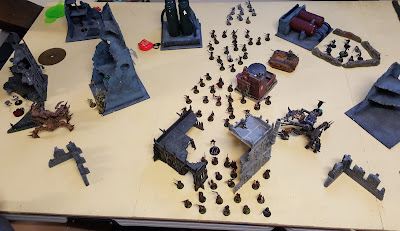 The real tau finally show themselves, the commander deep strikes in in the middle of the table, while the riptide comes in by the blood letters. The heavy thud of the broadsides announces their arrival at the back of his deployment zone. One unit of crisis suits arrive behind the cultists holding an objective while the other 2 appear by the large renegade units. Not wanting the bloodslaughterer to kill too much the drones move as close to it as possible forcing it to attack them, and another unit of drones blocks the soul grinders approach.

In my deployment zone the crisis suits kill all of my cultists with ease gaining first blood, while the suits in the centre target both units and deal heavy casualties, one unit losing 10 models, the other loses 6. On his own the commander kills 7 mutants with ease. Broadsides target the blood letters and kill all but 1, who still holds the objective. Drones hit the soul grinder with marker lights and fire a seeker missile at it, taking a hull point off it. To finish the riptide kills 7 more renegades.

Assault phase and the suits jump around. 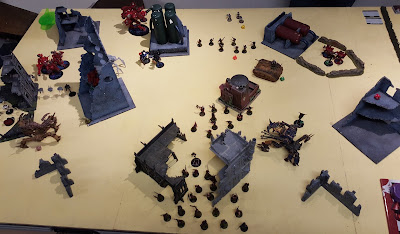 The soul grinder doesn't make an appearance, so the infantry close in on the battle suits, apart from the untouched renegades in the ruin who hold their position to fight off the tau.

Battle cannon fire from the defiler tries to take out the battle suits who killed off the cultists but they both make their cover saves.

Assault and the soul grinder charges into the drone wall In front of it destroying them with ease. The blood slaughterer is forced to do the same making very short work of them. The unit of renegades lead by Herald of Khorne charges into the closest battle suit unit and the herald dispatches them on his own. As the mutants are in 12 inches of the rip tide they have to charge it, and they get gunned down before they make it. 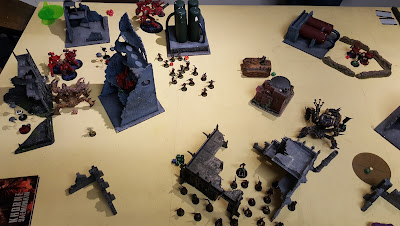 One of the units of battle suits jumps behind the soul grinder, while most others just move away from the renegades. The commander keeps on flying towards the middle of the table.

Shooting into its rear armour, the battle suits wreck the soul grinder. He attempts to take out the bloodslaughterer with the broadsides but only deals a single glancing hit. Firing everything it has the commander kills off a smaller unit of renegades. The riptide kills off 5 more renegades while the suits that escaped the defiler wrecks the chimera.

Assault and again the tau Jump Around (jump around)

Finally ripping though the warp, the soul grinder comes in much the same place as the first. The few remaining people move up apart from the renegades in the ruin. My command move into the wreckage for a cover save.

Firing from the ruin, the renegades target the flying commander and manage to deal 2 wounds to him, but he stays in the air. Again the defiler tries to take out the battle suits close to it, but only kills 1. The new soul grinder misses with its phlegm. The drones attempt to kill off the drones closest to the blood slaughterer so it can charge the rip tide but I only kill half of them and they hold their ground.

Assault and the blood slaughterer kills another unit of drones. 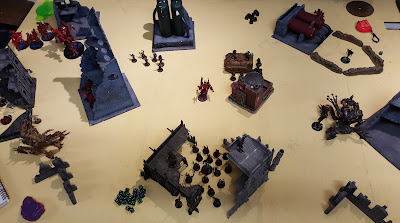 Deciding the moment is right, farsight and his bodyguard come in behind the defiler and scatters back a few inches. His commander flies over my command unit and the lone battle suit moves to target them as well. Doing their trick again the suits jump behind the slaughterer this turn. Again the drones play speed bump. 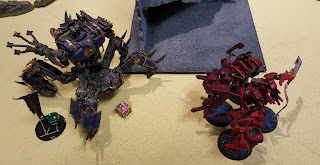 With ease the commander kills the command squad off but my warlord stands tall over the bodies. Shooting from the lone suit deals 1 wound to him but he's fine. The other suit unit again wrecks the slaughterer by shooting it in the rear (I should have learnt). The riptide targets the unit lead by the herald and kills off the unit and wounds the herald, but he still lives bloody but angry. He really wants to slay the warlord, the broadsides shoot at the warlord but fails to do anything. Farsight and friends shoot into the rear of the defiler and take 2 hull points off it, but it lives, and at the end of the turn he runs for it.

Assault and the tau do what the tau do, jumping about. 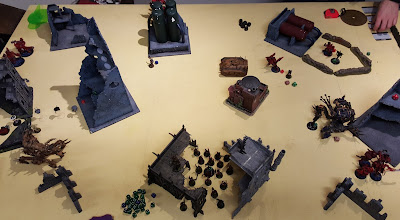 I finally use the blood points and give all daemonkin units Rage. The warlord rallies and stands ready to take on his attackers. Turning around the defiler faces its adversary.

The defiler bombards farsight and friends and kill off 2 of the bodyguards.

Assault and the soul grinder and lone blood letter charge into the drones blocking their path, and some how only kill 2 and the bloodletter dies. The herald charges the closest suit unit and gets shot down. I charge the defiler into farsight and forgot he has armour bane... and he cuts down the defiler with ease. 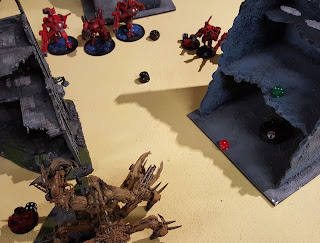 Farsight moves towards my warlord while the riptide moves into the middle. The commander drops out of the sky towards the renegades in the ruin.

Shooting from farsight kills the warlord, and the commander and riptide kill 9 of the renegades in the ruin. Broadsides target the soul grinder and glance it.

Assault and the tau jump about. 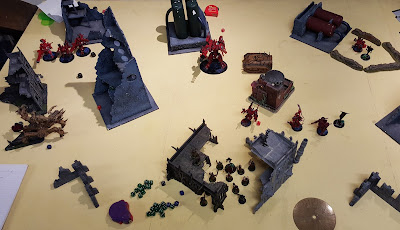 We go to see if the game carries on...

The grinder gets as close as possible to the broadsides but wont make it into assault.

Shooting from the renegades deals another wound to the flying commander but he lives.

As the grinder wasn't going to make it, he charges the suits next to them instead and makes it, killing them both. 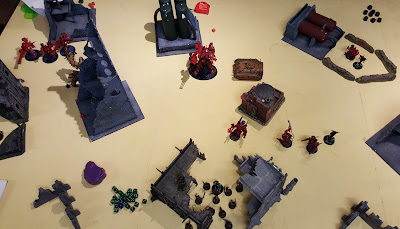 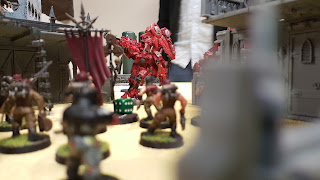 The commander and farsight double team the renegades, and the broadsides move trying to get past the soul grinder.

In a desperate attempt to broadsides try to take out the grinder but fails to do anything. The commander shoots at the renegades and kill a few including the champion.

Assault and farsight fails his charge. 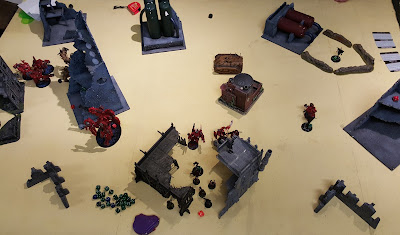 The game ends here. With a victory to the Tau.

Well that didn't go how I expected it to, I though I would have done a lot more damage, but sneaky play by my opponent and straight up misusing some of my daemon engines give him the game. One of my bigger mistakes was leaving the blood slaughterer unsupported so it had to charge what ever he put in front of it, if he had started further back with the support of the infantry they could have stood more of a chance to either block a path or shoot down the drones before they became such a problem.

Throwing the defiler into Farsight was a mistake as well, but I didn't really have much option. Maybe I should have moved up the defiler from the start, to aid the renegades? Really i'm not sure, I will have to play around with this more to learn how to use him. Either way I squandered the ability from the daemonkin book only using it once.

This was just a test using the Daemonkin, I think I will just use renegades in the future, with Daemon allies, the nurgle really do stick around longer, and I missed using the Leman russ battle tanks, they aren't great but they do have their uses. For now I might take a step back from playing with the renegades and just paint them for now, and crack the Eldar out for a bit. Sometimes you just need to try something different for a while to get a better perspective. As right now I have no idea what to do with the renegades.