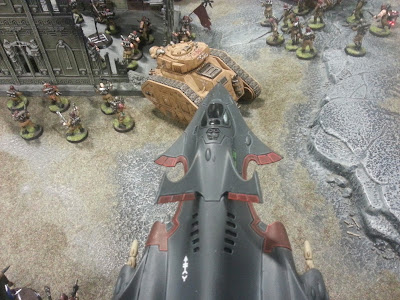 Farseer (Warlord: re-roll 1's to save)
jetbike [fortune, guide, doom, not sure]

This list is rather harsh taking just the best units from the eldar codex, so it could be a rather big issue for me. I need the zombies to hold a knight up for ages and maybe take out a lynx in combat. Its going to be a hard fight.

For the mission we were given Contact Lost with dawn of war deployment. So grabbing objectives is very important, luckily I have the bodies to do it.

Eldar win the roll to deploy first and select to. The wraithknights set up in the centre with the bikes supporting them. Dark reapers set up in the building with the objective and the lynx deploys on the right and the crimson hunter starts in reserve.

I deploy my battle tanks on the far left as it will have range on everything. The medusa and zombies deploy in the centre with the plaguebearers on their left. On the right the infantry all set up with the command squad at the back. On the far right the chimera and demolisher deploy. I keep both of the soul grinders in reserve and infiltrate the nurglings. I infiltrate the nurglings onto an objective on the left. 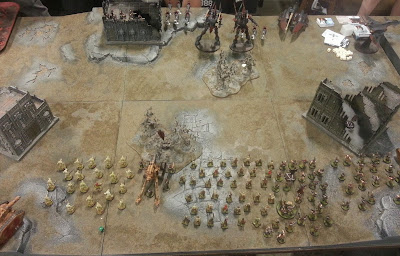 For this table the special rule is you draw an extra objective card each turn, not every exiting, but there you go.

Both of the knights jump forwards, the sword knight goes on the right while the other stays in the centre. The bikes move about a little.

Bikes on the left target the nurglings but they go to ground and take no wounds. In the centre the bikes take a single wound off the medusa . On the right the wraithknight runs and the other target a battle tank and takes a single hull point off it and shakes it. However the lynx then wrecks it with its pulsar. On the right the bikes wreck a chimera. The dark reapers shoot at the plaguebearers but they don't do any damage.

Assault phase and the bikes jump back into cover and hide. 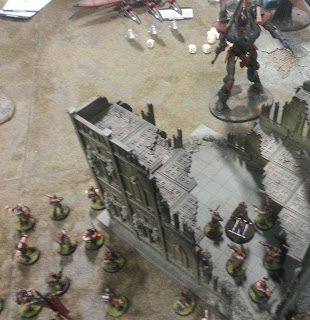 I move up with every one as I need to get in combat to stand and chance this game. The commander leaves his unit and joins up with the zombies as they will be a better bodyguard.

With the farseer hidden I try to take him out with the medusa, it locks on but he looks out and a bike dies. The battle tank targets the lynx but the holo field stops the shot. Shooting from the chimera and demolisher target the lynx as well but do no damage.

Infantry attempt to charge into the closest wraithknight but they fail the charge. 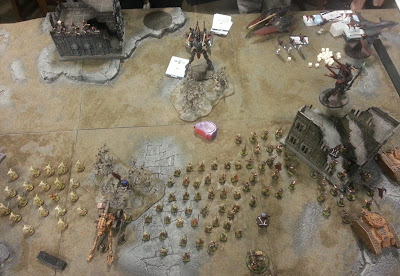 In from reserve the crimson hunter comes in and goes for the battle tank. Again the bikes move around and the wraithknights move back.

Again the farseer casts fortune but this time on the farseer on his unit and guides the heavy wraith cannon wraithknight.

Swooping in to attack, the crimson hunter shoots at the battle tank but it only does a single hull point of damage. Bikes all shoot at the plaguebearers and 3 die. Even with guide the wraithknight only this with a single hull point, meaning the lynx diverts its fire power to finishes it off. Using their starshots, the dark reapers bring down the medusa but the crew survive.

Again the bikes move back into cover.

Gotta keep on moving forwards as he out ranged me now I have lost all my long range guns. Nothing comes in from reserve.

A few lasgun shots are in range of the bikes on the right and I bring down 2 of them. The rest of my force does nothing. The demolisher tries to damage the lynx but again the holo field stops the shot. 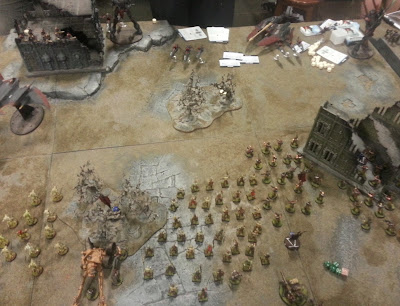 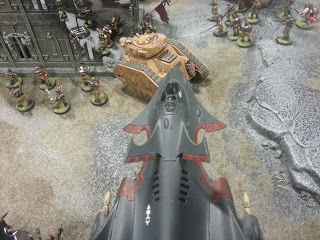 Realising that I am getting to close he moves the wraithknights back and the bikes scatter around the table. The crimson hunter turns around and goes after the demolisher.

Again he cats fortune on the farseer and attempts to doom the plaguebearers but it manage to stop it.

Both the wraithknight and crimson hunter shoot at the demolisher and they both just take a single hull point off the tank, and immobilise it. The bikes and lynx shoot at the plaguebearers and kill off most of them, leaving just the herald and 4 daemons. 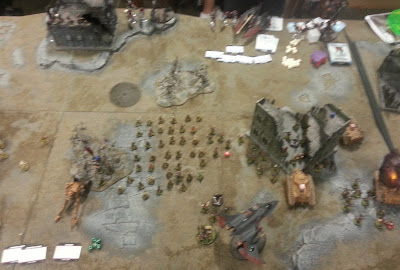 The herald of nurgle attempts to smite the dark reapers but he fails to cast it.

Shooting begins with the soul grinder targeting the lynx and he takes off 2 hull points, 1 with phlegm and 1 from the harvester cannon. Chimera fire takes a third point off it. The demolisher is unable to do any damage.

Again his bikes move about to get a few shots in while the wraithknights go after the soul grinder. Carrying on its course, the crimson hunter goes for the rear of the chimera.

Delving into the warp the farseer casts both guide and fortune on the wraithcannon wraithknight. Shooting into its rear the crimson hunter explodes the tank.

Finishing what they started, the bikes kill off the daemons. Using their startshots, the dark reapers glance the demolisher and wreck it. The wraithknight takes 2 hull points off the soul grinder. A little excessive but the lynx targets the zombies and kills off 10 of them.

Both wraithknights charge into the soul grinder and wreck it with ease. 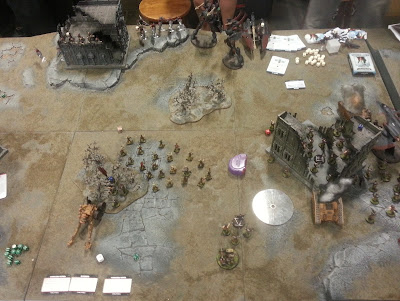 Once again the soul grinder mishaps and goes back into ongoing reserve. The infantry move closer to the lynx.

I don't have much to do so I fail to do any damage as the chimera fails to hit the lynx.

Charging and the infantry roll a double 1 and fails to charge the lynx.

The bikes go after the zombies while the wraithknights spread out.

Finally the soul grinder finds its way into the mortal realm, son of a bitch was probably getting drunk with papa nurgle or something... I was some one irritated. He appears on the left next to the farseer.

Phlegm and harvester cannon targets the farseer but it fails to do any damage.

Infantry charge into the lynx and krack grenade it and wreck it, the explosion scatters off the table keeping the infantry alive.

I pray to the chaos gods that the game ends here as I have very little left on the table... it carries on.

Shooting from the heavy wraith cannons explodes the soul grinder. Scatter laser fire tries to take down the nurglings, but they only kill a single base.

Sword wriathknight charge the infantry and kills most of them, and stomp on the rest. The bikes charge the nurglings, and kill a biker while taking 2 wounds, they hold though.

I do absolutely nothing to his force.

We roll to see what happens...

They kill the nurglings and practically all of the infantry.

Again I do nothing.

If only the game ended turn 5 and I would have won, but that's now it goes. Looking at his list I was worried about the sheer fire power he could put out. My force had a lot of infantry so I used that to take the objectives and pray I could just hold out.

I am not sure how to play that game any differently if I was to do it again. My list just doesn't have the tools to deal with 2 wraithknights. The infantry could deal with the lynx and the bikes could be taken down over the course of the game.

Well that was the end of the event, it was a great weekend with some good games and over all I won 2 games, lost 2 games and drew 1. So a very average score. But I enjoyed the weekend so what does it matter?

The way the event works is that once all the games are over, we all had to say which opponent was the most enjoyable game to play against. Then from that they ranked up first by how many of those votes we got, then from the number of victory points we got in the games. Each person was divided into one of 4 groups, Chaos, Xenos, Space marines and Imperium and then they awarded the highest scoring person of each group a Best of Award. So over all the Imperium won the whole event, and I won the Best chaos which was a surprise. Over all using this odd way of ranking every one I came second out of the 40 something people who attended.