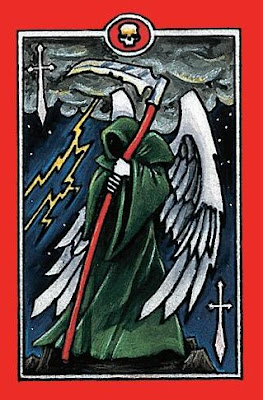 I just re-read my codex dark angels i found this little beauty. For those of you who don't know what it is, its a banner that lets all units within 6 inches make their bolters salvo 2/4. Now is it me or is that over the top? Take this with 3 units of 10 man tactical squads and hold an objective and no one is going to be able to weather 120 bolter shots! And its only 65 points... granted you have to buy a command squad to get it but i think its potentially very powerful.

Imagine a 1000 game, or something just as low. you come across a cheap HQ, command squad and then 4 units of tactical marines... that's going to be hard to shift in such a low points game. Hell in a large game it will make quite the flank holder, especially if its behind a aigis defense line.

Now i don't play dark angels (wish i did now) so what do you guys think? would this be viable?
Posted by Malduran