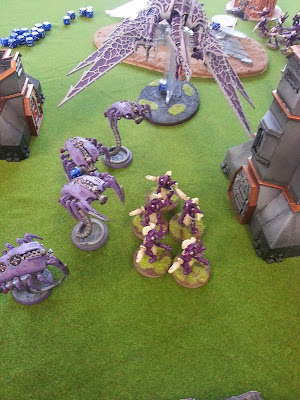 Game 2 and i'm up against Chaos Space marines with Necron allies. A lot of flyers, it has to be said he brought a lot of flyers. I have only ever played against Necrons once before and it didn’t go well, so I was rather nervous about this game. Oh and a lot of purple models were on the table this game.

In game 1 I won full points against a chaos space marine player, see here for the report.

Well that is one hell of a scary army, 4 flyers, 1 flying monstrous creature and 2 very fast and hard hitting units. Honestly I panicked when I saw the list. 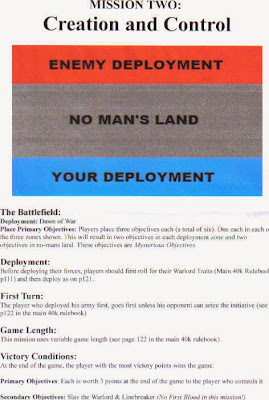 This game the mission was a 6 objective game, rather reminiscent to the old apocalypse scenario. Both players had to place 1 objective in his own deployment, no mans land, and then his opponents deployment. I lost the roll for deployment zone. We both placed our defence lines, and then rolled for first turn. I won the roll and decided to go first.

Unsure what to do, I set up centrally with my tanks, on the left side I had my warp spiders and the fire prism on the right. Dark reapers manned the lascannon backed up by the dark reapers. I placed the hawks behind the defence line ready to jump up. As I didn’t know what to do I placed the walkers and rangers into reserve, outflanking.

He placed his wraiths with destroyer lord behind the defence line, the annihilation barge was hidden from sight as was the spawn + sorcerer. The cultists and flyers went into reserve.

I cast prescience on the dark reapers. I don’t bother any more as I don’t want to risk any perils that I don’t have to. The hawks jump to the sky and I move the wave serpents and fire prism forwards, with the logic as there is such a large line of sight blocking terrain I will need to move to see. The warp spiders jump forwards as well, with a massive 18 inches (and a spider dyeing).

Shooting phase is more second movement as the tanks move again forwards, then the dark reapers shoot at the wraiths, but they fail to get past the 3+ invulnerable save.

Assault and the spiders jump again. 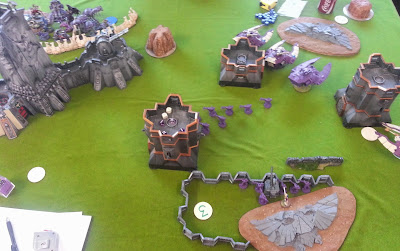 The crack of tesla lightning arcs towards the warp spiders and a single spider dies, the lighting doesn’t arc to any other units.

Assault phase and the wraiths need an 8 to catch the closest wave serpent. They make it, charge it and get 3 penetrating hits and roll explodes the tank, 3 guardians are caught in the wreckage and can’t escape. They fail there pinning test. 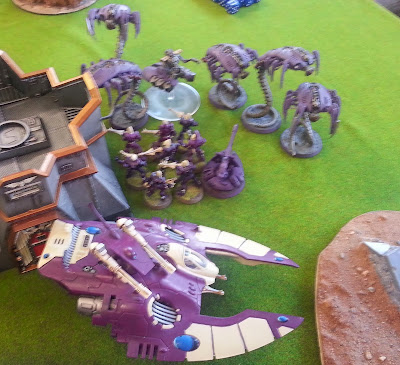 Aiming to the sky the hawks shoot at the prince and manage to hit him a couple of times. I fail to wound him but his wings suffer a puncture and he plummets to the ground but spreads his wings and lands gently at the last second. A torrent of shots comes from the spiders at the prince but thanks to his god he remains unharmed (3+ save, re-rolling 1’s is hard to crack, and no 6’s). The wave serpents shoot at the wraiths and deal a single wound to them.

Assault phase and the spiders jump away from prince. 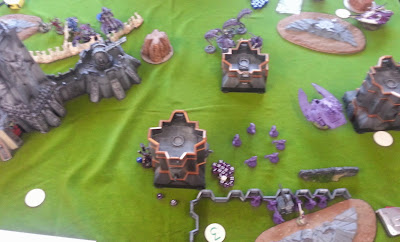 From reserve two heldrakes scream in from reserve, one going towards the swooping hawks and the other going down the middle. A single night scythe comes in on the right side of the table. The destroyer lord leaves the wraiths and goes after the wave serpent at the top of the table while the wraiths go after the warp spiders. Seeking cover the spawn go into the fortification but the sorcerer is forced to stay on the floor. Gliding low to the ground the daemon prince gets ready to charge the dark reapers. I intercept with the Icarus lascannon on the middle heldrake and only manage a single glancing hit. 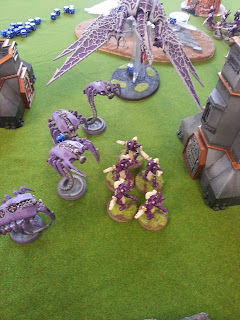 The night scythe targets the fire prism and its lightning hits my tank hard, causing it to get stunned by the force as well as stripping a hull point with a glancing hit. Flames from the heldrake on the left kill all of the swooping hawks while the centre drake kills off all of the pinned guardians.

A battle cry from the destroyer lord rings across the table as he charges the wave serpent containing guardians. He hits something important and the tank explodes, killing 4 of the guardians inside. The wraiths declare a multi-charge on the warp spiders and remaining wave serpent. The attacks manage to explode the wave serpent and kill all of the warp spiders. The prince charges into the dark reapers and declares a challenge, which the spiritseer accepts but the hammer of wraith attack kills the seer out right. I hold. 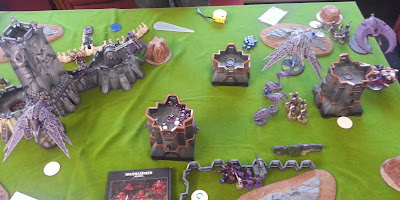 I can’t really do much so the prism shoots at the destroyer lord and manages to hit even though it can only snapshot. The shot wounds him. The guardians now in the open shoot at the lord and again but fail to do anything only getting a single hit which fails to wound. Shooting from the wraithguard at the wraiths does nothing.

Assault and the prince again issues a challenge and the farseer accepts, but he dies to the flurry of attacks. The curse of the black mace fails to kill off the dark reapers.

The 10 man unit of cultists come in from reserve, on the left side objective. He manages to keep the other unit and night scythe out with his comms relay. The two heldrakes move over the wraithguard who are now in the open (well the wreckage of their tank) and vector strike them, killing 3.

Flames from the sky drop on the wraithguard from both heldrakes but only a single construct gets destroyed. Lightening from the annihilation barge hits the fire prism and it explodes.

Assault phase and the destroyer lord charges into the guardians, they fail to do any damage with overwatch and in combat. 2 guardians die to the lord and the rest run for it and escape. The lone wraithguard gets charged by the wraiths and is over whelmed, without taking any necrons with him. The on-going combat between the prince and reapers ends with the prince smashing the reapers into the ground. Thank god the guardians didn’t get cut down as I’m not tabled, allowing my war walkers and rangers to arrive from reserve. They both arrive on the left side of the table and I place them at the top to kill the cultists. The guardians rally and face the destroyer lord.

Shooting from the guardians does nothing to the destroyer lord, but the rangers and walkers fair a little better killing 6 cultists, they hold though.

Shooting from the new cultists kill 2 guardians, they then get cut down by the night scythe. On the left side of the table the walkers get wrecked by the annihilation barge, rolling 2 6’s on the hit. They never stood a chance.

Assault and I get tabled by the spawn murdering the rangers under the unrelenting number of attacks.

Well that game went downhill very quickly; I made so many mistakes this game I was on te backfoot before turn 1 even started. AS I got tabled I received 0 points for this game and sent my opponent straight into the lead with 2 victories and full points. For those of you interested he went on to win the tournament, so I don’t feel too bad about the loss. But I could have done a lot more to fight back. Where did I go wrong?
·        First turn: I selected to go first, I shouldn’t have done that. As it was an objective game with night fight and only 3 units on the table turn 1 I should have selected to go second. It would give me time to react; hopefully I would be able to draw him out into the open to shoot him first instead of running into the meat grinder.
·        Deployment: I wouldn’t say my deployment was terrible but it had a lot to be desired. As his defence line was in the corner and hidden I should have castled up in the opposite side of the table with the greatest lines of sight.
·        Movement: Why I moved straight towards him instead of hanging back and shooting I will never know. It meant he could vector strike me straight away and I was in assault range! If I had stayed back and waited for him I could have had a chance to shoot down his flyers. Such a massive mistake.

Sometimes you just need to get your head kicked in to be able to learn and develop tactics. This happened to be one such time. So I now plunge into the middle of the rankings. My next game is against a Chaos Daemons list with Chaos marine allies. Place your bets now…
Posted by Malduran
Labels: Battle report - 40K, Eldar