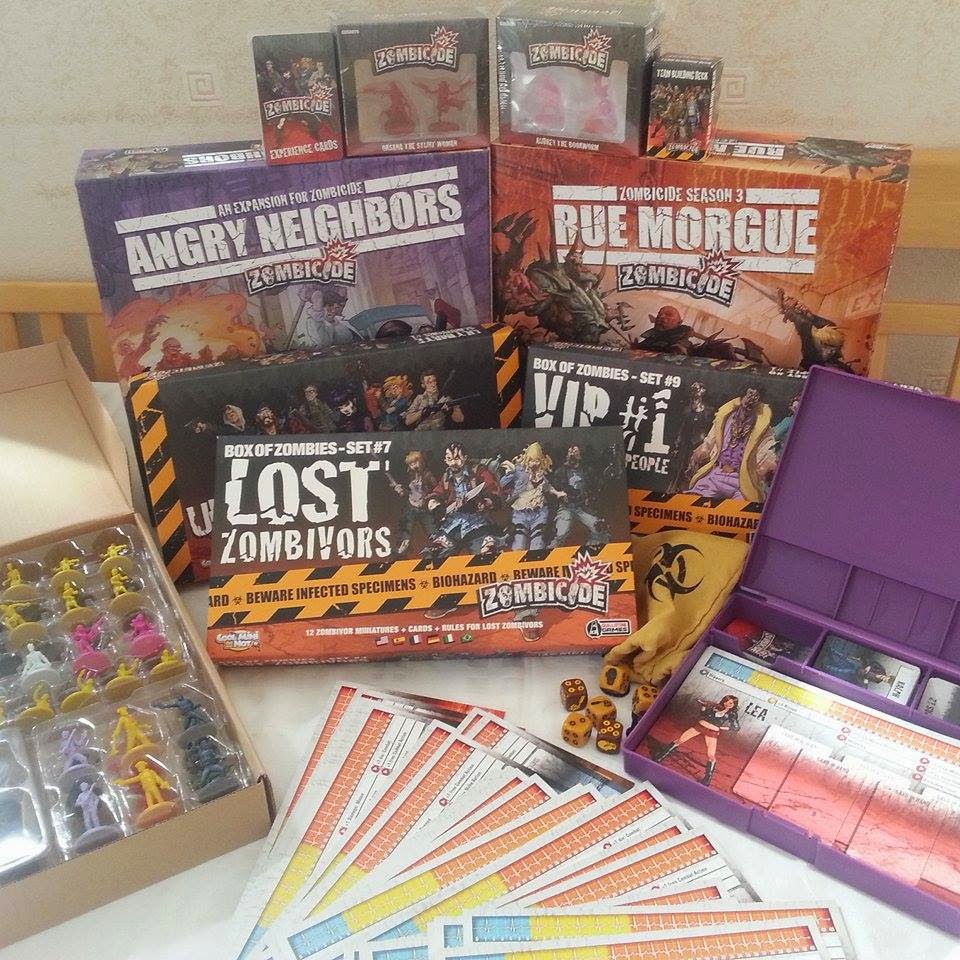 Finally after many months of waiting, my package has arrived from backing Zombicide season 3 on kickstarter. And how happy I am that I did, all of the new items truly are amazing. So I thought that I would show you all some of the new rules, models and general fun that will await you all in the future.

Many months have passed since the zombie outbreak occurred, and many millions of people are dead or turned into the zombies plaguing the world. Food and supplies are running short for the survivors making them more daring and having to band together in order to survive. This has made groups form and they aren't very welcoming to others, especially when they are after the very same supplies. This has made the survivors you play much more rugged, cautious and hardened. No longer are we playing as people desperately trying to stay alive, banding up with strangers in a world ravaged by the dead, with no idea what's going on and only luck aiding them. We are now experienced zombie killing machines with the skills to hunt down zombies who have worked together to kill zombies for months, and find what they need to survive. But that's not all that has changed, with most people being killed or turned into zombies; the zombies are starting to show differences too. Not having eaten for a while, the zombies are looking much leaner, and harder. They are also becoming more resistant do damage, even when blown in half the torso with still come crawling after you. The new abomination called the A-Bomb, can only be killed with fire, blowing chunks out him (or her) will do nothing. This is the world we live in now, and teams must work together to survive.

In this new game we have 12 new survivors to play around with, all with something new to offer to the group. Of all 12 only a couple tread on existing characters toes (by existing, I mean none promo) and all end up rather unique when they hit the red level. Some new abilities have been made such as sprint, which helps characters move around quickly, and scavenger so you can search where ever you want. But don't forget the new skill helicopter pilot, because helicopters are a thing now.

Focus has now been added on team work in a big way. Once a turn someone can call a team action. There are 3 possible actions, which allows everyone to either move into or out of a square, charge into a zombie and club it to death, or shoot. This is a free action and can affect every one nearby. However you can only choose 2 of the 3 before the game, so it could be a very important choice. But this new rule has saved the group in the few games I have played so far. When a massive horde has just attacked you and you need some extra shooting calling a SHOOT! Team action can help thin the horde before it gets out of hand. If you are running from the zombies the MOVE! Action can give you that little bit of extra movement that could get everyone to the exit to escape. It really is a good new little addition.

Some of the core rules have been modified a little to mix up your Zombicide experience. How we spawn zombies now is a lot more random. Instead of the steady stream from all of the spawn points we have had in the past, we now roll a number of dice depending on how many starting survivors you have. The number rolled represents a spawn point and then you draw a card for each spawn point. So you could have a steady stream from all of them or with an especially unfortunate roll have all of the zombies appear on one spawn point. I feel this is a brilliant touch as that little bit of randomness makes the spawn points especially scary. No longer will you wait a single space away from them, ready to gun down the few that appear, as now that could be suicidal.

Another new rule is an event token, which means as soon as you step onto a square you spawn zombies, kind of like an ambush that you can see coming. But it also means that if you can avoid it, you can stop zombies from spawning and make life a lot easier. Most of the time this is used when you have to explore a large building, so when you open a single door you don't spawn the whole thing, it brakes it up so you have a chance of living, but also that later on you get the harder level spawns.

Overall these changes have been a great way to spice up zombicide and make it fresh for every one again. There is also a competitive mode which I haven't tried yet, so that can be a post all of itself in the future.

Along with the new game, I paid for the expansion pack, angry neighbours. This little expansion adds in a few more new characters as well as a new zombie type and new companions. The new characters i'm not too fussed with, they seem like weird watered down versions of what's already gone before (and possibly based on real people who put in a lot of money last kickstarter) but that's just personal taste.

The zombies however I like the idea of, they are called seeker zombies, and their special ability is that whenever you pull out another seeker card, all the others get an extra activation. This can make them especially fast and dangerous if you get a couple of cards one after another.

Another addition is the companions, we have had some before in the form of dogs, but now we have human companions. There are 4 different people you can find who range from giving you extra dice with weapons to being able to use them to open doors silently for an action. While I have no experience using these guys they look like a cool little addition to a game, even if it is something else you have to remember. The downside of the companions is they take up an equipment slot in order for you to be able to boss them around, and only the person with their card can tell them what to do. You can still trade them as they are equipment so someone else can then become their master in a strange kind of post-apocalyptic slave trade. It’s odd but it’s there.

It also adds in the rules for zombivores again, as rue morgue doesn't contain them for some reason. While i'm not the biggest fan of resurrection mode and I rather enjoy playing without it, it feels strange that it’s not included in the core box of season 3.

Well that's the review part of this done, I would like to share how I feel about the game. It's awesome, maybe I am a fan boy, but it really does play out really well. Its enjoyment mainly comes from working together with friends to try and survive. Co-operative play vs the game brings up some very interesting challenges as you just never know what's going to happen, if it was vs a player you might be able to work out patterns but with this you have no idea. The change to spawning with random dice was a nice addition as it makes the spawning feel more like horde attacks rather than just a mechanical zombie spawning device.

More characters to play with is always nice as it allows more variation in games, but I feel if you allow people to select from the whole pool of every character ever you will eventually end up with a very similar team. If the mission means you have to search; maybe the team starts to go more for slippery characters. Lots of open spaces; then maybe everyone with the ranged perks come to the front. Still as long as you just pick who you like and not start picking for the mission it should still retain its fun.

I haven't used the helicopter much yet but in the few missions that we have had it, it always seems to take focus away from the game, especially if you have a full transport. Having 3 people sitting there not doing anything for any number of turns takes away from the fun and it draws the zombies to them if you aren't moving around much. While this is a useful tactic if you start to get swamped, it can become a crutch. I like it as an objective though and maybe using it a little bit is still fun.

Overall I think this game is better when taken in isolation without adding in too much. The missions compared to the other are really great, much more thought out than the previous missions as they have had more time and experience than in the past. If you are on the fence about this game I couldn't suggest you give this or one of its previous incarnations a go. It truly is a fun time for you and friends. However as it is cooperative you need a large number of people to play, especially in this one as its 6-12 people, which can be hard to get enough people for a game. Still, a great night in.