Not even death can save you from me... Orcs vs Daemons 2k 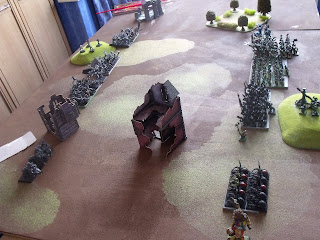 Well yesterday i ended up having an unexpected battle vs my mates daemons of chaos. Just a little friendly game of 2000 points and nothing competitive just a bit of fun.
To start of here is my army list: 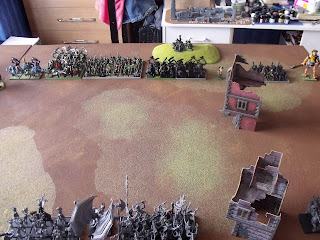 And the daemons army list something like this, i unfortunately cant remember exactly what all of the upgrades were for each unit. 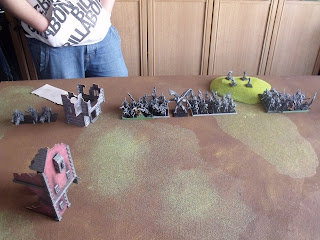 So the battle field was very sparse today, woods on the far right and some buildings on the left. Scenario was pitched battle and nothing special was going to be used. We rolled for set up and i won forcing him to start deploying first.

Turn 1
Not much happened for the first turn, the Herald of Tzeentch cast throne of vines, and flesh to stone on the blood letters, but all other spells were stopped.
My turn started very productively with both my Big Un's with great shaman and Boyz with Warboss and Bsb failing animosity and squabbling over who gets to kill more daemons first... well done ladz. The N Goblins and  trolls shuffle forward staying out of charge distance waiting for the rest of the boyz to catch up, while the spider riders protect the giant by reforming in front of it to prevent any unsavoury charges from the fiends.
(Note: i made a stupid mistake here, instead of setting the goblins up so fiends would overrun them and expose their flank to the giant, they would only still be facing the giant... i love tactics, idiot). Magic phase was a little more interesting with all my spells being shut down apart form one, Warpath of Gork, which attempted to stomp on the daemon price (thinking about it i should have gone for the flamers... love hind sight) which failed to do anything. Then the fun, rolling the dice, 1. So my opponent targets the big un's with gork but luckily he slips and scatters off the unit. Got lucky there. Shooting and my rock lobber kills a hand full of horrors.

Turn 2
The fiends charge the spider riders and the price moves to try to threaten the big un's flank. On the right of the board the blood letters slowly move forward as do the Plaugebearers. The flamers jump forward and flame the trolls killing two of them. Magic phase and shield of thorns was irresistibly cast on the fiends and flesh to stone got though, the rest was stopped bar on tzeentch spell which killed the lone goblin shaman (no great loss). Combat saw all but one spider riders die who fled like a boss. But the fiends fail to restrain and flee 2 inches in front of the giant.
My turn and the boys start to behave them selves. The giant charges the fiends and in a surprise attack the goblins charge the plaugebearers with a staggering charge of 15 inches. Get in there ladz. Now he didn't expect that. The orcs catch up to the trolls who move to the side so who ever get charged by the blood letters will get aid from the other unit in the flank. Now provided nothing goes terribly wrong i should be ok. Magic and very little happens again, as warpath failed to cast this time leaving me with nothing to do with my left over dice. Combat saw the most unlikely event of the giant being killed by the fiends before he could even swing. Luckily even in death he was useful falling onto the fiends killing one (wooo for multiple wounds D3). The goblins net the daemons and some how kill 6 of them. They take very little casualties in return due to the nets.

Turn 3
The fiends charge the rock lobber attempting to silence it, as the daemon price charges the big uns. Skulltaker and the bloodletters fearlessly charge the orc boys regardless of the trolls on their flank. Magic and the Herald   failed its first spell practically ending the daemons magic phase. Once again flamers shot at the troll managing to reduce them down to only 3 left. Combat and the fiends made short work of the rock lobber, and the price takes his toll on the big uns who luckily pass their brake test due to the nearby battle standard. Unfortunately the N goblins net themselves this time and cause a measly 1 casualties on the plaugebearers and take a monstrous amount of damage back but hold thanks to steadfast and the near by general. Skulltaker issues a challenge and the orc boss foolishly accepts so that the bigger boys could swing away at the bloodletters. Unsuprisingly the boss dies and gives up a stupid about of overkill but its to be expected. The orcs take a few casualties (maybe around 6?) from the hate fueled bloodletters and only manage to kill a small number back. But once again steadfast and the local bsb save my ass.
My turn... and those bloodletters were not in trouble... or at least they would have been if it wasn't for rolling 11 for there stupidity then a mighty 12 on the re-roll. Some time mork
Shooting and... oh wait. fucking fiends.
Combat and we see much of the same really, the Price chopping up some big uns while the shaman bounces of his ward save and the gobbos being in a titanic struggle with the daemons of filth... it was truly terrible to watch, now i don't expect much from my little gobbos, hell if they survive its a damn miracle but the fact the plaugebearers were dealing out as little damage as i was really surprised me. Both units stayed how ever do to a lucky insane courage and the beauty of having steadfast respectively. Now onto the interesting fight, once again skulltaker issues a challenge with a mighty roar, but this time my Warboss steps forward confident in his tricksy trinket. I had a feeling i had a chance, with a 4+ ward i had a shot, and if he didn't kill me i would be able to brake skull takers face with his great weapon.... but obviously one KB gets though and to rub it in a 3 appears for the ward. Never mind its only my general. The bsb still lives and keeps the boys still in the fight.

Turn 4
Now the fiends reposition themselves to rear charge the big uns next turn (seems pointless now as i only have a handful left thanks to teh prince) and the flamers move to better flamer there trollish pray. Magic and the herald miscasts as he casts flesh to stone on the prince (makes little difference to me) killing himself. Well that's one less worry i guess. Shooting and the trolls are burn to ashes with a lucky roll and one remaining troll decides to run for it while he is on his last wound. Pfft i never liked my trolls any way.
Combat and this is the turn my army turns to mush, the price reduces my big uns to almost nothing who in turn once again do no damage and run for it, and the orc boys get there face ripped off as skulltaker claims another skull... this time from my friendly bsb who only ever waved his flag in peace (or so it seamed). The only small victory i could claim was my night gobbos who once again win combat killing a unexpected 7 daemons. God i love nets now.
My turn and as all my units are running apart from my gobbos it was a nice quick turn for me. I reduce the plague daemons down to almost nothing and wait for the rest of the daemon army to kill them.

Now we didn't bother figuring out victory points as it was quite evident who won... i got dominated. Now looking back over the game i cant help but feel that i did have a few spots of bad luck but the major reason i lost was bad deployment and terrible tactics. Thinking about it now, having the goblins in the center of the battle line may have been a bad idea, and not targeting the flamers proved quite fatal as they single handed burnt the trolls. But at the moment I'm still quite stumped on how i could have played better. If anyone could give me some advice that would be great.
I have to give my man of the match to my N gobbos as i don't normally take nets on them as 45 points seems very expensive but as it allowed them to hold up the plaugebearers for the entire game i think i will be taking them a lot more often in games. Unfortunately the Big un's were very disappointing for me, this may have been due to the failure to get them stuck in with anything they could have actually hurt, but even so i don't think i took enough, 3 ranks of 8 was an odd number for me to take. More of them next time maybe? i will have to experiment and see.

Anyway that should do for now, as my first battle report i apologise for the jumpy nature of my writing but I'm sure that will smoother out as time passes.