Encounter in the waste... Eldar vs Chaos space marines 1750 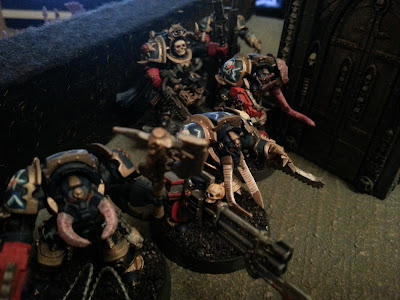 I was invited to play on a friends new table, and to christen it properly we would have a large game, 1750 points. The game type was Capture the Relic with dawn of war deployment on a stunningly beautiful waste land with a toxic river running though the centre. Click to read.

This list was based around the ideas that my 1000 point tournament list used, hit hard with many strength 6 shots and move fast. If it didn’t have a 12 inch move it wasn’t in. I was quite happy with the result with the list. I know the hawks don’t appear to make any sense but in the tournament I never got line breaker, they are there to try and fix that little issue I faced.

Chaos space marines (i don't have an exact army list, so I’m sure i will be missing some upgrades for each unit)

5 Possessed
gift of mutation (turns into a spawn)

A very small army for this points level, but the terminators, 2 chaos lords and 2 ordinance weapons can still pack a bit of a punch that i have to watch out for. If i can shoot him to bits first i will be ok, if he gets into combat, i will defiantly die. And to make matters worse i have to watch out for that single spawn.

The battlefield was a bit of a surprise when i got to his, the table was not quite the size i expected, nor what i am used to. But different table sizes just make for different and interesting situations in a game, plus the table looked great so i can't complain. The mission was the Relic, and deployment was dawn of war. As the table was approximately 4 x 3 we decided to only have 6 inch deployment zones so there was still a gap of 24 inches between deployment zones.

I won the roll to set up first, and set up guardians on opposite sides of the table, both flanked by war walkers and then vypers in the centre of the table. I would have set up the tanks, but they couldn't fit on the table. As they were staying off the table i decided to keep the hawks (deep stike) and spiders in reserve. The army didn’t have the room to do what it was designed for but I can improvise.

He then deploys the small squad of marines in the ruin, the plague marines in the centre, the defiler on the right hand side. the vindicator was placed by the ruin and the possessed between the defiler and plague marines, as does the spawn. The lord and terminators go into reserve to deep strike in, Typhus also goes into reserve to deep strike in on his own.

To start I cast both prescience and forwarning on the large war walker unit, the vypers move a little to get jink and that was it for the movement phase. 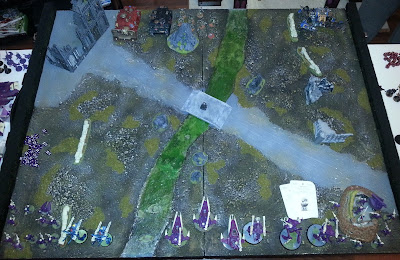 The rhino moves forwards 6 so its passangers can drive by, the spawn runs forwards towards the war walkers. Going for the relic, the plague marines move forward.

Havoc launcher ready, the rhino shoots at the guardians on the left, killing 5, setting they on fire with soul blaze (which kills an extra 1 at the end of the turn), but they hold. The marines in the building shoot at the small war walkers and the heavy bolter wrecks a walker. He then realises he forgot to move his vindicator as it was out of range of the guardians, but not its havoc launcher, which misses. The defiler shoots it battle cannon at the guardians on the right but thanks to cover and a lucky scatter it fails to do any damage.

Once again I cast prescience and forewarning on the war walkers, then for reserves the spiders make an appearance as does a single wave serpent. The serpent moves up the left side of the table while the spiders are in the middle.

Shooting starts with the wave serpent hitting the side armour of the vindicator with its scatter laser and making it explode (I was surprised as well). The spiders and lone war walker shoot at the rhino and get the 3 hull points off it to make it a wreck. The vypers shoot at the marines in the ruin and kill 2, while the large war walkers take a single hull point off the defiler. The guardians again wound the spawn reducing it to 1.

Assault phase and the warp spiders move back and another guardians burns to death. 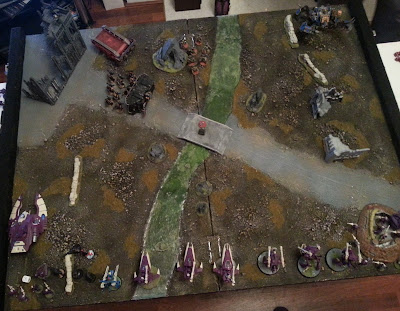 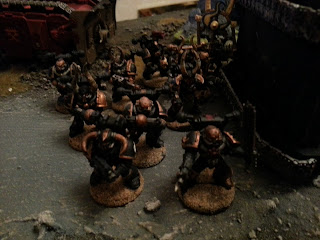 Both Typhus and the terminators come in from reserve. Typhus is place next to the farseer and guardians on the right, scatters slightly but it ok. The terminators are placed next to the vypers but scatter 10 inches into them an mishap, the roll was a 2 so I can place them, right at the table edge on the left in his deployment zone. The spawn moves to the vypers, the marines recently deprived of their ride move towards the guardians and the plague marines go after the relic.

Typhus attempts to cast plague wind on the farseer and friends but fails thanks to runes of warding and takes a wound for his trouble. The defiler hits the guardians this turn and 3 die in the explosion. With some long range shots the plague marines get a single glance on the vypers.

Assault phase and the spawn charges the vypers wrecking 2 of the vehicles, D6 + 2 attacks is scary. The flames then go out on the guardians. 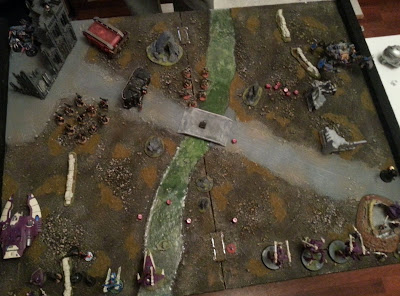 The same psychic fun happens to the war walkers, from reserve only the falcon comes in on the right hand side as the hawks did but misshaped and went back into reserve. The dire avengers get out of the wave serpent and go towards the marines. With a spawn on them the surviving vypers move away from the mutant. 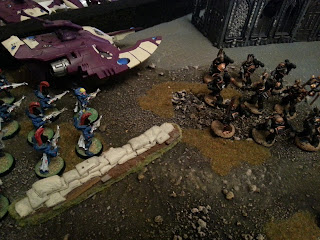 Unleashing all they have, only 2 marines die to the dire avengers shots. The war walkers stop shooting at the defiler as its doing nothing so take down 2 plague marines instead. The guardians on the left shoot at the marines in the ruin and kill an extra 2 with the scatter laser! The falcon shoots at typhus and the pulse laser manages to deal a single wound, getting past both his invulnerable save and feel no pain. 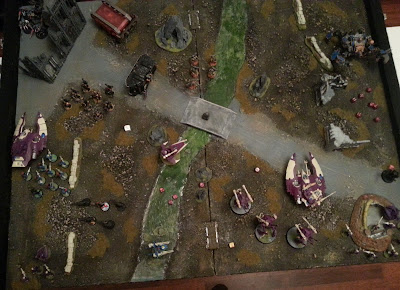 Not happy with the aspect warriors appearance the marines go after the dire avengers and the plague marines make it to the relic! Typhus moves towards the farseer.  After their slight miscalculation the terminators move forwards to get back into the fight.

Making their presence felt the terminators shoot at the wave serpent with a reaper autocannon and make the wave serpent explode! 2 dire avengers take shrapnel to the face as does a single chaos space marine. The plague marines wreck a war walker from the big unit and the defiler shoots at the falcon but it jinks out of harm’s way. Typhus attempts to cast plague wind again but again takes a wound from peril of the warp.

Combat and Typhus charges into the guardians declaring a challenge, the farseer backs off letting the guardians attack the chaos lord, taking off his last wound with some lucky rolls, slaying the warlord! On the other side of the table the chaos space marines charge the dire avengers but the combat is a draw after both sides take a single casualty. 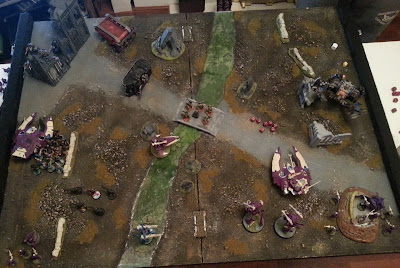 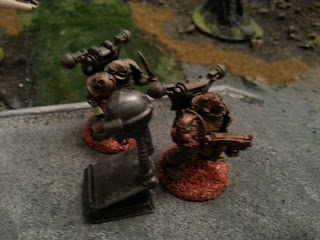 Same psychic shenanigans again. Turn 4 so the other wave serpent comes in as do the hawks who mishap again! Back into reserve. The wave serpent goes straight for the plague marines. The fire dragons get out of the falcon and go after the defiler.

The wave serpent, falcon and war walkers shoot at the plague marines and kill 3. The fire dragons shoot at the defiler and it explodes under the weight of melta fire. The guardians on the left shoot at kill off the final marine in the ruin.

Combat and the dire avengers lose a single aspect warrior in combat but fail to do any damage, this is obviously the sign they are doomed and make a brake for it and escape, the marines move towards the spiders. 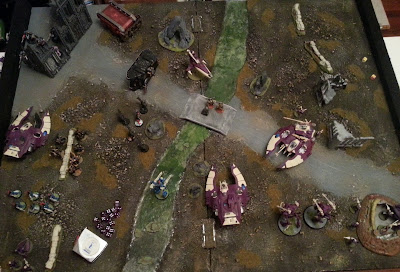 The terminators finally make it out from behind the ruin, and shoot at the other wave serpent glancing it. The marines shoot the warp spiders killing 2.

We roll to see if night fight starts: No

The hawks come in and stay in this turn, the farseer casts both powers again on the war walkers. The dire avengers get out of the wave serpent and go after the relic which is currently on the floor.

Shooting from the hawks kill off the last plague marines while the war walkers, falcon, vypers and wave serpent kill off the other marines. 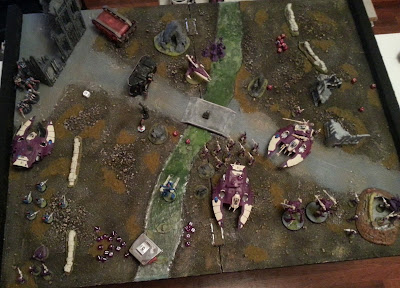 The terminators move forwards towards the dire avengers and shoot at the wave serpent but all shots fail to do anything.

We roll to see what happens and the game carries on

The terminators move towards the spiders and charge them killing them all, they are now right next to the dire avengers.

The dragons go for line breaker while the army moves around to shoot the terminators. I only kill 1.

He charges into the dire avengers and kills them all as I forgot to move them away once they had the relic. 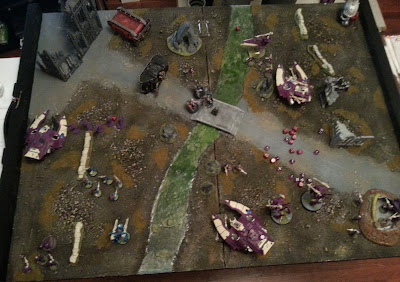 Well that went to shit really quickly and I could have lost that easily against troop terminators. I missed line breaker that game as I forgot to run the dragons and just assumed I had it, forgetting we only had 6 inch deployment zones. Over all I feel the army did well considering the army was meant to win with manoeuvrability, apparently just fire power Is enough. The turning point was defiantly when he misshaped with his terminators, if they had hit my lines it would have been game over for me, having to deal with them and everything else would have been too much for me. While I technically won this game, if we replayed it I doubt it would be the same result. Next week, back to the evolving list, it’s been neglected of late.

It is a very nice table though.
Posted by Malduran
Labels: Battle report - 40K, Eldar