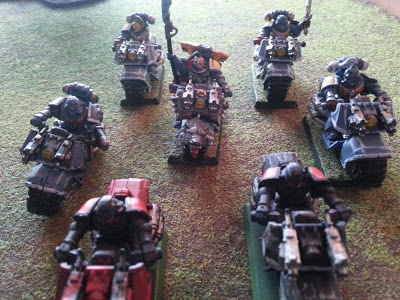 After about 2 months of messing around, my friend finally got his Tau got delivered from Total Wargamer, it’s a stupid site who can’t communicate with customers or deliver in a reasonable time. With his models finally here we had a 1000 point game of The Relic, with Hammer and Anvil deployment. Space wolves vs the New tau codex, let’s see what the new boys can do...

The idea behind this force was that the bikes would get into the Tau line quickly taking most of the fire power. The lord should survive, and then wreck face when he hits the Tau line. While this is happening the grey hunters should move up behind them aided by the long fangs taking out whatever they can. The scouts are just a bit of fun which might kill something with plasma.

Fire blade – 60 (warlord: get up after going to ground) w/ fire warriors

A very small force, but with a lot more fire power than mine. I just have to hope that I can get close fast enough to start killing them.

We rolled for mission and got the Relic, deployment was hammer and Anvil, it’s been a while since we last played hammer and anvil so it was a good change. The board was set up for a little city fight battle, ruins everywhere and a few little barricades and trees in a corner. We rolled for set up and the Tau win. He deploys both fire warriors out in the open facing the relic. The riptide to the left of the fire warriors, giving them supporting fire. One unit of pathfinders go into the ruin at the back of his deployment and the other on the left of his riptide. The drones and battle suit go far right hidden from view. The flyer is in reserve.
I counter with my long fangs in a ruin overlooking the battle field with the rhinos each side of the ruin. The bikes hide behind the ruin and rhino on the left trying to stay out of sight. The wolf scouts go into reserve.

The fire warriors move forwards a little to gain maximum shots at my army while the drones and battle suit jump out of cover. The rest of the army stays still.

Shining lights at my army, the pathfinder shoot marker lights at the melta rhino and get a single hit. The drones shine marker lights at the long fangs and get a single hit as well. The Riptide uses its target lock to shoot at a separate target to its drones, and shoots at the long fangs and uses a marker light for +1BS, and kills 2 missile launcher wielding marines. The drones shoot at the melta rhino and penetrate it, exploding it, killing 2 hunters in the explosion. Lights again are shone at the remaining rhino from the pathfinders, hitting it twice. The battle suit shoots at the rhino using 2 marker lights for +2 BS, it hits and gets a glance and a penetrating hit, immobilising the rhino. The first fire warrior squad shoot at the long fangs killing the remaining heavy weapon wielding marines, leaving only the sergeant alive. The other fire warriors shoot at the hunters in the wreckage of the rhino and somehow kill 6! Due to a very good roll to hit and terrible armour save rolls. Everyone who took casualties hold their ground. 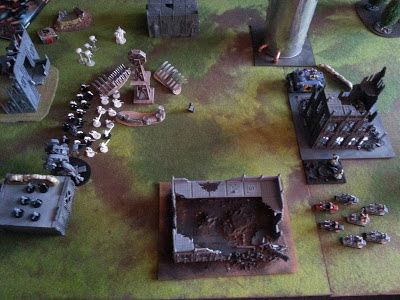 Going flat out for the extra cover save, the bikes move towards the Tau. The two hunters shoot at the fire warriors and shot down a single Xenos. The other hunters run a whole 2 inches forwards. Rhino doesn’t fix itself. 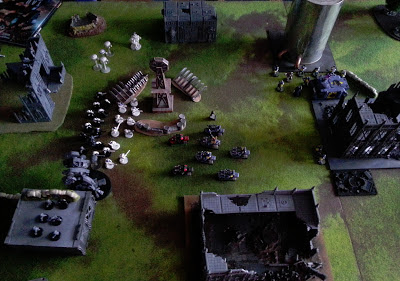 Streaking in from reserve, the razor shark comes in from the table edge. The battle suit moves to hide but still see the bikes, followed by the marker drones. Falling back the Riptide aims at the bikes (Novercharging its gun) but the fire warriors hold ground. 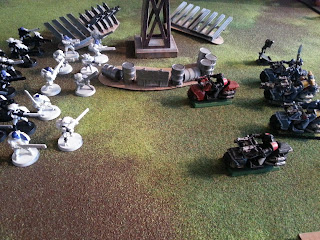 Shooting starts with the drones marking the bikes. The pathfinders use the drone’s marker light to get +1 BS, getting 3 hits. Following their brother lead, the other pathfinders shoot rail rifles at the bikes but they all jink out the way. Not allowing the bikers to live, the Riptide shoots at the bikes using 3 marker lights to ignore cover and get +1 BS. The novercharged ion weapon locks on with its large blast, and kills 3 bikes and puts a single wound on the wolf lord. The missiles from the two drones kill 1 more biker. The razor shark shoots at the bikes killing off the remaining bikes leaving the lord alone. Seeing an opportunity, missiles rain form the battle suit into the wolf lord taking 1 more wound from him, and then he dies to a rapid firing unit of fire warriors. The last unit of fire warriors shoot at the larger grey hunter squad and kill 4 more. I just can’t roll saves this game. 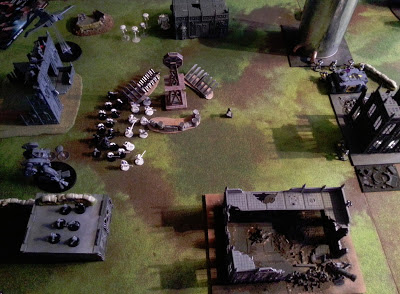 Rolling for reserves the wolf scouts come in, and I roll a 2 for outflank and so they arrive on the right tale edge, behind the battle suit. The few remaining grey hunters move forwards, defiant to the end!

Shooting from the plasma guns of the scouts kills the lone battle suit, while the combined bolt weapons of the marines kill 2 fire warriors. They marines then prepare themselves for the oncoming volley. 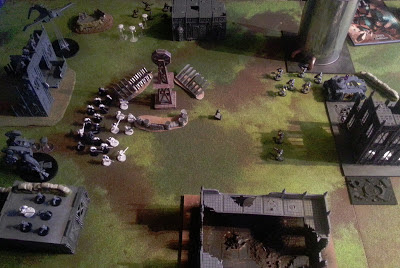 Continuing forwards the flyer goes hunting while the riptide novercharges its gun. The fire warriors hold their ground and the drones move away from the wolf scouts.

Starting with the path finder’s the hunters are marked 3 times. The scouts get a single marker light on them. The riptide uses a single marker light for +1 BS and hits the grey hunters, killing 5, wiping the squad out. The first squad of fire warriors target the scouts and kill 4 of them leaving the plasma gun alive, but the other fire warriors then overkill the final scout. The flyer wrecks the remaining rhino.

I concede at this point as I have 1 long fang left. I am practically tabled.

Well that went well, pathfinders can be quite devastating if you don’t take them out, and the riptide could be powerful used correctly. I was really surprised at how powerful such a simple list could be, devastating to me. Granted taking a small elite army focusing on bikes to do damage wasn’t smart but who knew. So did I learn much?
·         Kill the path finders: Constant bombardment of marker lights was horrible, and when I use eldar again this could be a great disadvantage. The ability to use 2 marker lights to ignore cover... that’s just sickening.
·         Fire warriors: the sheer fire power coming from these units when a fire blade is added Is sickening, they did a number to T4 marines, so T3 eldar will be devastated. Well let’s see In the future.