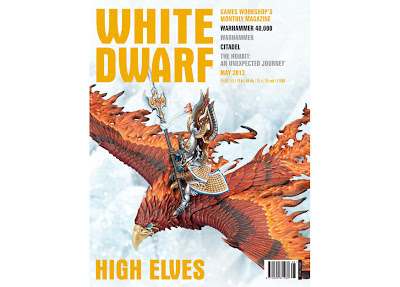 White Dwarf May 2013 is out and so its time again to have a look over it and let you know what i think. The big release this month is the warhammer armies book: High Elves, while i’m not a massive fan of fantasy at the moment i’m still interested in having a look.


The big release of the month is High elves, a new army book written my Mat Ward. Now the new models seem cool, even though some of them are a little odd. Most reviews i have seen about the skycutter don’t like it, but purely from the look of it i really like the model. Granted the rules might suck but i don’t know them, purely from the look i like it. We have the return of the EveryQueen and her handmaidens, even though they have changed from a unit of guardians into a hero character. Still i’m generally a fan of bringing back the old stuff. Now two other new units are the two Phoenix variants and the sisters of Avelorn. Starting with the phoenix, we have the flamespye phoenix which is you classic flaming bird which apparently can return from the death, i approve of this greatly. How ever the other variant is the Frostheart phoenix, its back ground is that when a flamespye gets old the flame goes out (i get that) and some how turns into frost, the bird releases cold from its feathers, you know just like when a fire burns out it turns into a pile of snow (don’t care that its magical, it doesn’t make sense). So i like the flame bird, hate the cold one (even if i prefer the model). He other unit i mentioned is the sisters of Avelorn, they are women archers that the everqueen hand picks to guard her forest from evil... yer its new and possibly unfounded but i will live with it and hope they have a better back story than that. Before i forget the elves got two new hero’s, the hand maiden as already mentioned but also a LoreMaster of Hoth, a skilled swordsman who also happens to be a mage. Now forgive me for not liking that model at all, but i though elves, especially the warhammer elves were generally a master of a single art, not deviating from their chosen path, not some jack of all trades? The only thing similar is Teclis but he has a damn potion to change (or he used to, i don’t know if he still has that rule) to switch between combat and magic. Well the army book was written by Mat Ward, the guy who is known for his award winning back ground writing. While i’m sure the book will be great, the background i have little to no hope for.

Just something that i noticed with a lot of the pictures of the new models, red light. While it has been used quite rarely in the past it has been used, but in this magazine it has a handful of pictures back lit with red lights. It just looks tacky to me when used with high elves, its more of a useful tool for daemons or evil armies to show fire, danger or power. The high elves... no, not unless its a dragon bearing down on some orcs or something.

The other new release comes in the form of Radagast riding his rabbit pulled sleigh, again seems like a waste of resources, but i don’t know, you hobbit layers let me know.

Army of the month this month is a rather large Blood Angel army painted by Mark Bedford. It’s not quite as well painted as some of the other armies that have been shown, but it’s still quite nice to look at. A large chunk of the army is pre-heresy with a lot of forge world models. It’s quite astounding how much money this would cost for us regular people. The army has an impressive 5 dreadnoughts shown, but he states he has over 30 dreadnaughts else where. How ever i do have a slight comment on the army, practically every unit is painted in a ever so slightly different shade of red, but it’s a minor issue.

The battle report is between the new boys, High elves and Ogres kingdoms, in a scenario from the back of the rule book. It’s getting closer to a regular missions so its better than yet another made up scenario. They increase the number of photos and reduce the writing, while i like the increase in pictures the reduction of description is a little disheartening but it’s a way to go i guess. A slight problem is that some of the larger pictures aren’t much different from the ones i post on my blog, i would have expected more from such a magazine. Spoiler – It’s a draw, that was very surprising result for the magazine but not for the scenario being played, it was more or less a capture the single objective, which often end in a draw. It was an ok battle report, nothing major.

We have an article of armchair general, a dark angel player shows off his army and explains why the loves to play the army he does. If i gave you 1 guess you would get exactly what he says, he likes the fluff. Wow, that was so worth a whole 4 pages. Yes it’s a nice army, but you are never going to say in white dwarf magazine that you like playing an army because you are a Win At All Cost (WAAC) player and this is the most power full army for your WAAC needs. No ones going to want to look that much of a dick in a magazine are they?

Blanchitsu is only 2 pages this month and has some other guys models of what i can only describe as Escher gangers which admittedly look pretty cool, and i’m sure one of them is meant to be Mad Donna, a character from the old necromunda game (a previous version). Again though it doesn’t justify its own existence, just kill the article and move on. It was a very interesting thing to try and run but it didn’t work, stop doing it, take the old dog out back and shoot it.

Some how they have yet another golden demon 2 page spread, i though it died off two months again. Just stop it, it was nice having it once a year, not having 4 of these buggers in a row! They have made a fair few mis-steps with this new layout now.

Johnson and Vetock waste our time again. Johnson carries on with what he said last month with GMs and i feel he repeats himself a little, and he could easily have got it all said last month, no point saying it this month. Vetock talks about his painting schedule and how life gets in the way of painting... yer, that’s life mate. Get over it.

We get an article about dragons this month as normally happens when high elves come out, or a new dragon kit (we didn’t get one which surprised me). Its very much the same as normal, if you don’t know the history of dragons or aren’t old enough to see how the dragon models have changed over the years it’s a nice little read. I just wish it showed off some of the old dragon models while it was talking about dragons in general. While i don’t like this article that much, i feel its more designed for the younger or newer people that have joined the hobby. Now i can’t blame white dwarf for doing this, and actually i think its a great idea. Well done.

In summery it hasn’t been great, it was very difficult to force myself to read. I just couldn’t get engaged with any of the articles and couldn’t get exited about the new releases. That might just be me though; i just hope next months magazine featuring the Eldar (hopefully) will be better. If that can’t engage me nothing will. If they just take some of the current staple articles and make them a feature every 3 months it would freshen them up, give us a break form them. Some more original articles would be very welcomed. This is more of a rant more than anything else, but i hope it’s been ok to read.
Posted by Malduran
Labels: Article