Codex Eldar: Do we need farseers? 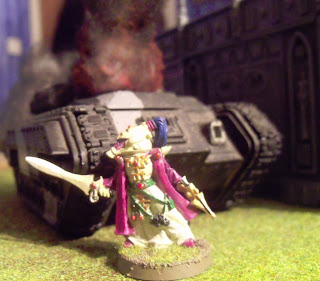 Now i have been trying to write a new list that i am happy with using the new codex, and right now i am struggling. I keep trying to slip back into my old army which just wont work right now. I want to just use a pure eldar force for the time being, and its hard breaking old habbits. The biggest issue i am having is, do i really need a farseer?

My main issue with using a farseer as a HQ is that for 100 points hes quite good, but because i am at the whim of the dice gods for what powers he gets, its a little tricky. Unless i go for just the primaris powers in all 3 powers he can get, i am not going to be able to know what he will get before hand. Yes i know that's the way psychers go now, but with the Eldar i have always found that your HQ has to compliment your force, their is no ifs or buts and if i don't know what my farseer will have that's 100 points potentially wasted.

Lets say i go with the primaris powers, thats effectively 2 guides. Now with the new codex all the things i want to have a re-roll to hit have gone up to BS 4 (guardians, war walkers) so now it seems like a bit of a waste. If i rely on fortune i might not get it. Doom is now brilliant as it effects tanks as well, but again not guaranteed to roll it. And if you get stuck with death mission... by god i will be pissed. Who thought it would be a good idea to give an eldar psyker an ability where he effectively commits suicide, that is totally against the eldar fluff, If they had the choice they wouldn't do that, only in the most dire of circumstances would that even be contemplated, so it's irritating me a little.

Instead of the farseer i'm looking at a spirit seer or even a pheonix lord as my HQ choice, both have merits that the farseer doesn't. Hell the spirit seer might not be as powerful a psycher but i can't help but feel the runes of battle are more useful to me the more i look at them.

How are you guys thinking of running your HQ slots?
Posted by Malduran
Labels: Eldar