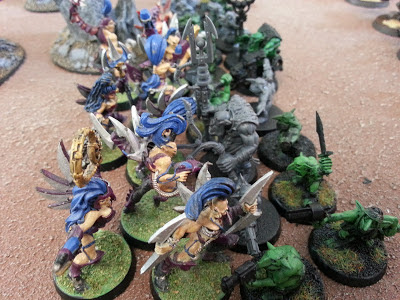 The dark kin go out on a slave raid in this battle report and come across an ork horde ripe for the picking. This battles mission is the emperors will, with vanguard strike deployment. I had decided to try something different with this dark eldar army so went combat heavy, just to see how it can do against the green tide.

I have to say that I wasn’t very confident facing orks with this list but it’s always good to get out of your comfort zone. I have some shooting that might be able to kill some orks but if I can get my combats right, I might stand a chance.

A wall of orks that I have to fight though, and a good number of walkers that will destroy me. This could be a problem for me, but if I can combine assault the big units I might kill enough to take minimal loses.

We rolled for mission and ended up with Emperors will, so two objectives. Deployment was vanguard strike. Orks won the roll for table side and we set up our objectives, I set it up mine in a rocky hill, he set his objective in a ruin. I won the roll to set up first, deploying the 10 man warrior squad on the objective. Behind them I place a ravager and a venom. On my right I place the rest of my army ready to strike at the orks. 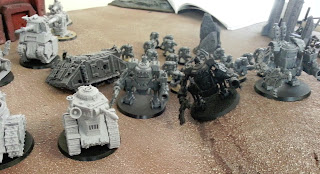 Screaming forwards the wartrakks move up the left flank followed by the killer kans. The other unit of kans move forwards as do the grots shielding the orks. The wave of ork boys and nobs move forwards.

Rolling for the weirdboys power this turn he gets a build up of waaagh energy and blasts a raider, blowing off its dark lance. The kans with big shootas target the same raider and destroy its engines, immobilising it, but it still lives. One unit of traks goes flat out and the unit other shoots at the closest ravager, exploding it. 1 warrior dies in the explosion. The killer kans with grotzookas shoot at the warriors and kill a single dark eldar warrior. 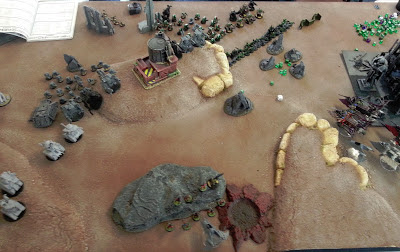 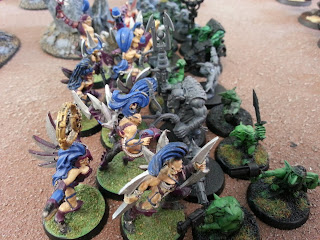 The wyches in the immobilised raider jump out and move towards the orks. The wyches in the raider move forwards then jump out of their transport directly towards the grots. Staying inside their raider the archon and incubi retinue follow the wyches. As danger is coming towards my lines the ravager shows its true colours and moves back, not desiring the same fate as its sister ship. Both venoms move to the right.

Shooting starts with the ravager shooting at the kans with big shootas and stuns a single kan. Both venoms shoot at the ork boyz behind the grot wall but only manage to kill 2. The rest of my shots fail to do any damage.

Assault phase, turn 1, and the wyches attempt to charge the large grot unit, and thanks to fleet they make it. 1 wyche dies to over watch but I still make it. The wyches shows their superior skill and kill 13 of the grots, unfortunately I lose a further 1. The gretchin brake and get cut down. 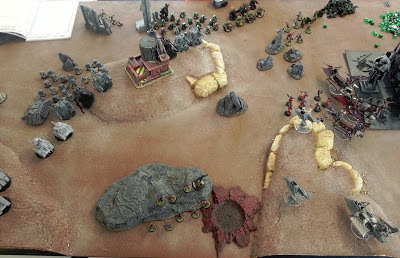 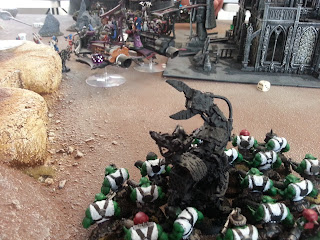 The Kan wall advances followed by the wave of orks. The wartrakks move down my long table edge carrying on up my line. The warboss liked his grots, he moves towards the wyches who killed his pets, not allowing them to get away.

With a great waaagh the weirdboy and his mob teleport behind my lines, right behind the archons raider, and lock on, not scattering. The boys then shoot the raider and get a single glance on the transport. The kans again shoot at the empty, healthy raider and gets a glance and penetrating hit, but I jink both results. The grotzookas target the warriors again and kill off the squad. The meganobs unleash a torrent of flame with their combi-skorchas killing every single one of them... damn. 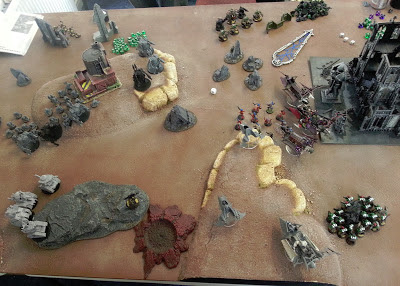 No razorwing this turn for me. With the new threat appearing behind them, the archon and incubi jump out of their transport and go after the ork boyz. The wyches still alive move towards the killer kans while the ravager moves away from the boys. The venoms move around again. 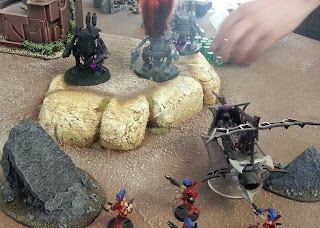 Throwing a haywire grenade, the wyches manage to get a glance on a different kan, so two only have 1 hull point remaining. The ravager shoots at the closest wartrakks and explodes a single vehicle. Combining their shots, the venoms manage to kill 8 ork boys in a hail of splinter fire. A blaster from the back of a venom destroys a kan.

Assault phase and the wyches attempt to charge the kans in front of them but fail to get in range even with the fleet re-roll. The archon and incubi charge into the ork boy behind them and luckily weather the over watch fire. The dark eldar manage to cut down 8 of the ork boys but unfortunately 4 of the incubi die as well thanks to the sheer number of ork boys. The orks are fearless so hold. 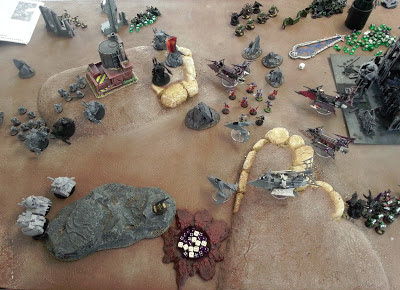 Seeing more wyches, the ork warboss goes after them. The kans follow suit and move toward the poor wyches. On the left the kans move forwards followed by the ork boys and trucks. 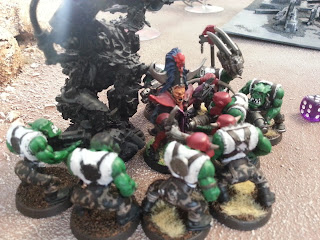 Gork (or possibly mork) doesn’t answer the weirdboy this turn as he fails his psychic test. The wartrakks shoot at the last ravager and manage to penetrate its armour, immobilising the skimmer. The grotzookas from the kans then stun the ravager. The other killer kans shoot at the mobile raider and strip its dark lance off it.

Assault phase and the nobs and warboss charge into the wyches, they use their skills to deal a single wound to the nobz but even with their dodging ability 7 of the wyches get ripped apart under the fury of the nobz. The rest escape. The kans charge into the raider and destroy it. The ongoing combat between the archon and ork boyz end in a draw, with 4 ork bodies, and all the incubi lie dead, leaving the archon alone. 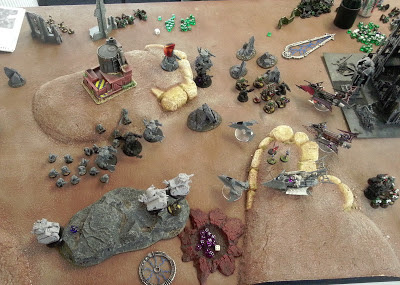 Despite the archon cursing the pilot, the razorwing jetfighter still doesn’t appear from reserve. As I’m in no position to hold my own objective, both venoms move towards the ork objective. The wyches that ran from the warboss regroup and move forwards.

Shooting from the ravager explodes another wartrakk and both venoms go flat out towards the objective.

Combat and the Archon issues a challenge to try and live which the nob accepts. The speed of the archon and venom of his blade deals a single wound to the green brute, not enough to kill him. The nob then uses his power klaw to cut the archon in half, he got 2 wounds, and 1 gets past the shadow field. My warlord is dead. 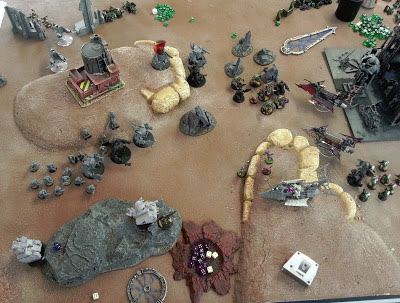 In a show of bravado the warboss leaves his nob squad and goes it alone towards a raider. The orks on the left move back to try to help the grots, as do one unit of kans. The other unit of kans go towards the wyches. Lead by the wierdboy the other orks go for my objective. 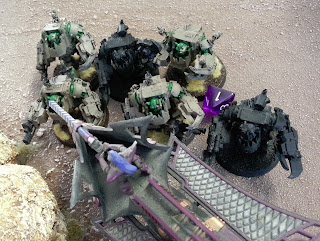 With a gigantic WAAAAGH! The weirdboy imbues all orks with the power of the waaagh!. The kans that moved back shoot at the closest venom and get a single glancing hit which is jinked off. The shootas from the boys target the other venom and get a single glancing hit. Following suit the kannons shoot at a venom but it vehicle jinks out the way. Finally submitting to the orks, the ravager is wrecked by a wartrakk. Unloading whatever they have, the kans grotzookas decimate the wyches, removing them from the table. The warboss uses his shooter and wrecks the raider in front of him.

Assault phase and the mega nobz charge a raider and make it explode, none die. 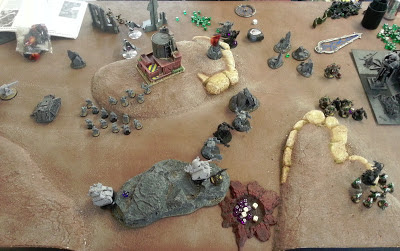 Finally the razorwing comes into play, and goes straight for the ork warboss. Both venoms move towards the ork objective, and one drops off the dark eldar warriors. 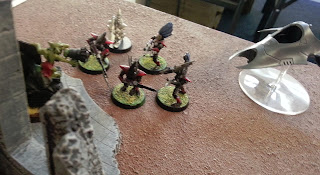 Shooting phase and the venoms both shoot at the grots on the objective and kill every one of them, the warriors then run to the objective. The razorwing jetfighter targets the warboss, firing both disintegrators and two missiles the warboss dies in a spectacular explosion. 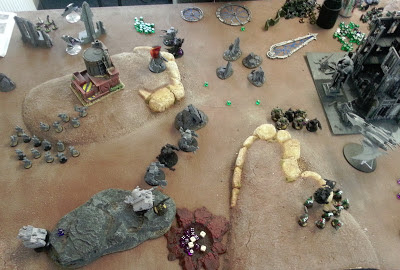 Shooting phase and the weird boy teleports the boys on top of the objective. The meganobz shoot at the razorwing and get a single glance on it. Shooting frag rounds the kannons target the warriors who go to ground, and 1 dies. The kans then shoot at the same warriors and I lose another warrior, and they run. 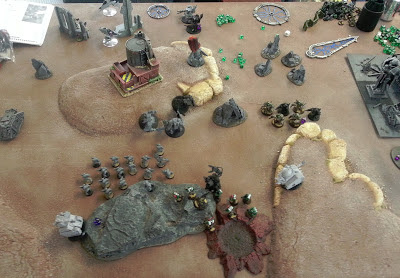 Shooting from both the razorwing and venom only kill 4 boys who hold. The venom shooting at the kannon kills a single kannon. 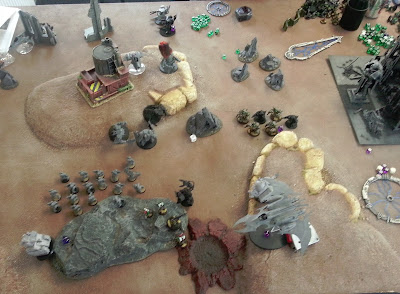 We roll to see if the game continues...

Well that was one hell of a close game, after getting dominated at the start I almost pulled it back if it wasn’t for a lucky roll on the weirdboy. If the razorwing came in a turn or two early, I might have been able to kill off some of the boyz before they took the objective. Still it was a good game.

I defiantly made a massive mistake with the incubi and wyches, but I will just have to watch out for that in the future.

Sorry it’s not an eldar battle report, that’s next week vs Tau. So make sure you come back.
Posted by Malduran
Labels: Battle report - 40K