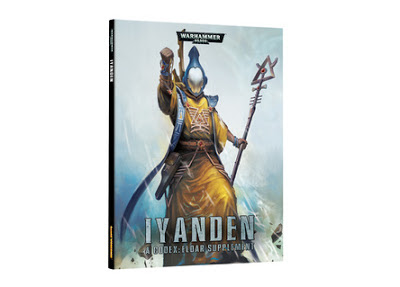 It took a while for the hard copy of the Iyanden supplement to come out after the digital copy was released, but I finally got my hands on one. I know a lot of people have done this already but I just wanted to throw in my take on the book out there.


In the book you get a large section of background on the Craftworld of Iyanden. Reading though this I was actually quite impressed, they have taken all the little bits and pieces that has been thrown around in the background, strung it all together and then added to it. I did like the expanded information on Prince Yriel, explaining why he was exiled from the craftworld and how he was crucial in the defence against Kraken. What surprised me the most was how Iyanna Arienal, previously only mentioned in the 3rd edition eldar codex and even then the only information given was how she awoke spirits, was given a full background and a key role in Iyandens fate.  I would say that this section of the book was well worth a read, explaining a few of the key moments of the craftworld, including how their own arrogance lead to their downfall (isn’t that always the Eldar way?), now it’s not the best fluff even written, but its quite an enjoyable and interesting read. And of course the Avatar gets its head kicked in, of course, no Avatar in the history of the fluff of 40k has ever done anything except die and prove how hard something else is… I’m starting to think the game stats for an Avatar are way to high for it.

After all the background, you get presented with colour schemes for different houses of Iyanden, different ways to paint your wraith constructs to identify them as a specific group. While the idea is good I feel its wasted here as well, it all looks the same bar a few triangles and lines here and there. It just didn’t really interest me all that much. After that you get the photo gallery of different eldar units painted in the Iyanden colour scheme, which interested me a little but its almost exactly the same as the Codex Eldar section, which seemed a little cheap to me.

Finally we get onto the rules, the only real reason why I purchased the book. So how is the host of Iyanden different from every other?
They can have a wraith lord or knight take on the mantle of the warlord, leading the army and rolling on the warlord table, which is a very interesting rule, which could make getting slay the warlord harder for your opponent , but I prefer to hide my warlord like a cowered in a big unit of infantry.
The shadow council rule allows you to take 5 spirit seers for 1 HQ choice, which seams a little extreme, as theoretically  you can take 10 in an army, which is far, far too many. Still I like the idea, but badly implemented.
New Warlord table, but you are not forced to use it, you can choose to use it or the regular eldar table. Its odd that they are not forced to use it, it just opens up options I guess.
New Weapons, again the remnants of glory can still be used to they gain access to extra weapons, some of which are quite good, an ap 2 sword which increases in strength for each model that it kills. A gem that can heal wraith lords and knights.

No new units, no special characters for only Iyanden, and no restrictions on what you can take in your army. Now this surprised me the most actually, I would have suspected it would have said you can’t take Eldrad or Illiac, but no such comments. I would have though you would be forced into taking at least a single wraith guard or wraith blade unit as your compulsory troops choice, but no such ruling. There is no down side of using the supplement over just the codex, the only slight drawback if you lose conceal and gain an power which gives wraith units battle focus and furious charge, which is a rather over powered ability in my mind. But you can choose to use everything in both the codex and supplement if you want, with no draw back, no penalties, I really don’t understand why you wouldn’t use it, unless you love conceal (I do a little) and its key to your plan.

After this you get a welcome addition in my mind, both city fight and planet strike stratagems for Iyanden, what an unexpected turn of events, support for the expansions that haven’t been around since 4th edition, a very welcome thing indeed. As I haven’t played a proper game of either of these for a very long time I will not comment as I don’t know what’s good or bad, but they look very character full of eldar is nothing else.  To finish off we get a whole host of scenarios, both eternal war missions and 3 historical missions to play for those of you who like to play historical events (I might do this in the future).

So how do I find this supplement? Well lets ignore the price for now, I will get to that later. If it is a sign of things to come, and from the wording, more will be released in the future I welcome it, but I can see the space marines getting new units and special characters in theirs while the eldar get nothing. But we shall see. I like the idea of the book and the slight variance it brings to the battle field. I like the back ground and the breath of life it adds to the Iyanden craft world. When we have at least a single supplement for each codex (bar daemons of chaos, I don’t see how they could have one) the game will be better off for it provided they are of similar power and don’t change the base codex that much, like this one.

I think if it was £15 it would be a real barging, but for the same price as the Codex you need to use this, I can’t say its worth it.  I just hope the future ones will be cheaper, but we all know they won’t be.
Posted by Malduran
Labels: Article, Eldar