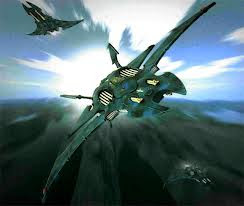 The skies darken with monsters on leathery wings, hunting anything it can get its claws on. Missiles and bullets scream from hi-tech flying machines cutting swathes of men down where ever they pass. What tools can the Eldar bring to the fore in order to combat such threats with their new codex? Not that much is all I can say, but let’s have a little look shall we? 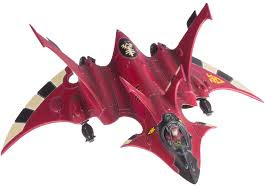 When the enemy bring flyers to the table, the eldar can do just the same in the form of the Crimson Hunter. This aspect warrior in his own flyer is perfectly capable of shooting down the enemies weapons of war, be they monster on machine. For those of you who don’t know, the crimson hunter comes equipped with two bright lances, and a pulse laser, so that’s 4 shots all strength 8 ap 2, two of which are lance (not that it matters vs other flyers mind). With all that fire power you should be able to down a flyer or monstrous creature with relative ease. Now if you upgrade the crimson hunter he can get even better at the job (for more points of course), upgrading his BS to 5, so if you are against a flying tyrant, you are hitting and wounding on 2+, which should cripple it. Against say a storm raven, you are hitting on 2+ and glancing on 4+, so you have a reasonable chance of crippling it in a single turn, and with ap 2, you get +1 on the roll to damage.

Let’s crunch some numbers shall we.

Taking the example of the storm raven again, assuming you have a regular crimson hunter and you still have all your weapons.

Each shot – 0.333 to hit, 0.5 to glance or pen (let’s say we are just after penetrating hits, so 0.333), and 0.333 will result in an explosion. So each shot has 0.037 chance to destroy a storm raven, so 4 shots gives us a 0.148 chance to actually destroy a storm raven, that’s 1 in 10 turns. Not great but assuming your just after glancing it to death, you have a greater chance, but less likely to destroy it in one turn. All this isn’t taking into account the chance of the enemy craft evading and getting out the way.

A special rule that the crimson hunter comes with is that it can re-roll failed armour penetration rolls so that stats get a little higher, up to 0.330 with all 4 shots, that’s 3 times more likely. That’s quite a big jump.

Now if it gets shot at unfortunately the crimson hunter will probably get blown to bits, with no holo field, no special rules to help it survive, it is just a armour 10 vehicle. Most weapons with skyfire (quadgun, flack missile, other flyers) are at least strength 6, but most commonly 7, so you are you trouble the second you are looked at. What does this mean? Well if both players have a flyer you want yours coming in second otherwise you get shot down. If they have interceptor, you get shot down. If they have more than 1 source of skyfire, you get shot down. Not great, so you have to try and place you hunter either hiding (if you have any BIG terrain) or just out of range of any interceptor guns (interceptor shoots at the end of the movement phase). 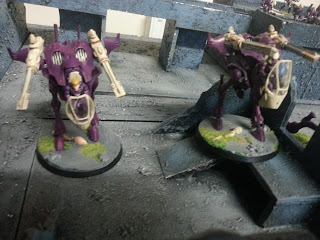 War walkers can be equipped with flack missiles (provided they have missile launchers of course) giving them the option to shoot down flyers. Now they can buy two of these (gotta buy both the flack missiles) giving a full squad 6 shots against offending flyers. With BS 4 you have a good chance to glance a flyer to death in a single turn but it does get a bit expensive (330 points for the squad). The shots from the flakk missiles are only strength 7, so worse than the crimson hunter, but the weight of shots might make up for this. Against a storm raven again, that's 3+ to hit (4 hits), 5 to glance (1.332 results) so you should get a results assuming they don’t make the jink save from evading.

As I looked at before for the crimson hunter, let’s see the chance of blowing up the storm raven in 1 shot. 6 shots from the unit, 3+ to hit (4 hits), to penetrate the armour you need a 6 (0.666 pens) and then to explode the vehicle you need a 6 again (0.111) so it’s going to take a long time to explode that storm raven.

While the war walkers don’t have any special rules allowing them to deal extra damage to flyers, they do have a force field to help them survive a strafing run from a flyer. The force field grants the walkers a 5+ invulnerable save, which might save them from harm, but I wouldn’t count on it. It is a similar protection at flyers have (evade) but at least the war walkers aren’t forced into snap shotting next turn.

When it comes to anti-flyer are your point’s best spent on a unit of war walkers? I would advise against it as for 330 points you could probably have better options elsewhere unless you are absolutely desperate. However a good thing about this unit is that it is very diverse, it can take on tanks, infantry and flyers so there will never be a turn they don’t have a viable target, so on the off chance you bought them and you opponent doesn’t have a flyer you haven’t wasted that many points, just about 60.

Now a rather less obvious choice is to go for a unit of war walkers armed with 2 scatter lasers and guide them, and pray they get a couple of glances off on the offending flyer. It’s not a reliable tactic but it can be used in times of great need when all else has failed. I have done this before and its worked ok, not great though.

The final chance you have for sky fire in the Eldar codex is taking an Dark reaper exarch and give him a missile launcher and flakk missiles. This gives you a single model in a unit who can take shots at flyers when all else has failed. I personally wouldn’t suggest this, as even though you can give the exarch fast shot for 2 shots at the flyer, the points wasted by not shooting the other dark reapers is a bit silly. I don’t know they this was added into the codex but it was. For the sake of completion let’s have a look at the stats...

With fast shots the exarch gets 2 shots, so with BS 5 (1.66 shots), its strength 7 so vs storm raven 1.11 chance to glance it or 0.28 to penetrate and 0.046 to actually get it to explode. If you purchase star shot for the other reapers in the unit they can snap fire and possibly do damage but it’s 146 for that little unit.

Or you can just go for the fortification with either quad gun or lascannon. Many times in the past people have gone over the pros and cons of this so I won’t go into much detail. However it is worth noting that even a lowly guardian on a quad gun can be a pain in any ones ass, especially if they have a scatter laser to add a few pot shots into the flyer as well.

Which is the best for eldar?

For some reason the game designers felt that eldar needed to be weak against flyers, I don’t know why, but they can’t be good against everything I guess. How you defend against flyers is rather an interesting questions and the only answer you can really give is it depends on your army choice. I know it’s a disappointing answer but here me out first.

Let’s say you have a very defensive army full of rangers, guardians with support platforms, vauls wrath batteries and maybe a wraithlord with bright lances for counter attacking, you are going to be much more inclined to take an Aegis defence line over a crimson hunter as the defence line adds a lot more to your army than the flyer ever could.

If your army is full of aspect warriors in wave serpents you aren’t going to want a defence line as it will just get left behind, while a crimson hunter fits the army a lot better as it can get to where it needs to in game. However with this army you might also choose not to worry about flyers are you might be in their deployment zone turn 1, and flyers cant harm you very much at all without going into hover mode which are then just skimmers.

My personal preference though for anti-flyer would be the crimson hunter, I think it has the capability to out class any flyer, has the manoeuvrability to always be where it has to be, and more importantly the stats are kind of it in its favour. I wouldn’t just take this alone though, taking the war walkers with scatter lasers for an emergency is also key in my mind, as it’s not a waste of points but it can also deal that final glance to strip the final hull point of a pesky flyer.

Anyone care to share their preference?
Posted by Malduran
Labels: Article, Eldar