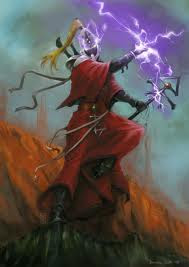 I am restarting my evolving list series of posts for Eldar as it gives me a little something extra to strive for. All of my previous games with eldar have had totally different lists so this has given me a glimpse at what the new roles of each unit is. Granted I haven’t tried all of the units yet but I think I’m happy for now, in future I probably will still test out new units, so the list won’t get stagnant. Anyway onto the list...


When I first got the Eldar codex I remember saying some things which as I have played the game with it, are apparently not true. The first and most obvious one is that I though Farseers where now useless thanks to random spell generation, this is not the case. With the boost to the powers themselves all of the eldar powers are useful (bar death sentence... I'm still confused about that one) and will have a good use for them. So this list is rather different to what I ever expected I would be using before the 6th edition codex came out.

This is a 1500 point list for Eldar, no Iyanden supplement

Bang on 1500 points, and I have to say I'm happy with the list. Granted there are some obvious flaws, but I can work them out in the future. So what’s the battle plan? Well I will put both the spirit seer and farseer into a guardian squad and hide them in cover, they will have conceal and something else to help. The farseer will buff the army and potentially kill something if its lucky. The wraithguard will go straight towards the enemy’s big scary unit and kill it hopefully while the war walkers and fire prism kill what needs to die. The warp spiders are fast and can get to where it needs to be in order to kill small units or tanks. I have added the crimson hunter for some more anti-tank and anti-flyer as all I have is a guided unit of war walkers to take them down.

Its not the most competitive list yet, but I will get it better the more I play with it. The guardians are potentially a weakness but they are also good close up and can take long range pot shots with their heavy weapons platform. The army’s biggest threat will be shooting armies like Tau who can kill my troops from a distance and win the game that way.