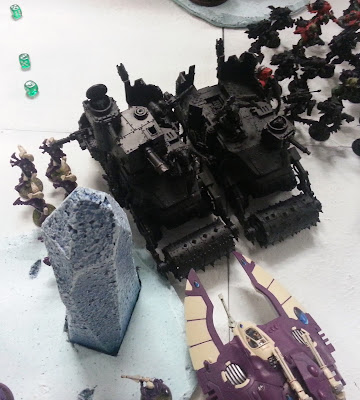 This is my final game with my current evolving list against Battle wagon Orks, in a 1500 point game of the scouring with vanguard strike deployment. I have played these orks before so I know what he is capable of but he has changed his tactics this time compared to our last game.

I use my evolving list army (which as it turns out is 1580 points, I’m a dirty cheat, don’t know how it happened but it has).

We rolled for mission and got the scourging, and the deployment was vanguard strike. We set up the objectives, I place one in each piece of area terrain in my deployment zone and one in the top right hand corner. He places one in the top left, in the ruin and in his piece of area terrain in the middle. He then wins the roll for first turn and set up first.

The ork deployment is very simple, the 3 battle wagons on I the middle facing my deployment zone flanked by a squad of trakks each side. The kannons go into the ruin and the storm boys hide behind the battle wagons.

I set up a unit of guardians in each of the pieces of area terrain while the wave serpent hides behind the one on the left. The farseer and spirtseer both go into the guardian unit on the right. I place both the war walkers and fire prism at the back of my deployment zone to keep them safe. The warp spiders go in the right to jump up the flank, and the dark reapers go on the left to try and get some side armour shots. The Crimson hunter is in reserve. 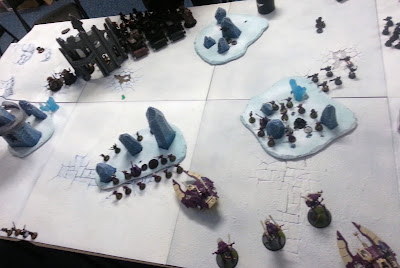 The rangers infiltrate to the front of area terrain hoping to bait something into charging them and leaving the guardians alone. We flip over the objectives and I hold the 2 and 4 point objectives. The two objectives in the top right are 3’s and the other objectives in his deployment are 2 and 1. I have the advantage right now but the orks are coming for me.

All battle wagons drive forwards straight for the eldar lines. The wartrakks go up the right into the terrain and are fine. The trakks on the left get stuck In the crystals and one gets immobilised. Storm boys follow behind the battlewagons.

Shooting starts with the kannons using frag rounds on the guardians on the left and 4 die to the barrage of shots. The trakks on the right shoot at the wave serpent and manage to glance it. Th mega nobz in the battle wagons snap fire at the rangers and manage to down a single ranger. The boys follow suit and kill 4 more. The other boys shoot at the guardians on the right and kill 2. Snap shots with that many dice hurt. 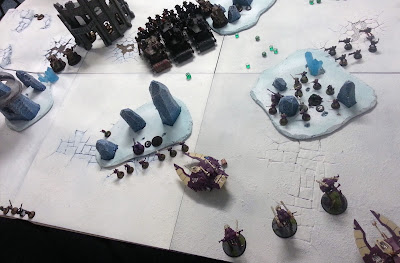 The spirit seer casts embolden and conceal on his unit. The farseer casts guide on the war walkers. The warp spiders warp jump forwards 13 inches as the wave serpent moves forwards and drops off the wraithguard by the battle wagons. Trudging forwards the dark reapers aim to get a better shot on the side of the battle wagons. 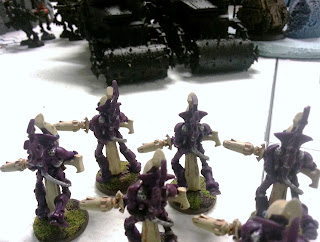 4 explosions hit the side armour of the far left battle wagon and it explodes killing 2 of its boys inside thanks to the dark reapers. The warp spiders shoot into the trakks on the right, wrecking them both. The wraithguard fail to do any damage to the battle wagon in front of them with 3 3’s on the armour penetrating roll. The bright lance and fire prism suffer similar fates and do nothing to the tanks. The war walkers shoot at the boys in the open and kill 13 of them. The wave serpent and guardians finish off the boys. The wave serpent uses its vectored engines to face the orks. 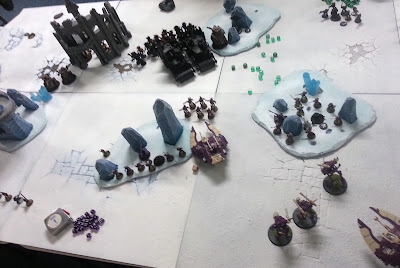 The storm boys jump forwards very far and go very close to the guardians with the two seers. Both battle wagons tank shock the wraithguard and they chose to just move out the way but take 2D6 hits resulting in 4 hits, and I save all of them. 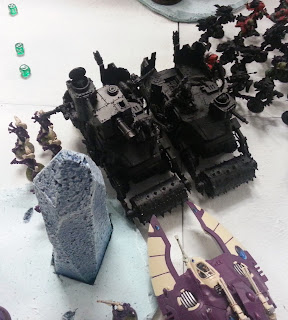 WAAAAAAAGH! Is called and all orks gain fleet. The nobs shoot out of their battlewagon at the wraithguard and a single wraith construct falls with its spirit stone shattered by a lucky shot. The kannons use krak rounds and blast 3 of the wraithguard into pieces leaving 2 left. The ork boys manage to be in range of the war walkers (just) and get a single glance but the force field saves the walker.

Assault phase and the storm boys attempt to charge into the guardians and 3 die to over watch. As he’s charging in to terrain he roll his 3 dice and gets 1,1,2, not enough, so we re-rolls them all, thanks to fleet and gets the same roll. They fail to get into assault range. That was very unlucky and potentially game changing. 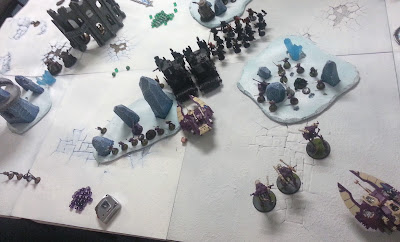 The fareer casts guide on the war walkers, the spiritseer casts embolden and the crimson hunter comes in from reserve on the left hand side towards the two battle wagons. The wave serpent moves away from the tanks and the dark reapers move to get a better shot.

Trying to make its mark the crimson hunter shoots at the closest battle wagon to it and only manages to take 2 hull points off it. The dark reapers finish the job exploding the tank and wounding a mega nob in the explosion. Making up for last turn the fire prism shoots at the last battle wagon and gets a penetrating hit, exploding that one as well, killing 8 boys and 4 storm boys in the resulting blast. The lance guardians shoot into the meganobs killing the wounded one. Using all they had the warp spiders targets the storm boys and kills 6 of them. The farseers guardian’s body guard kill 5 more storm boys, finishing off the unit. The war walkers target the ork boys on foot and get a massive amount of wounds and kill off the squad in a single volley (11 orks in cover gone). To finish it off the wave serpent targets the nobs and kills 1. 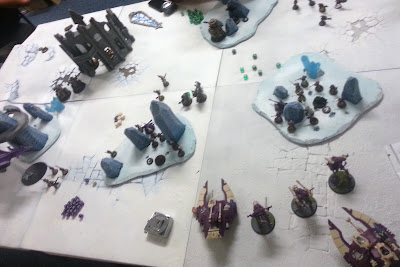 In a desperate last attempt the warboss splits off from the nobs and goes after the farseer himself while the nobs go for the wratighaurd.

Laughing the nobs use their combi-skorcha and flame the 2 wraithgaurd killing them both. The kannons frag the scatter guardians and kill them all with a vast number of wounds.

Assault phase and the warboss charges into the guardians this time making it though the cover and issues a challenge to which the spiritseer accepts. He dies, dead god I didn’t expect anything less, he got murdered but it held up the warboss for a turn. 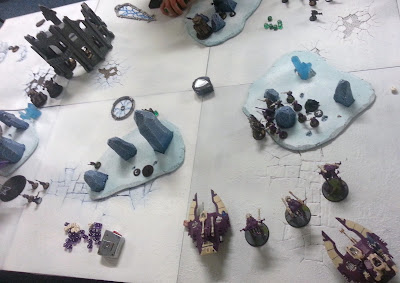 The crimson hunter only moves 18 to shoot at the nobs and the wave serpent goes after the kannons.

Shooting from teh wave serpent kills 2 of the kannons and the remaining crew run off the table. The crimson hunter kill all the meganobs while the dark reapers destroy the remaining trakks.

Assualt phase and the war walkers charge in to aid the guardians. Again the warboss issues a challenge and the farseer refuses. The war walkers manage to kick the warboss and deal a wound to him, and I am lucky again as only 3 guardians die. I Hold. 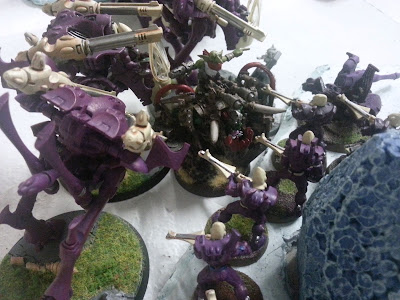 Again the warboss bellows a challenge and the farseer accepts remembering I get re-rolls for the bystanders. I still die, the warboss murders my warlord and the guardians fall back 8 inches. The war walkers did nothing.

I reposition my army to face the warboss and grab as many objectives as possible. The guardians regroup.

The war walkers fail to wound the green mountain and all 3 get wrecked in a single turn.

The warboss turns and shoots down a single guardian before charging into them and killing them all.

Victory to the Eldar.

That was a close game, with the warboss running rampant on his own at the end, and what makes it even worse was I had 80 points more than him (still can’t believe I have been cheating so bad with this list). To make the list legal I would have to drop the rangers and a single wraithguard, not a bad thing to do. So if I had done that would I have still won? I hope so but I can’t be sure. Next list I have to be very careful I don’t make such a mistake again. What did I learn?
·         Don’t throw the war walkers into combat, they didn’t help and just made things worse as they kept the warboss in combat when they didn’t need to.
·         I want to try the farseer with different powers next time, maybe divination, I will see if they have more useful powers instead of pointless ones like death mission. Granted if I had cast deathmission against the warboss I might have done better but I forgot.