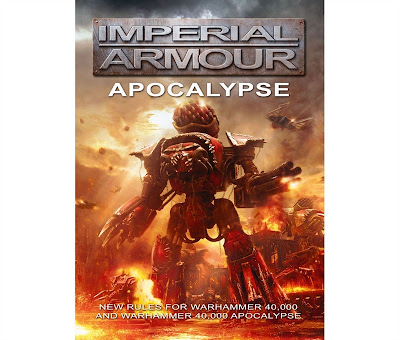 With the release of the new Apocalypse rule book, forgeworld shortly after released their new imperial armour book covering all of their fancy pants models. Having always loved the forgeworld models and actually owning two (only one super heavy unfortunately) I was eager to buy the updated rules. So here I will share my thoughts on this new book, Imperial Armour: Apocalypse.

First of all the book states that it is replacing the old Imperial Armour: apocalypse second edition and apocalypse 2 books. So from now on all of those books count for naught. With the actual apocalypse book taking some of the forgeworld models (namely the bane blade variants) we have a few pages open for other models. 161 pages of rules to be exact, and that’s a lot more than the past few books, not bad when you consider it’s the same price as the others were.

Like the previous book, Aeronautica, the book doesn’t just have the apocalypse units, it releases rules for just regular units that can be used in 40k and gives them a big official stamp on them so people can’t use the ‘its not official’ bull that was once prolific on the internet. So this book isn’t just for the tread heads with the big tanks, everyone can use it if you have brought a forgeworld model.  Except if you bought sisters of battle stuff, forgeworld think you can shove that up your arse. So what does the book contain?

Each race gets a vast number of new units for use in both Apocalypse games and regular games of 40k. While the date sheets are quite nicely presented, it just doesn’t stand up to the regular Apocalypse books presentation. It’s a shame but it’s not bad by any stretch.

The marines get two formations, the Thunderhawk Assassination force which consists of 1 – 3 thunderhawks with marines on board. Their task, assassinate a high command, unit or formation. I really like this formation as it’s fluffy and could be an awesome sight on the table. The second formation is the Dreadnaught drop strike. This formation unfortunately cannot be used with this book alone, as the formation needs to have 2 deathstorm drop pods, which are not found in this book. They were previously in another apocalypse book but as the book says, its not allowed to be used. A slight oversight by the forgeworld team? I think so, it was a little disappointing to see I must say. The first mistake found in the book, and unfortunately I can’t say its the only one.

A quick mention about the space marines is the Lucius Pattern Dreadnought Drop Pod. Now the rules for this drop pod just confused the hell out of me. While it has the drop pod assault rule is also has the Assault Vehicle rule. Unlike the regular drop pod it doesn’t state that the occupants have to disembark when it lands, and the assault vehicle rule states that the dreadnaught can assault out of it, but not on the turn it arrives from deep strike. So wait a second, does that mean that the dread can stay inside the drop pod and count as being embarked? If that’s so does that mean it wouldn’t be able to be targeted? Its 65 points and does nothing over a regular drop pod, bar give its occupants shroud. What’s the point?

Chaos get some very interesting new units including the chaos storm eagle, and chaos thunderhawk gunship. They even get proper rules for a relic predator from the heresy era which survived to the current day of 40k. I do like these additions as they should have always had these models as it made sense.

What impressed me even more was the chaos titans, the marks they can have now is rather scary. If you give a titan the mark of Nurgle, the titan will gain ‘It Will Not Die’ so that HP 18 reaver titan will be VERY hard to kill, regaining 1/3 of its hull points back each turn. Very scary. While the apocalypse book has Daemon lords, this book has the proper special rules for each daemon.

Again I feel there is a rules confusion with the plague hulk, it can swap its Iron Claw for a master crafter sword for X points. Why would you pay to have less strength, less ap and 1 re-roll to hit? I feel some one though you could re-roll all of your hits, which if it was the case I could understand the price.

The most interesting thing about the necrons is they have 3 Massive fortification in the form of the Tomb citadels. I never expected them to use the tiles as fortifications but its interesting. You can have 1, 2, or 4 which does various things in game. Just the fact they are using them in game surprised me.

Eldar remain rather unchanged with most things staying the same, even the mistakes they had from aeronautica. The biggest thing for me was the price hike of the Lynx, while I'm sure they had a reason for doing this I don’t get it. They increased it by 100 points and reduced its armour. Granted the rules change of the scatter laser makes all the tanks scary, which could be potentially devastating. Giving the lynx twin-linked is nice but 100 points? Not sure about that.

The eldar flyers still have supersonic and hover, but the rules don’t allow supersonic flyers to go into hover mode. Without a special rule allowing this you have two flyers paying for a rule they just can’t use, even worse for the flyer with a transport capacity.

Orks get a fair few units but the major change I see if the Big Squiggoth, a model I used once as it was a steal at 50 points, but now has gone up to 180ish. This is more than fair as it got a 3+ save and many new special rules. I like the change to this model as it makes it more powerful at a fair price. The tanks like the kill bursta and get a few minor changes again which feel fair.

Tau flyers all get more armour for some odd reason, but everything happens for a reason oddly. The only other change is the orca drops it’s points by 100. The rest is the same.

For the tyranids the major thing that is added is the Bio-Titan biomorph upgrades which turn a horrific titan into an absolute monster (pardon the pun) as the upgrades make it pain scary, it can have acid blood so if any one wounds it in combat you place a large blast template and every one under it takes a wound, no armour saves. Or it can transport units or even have a skyfire gun.

This additional warzone is a very basic version of the 3 imperial armour books but it gives you a good overview of the 18 year war. You get 7 pages of fluff which is a good read, just a shame its so compact. You get new unnatural disasters, finest hours and special characters. 3 New scenarios are included allowing you to recreate 3 battle during different times in the war. They are very fluffy battles and I would love to recreate them one day. Unfortunately you can’t use any of the characters or rules out side of varks as the book deems them unsuitable for games out side of varks. It’s shorter than the apocalypse warzone: Armageddon but its still a nice addition.

Over all I would say that if you have the models or just an interest in the forgeworld stuff this book is defiantly for you. Its very well presented and has some good bits of fluff to read. Unfortunately like all warhammer books there are errors, confusions and some plane wrong rules which dont interact properly. But the book is primarily for the use in apocalypse which is far from competitive and the calm nature of the game allows you to paper over the cracks. Strangely enough while some of the air craft are in this book the majority are not, the Aeronautica book is still valid as its not mentioned as being invalid so its still useable. Some of the flyers are upgraded, some are not. So you will still need 2 books for everything . But still who doesn’t love owning some beautiful books like this.
Posted by Malduran
Labels: Article