When Craftworld turns on craftworld, the tears of Isha flow freely. This is a game between my Dem-Kirath Eldar and a friends Iyanden Eldar. Codex vs Supplement, Wraith vs Guardians, numbers vs a big ass scary wraithknight. The mission is Emperors will with dawn of war deployment.

This is the second game with my Guardians force 1495 points

And my opponent brought a wraith heavy Iyanden army with the supplement.

A small, hard army and not a single poison weapon in my army list time. The list is somewhat different to last time I played it and the addition of the 3 shadow weavers was very surprising. This is a somewhat worrying list for my elder.

The mission we rolled was emperors will with dawn of war deployment. The battle field was quite a sparse table with little terrain to hide in bar a ruin in each deployment zone. A few rocks were in the middle with a lot of hills able to block line of sight. I lose the roll to select deployment zone and have the smaller ruin. We place the objectives and my opponent placed his in his ruin and I for some reason put it behind a barricade… why I didn’t put it in my ruin I don’t know.

I won the roll for first turn and set up first. I placed my dark reapers into the top level of the ruin, the guardians with seers go behind the barricade to hold the objective. Both wave serpents go on the right hand side. The war walkers are placed on the hill in the centre of the table and the warp spiders go far left. A very spread out battle line but I hope I should be ok. Crimson hunter is in reserve.

He deploys his army very central, with the rangers and wraithguard in the ruin. The wave serpent and wraithknight go on my left and the weapons batteries behind the ruin. The wraithlord goes on the right hand side of the ruin. 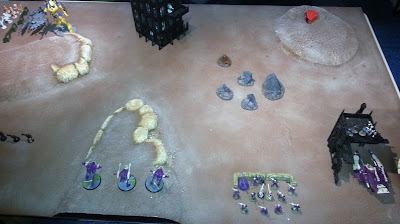 He may have stolen first turn but at least I have night fight turn 1 to hopefully reduce the pain I will accept. The spiritseer casts voice of twilight giving all the wraith constructs battle focus. On the left the wave serpent moves towards my warp spiders, and the wraithknight jumps forwards to join in the offensive. On the right the wraithlord moves forwards a little to get better sight.

The first shot of the game comes from the wraithlord, a bright steak though the night hits the war walkers. The scatter laser hits first, twin linking the lance, and it manages to wreck 2 of my walkers. It then runs back towards the ruin. Unloading all 3 weapons (snap shooting the shuriken cannon) on the warp spiders, the wave serpent kills al of the warp spiders in a single volley. So many wounds I couldn’t save them all. To finish the turn the wraithknight kills off the last war walker. That’s a bad start for me.

With night making targeting difficult the only unit in sight of the dark reapers are the rangers, so shooting swarmstar shots they bring down a single model. Both wave serpents go flat out getting into the enemy deployment zone. 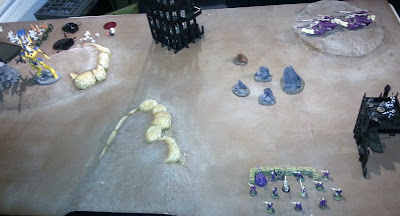 No reserves come in this turn thank god. Again casting voice of twilight the spiritseer enlivens the nearby wraith constructs. The wraithknight jumps towards the guardians while the wave serpent goes into my deployment zone.

Going flat out, the wave serpent moves it to my board edge and turns so its rear can’t be targeted. Suncannon shots streak towards the guardians and 2 of the 3 shots lock on with the 3rd only scattering a few inches. Because of the position of the knight only 1 or two models get a cover save and by the end 6 guardians, the weapon platform and the spiritseer (after a unlucky look out sir) are all destroyed by the shots. The wraithlord shoots at a wave serpent but fails to do anything thanks to jink. And to finish off the turn the shadow weavers target the dark reapers but 2 of the 3 shots scatter off and only 1 aspect warrior dies to the barrage. 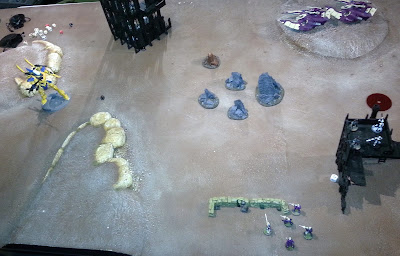 Again the farseer casts guide on the dark reapers and this time manages to fortune his unit (it might help). The crimson hunter comes in from reserve behind the wraithknight and the guardians that are left secure the objective again. Both wave serpents move to target the shadow weavers.

Attacking it from behind the crimson hunter manages to deal 2 wounds to the wraithknight, while the dark reapers seeing an opportunity target it as well and deal a further 2 to it. Both wave serpents target the vauls wrath weapons battery but only manage to deal a single wound. Not a good turn. 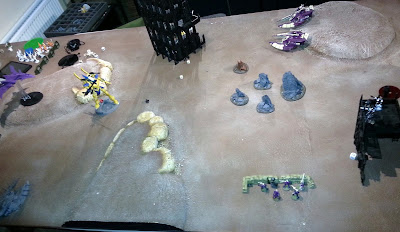 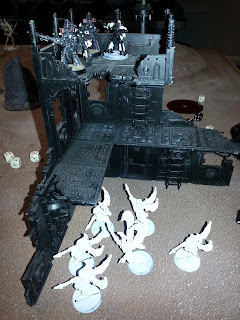 Heralding victory the swooping hawks appear and are placed by my ruins. They drop their grenades on the guardians but only kill 2. The wraithknight jumps back towards the spiritseer who casts renewal on it gaining an extra wound. The wraithlord moves towards my wave serpents while his serpent moves towards my crimson hunter.

Starting with the wave serpent, it targets the crimson hunter and manages to get a single hit after firing all 3 of its weapons. I evade and fail and get shaken. The wraithlord glances a wave serpent with its bright lance (thanks to the serpent shield). Intent on finishing their pray the hawks shoots at the guardians and kill off the remaining ones plus putting a wound on my farseer. Wounded the wraithknight runs behind the ruin to not get shot at while the shadow weavers target a wave serpent and manage to hit both but the tanks jink out the way.

Assault phase and the wraithord attempts to charge the closest wave serpent but fail to make it. 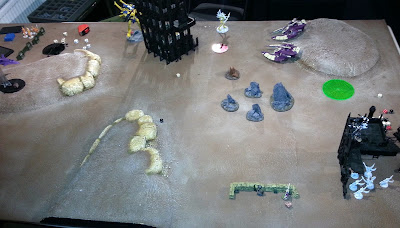 The farseer casts fortune on himself and guide the dark reapers. Intent on not failing the Dem-Kirath cause, he goes straight for the hawk lest they provide more problems. Again the crimson hunter follows the wraithknight and the wave serpents move forwards and the storm guardians jump out after the wraithlord. 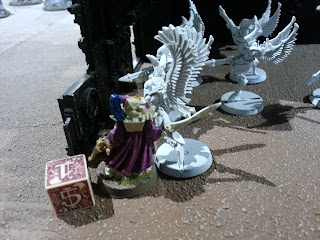 Somehow the crimson hunter manages to wound the wraithknight despite needing to snapshot. Being able to see it though the ruin the dark reapers take careful shots and manage to get their missiles to streak though 2 sets of windows and kill the wraithknight! 2 fusion guns, a singing spear and some pistol shots are thrown at the wraithlord but it only suffers a single wound. A wave serpent gets desperate and shoots at the wraithlord but fails to wound it while the other serpent kills off the wounded weapons platform.

Assault phase and the farseer charges into the hawks and takes 2 overwatch wounds but thanks to fortune they are shrugged off. He issues a challenge and the exarch accepts but both combatants fail to penetrate the others armour. 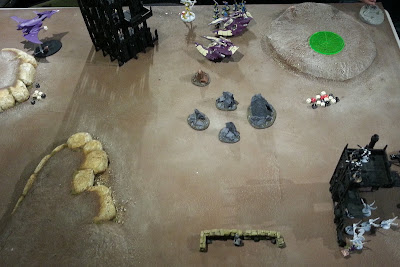 In comes the crimson hunter and it goes behind mine thanks to some sneaky deployment and vector dancing. The spiritseer again casts voice of twilight. Slowly advancing the wraithguard leave the ruin and go after the storm guardians. The wave serpent chases my crimson hunter.

Starting with the wave serpent it manages to get a glancing hit on my crimson hunter after once again firing all 3 guns. The crimson hunter exarch then finishes the job wrecking my flyer and it crashes into the floor. The wraithguard run then shoots at the storm guardians and catch the wave serpent as well, 9 guardians die in the flames and the wave serpent explodes killing off the last guardian. The wraithlord shoots at the remaining wave serpent but fails to do anything. The shadow weavers target the dark reapers but they pass their saves. The rangers shoot at the dark reapers and a rending shot to the face kills an aspect warrior.

Assault and the wraithlord attempts to charge the wave serpent but again rolls low and fails. In the challenge the farseer kills the exarch but the hawks hold. 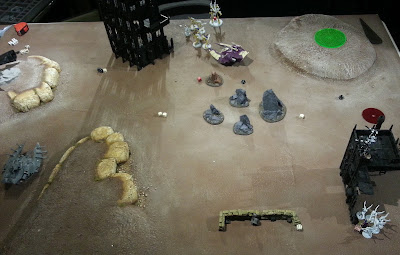 Again guiding the dark reapers and fortuning himself, the farseer fights on. The lone wave serpent drops out the guardian defenders next to the wraithguard.

The bladestorm from the guardians only manages to kill a single wraithguard… they are in trouble now. Attempting to aid the guardians the dark reapers shoot at the wraithguard with swarm star shots but fail to get a single wound. In a desperate attempt to kill the guard the wave serpent shoots as well, but only kill 1.

Assault phase and the number of attacks from the swooping hawks is enough to bring down the farseer kicking and screaming. I lose my warlord. 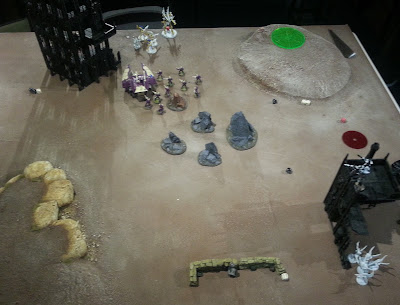 The army converges on to my small remaining force, with the crimson hunter and wave serpent moving into the middle of the table. The hawks jump back to be able to target the dark reapers. 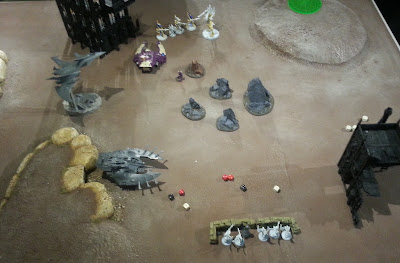 I have 1 model left, and so I have only 1 chance to win. I move my guardian towards the rangers and shoot at them doing nothing. I measure the distance to the rangers and he’s in range of the rangers… he fails to make the 11 inch roll.

We roll and the game carries on and my lone guardian gets killed by the wraithguard who all flame the little guy.

Tabled by another elder army, that could have gone a lot better. I know I made a few mistakes that game and if I didn’t make them I might have been able to pull out a sneaky victory. The Iyanden list was hard to deal with, especially with such high toughness models across the board. So let’s look at all the mistakes that  I made:
·         Deployment: I massively messed up my deployment and that cost me dearly. By having both the war walkers and warp spiders on their own in the middle of nowhere. If he didn’t steal the initiative they would have had 1 round of shooting before they died. The amounts of points invested in them I shouldn’t have abandoned them that way. Also having the guardians behind the bunker instead of in the ruin was stupid, better cover save and not being murdered by the hawks would have been the better choice. Stupid, stupid deployment.
·         Target priority: I wasted a lot of shots on the shadow weavers instead of targeting the troop choices. If I went after the wraithguard and rangers at the least I would have reduced the pain my guardians would have felt. He only had 2 troop choices and I should have taken them out.

Those were the big 2 issues this game. Looking back over my performance it looks like I have only just started playing; it was such a bad performance. The list needs a few tweaks here and there but more than anything the reason I lost this game was because I played like a fool.