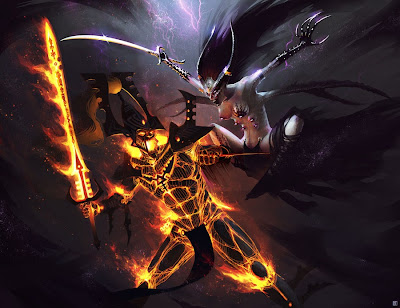 In about a month I will be going to an 1850 point tournament, this will be the second tournament I will have attended and the first time I have properly played at the 1850 point level. Looking at it right now I don’t think it’s a great idea. So I need your help reviewing my list etc...

As far as I am aware the tournament I will be attending is not very forgiving, I am expecting a lot of hard armies to face and while I’m not aiming to win, I am hoping I won’t get tabled every game. The missions are to be revealed on the day so I have no idea what I will need to win. So going in totally blind this is the first draft of my army list that I have come up with.

The list has a little bit of everything, I don’t know what I will be facing so I would rather have a little to deal with anything rather than have a blatant weakness. Granted if I come across large amounts of spam I will die I.E. 3/4 Heldrakes or 3 Riptides/Wraithknights. Indeed flyers of any description will make the game rough for me as all I have is a crimson hunter and quad gun. Granted if I guide the war walkers or dark reapers I have possible back up anti-air but I wouldn’t bank on it. Again any 2+ armour spam will be a struggle for my list but I hope I have enough shots to bring them down slowly.

The basic plan is to set up the defence line in my deployment zone and have the dark reapers and lance guardians hold it. The farseer and spiritseer will go with whoever needs them. Both wave serpents will go up a flank and act as a kill team (hopefully) and take out a scary part of the enemy or at least hold a flank. The war walkers can either hold back or outflank if the need arises. Hawks will deep strike behind enemy lines and hopefully grab me line breaker later on in the game, they will target units behind a defence line or in cover with their blast. Warp spiders will join the kill team. Crimson hunter is on anti-air duty unless they have none in which case goes after scary units.

Now I was tempted to give the exarch starcannons, while it’s not the best at taking out flyers they have the ability to glance the hardest and thanks to the re-roll could do it. This then gives them the ability to kill troops as well thanks to the extra shots. Not sure though... what are your thoughts?

I would really appreciate help from all of you, and especially regular tournament goers. I am under no illusion I will do well but it would be nice to stand a chance. And if you could give me examples of what kind of armies I could be facing, that would be amazing.

Thanks for any help.
Posted by Malduran
Labels: Army List, Eldar