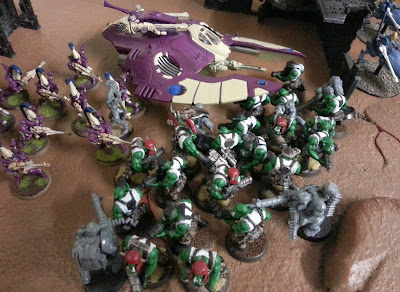 Once again I take out my eldar with dark eldar allies force out for a spin and end up playing against an Ork force. The game is emperors will (1 objective each) with hammer and anvil deployment, so the game is not quite what I was hoping for as not much room to move makes Eldar a sad army…

A very different ork list to what I have fought in the past. Previously it was all boys in battle wagons, but this has a few more targets, and a unit you don’t normally see in an ork force, Tankbustas. I have a fair few tanks so they will have plenty of targets unfortunately.

Rolling for mission we get Emperors will, with hammer and anvil deployment, not quite what I want as it will prevent my movement with bikes, not something I need against a horde of orks. Rolling for deployment zone the orks win and select the right hand side. Again the orks win first turn and set up first. Both boy mobs set up on his left flank (well from the centre to the left), effectively stopping me moving that way thanks to the sheer number of models. Between the two mobs the warboss’s trukk is placed, ready to speed straight towards my lines. The two looted tanks go centre, the one with tankburstas go in front of the other. Kannons are placed on the hill to have a dominating view of the table and finally the storm boys hide behind a bastion.

I was rather unsure what to do against this army but I went with my gut feeling anyway. On my left I set up my warp spiders with vypers hiding behind a ruin, the venom was placed behind them. In the centre the ravager hides behind a ruin. Slightly to the right I place my beastmasters, I hide the wave serpent behind the tower and the farseer in placed far right, hiding from the kannons but still able to see the boyz. I reserve the two bikes and shining spear unit. 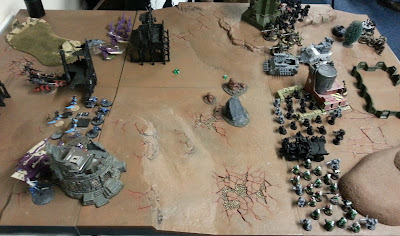 Before anything else the roll to see if the orks in the looted tanks are behaving themselves, they are this turn. The looted transport moves straight forwards 12 as does the trukk on the other side of the table. Both boy mods hoof it on foot trying to chase the trukk. Taking to the sky the storm boys move 16 inches straight towards the warp spiders.

Shooting phase and the boys both run forwards, one running 6 inches, the other running 1. Making the loudest noise, the boom gun on the looted wagon targets the warp spiders, it scatters 8 inches and lands harmlessly somewhere else. Snapshots from the tankburstas streak towards the vypers and 1 hits, penetrates but thanks to hiding behind the ruin I pass the cover save. Frag rounds from the kannons smash into the warp spiders and inflict 5 wounds, but I pass all the saves. To finish off the phase the trukk goes flat out.

The storm boys are close enough to charge the warp spiders and declare a charge, 1 boy dies to over watch then they fail to make the charge. 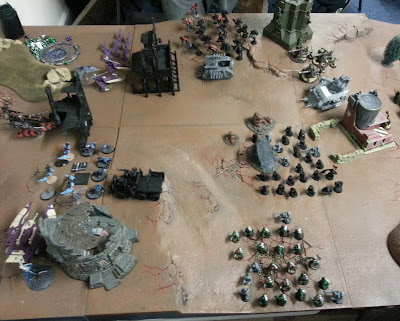 Psychic powers to start, the farseer casts terrify on the closest boy mob and they fail to deny the witch, they pass their leadership test though. More importantly now the orks aren’t fearless I can cast hallucination on them, which again isn’t denied, and they are pinned this turn. Now I can move, and the venom moves to face the storm boys, as do the warp spiders. Moving back the wave serpent faces the trukk, and the beastmasters move forwards to charge the trukks contents when it gets wrecked. The ravager moves a little to face the looted tanks. To finish the phase the farseer moves forwards.

Shooting and the farseer boosts 36 inches into this deployment zone. Unloading all 3 of its guns, the wave serpent shoots at the trukk and takes off about 5 hull points, wrecking it. We roll on the ramshackle table and it skids towards the beastmasters and they bail out. Unloading lance and shuriken, the vypers manage to deal 5 unsaved wounds, killing 2 nobs and wounding a third. Hitting the looted wagon with boomgun twice, the ravager gets 2 penetrating hits, and blows off both of the bigshootas off the tank. Combined shooting from both the venom and warp spiders kills off 10 boyz.

Assault phase and the beastmasters charge into the meganobz, the warboss issues a challage and the baron accepts. In the challenge the baron fails to inflict any damage but thankfully the barons shadow field holds up. The sheer number of attacks from the razorwing flocks gets enough rending hits to kill off the rest of the meganobz. At the end of combat the warboss takes his moral test and fails, he gets cut down by the beasts. 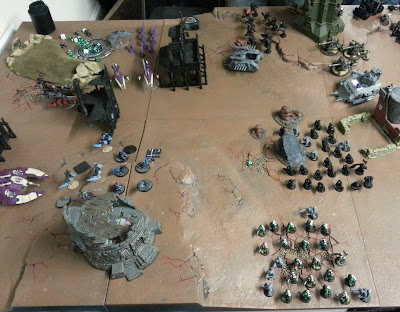 Again both looted tanks are fine, the tank bursters move towards the venom. The storm boys jump forwards 18 inches and surround the warp spiders and venom. The boy unit that can act moves forwards.

Slugger shots from the storm boys manages to kill 2 warp spiders somehow, and they fail their leadership test and run 7 inches. Shooting from the looted transports rokkits get 2 penetrating hits but the jink save prevents any damage. The tankburstas shoot as well at it and manage to wreck it straight away. Again using frag shells the kannons manage to lock on with all the shots and kill off a warp beast and a flock of birds. The looted tank targets the beasts as well killing 3 warp beasts. The boys are just in range of the beastmasters as well and combined shots from both mobs kill off 2 warp beasts and a master. 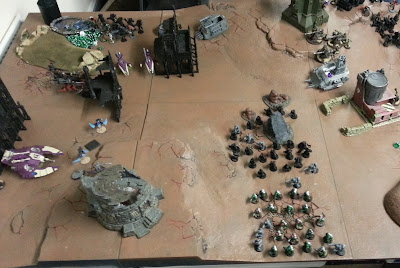 Shooting starts with the farseer casting puppet master on the kannons, they fail to stop it and a grot targets a kannon at the tankburstas ride, the shot its and explodes the looted tank in a single shot, killing 4 of the orks inside, they take a leadership test and fail, but the nob kills a boy and re-roll and pass, they fail their pinning test though. The ravage kills the looted tank and it explodes in a spectacular fashion. Shots from all the bikes and the vypers kill off the storm boys.

Assault phase and the farseer moves out of sight of the ork boys and the beasts charge into the boyz, but roll double 1 and fail. The overwatch killed a bird base. 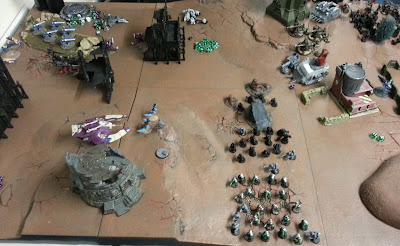 The boys move up towards my line.

The tankburstas release the squigs! And they both manage to explodes the vypers, removing them in a single turn. Shooting from the kannons destroys the ravager as I forgot to move him last turn, so no cover save. The ork boys unload their shots on the beast masters and the sheer number of shots kills the baron!
Assault phase and both ork boy squads declare charges, one on the beast masters (they fail the charge) and the other charges the wave serpent (again fails). That was some bad rolling. 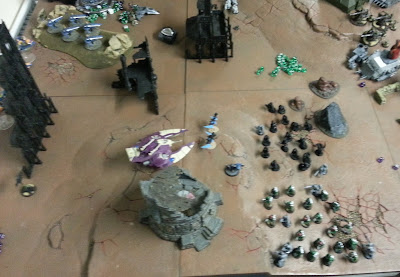 Again I cast terrify this time on the kannons and the grots run for it! I move the wave serpent back from the boys, the bikes all spread out, the spears go forwards, one bike squad towards the boys and the other moves towards my objective.

Shooting from the wave serpent kills 6 ork boys and the shining spears shoot at the tankburstas killing 2, they run for it.

Assault and the beastmasters charge the ork boys but they sheer number of shots from overwatch kills off the unit. 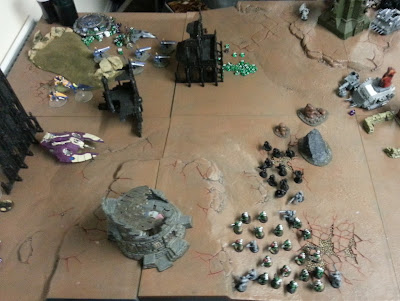 Not all orks are green, the tankburstas are yellow as they keep running (terrible joke I know). The boys keep moving towards my objective and in the shooting phase they run. 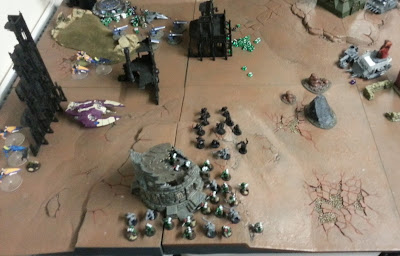 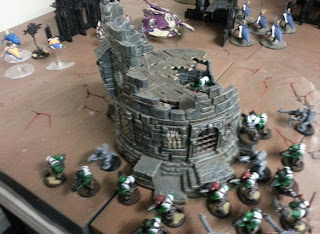 The dire avengers get out of their transport and face the smaller boy mob. One bike squad goes towards his objective and the others face the orks.

Shooting and the bikes boost towards the objective while the rest of the army kill the small ork mob in a single turn. 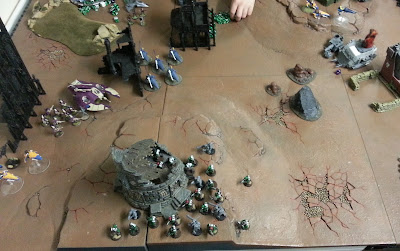 Again they move towards my objective and charge the wave serpent wrecking it in combat. 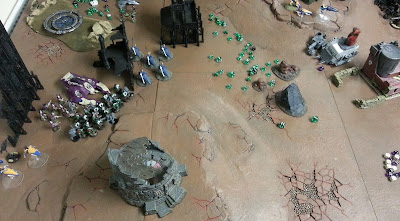 The bikes grab his objective and the other unit grabs mine. The spears go behind the orks.

Shooting from the army kills half of the mob off, then the dire avengers charge in first, followed by the shining spears. The nob issues a challenge which the spear exarch accepts and cuts down the nob with a single strength 8 wound. With my higher initiative I kill off all but 1 ork, who runs for it and gets cut down.

I table my opponent and win the game.

I am really starting to like my list, and the farseer is crazy when he has the right telepathy powers! Being able to remove fearless from an ork unit then pin it in place, was devastating. The bikes, I’m unsure about the bikes but they are doing useful things by staying in reserve. So what did I learn?
·        Reserve: Keeping the shining spears and bikes in reserve let me put them where I needed to when the storm boys started wrecking my face. I would never outflank the spears even though they have the ability, they are fast enough to get to where they need to without risking getting shot by interceptor shots. I really like them and will probably use bikes again.
·        Telepathy: it is crazy powerful, and in tournaments I will definitely use him, but I want to try other powers with him in future, still on the bike though.
·        Beastmaseters: I was stupid with them this game, they should not be running into squads with that many over watch shots, and even if I had go into combat I would have got ripped apart by the sheer number of attack the orks would have put out. I need to target smaller units, like the nobs.

Well I really enjoyed this game, and I hope it came across. Let me know what you though.
Posted by Malduran
Labels: Battle report - 40K, Eldar