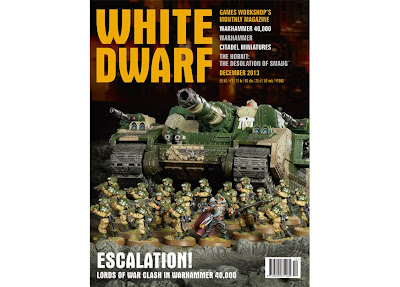 Well it’s December and a new white dwarf is out, i didn’t buy last months as it didn’t interest me, and I was very nervous about buying this months as they seem to be getting progressively worse. Regardless I took a risk and bought it on account of the release of Escalation and stronghold assault. I had hope that the white dwarf would give me an insight into the new expansions.

New releases this month are purely for the hobbit game model wise, we get a few new things which I assume will be in the new film, either way I very disappointed that it’s the only thing we get. Out of all of the models I am fond of the ‘Barrels out of Bond ’set containing all the dwarves and Bilbo in barrels as they escape the wood elves. It’s surprising how much character they have gotten into such little models, especially as it’s only the top half of them all.

Stronghold Assault is the first expansion the magazine goes over and unfortunately it doesn’t give much information on it. While it does give a little bit to peak your interesting its mainly pictures. Later on an in separate article 4 gamers talk about what they have added to their force and why its so great. It was a little bit more information but again not much. From what I can gather you can get several fortifications (such as 3 bastions and an aegis defence line) as a single fortification to use, and some of them allow for very large defences indeed, as they have added all of the wall of martyrs stuff as well. Rather interesting.

Escalation is the second expansion and the one that I am slightly more interested in. it allows you to add in a single super heavy or gargantuan creature into your army, and apparently adjusts the rules for super heavies so It is a little more balanced for ‘regular games’ but I doubt that. The same article form before goes on about using them in their army, and honestly from what they said they sound like they will dominate the battle field no matter which you use. It says each has at least one for each army, with both eldar and dark eldar having access to a revenant titan, which I don’t have, and don’t want to spend that much buying one. I would have hoped that the armies all had 2 or 3 choices (really easy for the imperial guard as they have about 6 in the bane blade kit already) to add a bit of variety. But it’s not to be.

Some big questions about the two expansions weren’t answered though which irritated me. The big one was are these just like cities of death and planet strike? Are they optional rule sets to be agreed with your opponent beforehand? Or have they changed the rules set all together so these are actually added to the regular rule book? It doesn’t explain…

Fantasy also get a book this month called Sigmars blood, it’s a little campaign book for recreating the battles between volkmar the grim and Mannfred von Carstein after the vampire returns to take his position as ruler of Sylvania. Apparently it has a few linking battles where characters can gain experience and gain new abilities to further aid in battles to come. It has back ground and suggested units to use but you can swap them out for ones you already own. Now I’m not up to scratch with warhammer history as it keeps getting re-written but I don’t think it ends well for Volkmar, I’m sure this is where he dies before the storm of chaos. Unless that was the daemons… I’m not sure.

No battle report this month as it’s a recap of 4 battles from a sigmars blood campaign. IT gives little to no detail about anything. It’s a waste of time I would say.

Army of the month is by 2 guys this time, showing off an army they build for a battle brothers tournament. It was a combined army of both warriors of chaos and beastmen. It does have some beautiful conversions including some chaos trolls and some off chaos ogres. Every single chariot is converted and it gives a very unique feel to the army. The paint scheme is rather cool, a bright blue and red colour scheme makes it really stand out.

Jarvis Johnson is off this month on holiday so it gives a real writer, Phil Kelly, a chance to talk about his inspirations and what it means to him. He also goes on about how inspiration ebbs and flows. IT was quite an interesting little article and made a very welcome change of pace from Johnsons bollocks, like I keep saying, just adding in different writers will keep it fresh and actually readable.

Vetock talks about how certain models seems to take on characters of their own when you name them and keep a record of what they have done in battle. It wasn’t his worst article in the world but I still think he needs a month or two off so he can come up with something relevant and give another guy some time to talk about the hobby.

And of course Blanchitsu returns this month which I didn’t mind so much after having a little break from him. He has some rather interesting conversions but I must say I still struggle to like the paint scheme.

The rest of the magazine is the same old stuff which I can’t be bothered going over, you can guess the rest. Painting and a few nice displays of armies. For the cost of the magazine I would like it to take more than a single sitting to read it, I had a glance over it when I got it and in about half an hour it was finished, now I’m a very slow reader as well so this just surprised me, and I’m rather disappointed by it. It just goes to show how poor it really is.