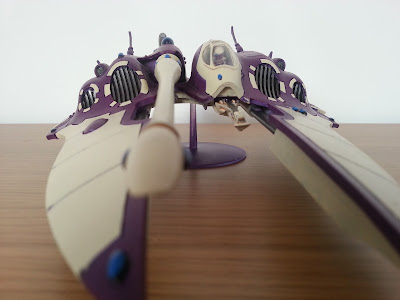 With the forgeworld PDF release the other weak it has opened up A LOT more options for us, as I am sure you are aware, as now practically every forgeworld model can be used in a game of 40k. As the only super heavy that I own is the Eldar lynx, this was a great boon to me. I have only used it once, in a game of apocalypse, which I didn’t think about using it, I just wanted a big D on the table, so now, I have to consider if I should take it or not in a 1500 point game.

So what is the Eldar Lynx? It’s a smaller super heavy vehicle compared to most, with only 6 hull points and its armour is a little less than desired with armour value 11 all around, so it’s quite a vulnerable tank if you let it take a turn of shooting. It’s a fast skimmer allowing it to move 12 inches but as it’s a super heavy it doesn’t get access to jink. To counter this it comes with Eldar titan holo-fields, so it get a little bit of protection, ignoring 1/3 of its hits if it’s stationary and ½ if it moves.

Weapons available to it of note are the Pulsar or the sonic lance. The Pulsar is a D weapon with 2 large blasts; the sonic lance is a hellstorm template that will wound on a 3+, so two very good options. Currently mine is made with a pulsar, but I can always proxy it as the other, I doubt any one will really care. You also have the option of a secondary weapon, it comes with a shuriken cannon as standard, but you can upgrade it to either a scatter laser, star cannon or bright lance, so it can aid it in whatever field it want to excel at. Personally I’m thinking of upgrading the cannon to a scatter laser to twin link either the pulsar or sonic lance. While re-rolling the scatter on the pulsar is nice, being able to re-roll all the failed to wound rolls on a hellstorm template just sounds REALLY fun to me.

An odd special rule that the lynx comes with is Sky Hunter, it allows the lynx to become a flyer for a turn allowing it to zoom but It can’t shoot any weapons while doing it. This gives it a great ability to redeploy or even just to get off the table for a turn and come on next to avoid getting shot to bits. While I can’t say I will be using this ability too much, it’s a handy trick to have up your sleeve.

The cost of the Lynx is 420 points, it’s pricy considering how easily it can be destroyed, but it’s an Eldar tank, it’s not meant to absorb much fire power (unlike a wave serpent apparently). However it can dish out pain very easily, and will destroy a lot of enemy units given a chance.  But which set up should you go for? I don’t know. If you want anti-tank I would say go pulsar/scatter laser and if you want to kill swathes of infantry the sonic lance/scatter laser is defiantly the way to go. 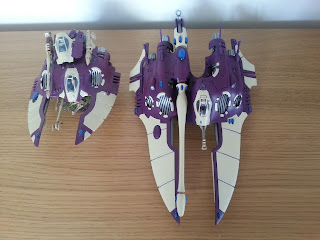 As my first attempt at including it in a army

I know that I have complained about strength D weapon in the past, but I haven’t actually faced them in escalation yet, so I thought it was best I see how they play myself before condemning them to hell. The rest of the list is rather fast, so if I need to I can redeploy the whole army quickly, but the Lynx does take up A LOT of my points, that could easily go towards an additional dark eldar allied force or just more guns. I will have to see how it pans out in a game or 2 before deciding.

I know this list isn’t the greatest, and This is a Helmet’s IG list would dominate it, but I think this list has merit, and I can use the wave serpents to shield the Lynx if I need to. But what do you guys think?
Posted by Malduran
Labels: Army List, Article, Eldar