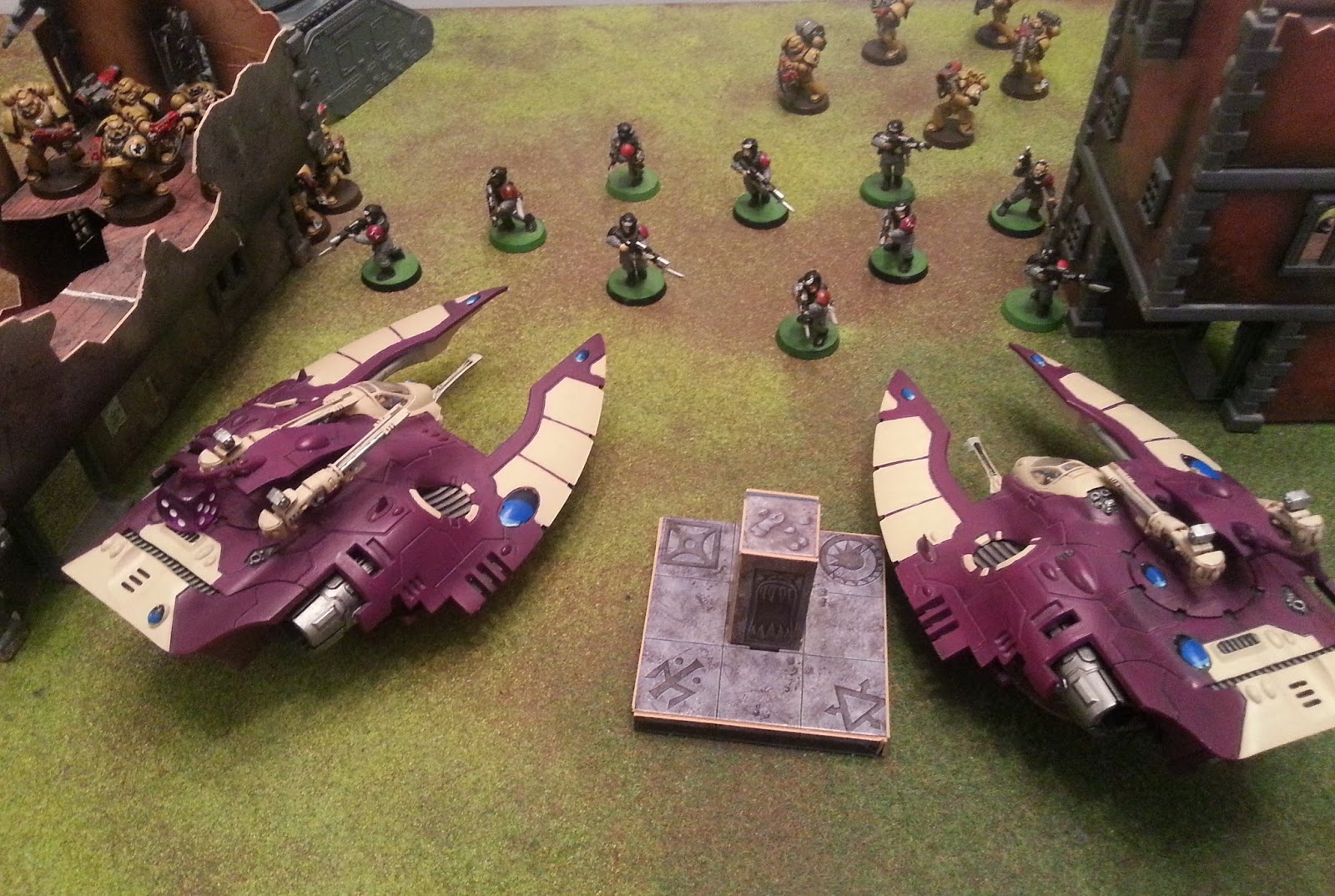 Using jink is the same for all units with it, when the model/unit with jink gets targeted by a shooting attack, before any dice are rolled you can elect to jink providing the unit with a 4+ cover save until the beginning of their next movement phase. The down side is that you can only snap fire until the end of their next turn, which while inconvenient is worth the model still being alive if you get shot by a nasty weapon. The rule itself is quite a simple one, and easily used an understood, until you start looking into it a little closer.

Now the first trouble we come into is with blast weapons. Let’s take an example of two individual land speeders next to each other, not in a squadron. If a blast weapon targets the first speeder it can elect to jink, which is fine but as soon as you roll for scatter, dice have been rolled. Now it the blast locks on its fine, but if it scatters onto the second land speeder can it still jink? Rules as written states that you must jink before any dice have been rolled, so does that mean the second speeder has to just accept the shot because the scatter has already been rolled? While this appears to be the rule I would say you should still be able to jink, it seems a little harsh on the second speeder, but if my opponent argued with this I wouldn’t have a leg to stand on.

The second little issue is with tanks, and I think this is more of an oversight than anything else. If you are a none-heavy skimmer you are allowed to jink. Now if a skimmer gets immobilised there is no rules stating that you are no longer allowed to jink. I can’t help but feel you shouldn’t be able to jink if you get immobilised, and in a game I wouldn’t pull that on an opponent but it is still possible. I believe this will eventually get an FAQ stating that once immobilised a tank can’t jink, and I wouldn’t do it as it feel wrong, but again, if my opponent wants to, nothing I can do about it.

Something a little rarer but totally legal, if you have a unit of bikes (they have jink) and they charge into a unit, they are allowed to jink the overwatch if you think there is a good chance you will get hit by some low ap weapons. As in the over watch rules it states that overwatch follows all the normal rules for shooting, that means you are allowed to jink. Now I doubt this will come up very often but it’s worth remembering, and don’t forget there is no downside to jinking before charging. And as an extension to this, you can jink an intercept shot coming your way, this will mainly be used for fliers though.

So what do you guys think of these points? how would you argue for/against them? I know I would argue against the first 2 points but the final one seems fare to me. I would love you input.
Posted by Malduran
Labels: Article