Space Wolves vs Grey Knights 1500: Duel for the Emperors favour 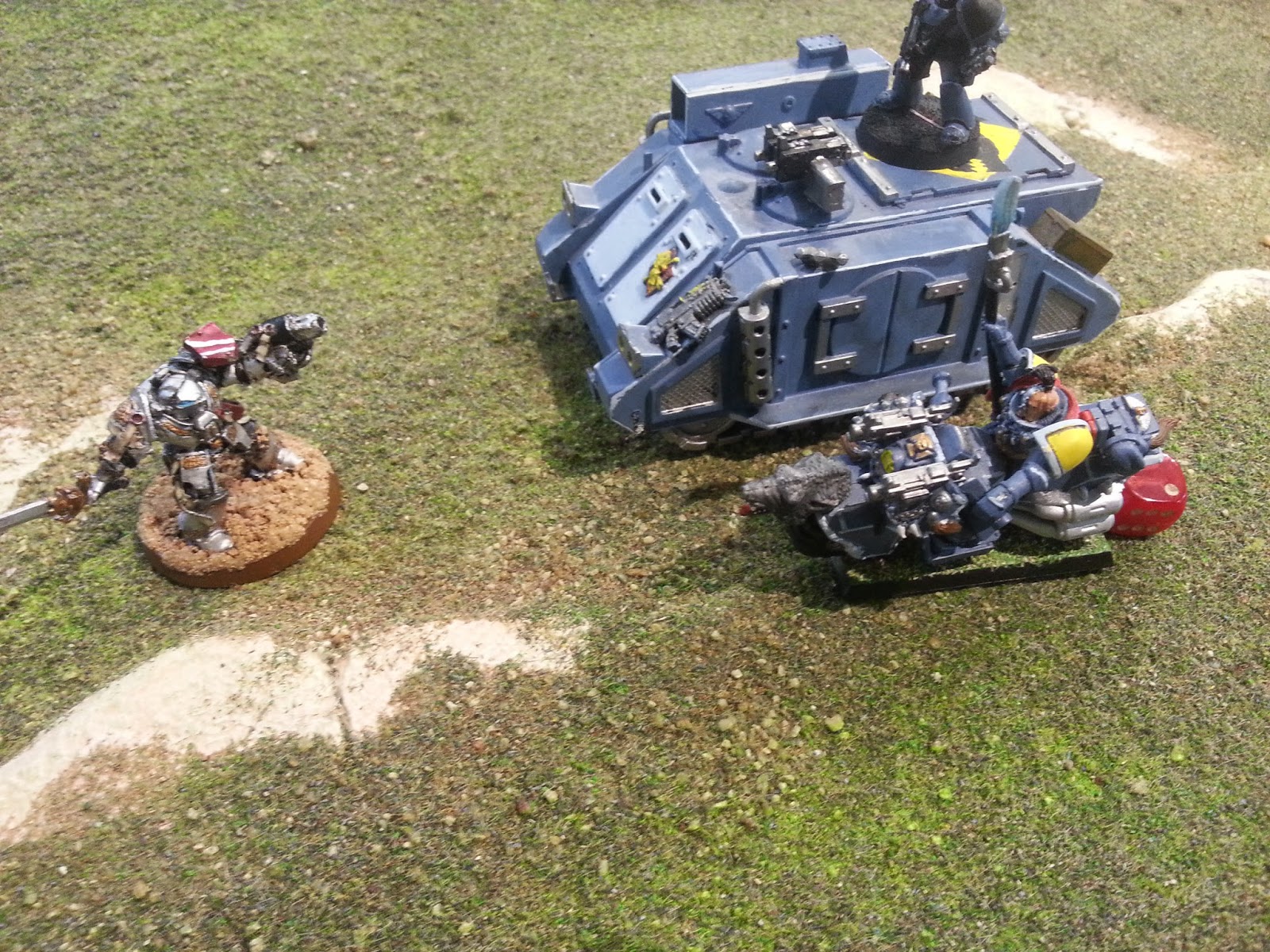 With the new release of codex space wolves, i had to give them a spin and the grey knights ended up being my opponent. Obviously my wolf lord has come under the eye of an inquisitor who isn’t too happy with his conduct and has sent in the big boys to deal with him. The game is a 1500 point game of crusade, with hammer and anvil deployment. 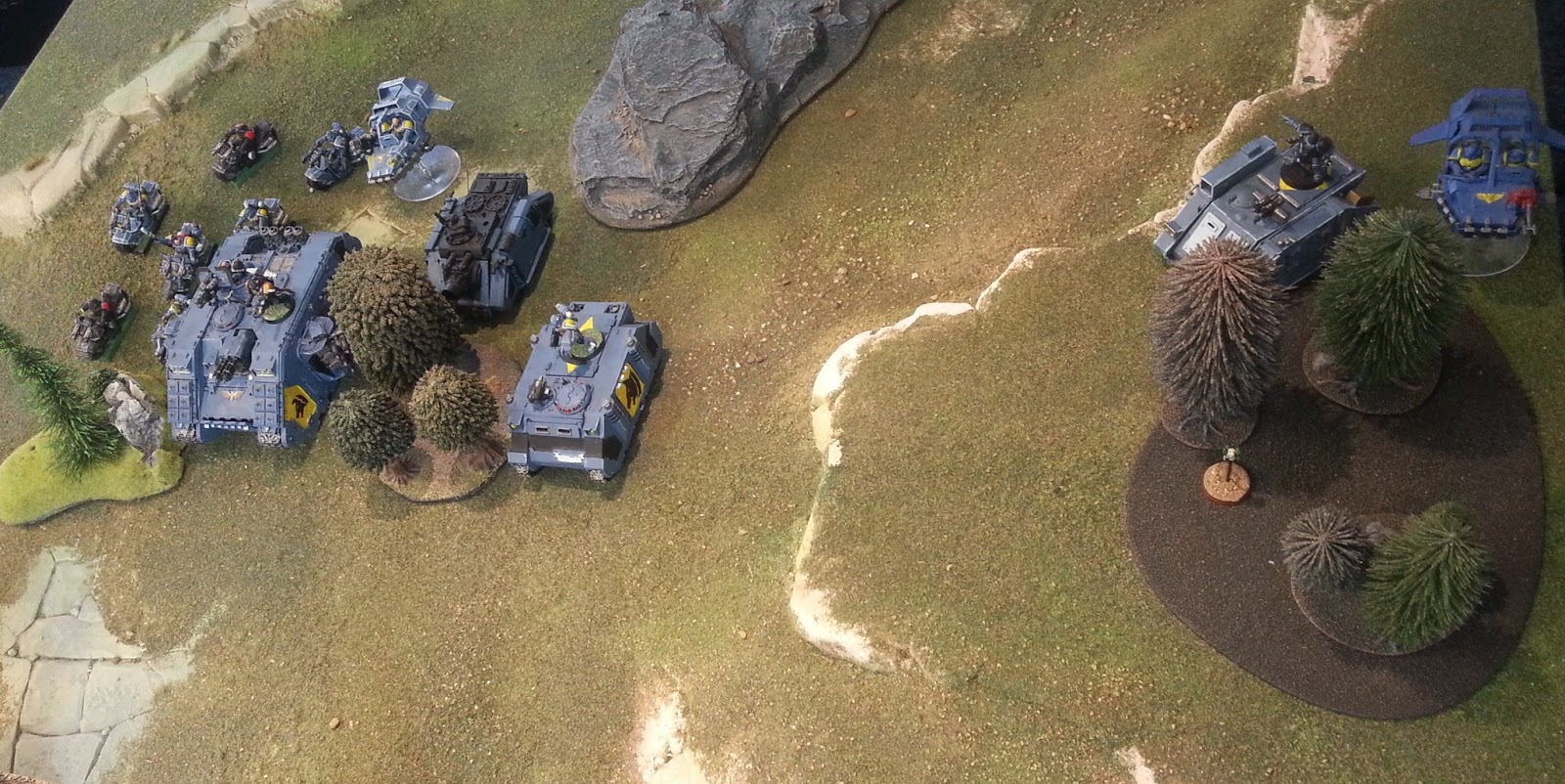 The space wolf deployment was quick, with the land raider centre stage supported by the rhino full of 10 grey hunters. On its other side the bikers deploy with a land speeder. Hidden behind the land raider the vindicator waits to make sure it doesn’t get killed before it can shoot. On the far side of my deployment the other rhino supported by the other speeder waits to see what it can do later in the battle.

To counter this paladins deploy on the right flank back a little to make sure they are out of range of the vindicator. The interceptors deploy in the cover holding the objective. On the right at the front the dreadknight waits to push forwards. On the left the grey knights and terminators supported by the dreadnaught deploy ready to advance on the wolves. 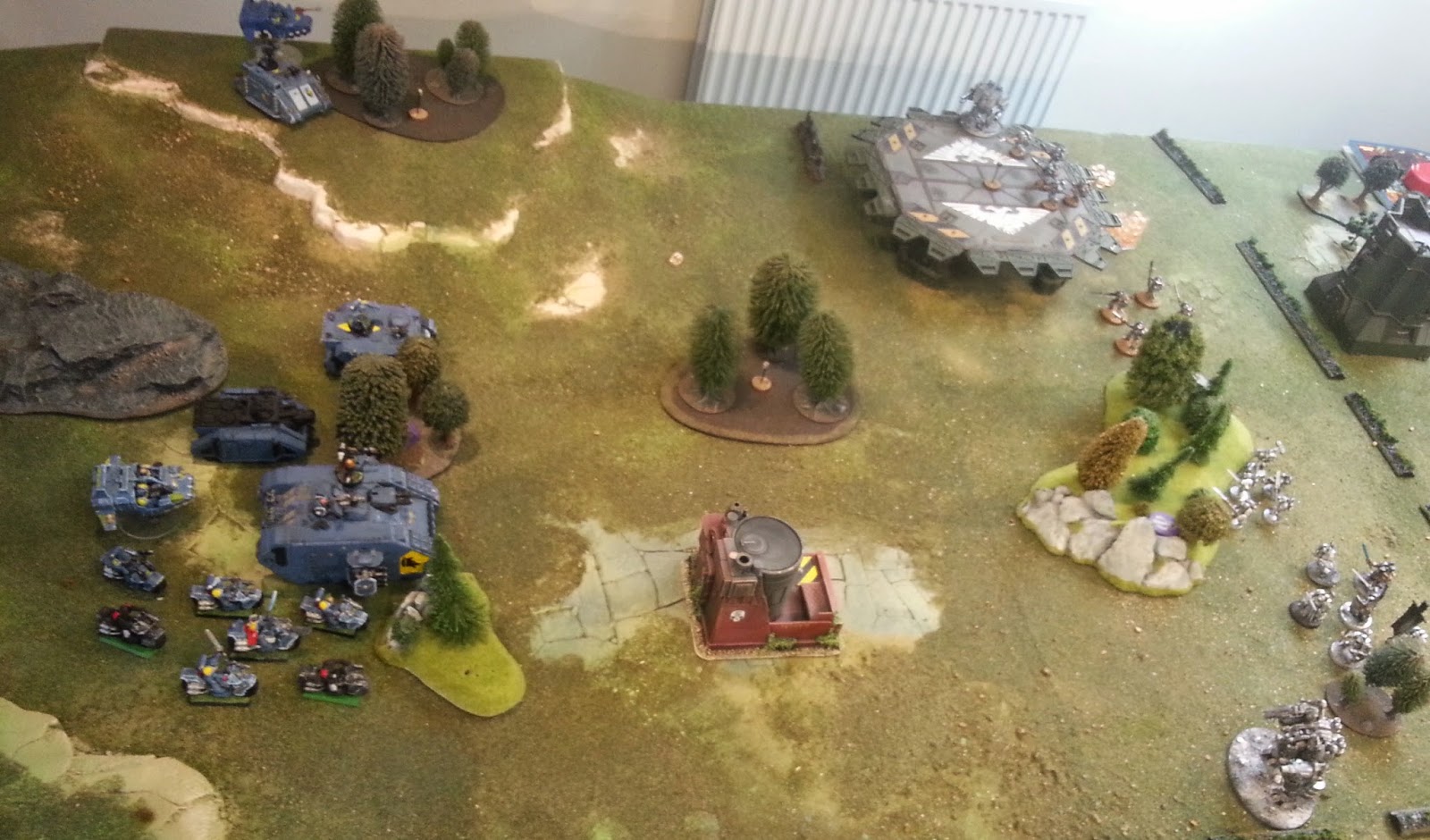 Moving forwards 12 inches, the dreadknight pushes towards the space wolf lines while the rest of the knights push forwards while the paladins still try to make sure they are out of range of the vindicator.

Aiming at the bikes, the dreadknight shoots at them with its heavy psycannon. Seeing the immediate danger the bikes jink, which is a good job and it gets 3 rending wounds. After cover saves a single bike dies. Shooting its lascannon, the dreadnaught attempts to damage the land raider but the shot scatters wide. 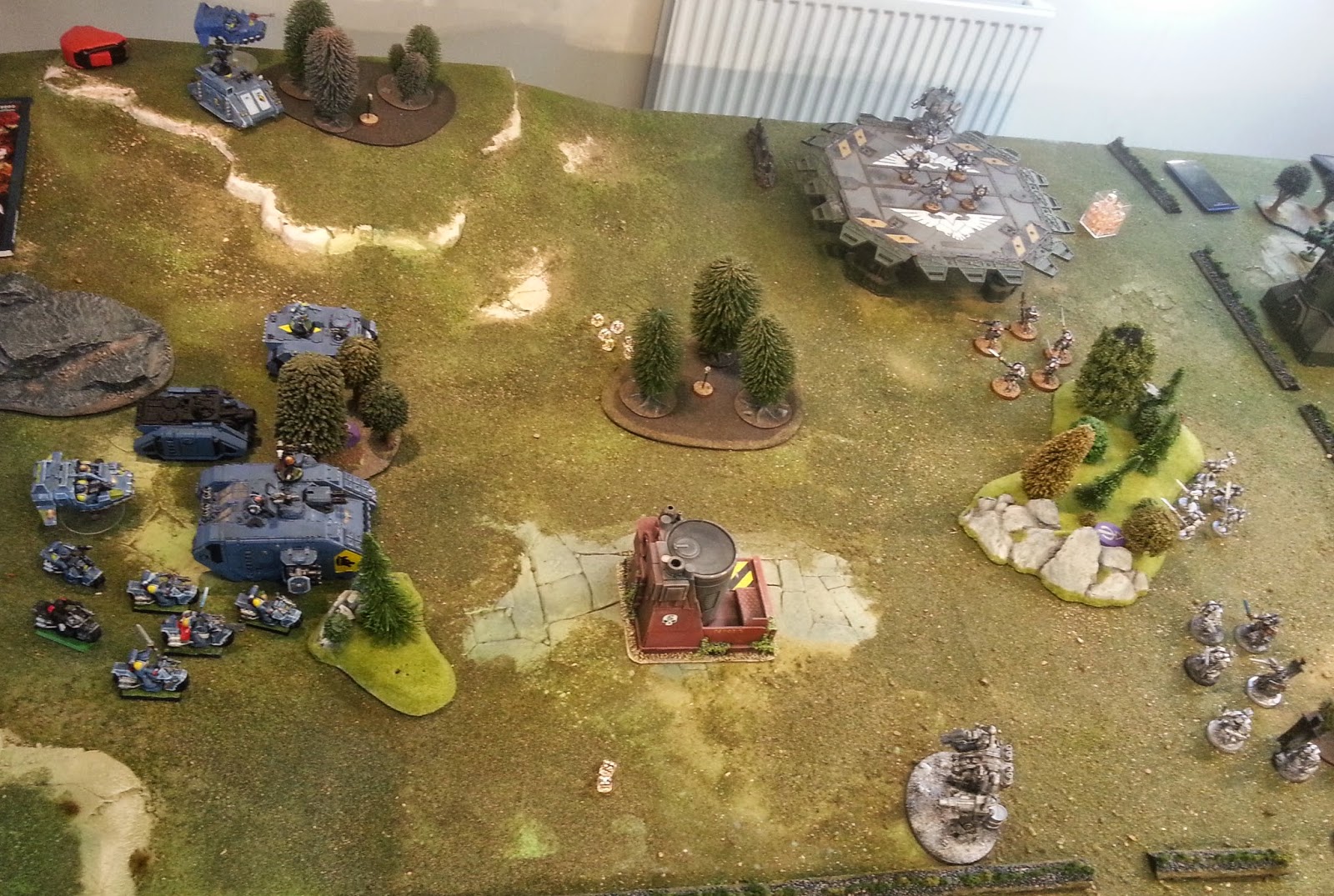 Unloading as much fire power as it can, the land raider crusader shoots at the dreadknight. In the end it takes 2 wounds, 1 from the multi-melta and another from a snap shooting hurricane bolter. The supporting speeder shoots as well at the dreadknight but its invulnerable save prevents it taking any damage. Going flat out, the bikes reposition and so does the other land speeder. Ending the turn the rhino uses its smoke launchers, hopefully to keep it alive next turn. 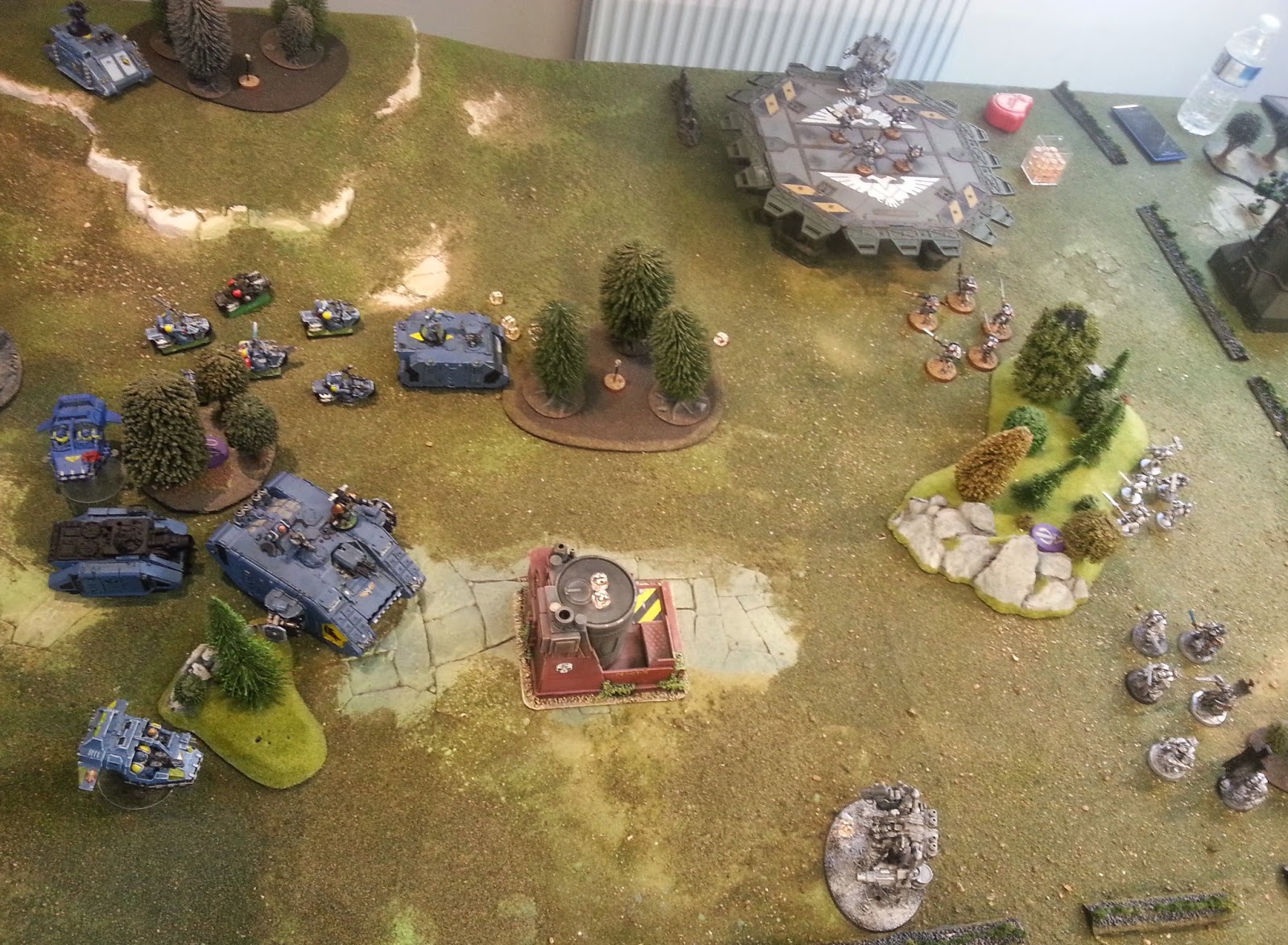 Demanding vengeance, the dreadknight goes straight for the land raider. The dreadnaught and strike squad move across the landing pad to get in range of the enemy. Advancing again, the paladins get ready to push the attack.

Psychic phase and its 13 dice to 6, the grey knights generate a fair amount of dice. But the knights don’t really have anything of use, just a few hammer hands on a couple of units.

Shooting from the dreadnaught targets the rhino but it again misses, it’s a rather unlucky dread. A torrent of shots from the terminators hits and kills a single biker. 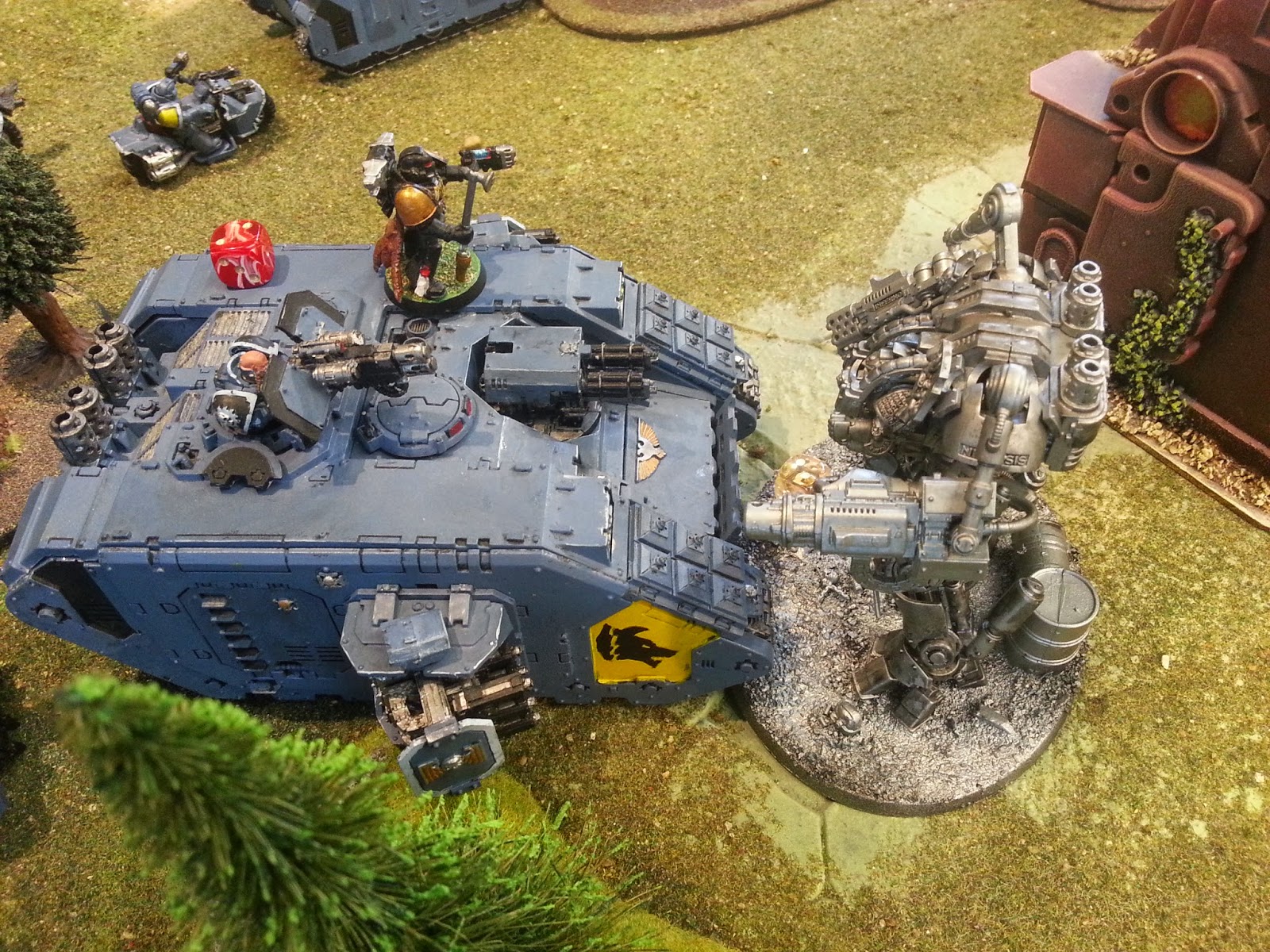 The blood claws move away from the dreadknight not wanting to loose any of their number assaulting it. Both land speeders encircle the dreadknight and the vindicator moves faces it hoping to be able to aid in killing it. The bikes push forwards and the rhino moves up 6.

Both speeders take a wound off the dreadknight killing the giant walker, and removing a large threat. The bikes unload at the strike squad and manage to drop 2 of the power armoured grey knights.

I moved the bikes a little close to the terminators who spring at the opportunity to attack them. Moving into the woods, the interceptors hold an objective ready for later in the game. Paladins move towards the blood claws.

Psychic phase and its 10 vs 4. The grand master casts psychic shriek on the blood claws and rolls very high, killing 4! The terminators fail to cast force on themselves, but cast hammer hand which i fail to stop.

Firing from their new position, the interceptors gun down 3 of the blood claws, including the power fist. The paladins shoot at a land speeder who jinks, and they take a single hull point off it. The dreadnaught shoots at the rhino and hits! But fails to even glance.

Assault phase and the terminators charge into the bikes, they fail to do any damage with overwatch. The lord strikes first but he blade just cannot get though the terminator armour. They strike back and murder all of the bikers. The lord runs for it, despite his re-roll and escapes. Consolidating, the terminators move towards the rhino trying to block them in.

Its cannon finally roaring across the battle field, the vindicator shoots at the terminators hitting 3, and 2 die. Snap shots from the grey hunters inside the rhino shoot back but miss the terminators. Rather desperately the blood claws pistol the terminators and down an extra 2. Trying to down a paladin, the unshaken landspeeder shoots its multi-melta but it misses.

Trying to take out the last terminator, the blood claws declare a charge but fail to roll enough. 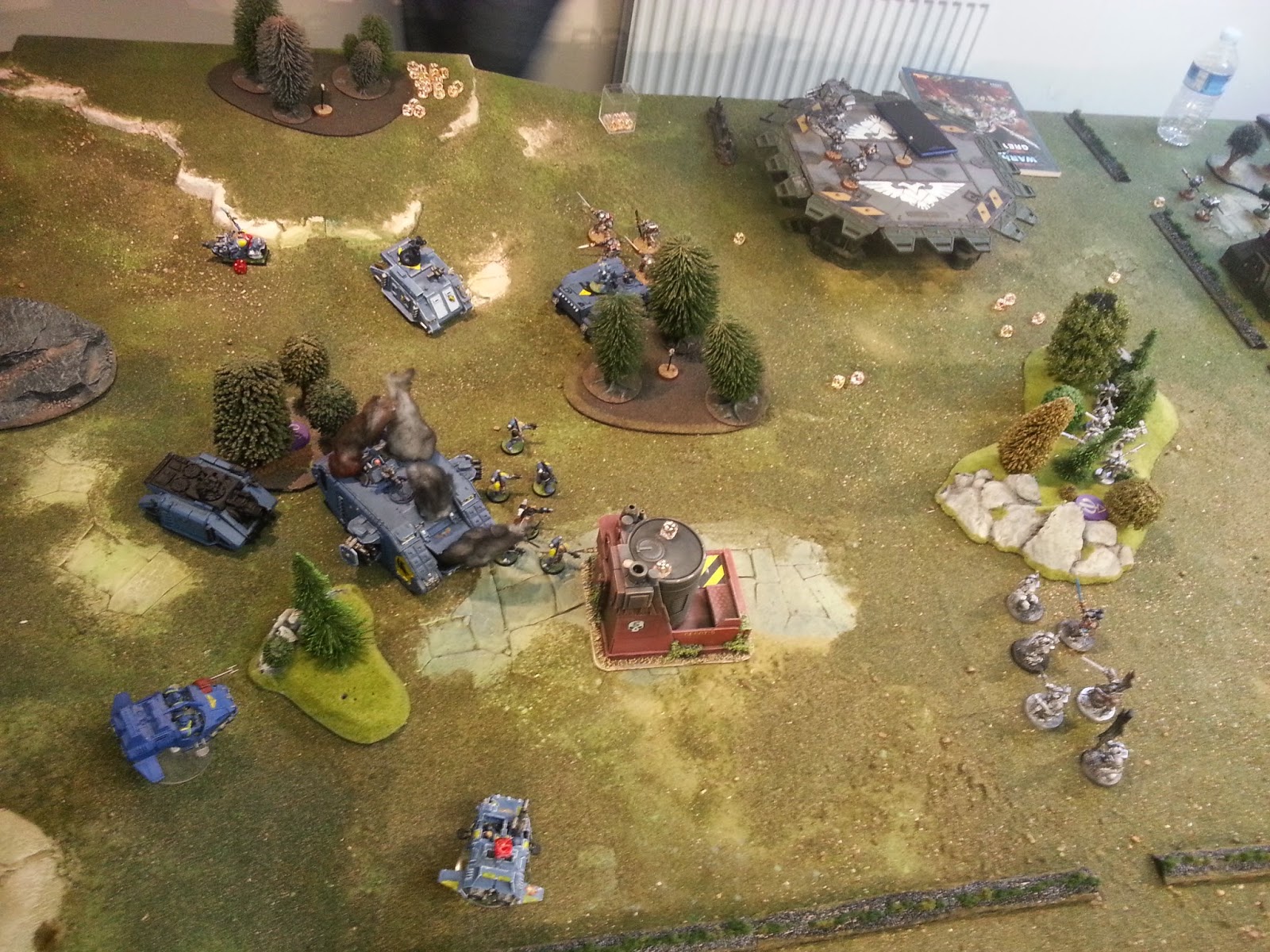 Not wanting to allow the wolf lord to escape, the lone terminator chases after him. Seeing the threat the speeders poses, the paladins move towards it. The strike squad jumps down after the rhino.

Psychic phase and the lone terminator gets both hammer hand and force off, potentially dangerous to the wolf lord.

Shooting from the paladins wrecks the lone land speeder. Again the dreadnaught fails to do anything, even though it targeted the vindicator this time. Another volley from the interceptors hits the blood claws and blows through the armour of 3 of the new recruits, killing them.

The lone terminator challenges the wolf lord and charges in, the lord strikes first but his flurry of blades fails to find a chink in the terminators armour. Striking back the lords armour also holds true, preventing him from getting instantly killed by force. The strike squad charges into the rhino and manages to get 2 shaken results, leaving it on a single hull point. 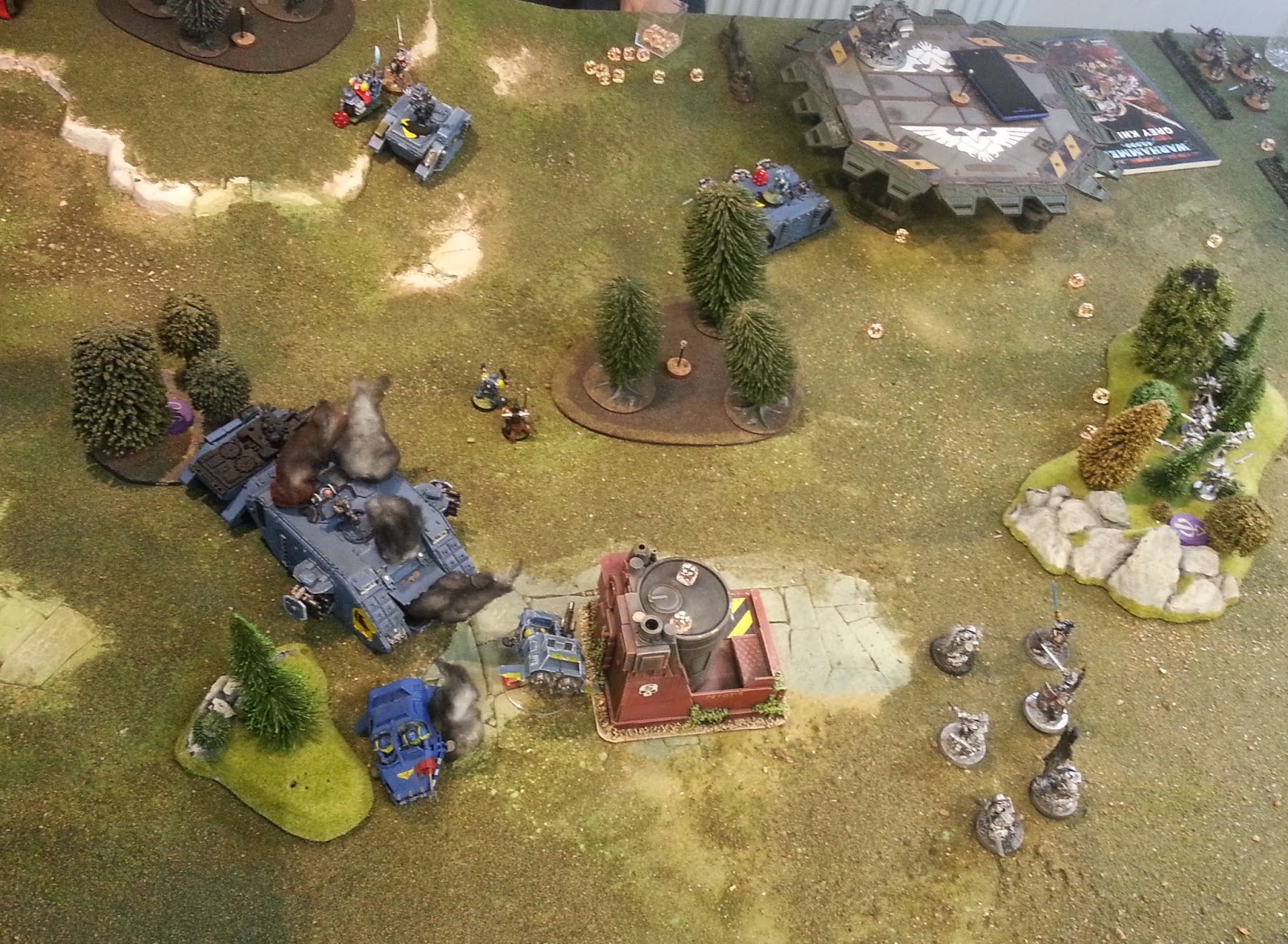 The paladins are in range of the demolisher cannon, so it moves to make sure it can get a few of them. Not longer shaken, the other speeder moves towards the paladins as well, hoping to kill one. Shaken but not out of it, the rhino turns and tank shocks 6 inches into the strike squad surrounding it, they fail their moral test and run for it, not wanting to get crushed under the tanks treads. With the grey knights out the way the grey hunters get out of the rhino and move on top of the landing pad ready to destroy the dreadnaught.

Both melta guns fire at the dreadnaught and get 2 penetrating hit, blowing off both of the walkers arms leaving it on 1 hull point and defenceless. In a desperate attempt to wreck it a grey hunter throws a krack grenades but it fails to do anything to its front armour. The battle cannon roars again and kills a single paladin, the speeder kills an additional 1.

The one on one fight between the terminator and lord, again ends with neither able to get past the other impenetrable defences. 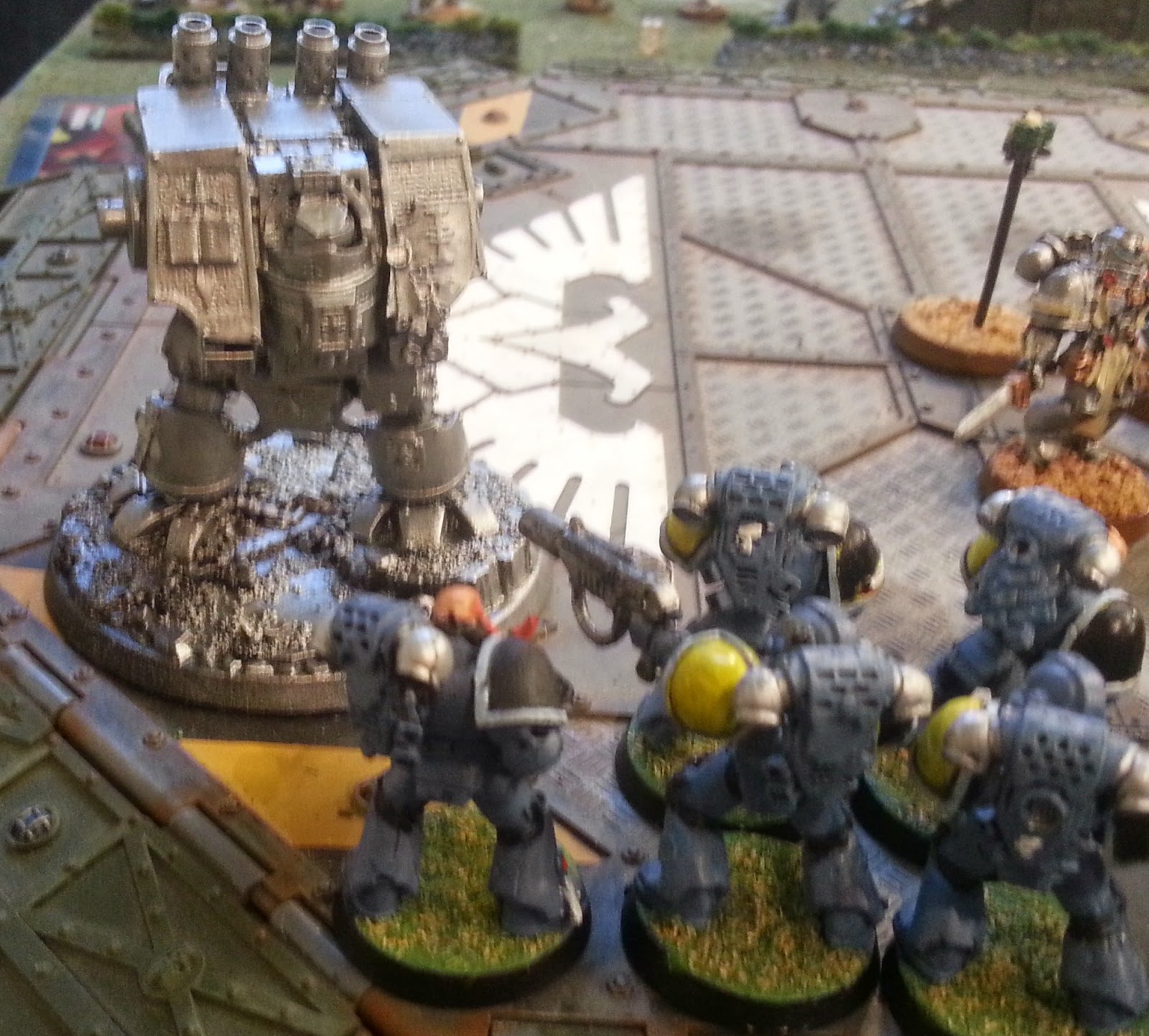 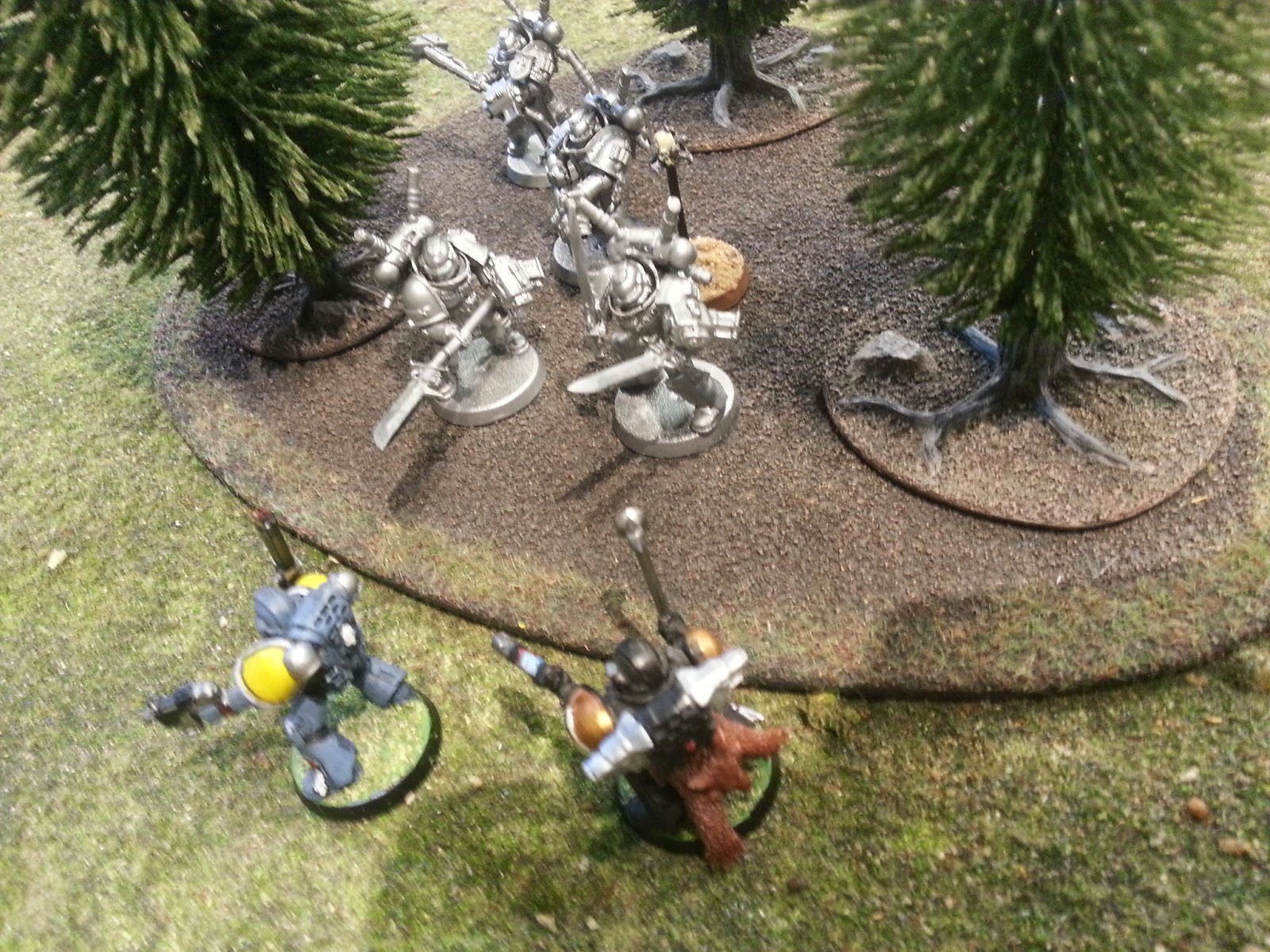 Psychic phase and again the lone terminator attempts to cast force but it fails. He then fails to cast hammer hand as well. The interceptor squad casts hammer hand which passes.

Again shots from the paladins shoot at the lone speeder, it jinks and survives. Interceptors gun down the last of the blood claws leaving just the wolf priest left. Firing their storm bolters into its rear, the strike squad attempts to damage the rhino but fails.

Assault phase and the dreadnaught charges into the grey hunters, they fail to stop it with over watch and i forget the unit has a power first. I try to krack grenades it but fail to get the last glance, and the dreadnaught fails to stomp any of the hunters. The strike squad charges into the rhino and wrecks it. Finally the terminator vs lord fight ends with the wolf lord finally getting his blade into a kcrak in the terminator armour killing his opponent. 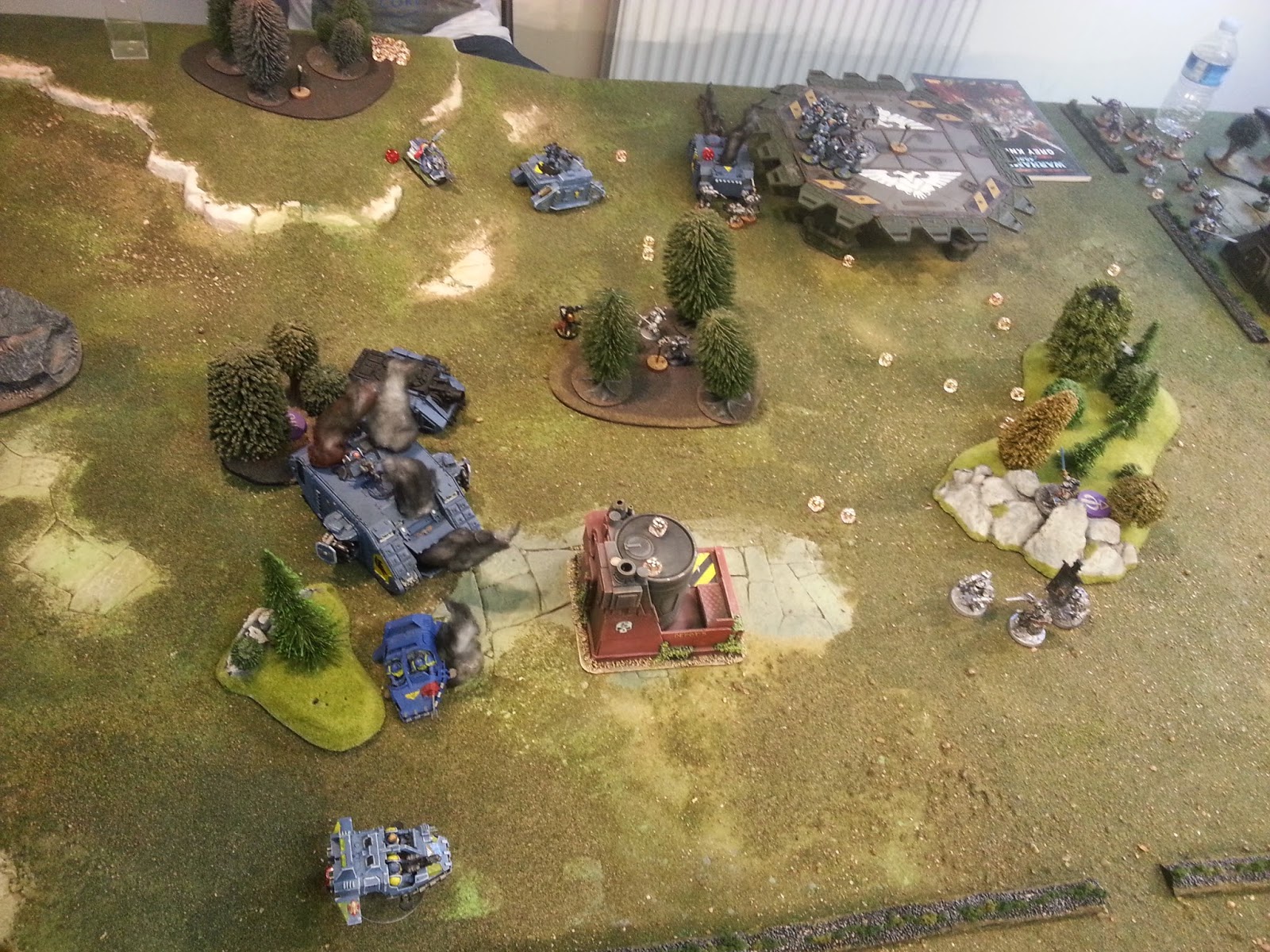 Getting out of their rhino the other unit of grey hunters disembark next to the strike squad, while the wolf lord and priest go after the interceptors on the objective. The speeder moves back to hold the objective allowing the vindicator to move up.

The vindicator shoots at the paladins again, and again only kills 1. The newly disembarked hunters shoot at the strike squad and gun down 2, they hold. Firing the bolters on his bike, the wolf lord kills a single interceptor.

Assault and the priest charges into the interceptors first, taking the over watch but does nothing. He makes it into combat, and the wolf lord joins in. In the combat a challenge is issued and the lord accepts it. Striking first the wolf lord attacks with his 6 attacks, and 4 of them miss, that’s ok, the 2 hits then roll snake eyes to wound. The justicare attacks back with his strength 10 daemon hammer, 2 attacks hit, 2 wound, and he fails both invulnerable saves, dying. The wolf priest fails to do any damage and gets cut down by the high number of ap 3 attacks. The dreadnaught gets wrecked by the power fist, and the grey hunters consolidate onto the objective. 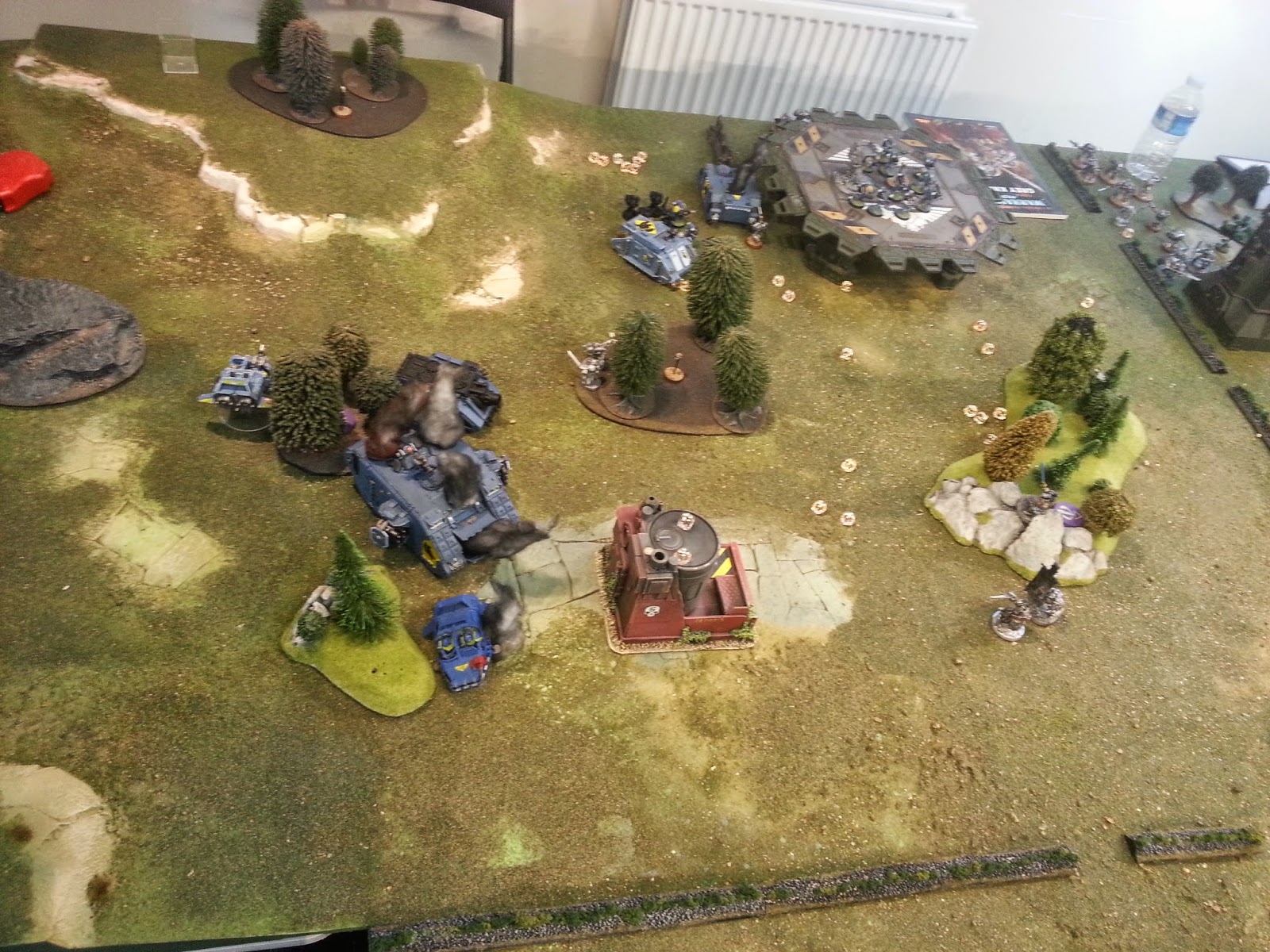 We roll to see if the game continues... It ends.

That was a very close game, and my wolf lord was a failure. How a fighter can get to such a high rank in the space wolves chapter and not be able to kill a single grey knight... not cool. Playing with the new codex didn’t feel any different from the previous codex, but such is life. A few things that i noticed from the game:
·         Wolf stone: Its too expensive for what it did (or rather didn’t) do. While i know they didn’t hit combat, but having furious charge for 40 points is far too much. If i dropped it i could upgrade the blood claws to grey hunters with close combat weapon which could potentially do more damage.
·         Bikes: I know they have rage, but the space wolf bikers don’t really do much, especially against 2+ save terminators. While this game isn’t a great show for them, i think i can spent the points better else where.

I did enjoy this game a lot, even though my wolf lord let me down at the very end. It was a great game over all, maybe we will re-play it soon with the release of the new grey knight codex coming up.