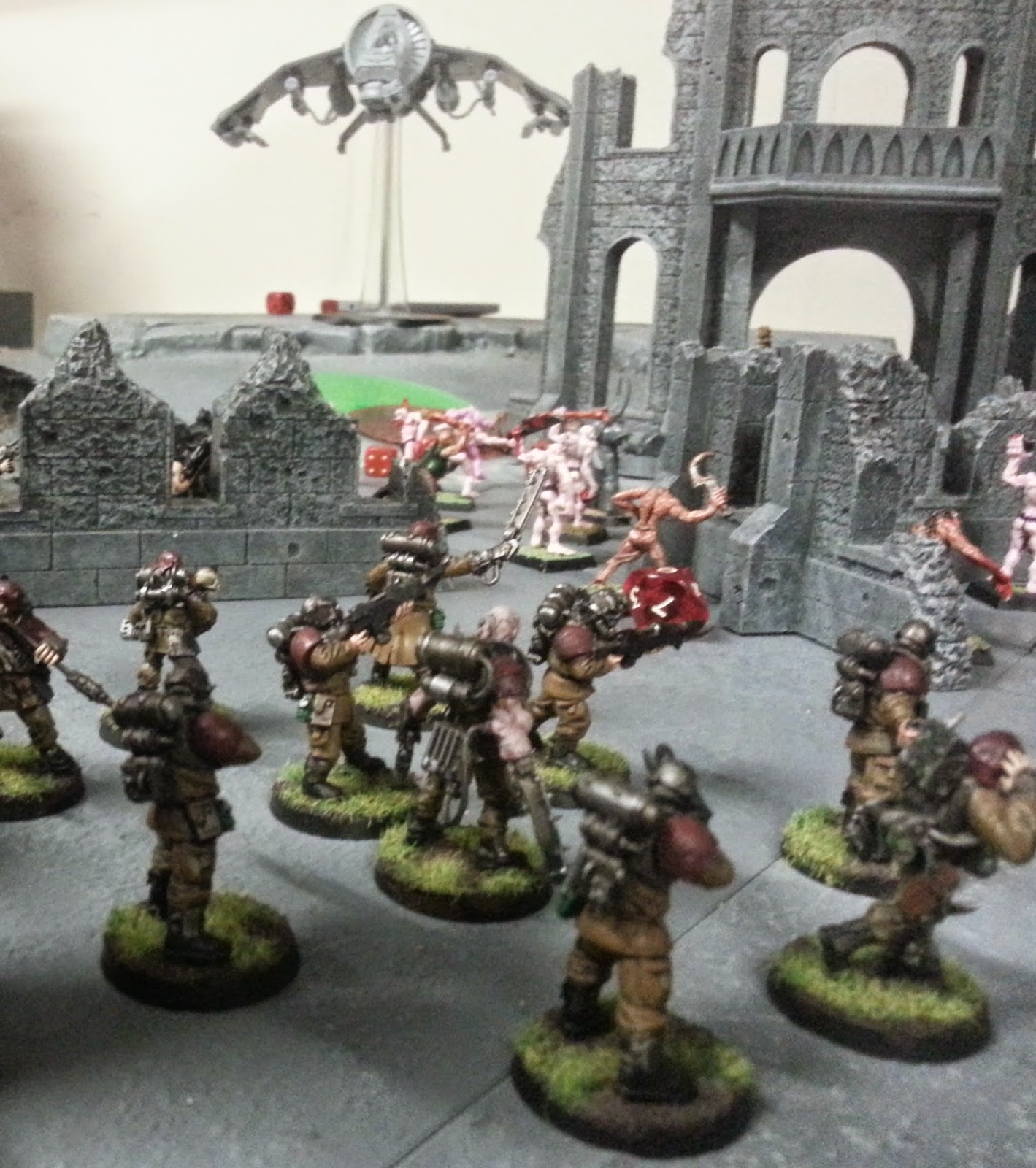 This is my first game using the Forgeworld Renegades and Heretics list and its against another forgeworld list, this one from the relatively recent release Imperial armour 4, second edition, the Elysian D-99 Veterans list. This game represents the Imperium trying to get a foot hold on the chaos held world in our campaign. Its a 1000 point game of Purge the Alien.
The Armies

For fun I wanted to test out a horde force as it is so easy to make a mass of bodies using this list. I did let my opponent know before hand, as pulling up with so many models is a bit harsh.

Our mission for the game is Purge the alien, we just have to kill the enemy, nice and easy. Unfortunately we played on a 4 x 4 table so didn't bother rolling for deployment, and just used the dawn of war method.

Rolling for deployment and the Elysians win, selecting the deployment zone with the largest ruin in. We then roll for who sets up first, and I win the roll but elect for the Elysians to set up first.

The veterans don't have much to set up, as the Valkyrie (filled with both units of veterans? Seems a bit odd now, but apparently they can do it apparently), the drop sentinels, the executioners and the Vulture start in reserve. That left the command squad who set up on the highest level of the ruin for protection, and the Tauros hiding behind cover. 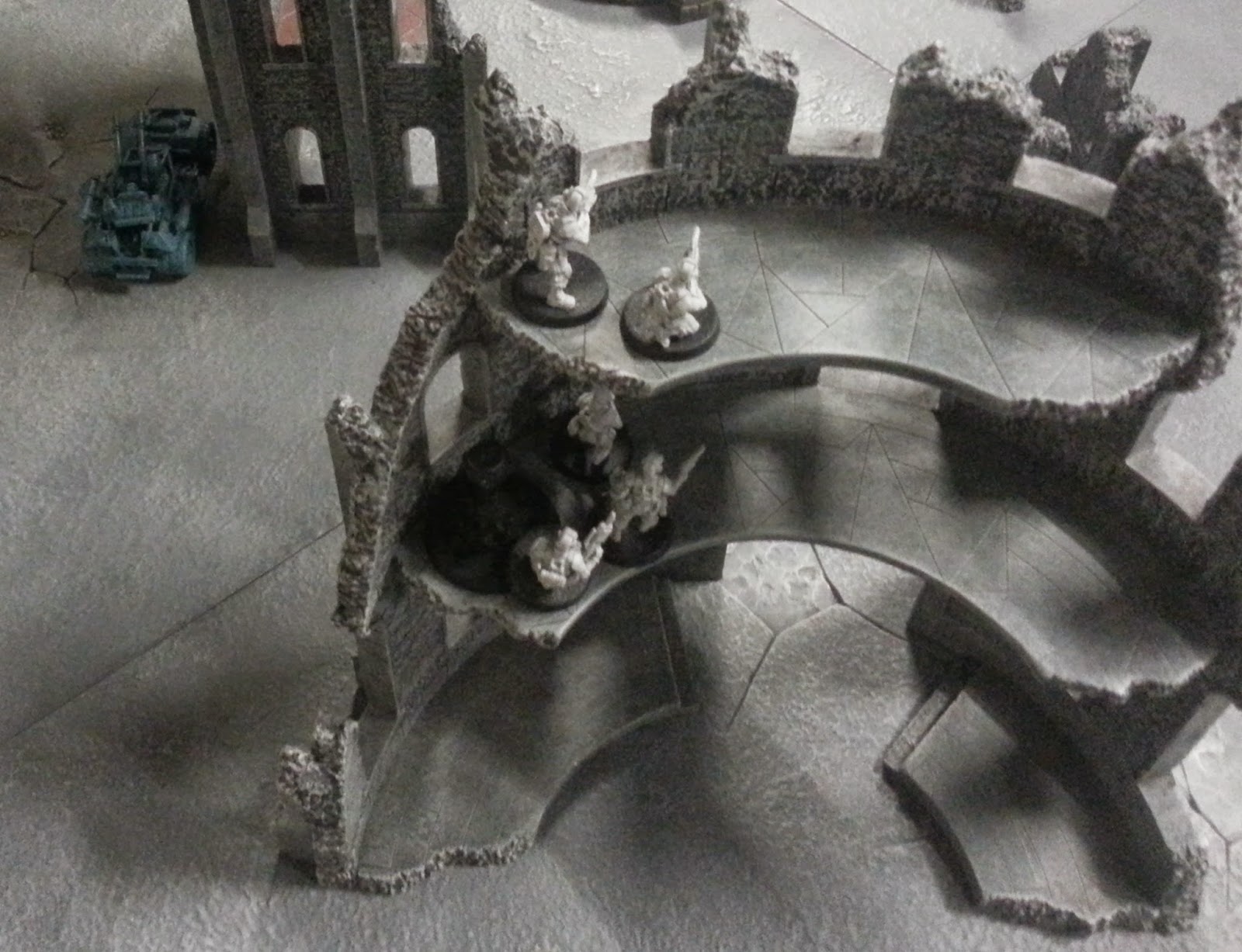 My deployment I had little option as I flooded the table. On each flank I place a unit of spawn, and across the front of the deployment the mutants take point (so they die). Behind them the command squad leads from the middle. Of the infantry squad, the command and auto cannon squad go on the left, while the melta guns start on the right. I keep the heavy weapons teams in reserve so they are safe for a turn and can have some space to come onto the table. 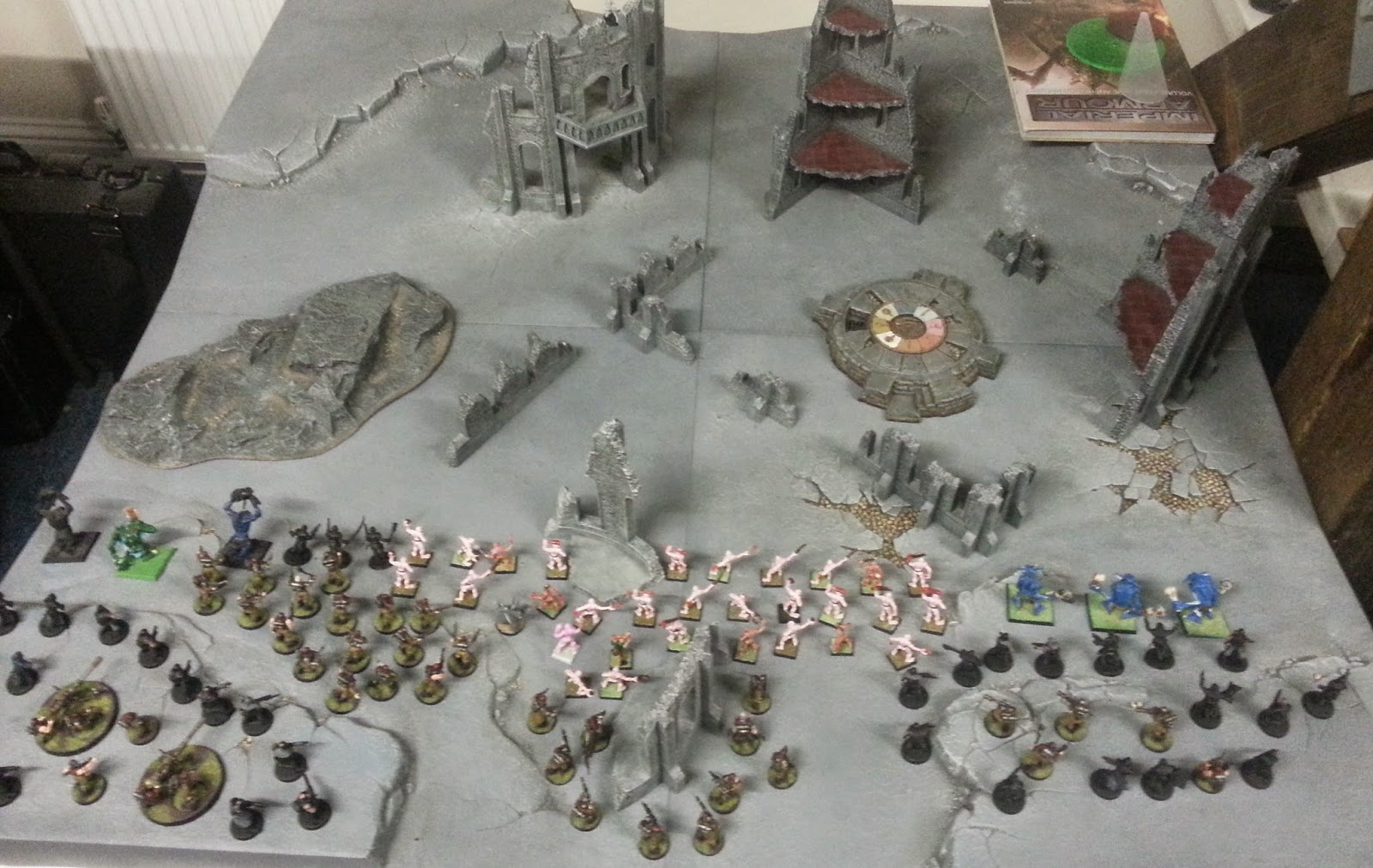 As the Elysians have the drop assault rules, half of their units come in from reserve with the rule come in turn 1. He only has 2, the Valkyrie and sentinels, so drops the flier into the middle of the table and it locks on. The Tauros moves up a little to see the spawn on the right.

Not much shooting, the Tauros shoots at the spawn and deals a single wound to one of them, and the Valkyrie shoots at them as well but fails to do anything. Out of range the command squad hold tight.

Move up! The horde of bodies push forwards with the spawn units rushing up the flanks eager to rip apart the imperial forces. With the flier now a target, the autocannon teams hold position and aim.

Opening fire at the Valkyrie, the autocannons bark at the flier. It doesn't jink and gets shaken from the hits. The plasma guns fire at it as well, but fail to hit such an elusive target. Both units of spawn run as do the melta gun squad and the mutants. 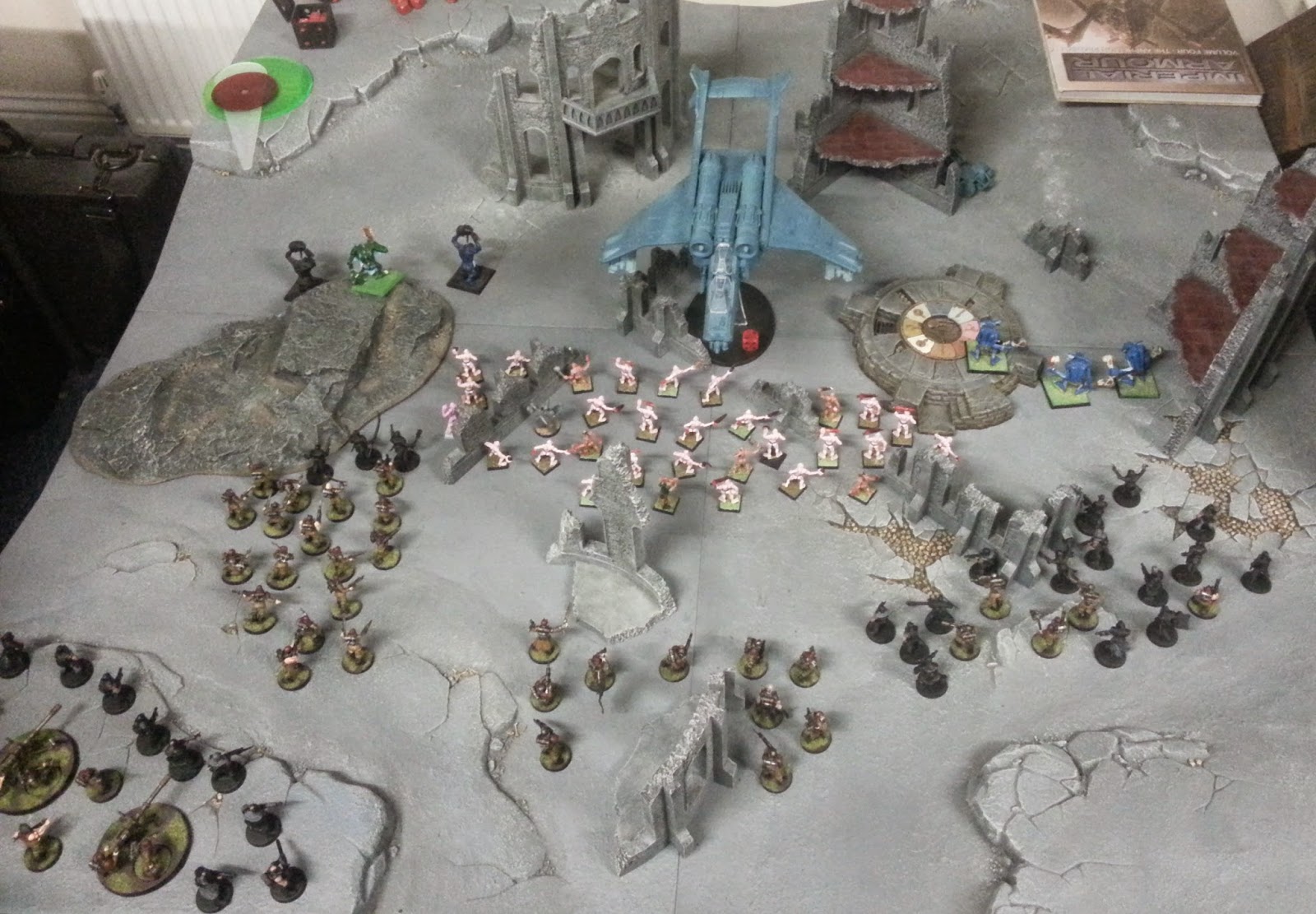 Its engines roaring, the Vulture comes in form reserve and goes after the autocannon teams. Entering in the fashion they are famed for, the exterminators deep strike in on the left, next to the spawn and hit their mark, not scattering. The Valkyrie flies off the table as it has no landing zone to drop off its cargo.

Using the scatter, the command squad attempt to give the executioners twin-linked but its unsuccessful They shoot any way at the left spawn and kill a healthy spawn. Adding its fire power the Taurus shoots at the spawn and deals an extra wound. Las fire from the command squad kills off the wounded spawn. Strafing the ground, the vulture targets the autocannon squad and kills 11 renegades with its punisher cannons and an extra 2 with heavy bolter fire. They roll to see what their leadership value is, 6... the command squad rolls and gets 10, and the infantry can use their leadership and pass their moral test.

The mutants and left spawn move straight for the executioners in their face. Every one else pushes forwards. 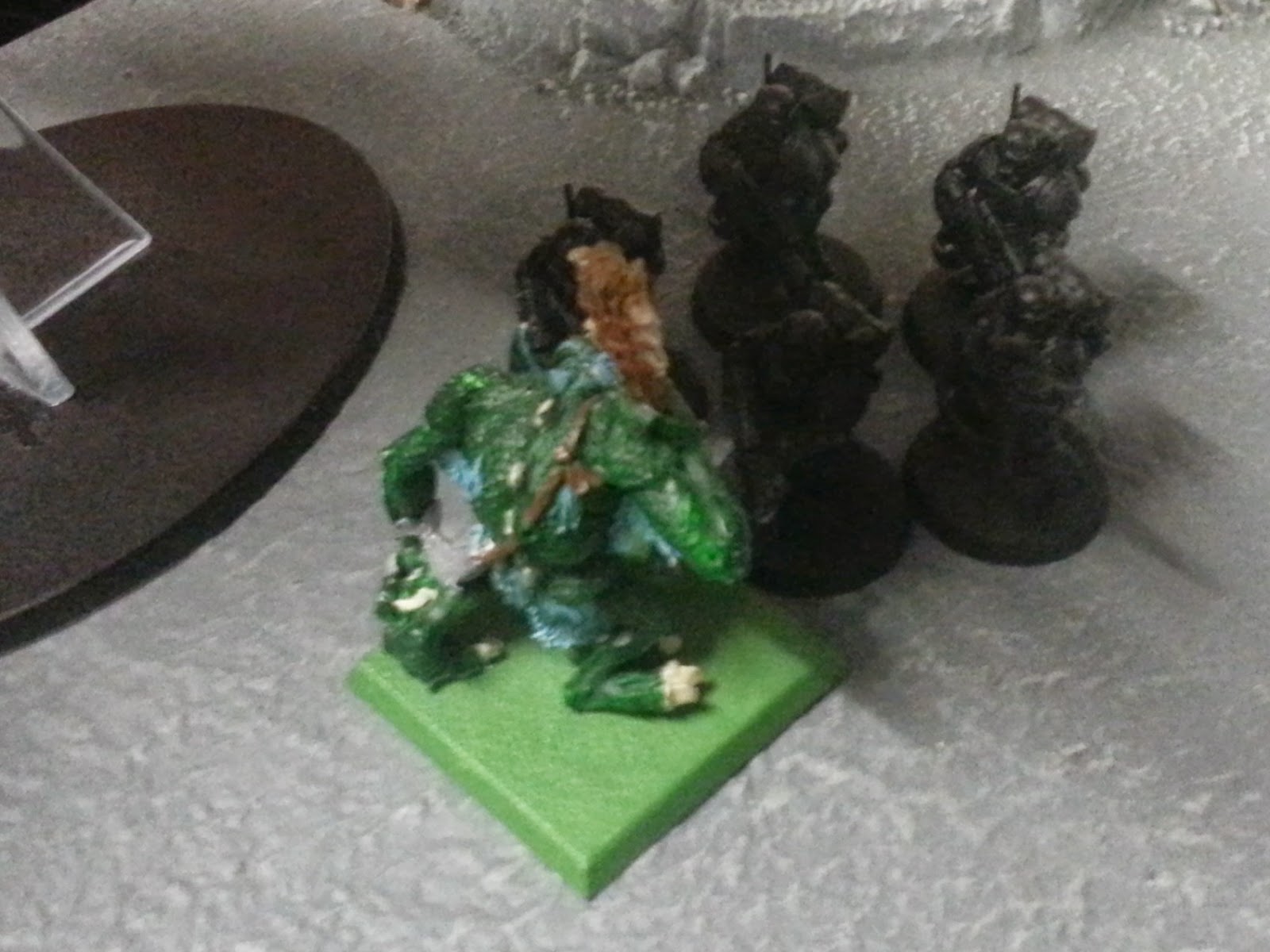 Only 1 autocannon left, but it shoots at the vulture, it jinks out the way and avoids any damage. The plasma guns shoot at the vulture as well, none of them hit and a single one over heats killing its user. The right hand spawn run.

Assault phase and the spawn on the left charges into the executioners and the mutants fail to make the charge. The spawn rolls 6 for its attacks, getting 8 attacks, it hits with most and deals 5 wound, all of which are saved. He takes no damage In return. 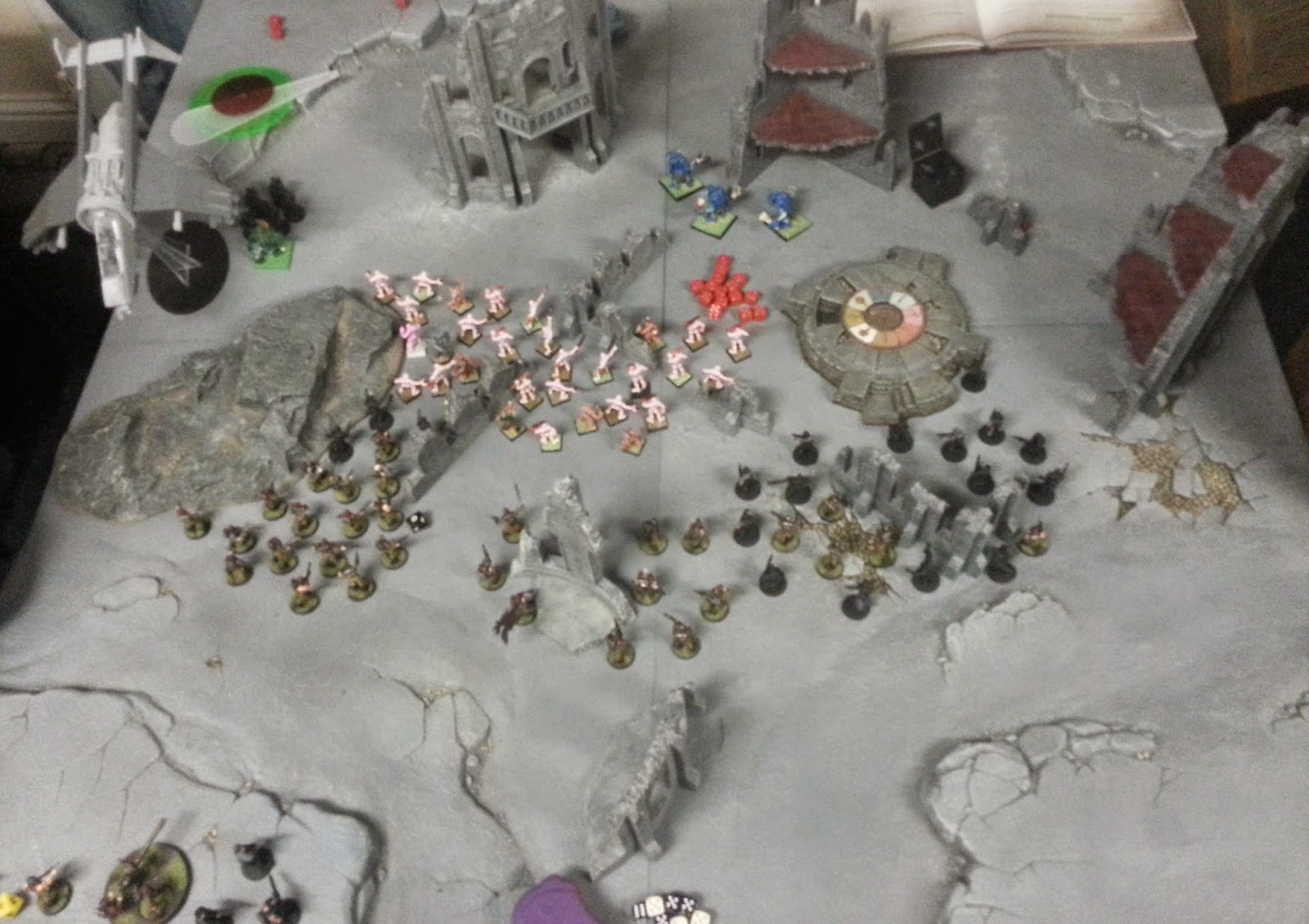 Coming in again, the Valkyrie comes in on the left. The vulture moves back and towards the spawn. The Tauros moves back away from the spawn.

Las fire again from the command squad deals damage to the right trolls, as well does the Tauros. Again the punisher cannons of the vulture smashes into the mutants and kills 8 with ease (its snap shooting from jink). Finishing off the phase the Valkyrie kills off the last autocannon as its the closest model to it.

Assault phase and the spawn kills off two of the executioners but one of them deals a wound back. 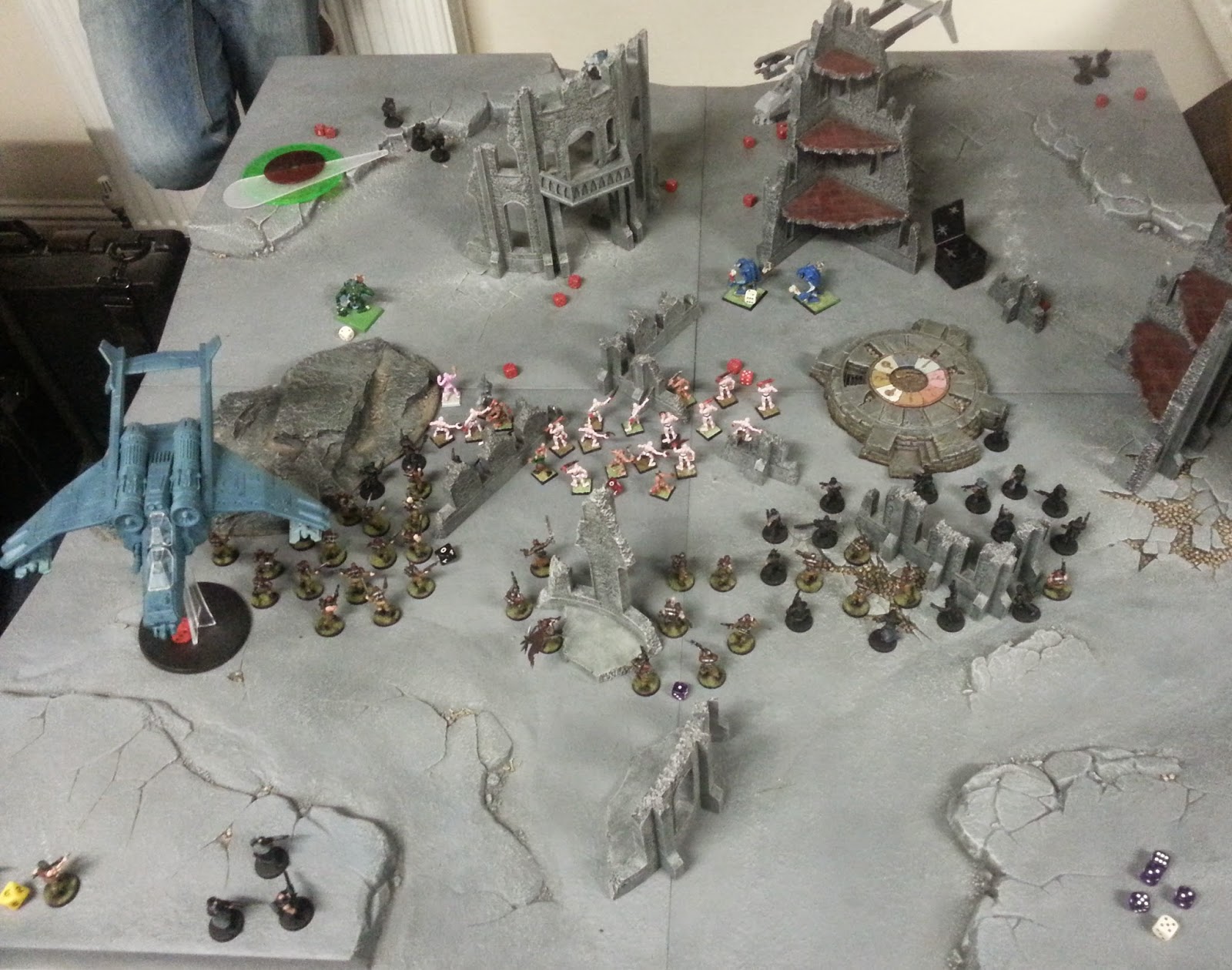 Finally appearing from reserve, the lascannons appear at the back, ready to target the Valkyrie The spawn move straight towards the Tauros.

Firing at the Valkyrie with their lascannons, the flier attempts to evade out the way, but a single shot connects, and detonates the ammo store, exploding the vehicle. The passengers crash to the floor with only 2 surviving by some miracle. Seeing the passengers plummet to the ground, the infantry on the left take aim and kill off the survivors with a huge volume of fire.

Charging into the Tauros, the spawn tear at it and rip it to bits, wrecking the light vehicle. The mutants are forced to attempt a charge but roll double 1 and still fail. The other spawn kill off the veterans. 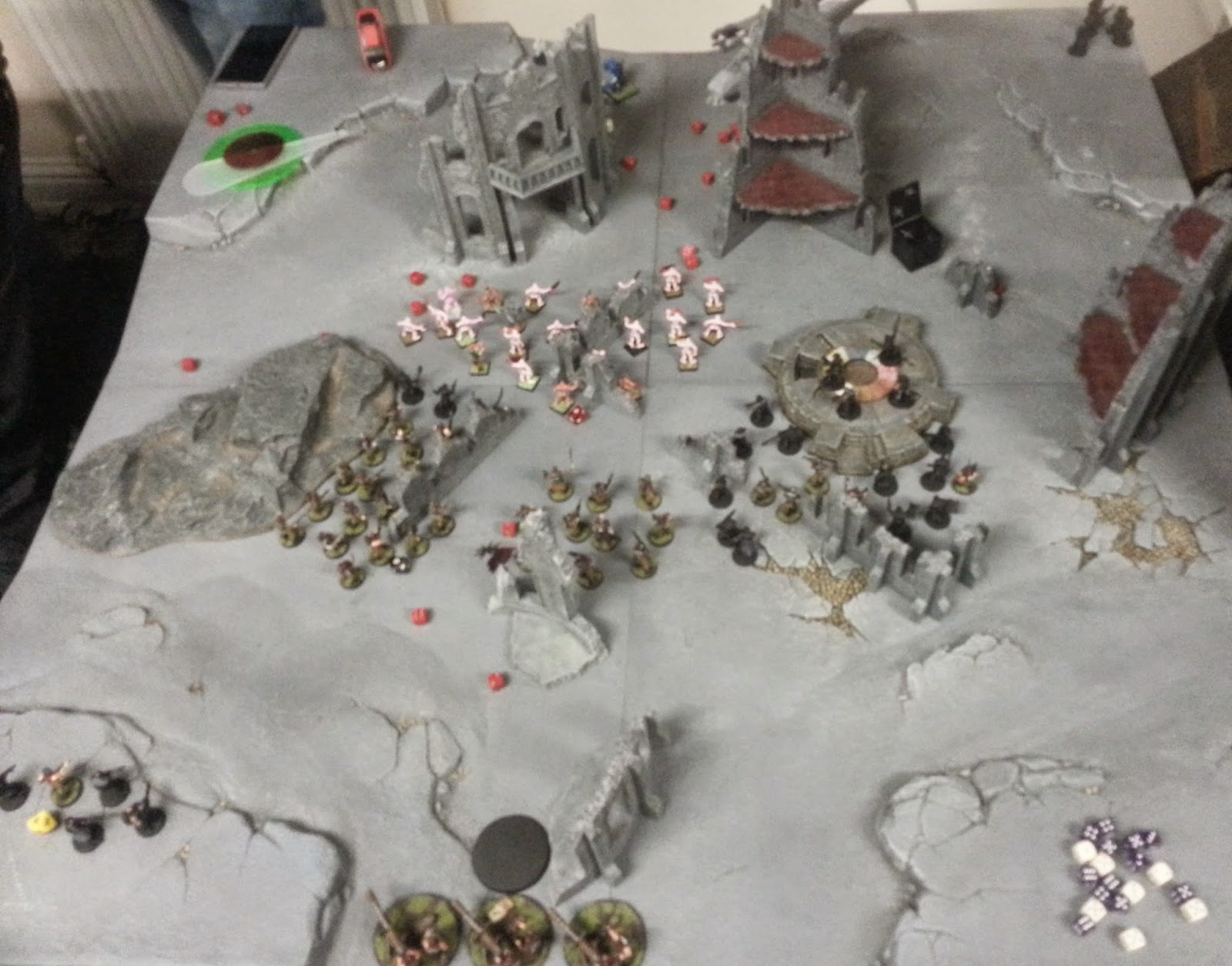 Finally arriving from reserve the drop sentinels deep strike in, but they mishap by scattering 12 inches and ending up off the table. Rolling for mishap, they are placed back into reserve ready to come back next turn. With so many targets the vulture moves to the left and faces the command squad, ready to rain punishment down on the leader of the chaos horde.

Unloading everything it has, the vulture fires at the command squad, 8 disciples get gunned down by the punisher cannons and a further 1 gets killed off by its heavy bolter, leaving the arch-demagogue alive. Seeing the heretic alone, the Elysian command squad fire with their lasguns, but they fail to do any damage. 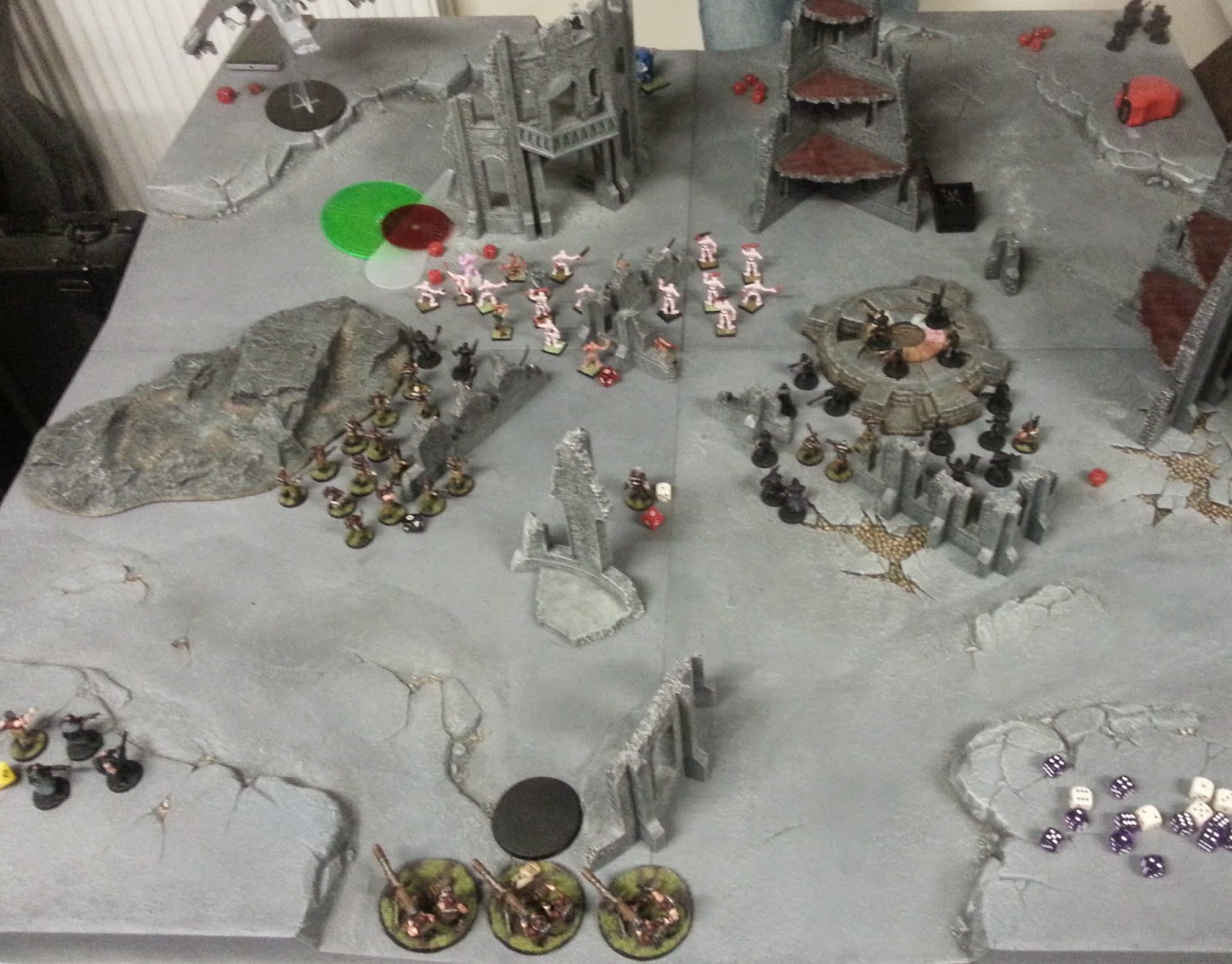 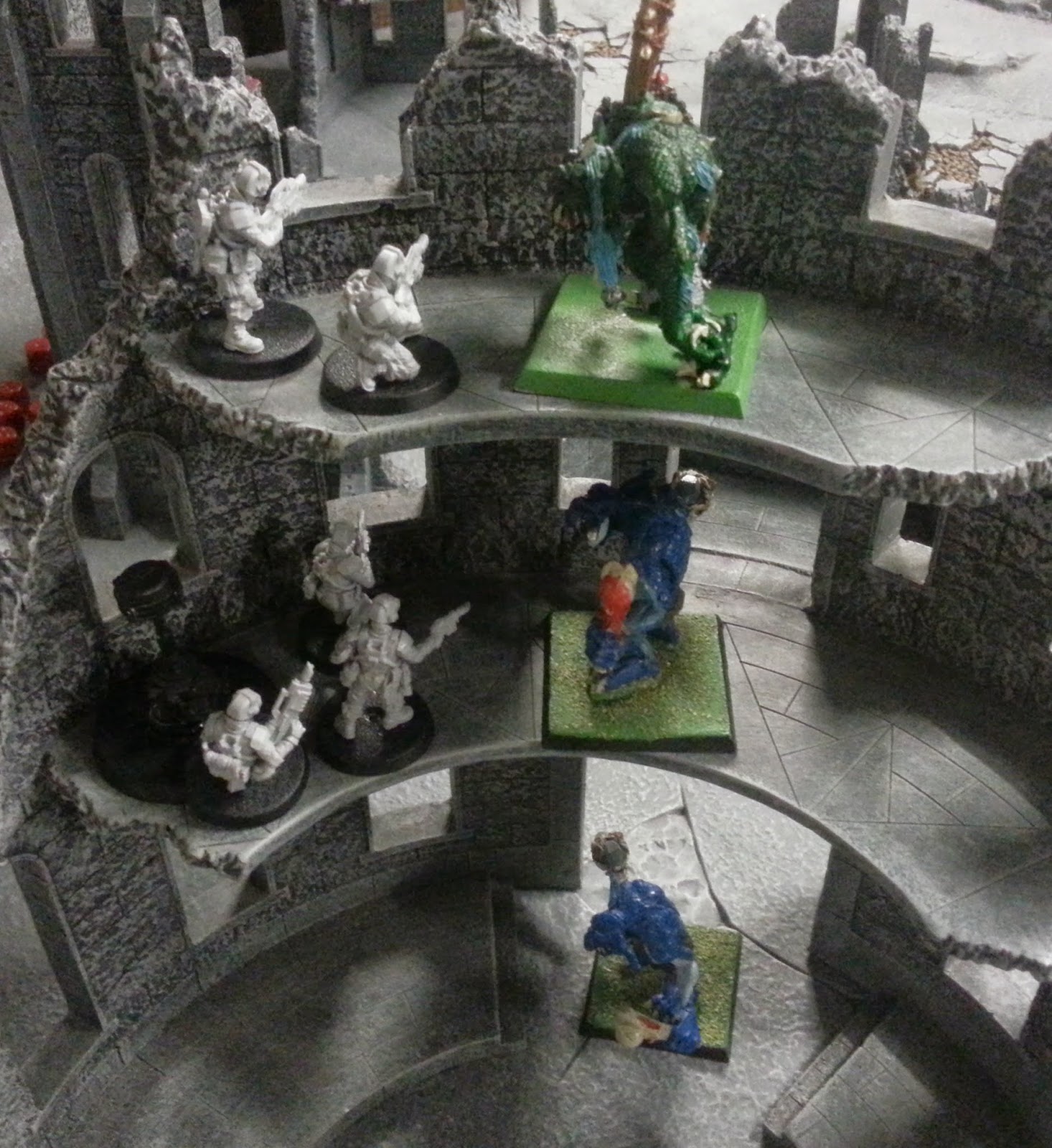 Both units of spawn start climbing the ruins of the Elysian command squad, like grotesque tiny king kongs. The lascannon teams move to get a better shot on the vulture and the Arch-Demagogue joins a squad of nearby infantry to survive another punishing turn of fire.

Plasma guns and lascannons target the vulture but fail to do anything, but he does jink, forcing snap shots next turn.

Assault and both units of spawn charge into the commander, the imperial troops attack first and manage to deal 3 wounds killing off a spawn, but the other 2 attacks back and kill 3 of the veterans, leaving only the medic and commander left. 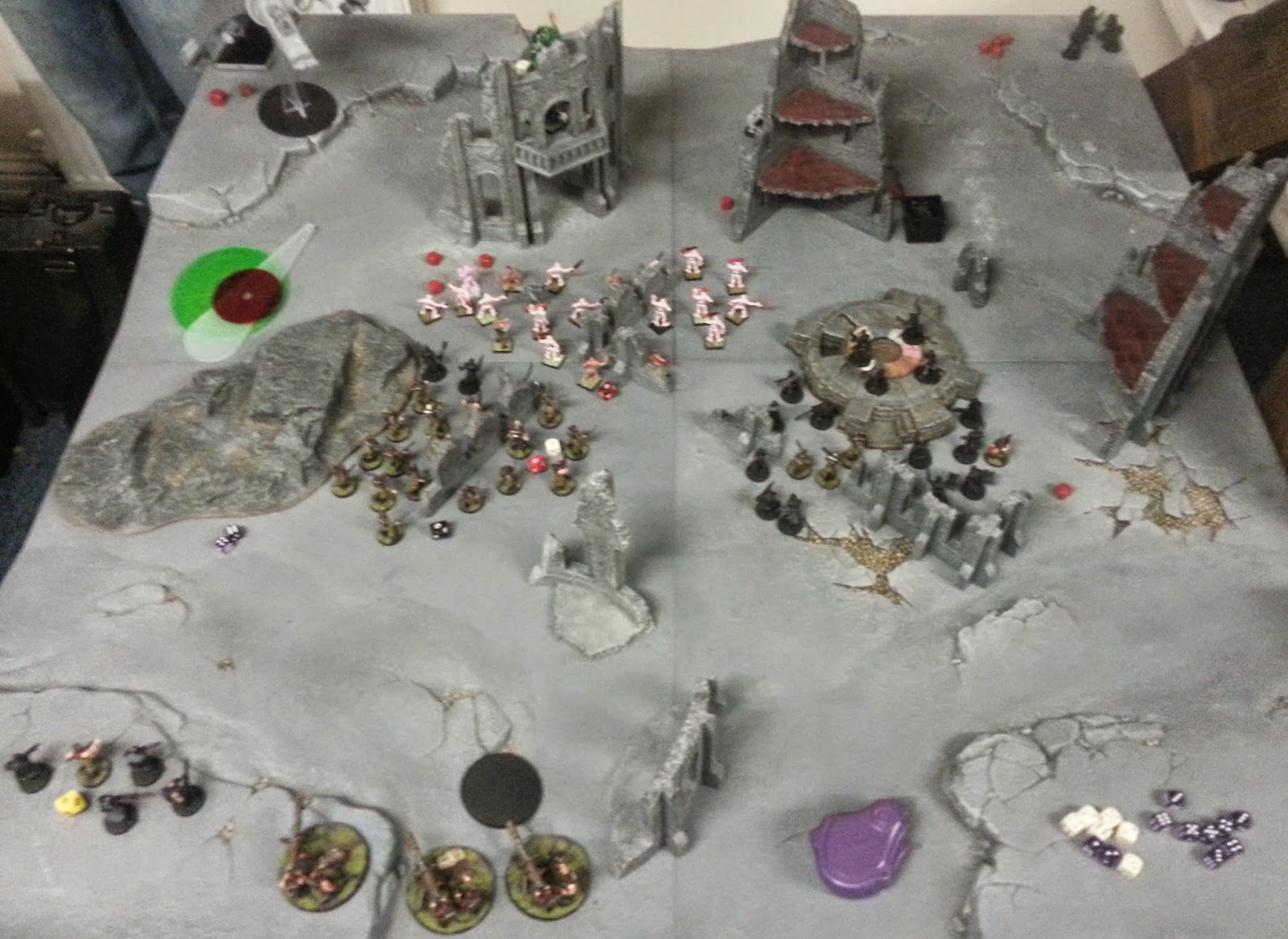 Not allowing the Arch-demagogue to escape, the vulture circles round to target his new squad. The drop sentinels appear from reserve and this time lock on where they need to be, next to the lascannon teams.

Firing both multi-meltas, the sentinels kill a single base of heavy weapons, they take a moral test (they get LD 5) and fail it, running off the table. Going for another strafing run, the vulture kills off 7 of the infantry but they hold, thanks to the leadership of my warlord. 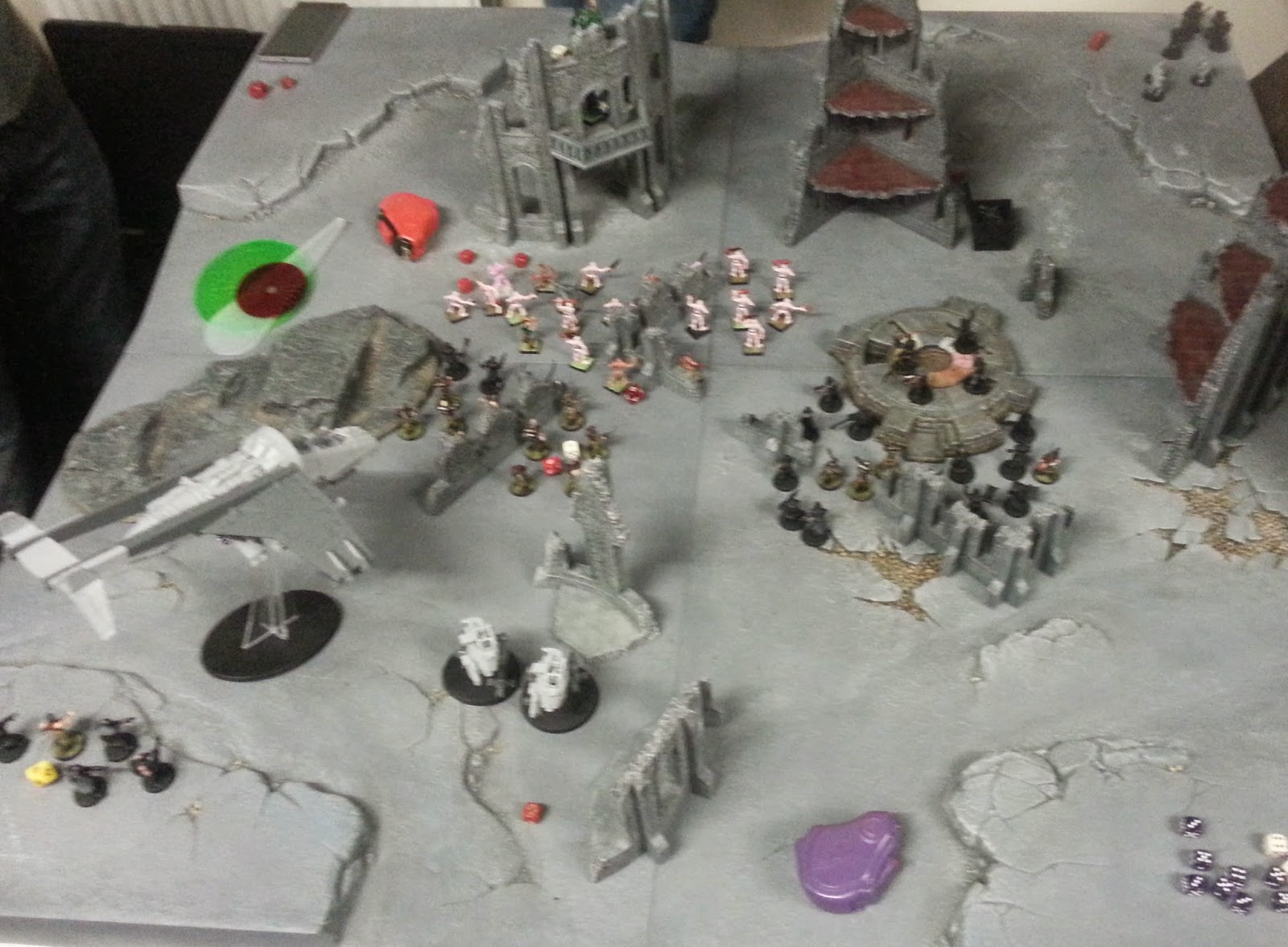 every one turns on the sentinels, getting as many special weapons in range as possible.

They all fire, but the melta guns miss, the plasma guns fail to wound and the krack grenade does nothing.

In a desperate attempt to finish them, the infantry squad lead by my warlord charges the sentinels, and do nothing, but take no damage in return. On the other side of the table the spawn rip apart the medic and wound the Elysian commander, the commander attempts to flee but doesn't escape. 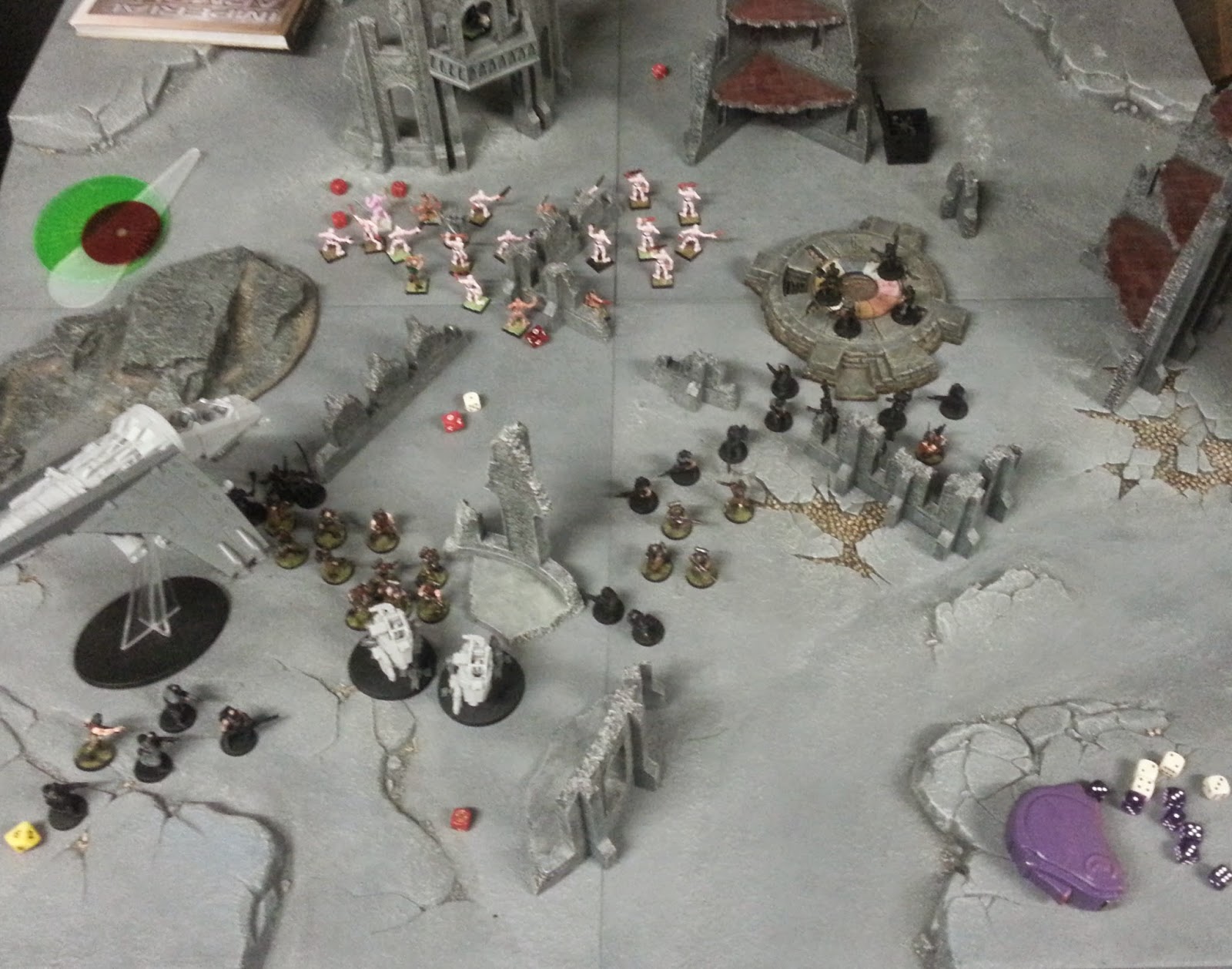 We roll to see if the game carries on, but doesn't.

Victory to the Renegades and Heretics.

As my first game with the Renegades and heretics list, I have to say it was quite fun, but I don't think it was totally fair on my opponent. We really should have played on a larger table, 6 x 4 probably, as he needed more room to use his fliers and deep strikers properly. If that was the case, he probably would have done a lot more damage to me. Regardless using a horde force was fun, but I double I will do it again, as I had to borrow ALOT of models which I don't want to replace with forgeworld guys. I still have my tanks and fliers I can add to the force, so that can build up the points.

I will definitely use the force a lot more after I have painted more, but I will have to use undead models to represent my mutants for now, the old ghouls will do. So what did I learn from this game?

This game was the first encounter between the Imperial guard and the renegades in our campaign, and it went well. But it will mean that a larger push will be coming soon.

That's all for now, I am really exited to be using this forgeworld list, so hopefully I will have a lot more for you soon. Hope you enjoyed.