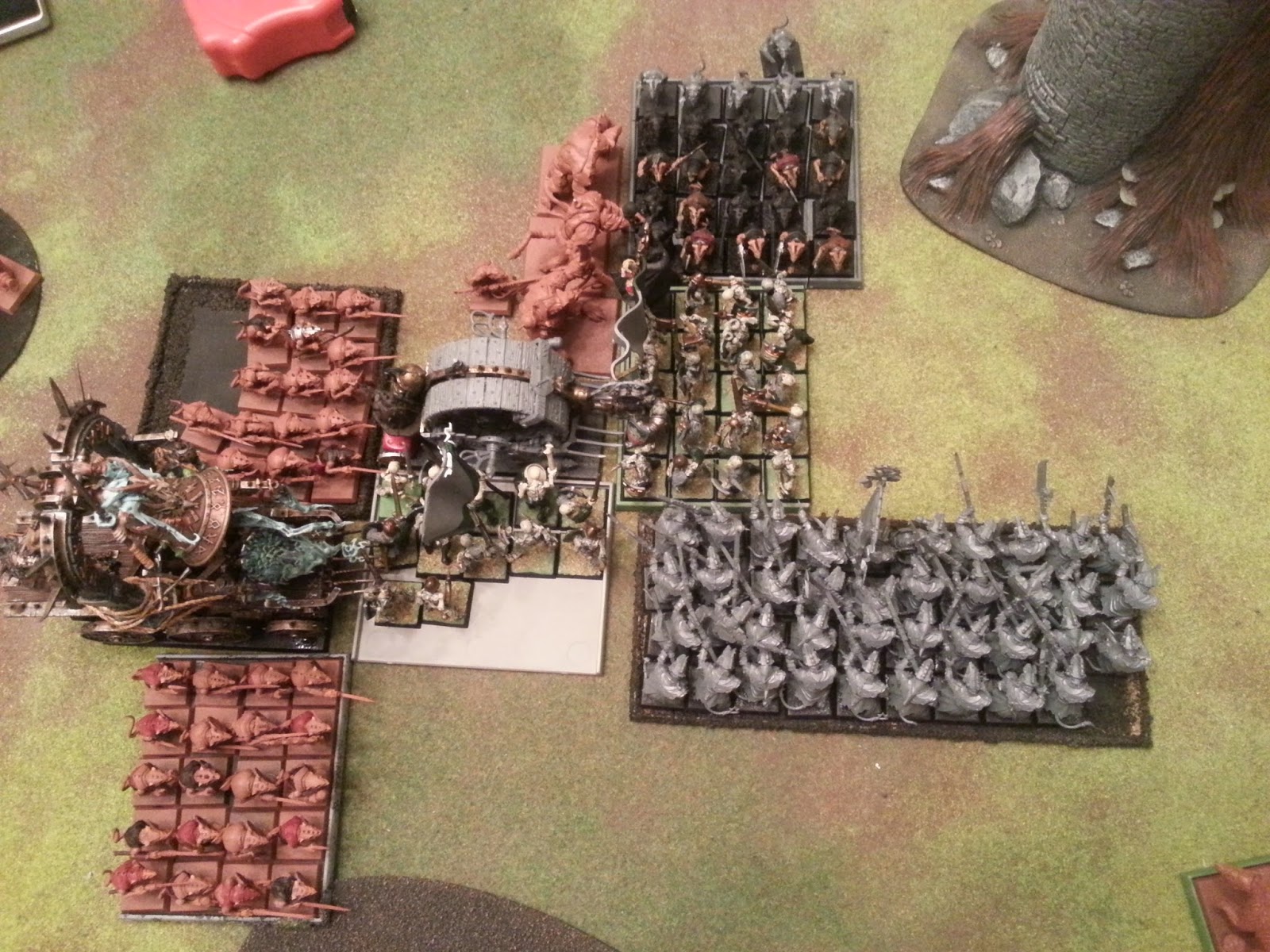 Another dive back into fantasy, but I really wanted to try out my undead horde so I broke out the vampire counts. My friend has been having some success with his skaven force so I tested out my list against him. The game was battle for the pass, with 2000 points. 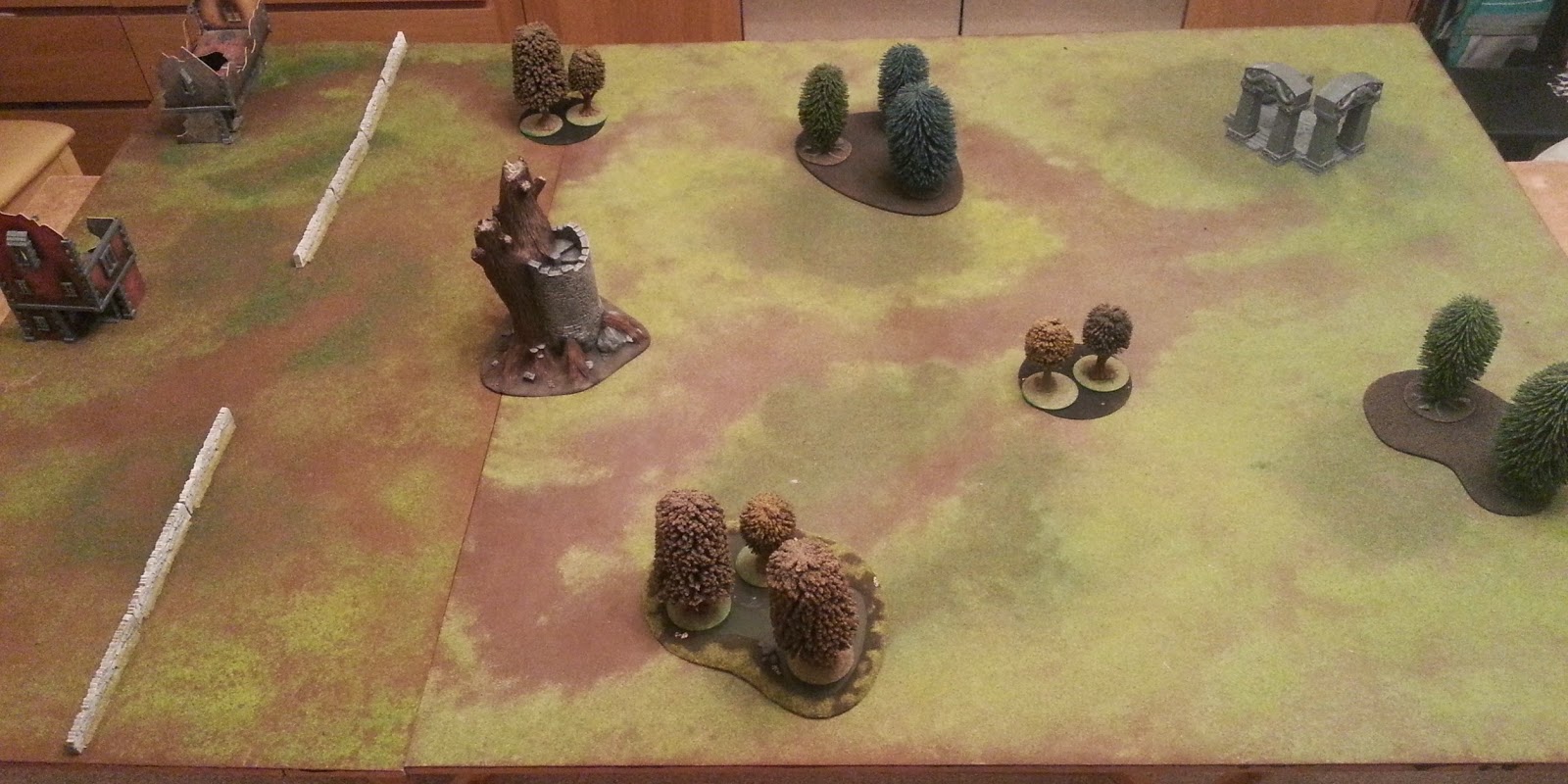 Deployment for my vampires ends up with both units of dire wolves on the flanks, then zombies closer to the middle. On the right the grave guard back up the zombies. In the centre of the table are are skeletons and to their left the other unit of skeletons. I place the master necromancer in the centre unit of skeletons, a necromancer in the left unit of zombies and the other in grave guard. The banshees join the same units as the necomancers.

The skaven deployment has the rat ogres on my right, the wolf rats on the left flank. The greyseer joins a horde of clanrats in the middle of the table with the bsb and small unit of clan rats behind them. The warp lighting cannon is on the right behind the ogres. On the left behind the woods the stormvermin and warlock deploy. The slaves and doomwheel are on the right of the greyseer. 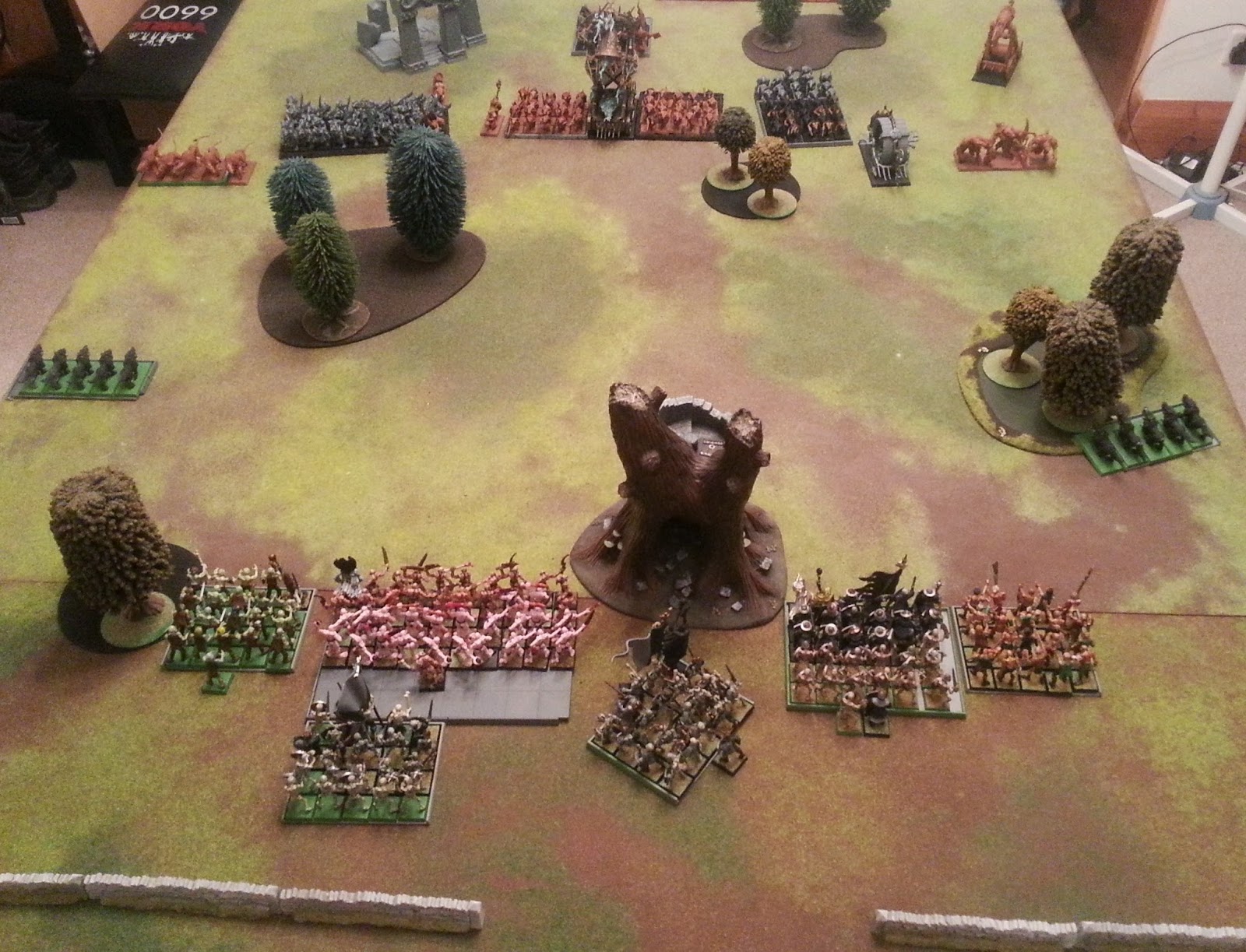 After we are deployed I end first and get +1 to the roll for first turn. Before anything else happens we both move our vanguard moves. Which is the dire wolves for the undead.

And with a 6, the vampire counts win the roll to go first.

In the movement phase the dead shamble forwards. Every one is within 12 of the general they are able to march except for the dire wolves, which on the left get in the way of the wolf rats and on the right move in front of the rat ogres.

Magic phase and its 8 power dice to 5. Delving into the winds of magic, the master necromancer manages to cast invocation and raises 10 skeletons in his own unit, and 7 in the other. Both other necromancers attempt to cast spells but they get shut down my the skaven. 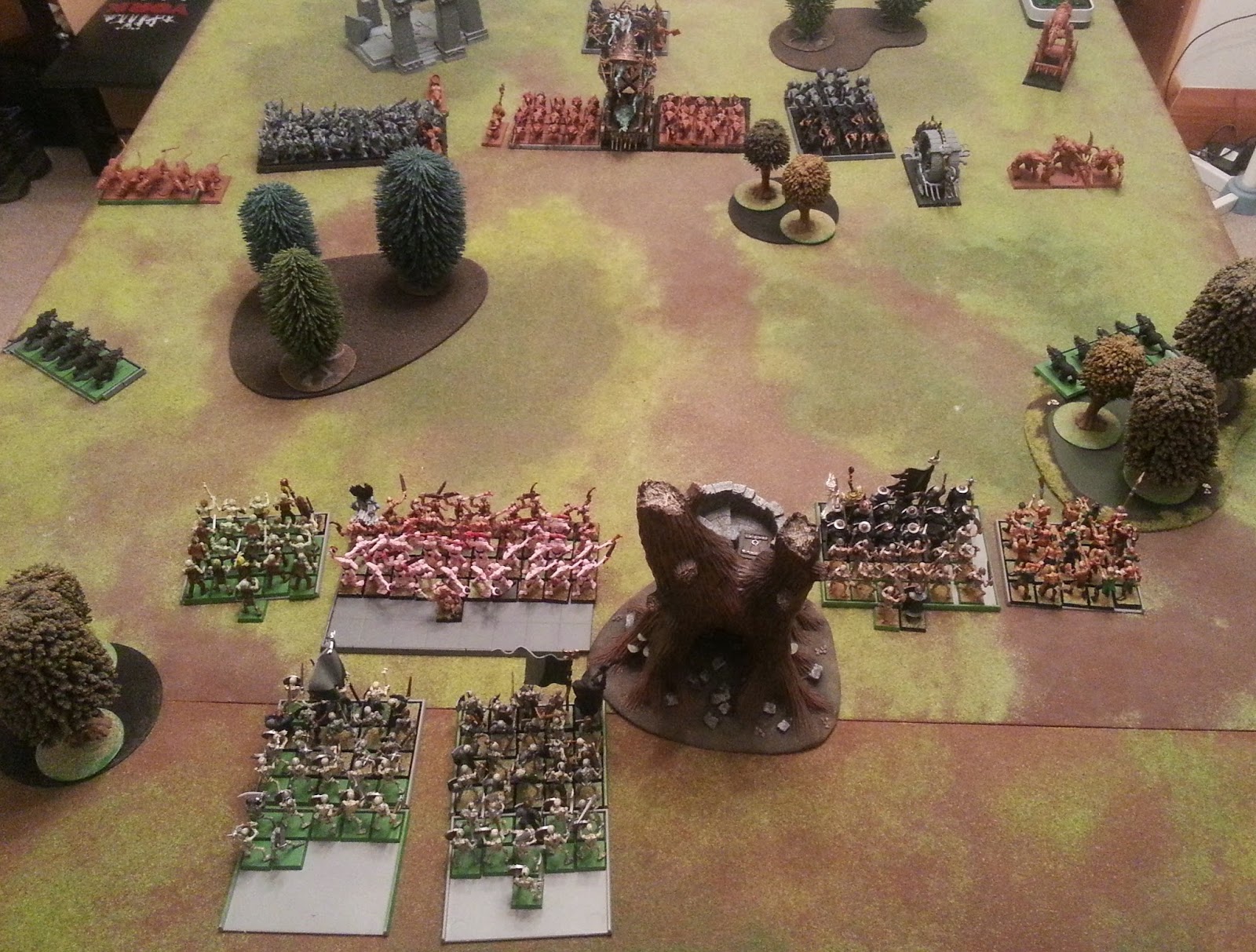 Magic and its 8 power vs 6. First the bell is rung and it emboldens all the skaven around it, acting like a bsb. The engineer casts scorch on the ghouls and I fail to stop it, killing off 9 of them. The greyseer then uses its foul magic to plague the ghouls, killing off 8 ghouls. But I stop wither on the grave guard.

Doom rocket phase... the engineer really hates the ghouls and he fires his doom rocket. He manages to get a great hit and kills off 7 of them. The poison wind mortar also targets the ghouls but it scatters off. 18 of the grave guard die to the warp lightning cannon who gets a perfect hit at strength 8. thankfully the doomwheel misfires and wounds itself.

Combat is over quickly with the rat ogres murdering the dire wolves and overrunning past the zombies on the right. On the left 2 dire wolves die to the wolf rats and the rest crumble. 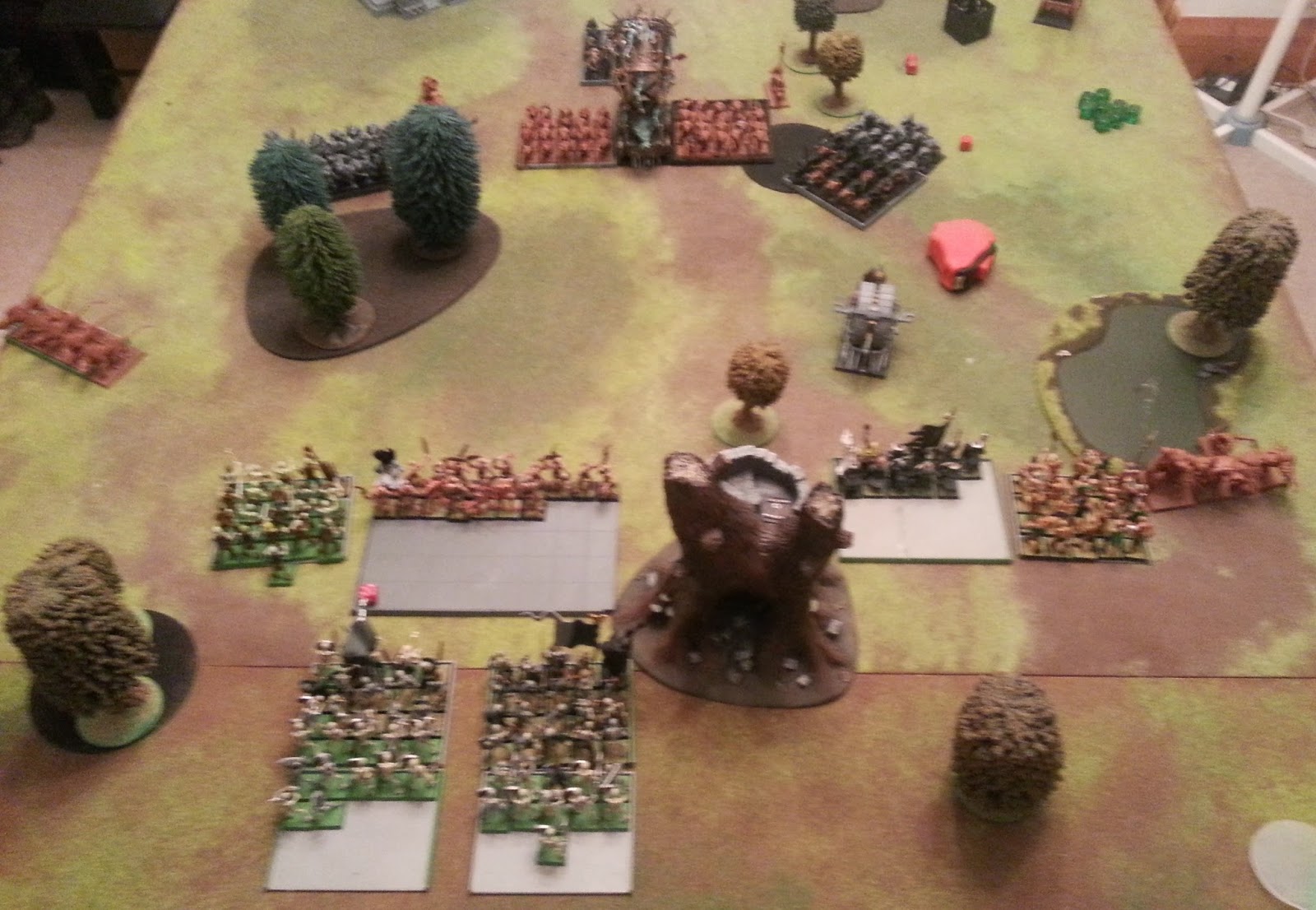 With the doomwheel right in front of them the grave guard charge into it. Every one else moves forwards with the zombies getting ready to charge the wheel next turn. 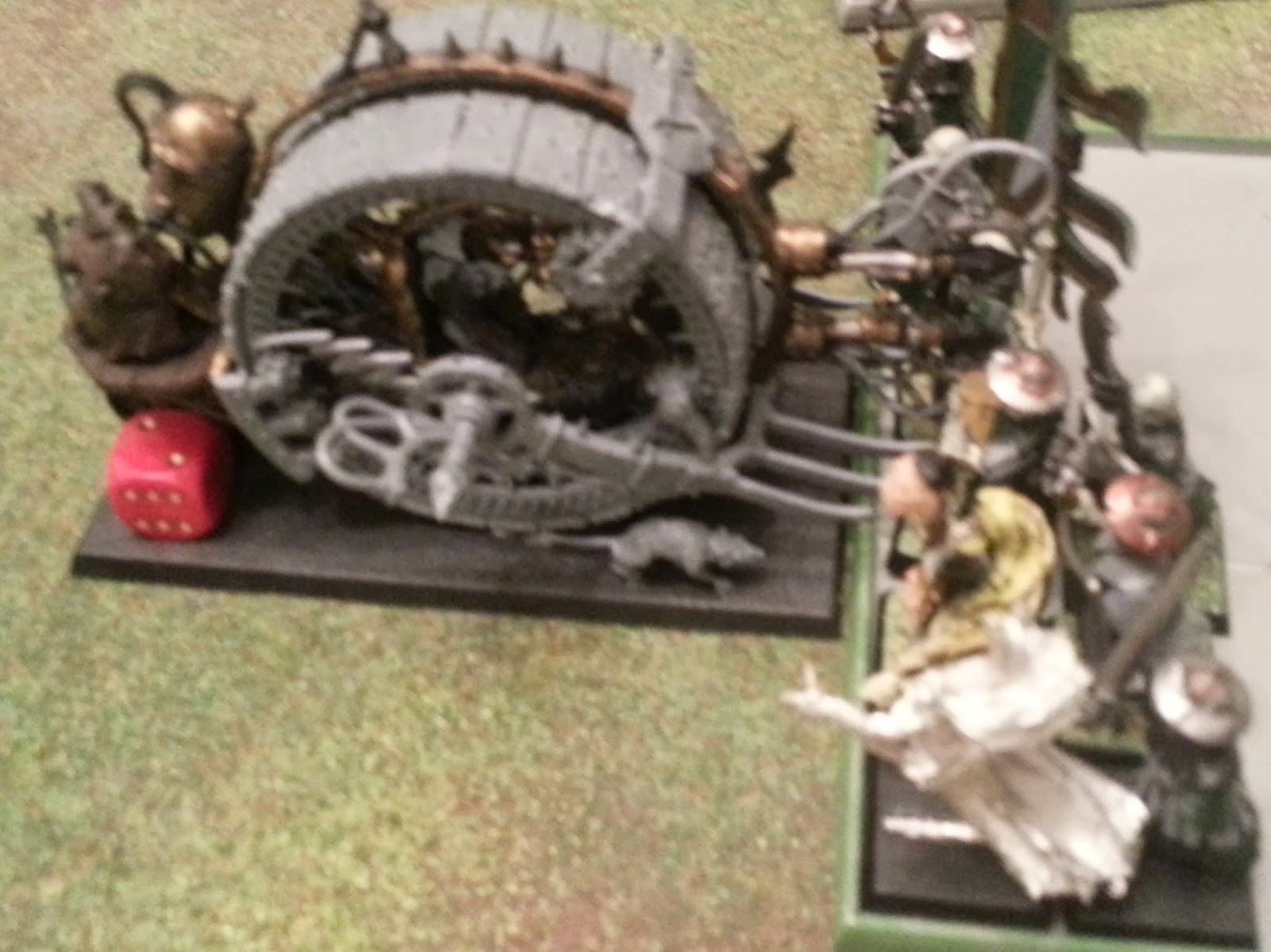 The winds blow lightly this turn as its 6 vs 4. I try to force him to use some dice by rolling 1 die for the rod of flaming death on the big unit of clan rats, but I roll a 2 and fail to cast it. So I then try to cast invocation with the master necromancer and the necromancer on the right but both get stopped by the greyseer.

My first shooting phase and I get exited, the banshee on the right screams at the doomwheel and take 2 wounds off it!

In close combat the grave guard lose 2 models but win thanks to my musician and the wheel holds its ground. 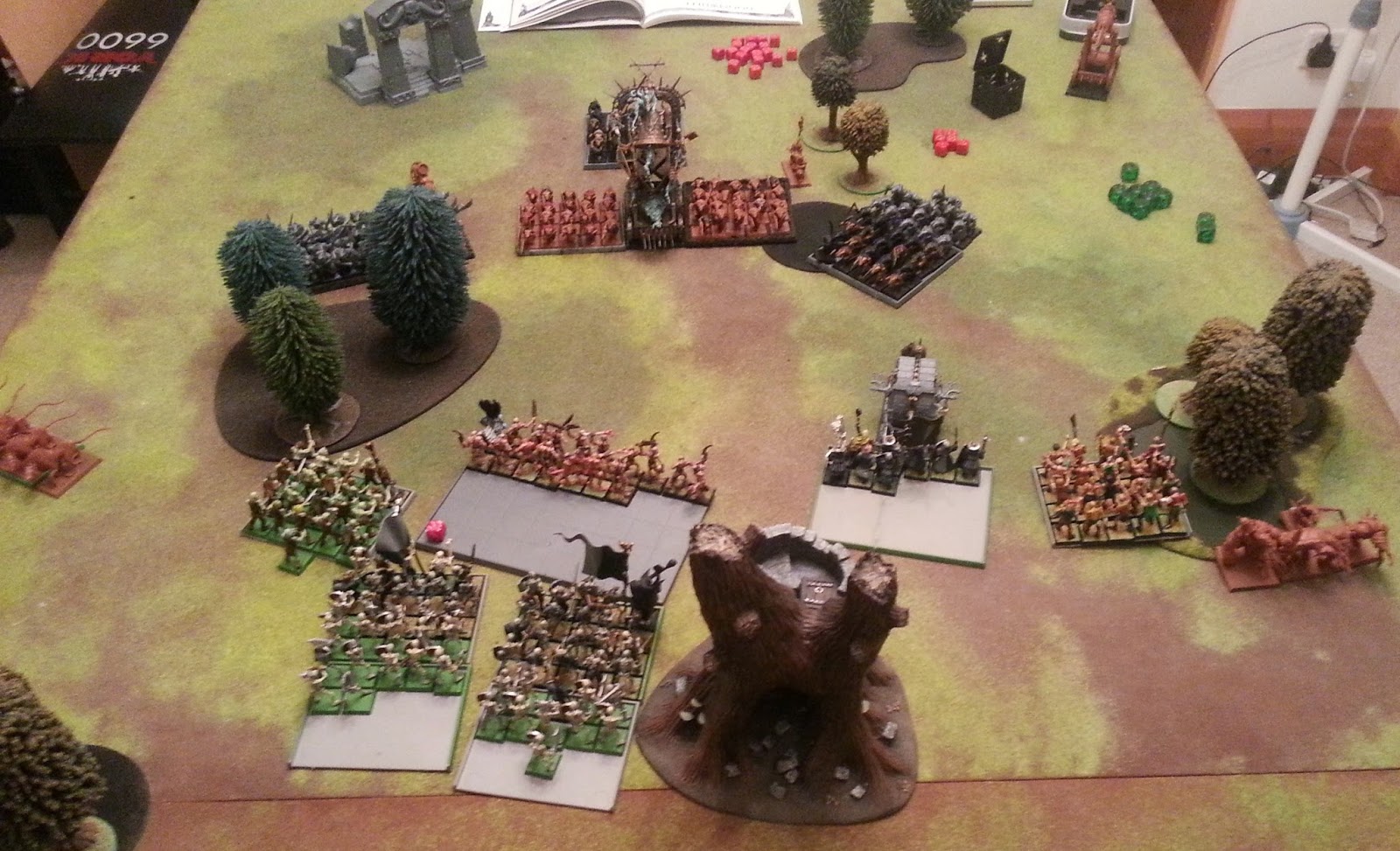 With the wheel possibly in trouble the skaven slaves are force into charging in and helping out. On the right the rat ogres reform ready to charge into the combat next turn. The wolf rats start to move to flank around to get back into the fight next turn as well. The warlock leaves the stormvermin and goes it alone. On the right the skaven move forwards a little, and the warp fire thrower moves into the woods.

Still blowing weakly, the magic phase is 5 vs 3. The bell rings out and scorches the zombies on the left but I stop it. The seer casts death frenzy on the skaven slaves which I let though but I stop warp lightning.

The cannon fires at the ghouls but it over shoots, and hits 2 ghouls and 19 skeletons. No ghouls die and 15 skeletons explode. The doomwheel kills off 2 grave guard in combat. Firing the poison mortar, they hit the zombies and kill off 5.

In combat the slaves manage to kill off 3 grave guard, and the guard fail to do any damage. Calculating combat resolution and the guard crumble to dust, allowing the slaves to overrun. 5 skaven slaves die to death frenzy. 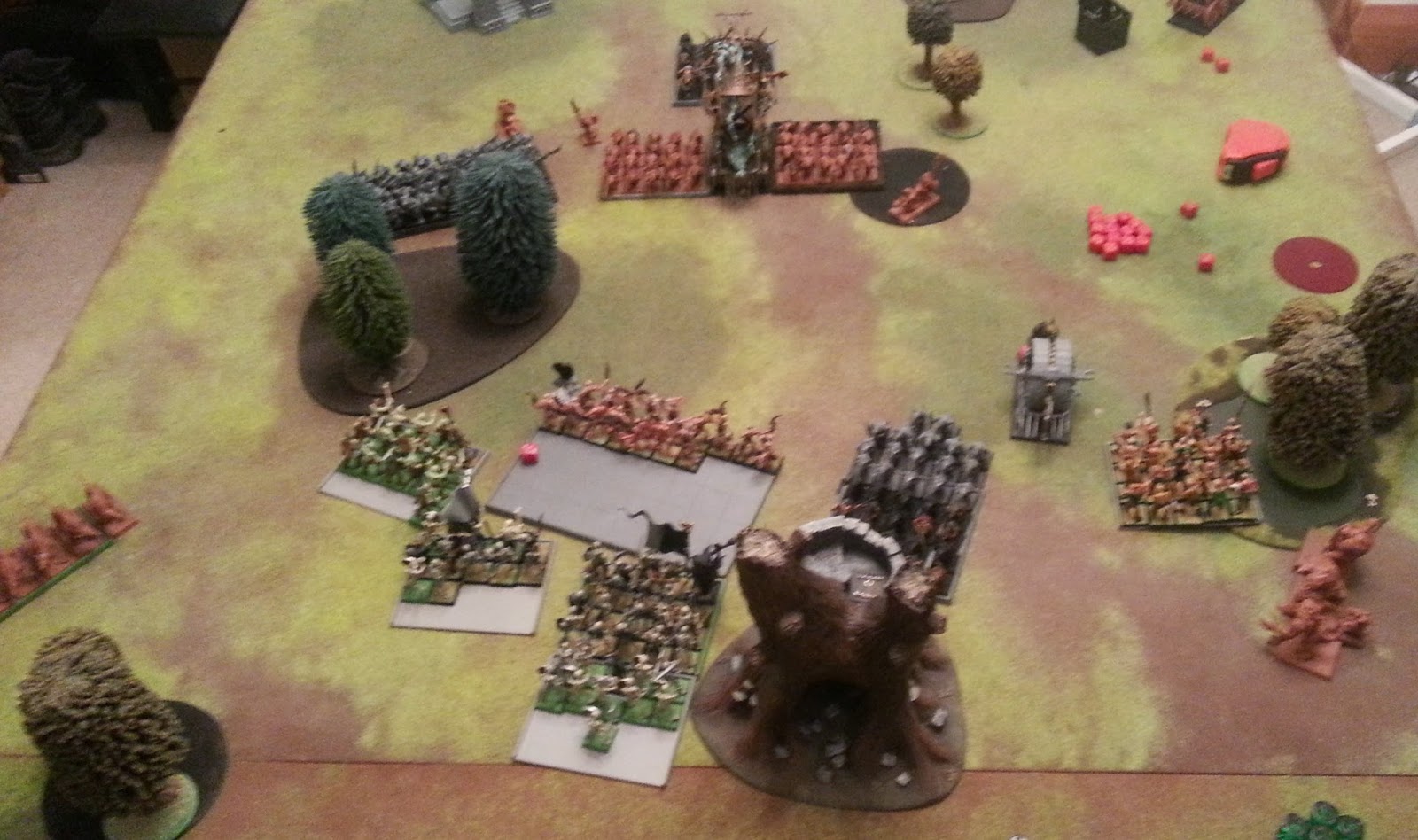 With the doomwheel now on its own, the zombies charge its flank and the ghouls charges into the clanrats with the bell. Again every one else move forwards ready to take the charges.

Finally the winds blow strong, with 11 power dice to 6 dispel. The master necromancer casts invocation on 16+ and raises a lot of new models. The ghouls gain 7 models, the skeletons get close to starting strength. I then try to cast dance macabre on the ghouls on 2d6 and get snake eyes... no more master necromancer this turn for me. The rest of the necromancers attempt to do what they can and they are all stopped.

Unfortunately this turn both of the screams fail to do anything.

In combat the fight between the zombies and the doomwheel is rather dull, as neither side deals any damage but the zombies win and the wheel runs away! Unfortunately the wheel escapes. The ghouls vs clanrats with screaming bell, as the rats are faster they go first and kill off 6 of the ghoul. They attack back but only do 3 wounds and put a single wound on the greyseer. I lose and the ghouls crumble, and at the end of it all, i only have the banshee left. 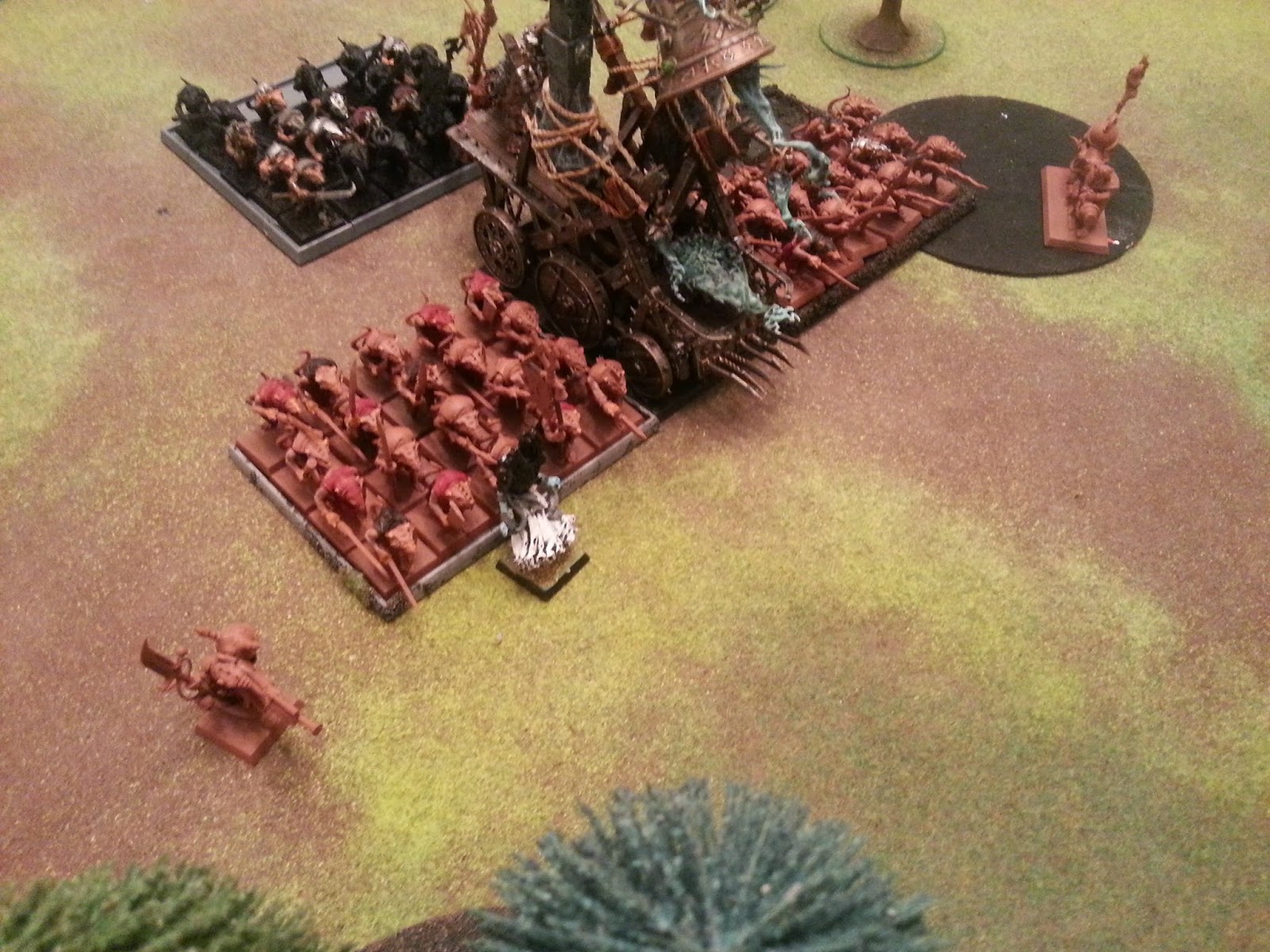 On the left of the board the stormvermin charge though the woods right into the zombies in front of them. Chasing after the wheel didn't get the zombies far enough way and they get charged in the rear by the rat ogres. The doomwheel rallies and we aren't sure if he then has to move it thanks to random movement. So we roll it off and it comes up as being able to move, so goes towards the skeletons charging them.

Magic phase and its 9 vs 6. Ringing the bell starts with emboldening all of the skaven again. He casts wither on the ghouls which I let though, he then plagues them which I attempt to stop but fail to stop him. They all die to plague, I fail every single roll.

Firing the warp flame thrower at the skeletons, he gets a rather clean hit killing 8. The poison wind mortar targets them as well but only kills off 2 more. The warp fire cannon tries to target skeletons as well but over fires only killing 2 and manages to kill off a wolfrat.

Combat and the rat ogres murder 10 of the zombies and they do no damage back, so they crumble. The stormvermin cut down so many of the zombies after combat resolution I am just left with the necromancer and a single zombie. The banshee does nothing to the clanrats, and they can't hurt her, but she crumbles to static combat resolution. Finally the doomwheel vs skeletons ends with the wheel killing 4, and I lose combat by 1. End of the turn and 6 skaven slaves die from death frenzy. 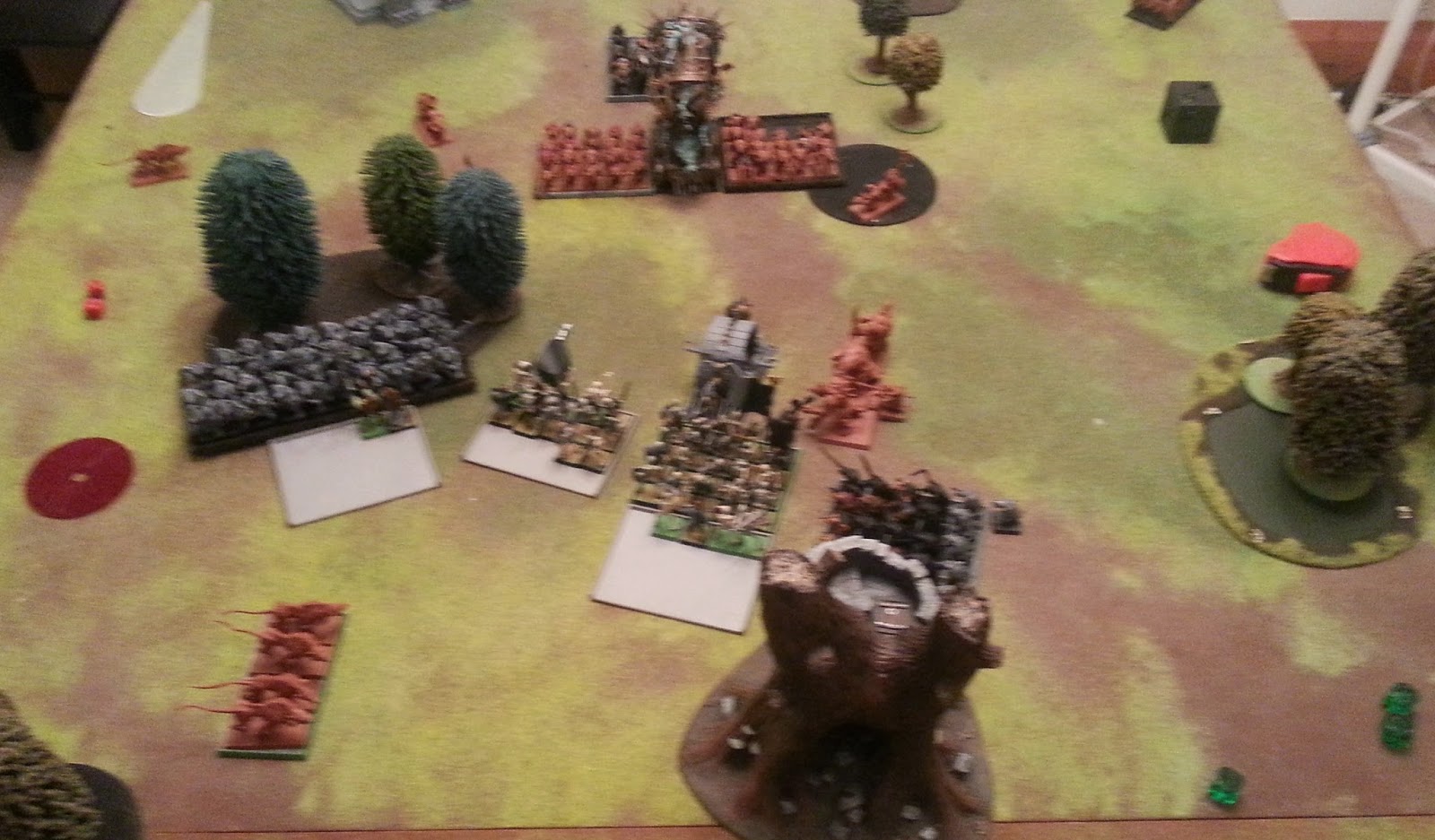 With its flank open, the other skeleton unit charges into the side of the doomwheel. I don't really have anything else left.

Magic is 9 vs 7 and I try to cast curse of years on the greyseers unit but it gets stopped. I then try to cast invocation and that also gets stopped as I roll stupidly low on my dice.

Combat, and the stormvermin cut down the necromancer and single zombie with ease and reform to see the skeletons. The skeletons vs the doomwheel, I do 2 more wounds to it, reducing it to 1 wound , he loses combat by 4 but still holds with a double 1! not cool rats. 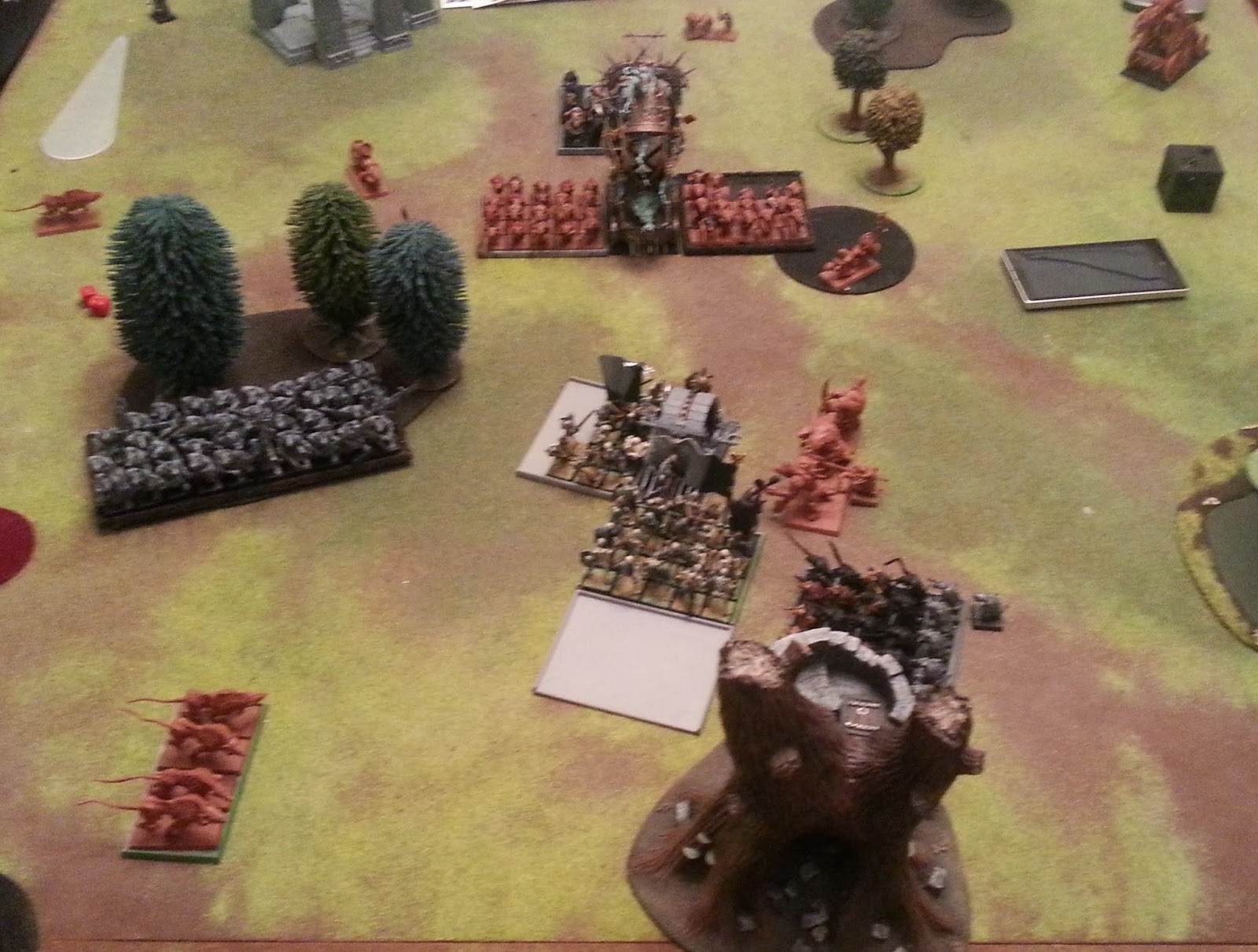 At this point, I'm in trouble and he multi-charges my two units of skeletons with everything.

He casts death frenzy on the storm vermin.

In combat I lose everything.

Well I have nothing else left on the table so that's a win to the skaven.

Victory to the Skaven.

Well that went very differently that I expected. I though I had enough bodies and magic to bring the hordes back up after the casualties come my way. The skaven did a lot more damage in combat that I expected them to, I guess thats because undead suck in combat with out support. That's fine, what isn't fine is that I relied on the magic phase far too much and it bit me in the ass.

By having so many necromancers and relying on them to boost my numbers and make my troops able to kill stuff. I also brought some bound items to help if I didn't get many power dice, but that back fired as well. The magic phase is a fickle thing, and by its nature and purpose that's what its meant to be like, so I can't really blame that. I should have gone with a much more hitty army but that's the models that I have available to me.

It was fun to use the undead again, but I think I will have to go back to the goblins again to see how they do.
Posted by Malduran
Labels: Battle report - Fantasy