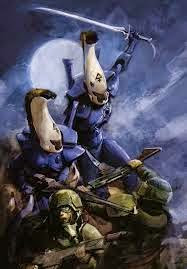 This is part 2 of my look at the Eldar Craftworld Formations, for those of you who missed the first one click here. Its half review, half my opinion on them.

If you like Aspect warriors, or want to use a couple of them in your army there is no reason not to take an Aspect host. You need to take 3 units of aspect warriors in any combination. There is no restriction on how many people you have in a unit but each unit must take an exarch. The benefits of this formation are that you can choose +1 BS or +1 WS and each model in the formation gets this benefit, also each model can re-roll failed moral, pinning and fear tests.

Every aspect warrior can benefit from this formation, but the obvious ones are the shooting aspects. While +1 WS is great, you will use +1 BS far more often. With each warriors hitting on 2+ with shooting they will just move down what ever they shoot at. Personally I believe that fire dragons and warp spiders are likely to gain a great advantage from this. As fire dragons can explode vehicles with ease, the 2+ to hit will mean they can strip hull points off a super heavy with ease. Warp spiders as well will wound most people on a 2+ or 3+ so the number of hits will help kill a unit.

Now as the only restriction is you must take an exarch, that means they can take a wave serpent transport to help out those warriors get to where they need to go. I am not sure, but if you take a wave serpent as a transport they should also gain the benefit of +1BS if you choose that, as the rules states all units, not all aspect warriors. This makes the wave serpents shield a lot better as it almost grantees you will hit with all shots when you eventually pop it. Personally I wouldn't play it that was as its defiantly not how this formation is meant to work. I'm surprised that their isn't a restriction saying they can't take transports. But if you want to play it that way, I can't argue.

Either way this is a great formation and suggest you try it at least once.

This is a more specific version of the Aspect host, where you have to take 3 units of Dire avengers, and one unit must take an exarch. The benefits from this are +1 BS, re-rolling the same tests as before and once per game all the units can make their weapons assault 3 for a turn. So this is another solid choice if you need some effective anti-infantry shooting.

Again they can take wave serpents so that they can be given protection so they don't die before they can use their killing strike ability to kill a unit. And again you can argue that the serpents will gain +1 BS as this formation has a different wording, instead of 'units' it states that each model which will include the wave serpent how ever you argue it.

While I don't believe this is as useful as an Aspect host I can see its uses, and from a fluff perspective it could be really cool to have in an army. If they all had objective secured like if they had been taken as a CAD it would be amazing, but then if they did there would be no point taking a CAD now would there.

A formation of 3 Crimson hunters, and 1 must be an exarch. Do you ever feel that you don't have enough anti-air? Well this is the formation for you. Each hunter Is separate, no no worries about having a large single unit. The benefits for taking this are preferred enemy (flyers, flying monstrous creatures) meaning that you will very likely hit and wound everything. With the regular hunters you will only miss on a roll of a 2, and the exarch will re-roll all of his misses. As they already re-roll failed armour penetrating results on flyers, they now can re-roll failed to wounds of 1 vs flying monstrous creatures. Most of the time this will mean all of your failed to wounds as their weapons are strength 8 vs most t 6 flying creatures. Unless you take star cannons on the exarch, in which case it still helps.

Now that's not all you get, in addition, all the models gain a 4+ cover save as standard. If you then decide to jink with a crimson hunter you can re-roll failed cover saves. This gives this glass canon some form of survivability which they have desperately needed since the last codex when they were introduced.

I think this formation is very good, but still a lot of points to put into 3 fliers. If your local meta has an issue with many fliers this is a great way to deal with them, but if not, half of the special rules are wasted. They still become more survivable, but if your not fighting flying models you might as well just put the points else where.

This is the formation that I have heard a lot of people complaining about, and with good reason really, but mainly when its part of a warhost (more on that next). You need to take a spiritseer, wraithlord, wraithknight and 3 units of wraithguard/blades in any combo. This is all very expensive so in games 1500 points you wont have much else. However the benefits they gain are rather good.

The big down side of wraith units are rather slow, but not any more, now they gain Battle Focus. Also with no restrictions they can take transports to help with getting the D where it needs to be. A second special rules is that all of your wraith units (it specifies which, so no wave serpent shenanigans) gets to re-roll failed to Hit rolls against enemy units within 18 of the spiritseer. So effectively if he is at the front all your D weapons are twin-linked, while still gaining a benefit in close combat.

So what does this all let you do? Take a wave serpent for your wraithguard, move 6, disembark 6, run up to 6, then use your 12 inch D weapons (with a re-roll to hit) to alpha strike what ever the hell you want. Wraith units shouldn't be that fast! If you take it take more wraith blade units, this is a lot more fair. Wraithlord really need this formation to be more useful, as otherwise they are rather slow, battle focus really helps them keep up.

I have played again this formation (battle report next week) and it really depends on what kind of army composition you have as to how devastating this formation is to face. Using mostly infantry in my force, it meant that this formation was faster than usual but nothing really happened which I would call unfair. However a friend of mine faced the same list with a dread mob and got annihilated in two turns, as the D weapon got into position turn 1 and just stripped hull points like it was going out of fashion.

I am a little divided on this formation as it all depends on what you are facing with it. Personally I would talk to your opponent before taking it in friendly games, but knock yourself out in competitive environments.

While not strictly a formation and more of a detachment, it is for all intents and purposes built up from formations, so I though I would add it in here. While I'm sure most of you know about this from the rumours from before the codex came out, I will go over it still.

To build a Craftworld Warhost, you need to take a Guardian host as a core element (see the previous article on formations for these) which will allow you to take up to 3 command elements and 1 to 12 auxiliary. The command sections are either special characters, the avatar, or a seer council. The auxiliary are the other formations, a unit of rangers, a wraith construct (lord, knight, fighter) or an engine of vaul (tanks).

By selecting your force this way you gain the command benefit Matchless Agility, which allows a unit to count as rolling a 6 for its run roll. So every one runs 6 inches every turn... because that's needed you see.

As you will have noticed in my last article on formation I didn't rate the guardian hosts, and said you would likely only take them if you were using this warhost, which I stick with, but it does make the battlehost and storm host a lot better with an instant run of 6. Another thing which greatly benefits from this auto run of 6 is the wraithhost who as discussed before become very fast and deadly when you KNOW you will be moving 12 inches a turn before you shoot, or if you want to get 6 away after you have. This benefit will still help the other formations but not as much, as the Aspect Warriors generally have the range to shoot and the combat ones have their own little tricks to get into combat.

The crimson death, windrider host and other vehicle formations have no benefit from this but still the army on a whole will be dangerous. And you still get all of the special rules of the other formations anyway, so you have a lot of special rules to keep track of.

This is very powerful but still the guardians tax is quite high. But it does allow you to just take the guardian host then 12 wraithknights if you are so inclined (aka a douchbag). But it does give you interesting options when creating your force.

For fun, you could have Jain Zar as your warlord, add her to a unit of banshees and with Matchless Agility have her and a banshee unit move 6 then run 12. a good old 18 inch move from a foot slogging unit. They will need to get into cover or get blown off the table, but its a fun little thing to do.


Over all with all of the formations I have gone over, like the rest of the Craftworld book, it does have some rather power full options, and if you are going to go to a tournament knock your self out. The way the other books have come out recently (skitarii, knights) you will likely need all your dirty tricks to win. But if you are just having a friendly game against your friends or just some guy at the club, don't be a dick, your both playing for fun remember. If your list if fluffy, then great, if your taking some of these things to power game... not cool, not cool at all.
Posted by Malduran
Labels: Article, Eldar