The wolf and the wyche... Dark eldar vs Space wolves 500 points

The eldar are swapped for their darker kindred in this week’s battle report. Unfortunately I didn’t have much time for a game so we had to make it a small skirmish.
Dark eldar vs Space wolves, 500 points, spearhead, capture and control (3 objectives).

So as you just read, I didn’t have much time this week, life gets in the way like that from time to time, its irritating like that. With only having time for such a small game I decided to swap out the eldar for their darker kindred, the dark eldar, just for a bit of a change.

So I went for a fast combat army, hoping that the small squad of incubi and wyches would be able to out match any one in combat. If I have a choice in the matter I would aim the incubi at smaller units so they might wipe them out in one turn. The wyches on the other hand should be able to hold their own against larger units (or power weapon units) waiting for aid from the incubi when they are free. A warrior squad for a bit of ranged help and the transports, once dropping off their units can shoot a bit as well. That was the plan anyway.

An interesting army, two transports and two lone wolves. I will need to take out the transports first, more so because of the torrent of fire they can put out which could pop my transports and warriors. The lone wolves will be more of a hindrance, but one I will have to deal with. They will also have to die to power weapons because the feel no pain they have will make normal attacks bounce off them.

The table set up was pretty basic, a few trees dotted about, rocks and hills. A fair few lanes of fire but also some line of sight blockers.

We rolled set up, spearhead, and game type, objectives, 3 of them.  We to see who set up first and its my opponent. The space wolves set up with both transports up front flanked by the lone wolves. I respond by having my warriors hidden behind cover save for the dark lance so I could still shoot at the tanks while receiving a cover save. Both my transports were placed behind cover so they would survive at least a turn. I roll for what drugs I have a get a 6, extra pain token, not bad, so that’s a FNP save on the wyches.

I roll to steal the initiative but fail. So the game starts.

Both the tanks move forward 6 so they can still shred me with their guns, the rune priest gets out of his razorback with his entourage of grey hunters attempting to reduce the strength of the warriors before they have a chance to do any harm. The lone wolves both run forward to keep up with the tanks.
The rune priest starts the shooting phase managing to get 6 shots of with living lightning but due to a very unlucky roll hit and to wound no casualties are taken. Following the priests lead both razorbacks open up on the warriors but thanks to the cover saves I only lost 3 warriors in total. Not a bad first turn. 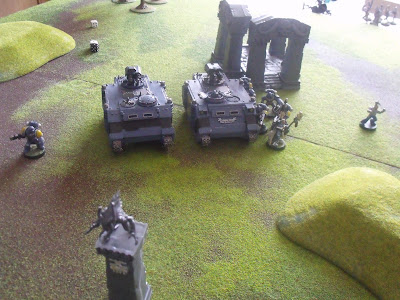 Moving forward again, the tanks move to be able to see the raider, the rune priest then moves in front to also target the transport if the others can’t crack it. One love wolf moves to prevent it falling in to the enemies’ hand, whilst the one closest to the venom stays close to the razorbacks.
Shooting starts with the rune priest casting living lighting but only manages to summon one lighting bolt which misses the raider. The heavy bolter follows the priests lead and manages to get a single penetrating hit, exploding the transport. 3 wyches die as it crashes to the floor. The assault cannons then target the warriors but again thanks to the cover save no warriors die.

The venom moves forward towards the lone wolf, disembarking the incubi. The wyches run out of the crater and moves behind the trees to protect themselves from incoming fire. The warriors hold their ground attempting to destroy the transports.
A barrage of splinters comes from the venom as it tries to thin down the grey hunter pack out in the open. From the 12 shots it manages to down one of them. The warriors target the razorback with the assault cannons and manage to hit this time, penetrating the armour, wrecking it. That was one lucky break; I have a chance to get back into this game. The wyches then run trying to get closer to the lone wolf guarding the objective.
Combat and the incubi charge the lone wolf and cut him down with out any fuss, just a straight kill. Gaining a second pain token, they only manage to move 1 inch from the massacre move.

The grey hunters still in the razorback get out and move towards the incubi, the other grey hunters move to encircle them.
Summoning the powers of the storm, the rune priest calls two thunderous bolts down on the incubi and manages to strike two down (love rolling 1 and 2 for armour saves and FNP) then a further one dies to the bolter fire from the grey hunters. The second squad of grey hunters fire into the squad and manage to reduce the incubi to a lone survivor (even the haemunculus died). The heavy bolter from the razorback targets the venom but fails to penetrate the armour.

Seeing the incubi in desperate need of assistance the warriors surge forward, determined to kill some marines. The wyches move as quickly as possible towards the objective holding lone wolf.
In a hail of splinters the warriors fire at the closest grey hunters but only 4 of the warriors are in range. They still manage to take down a marine for their efforts though. The venom follows suit and manages to put a wound on the rune priest as well as killing the melta wielding marine. The wyches run into assault range of the lone wolf. At the end of the shooting phase the grey hunters take a leadership test but pass it on a 10... so close yet so far. Damn.
Combat phase and the lone incubi charges the stragglers and kills the two remaining marines, leaving one on one combat with the rune priest. The priest then attacks back but misses all of his attacks, but passes his moral test.
The wyches charged the lone wolf but fail to do any damage thanks to FNP but take no casualties themselves thanks to dodge. The combat is a draw.

Believing the rune priest can handle himself the grey hunters move towards the venom. They shoot it with the melta gun and manage to wreck it (what did I expect from a vyper... I mean venom). The razorback shoots at the warriors and manages to take down a single model with its heavy bolter (looks like I didn’t need that cover save that much after all).
In combat the incubi manage to score a single hit on the rune priest but fails to wound him, leaving himself open to a most painful death at the hands of the rune priest. On the other side of the battle field the lone wolf survives the attacks from the hekatrix but is then dragged down by the sheer number of attacks the wyches throw at him. It was unexpected but welcome.

Seeing the only way I have a change to win is it if kill the grey hunters, or make them run for a turn, I take my chance. The warriors move to the centre objective and rapid fire at the grey hunters. They manage to take down a single model how ever so fail in their task. The wyches hold their ground at the objective.

Seeing what was going on my opponent sent the razorback over the remains of the destoryd one to target the wyches. The grey hunters get into range of the objective while the rune priest moves to confront the warriors.
The rune priest uses living lightning on the warriors but again only manages to summon one bolt which fails to wound. The grey hunters rapid fire into the warriors only taking one down. The razorback targets the wyches with its heavy bolter wounding 3, I go to ground with the wyches hoping to help their odds at surviving but fail the cover save, FNP however saves all three of them.
The rune priest then charges into the warriors and takes no damage, and manages to kill 3 of the warriors. They brake from combat preventing me from having a chance at a win.

Nothing I can do, at this point I can’t win, only loose if the game continues, so I hope the game ends now.

Which is does, a 2 appears to see if the game continues.

Well that was anti-climatic. But better than a loss I guess. Using dark eldar was a nice change from eldar, they have some more interesting units and I can almost customise my squads, something I miss with the eldar list. I especially like they incubi, like banshees but can actually kill stuff, its a nice change. Maybe I should play with dark eldar more? to be fair I did (technically) start collecting them before elda, gotta love the totally unfair 3rd edition starter box. Anyway what did I learn?

·         While I know the transports are as weak I'm used to eldar ones, so I should have been a bit more cautious. Maybe just boosting with the raider first turn would have been a wiser move.
·         At such a low points value anti tank is hard to come by so I don’t feel as bad I should about being taken by surprise by two tanks.
·         I am disliking the rune priest and his damn living lightning. Its just a scary potential weapon.

Well nothing much from this game, it was just a quick one after all. I will probably end up doing a few small games like this once I get the traitor guard up to a similar standard, but that’s a long way off.