Returning to my evolving list I decide to give it a spin against chaos space marines. We get purge the alien with dawn of war deployment. This would be a good test for the list as its going against the newest codex so let’s still how the eldar can cope against what I'm expecting to see 6th edition turn into.

A note to begin with, I'm experimenting with layouts for my battle reports so if this isn’t as good as normal please forgive me and let me know, but also if you like any changes, make sure you speak up so I keep them.

The mission
We roll and get purge the alien, with a dawn of war deployment. No night first for first turn is rolled nor is it rolled turn 5 (just easier to let you know now). The terrain was set up by a neutral 3rd party which isn’t quite rule book but seems fair enough for this game as it’s just for fun.

We roll for who deploys first and chaos win, selecting to set up first and wanting to go first. So chaos set up with the prince and khorne berzerkers on my left, while the obliterators, havocs and chaos marines on the right. Both terminator units are kept in reserve and going to deploy via deep strike.

I deploy very gingerly, I'm very cautious about his havocs and obliterators so I'm not sure what to do with my tanks. I set up the warriors and dire avengers in the ruin with the war walkers (WW) hidden behind the ruin out of sight. The tanks, after much deliberation, were placed in the centre of the table out of sight of the havocs and their 4 autocannons. I infiltrate Karandras forward as close to the marines as possible and the path finder’s in the rocks in the centre.

I roll to steal the initiative but fail, chaos get first turn.

The first turn starts with the prince swooping forward on its wings followed by the khorne berzerkers. On the other side of the table the chaos space marines walk forward.

With an enormous explosion the falcon is destroyed by the obliterators lascannon killing 2 of the fire dragons in the process, who become pinned. Following suit the havocs destroy the venom with an explosion killing 3 of them causing them to flee.  Not a great first turn for me. 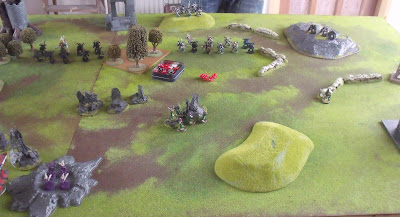 My farseer casts prescience on the war walkers as they move forward to target the obliterators. The ravager moves to get in range of the obliterators and the prism moves to see the havocs. Karandras moves straight for the chaos marines who have wondered into assault range if I get lucky. 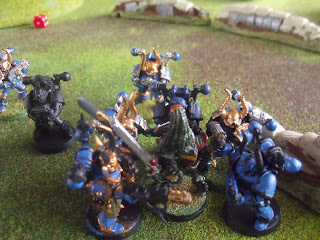 The shooting phase is a very short one, every one fails to do any wounds with their shots except for the ravager who deals a single wound to the obliterators. My biggest disappointment was the fire prism who scatter max distance away.

Combat phase and Karandras charges the chaos marines, but as I'm going over terrain I have to roll 3 dice, but I get lucky rolling 6,6,5 getting me in range. The chaos champion issues a challenge which is accepted, but he deals no wounds, only to get ripped to shreds by the phoenix lord. Chaos still hold. 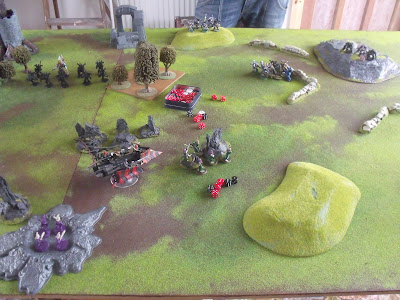 Reserves are rolled for, and both terminator units come in, one is placed to the left side of the ruin and they lock on, and the other is placed in front of the ruin and scatters to the edge of the table, just a mm was in it but he was dead on the edge and avoided a mishap.
Berzerkers keep on running forward and the prince returns to the ground jumping to the fire dragons. The obliterators move forwards.

Shooting starts with the havocs shooting at the ravager, getting 4 pens, but all are jinked off. The oblitz follow suit and get 3 pens, all of which are jinked as well (how lucky am I!). The terminators on the edge shoot at the wyches and kill them. The second unit of terminators shoot at the dire avengers and 2 of the aspect warriors are cut in half.

Combat starts with the prince assaulting the fire dragons killing 3, but the lone survivor holds his ground. Karandras takes no wounds from the chaos marines and kills 4 of the warp tainted, the rest attempt to run but are cut down. He consolidates towards the havocs. 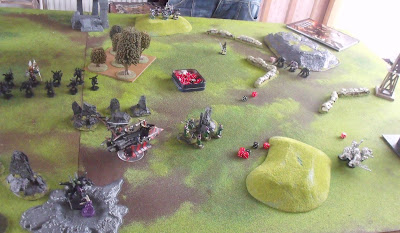 Praying to the dice gods, I place the template over the terminators, and the shot locks on! All are hit, wounded, and none of them pass their invulnerable save. A combination of the war walkers and pathfinders manage to take a single wound off the obliterators (those guys are hard to shift). The dark eldar warriors and dire avengers combine fire and shoot at the remaining terminators. They manage to kill 4 of them, all thanks to misfortune, an awesome power now I have seen it work properly.

With a roar karandras charges the havocs, who respond with their own in the form of autocannons, and they manage to do a wound to him with over watch. A challenge is issued again, accepted, and the combat is just like the last one, a dead champion and the unit holds its ground. On the other side of the table the prince kills the last fire dragon. 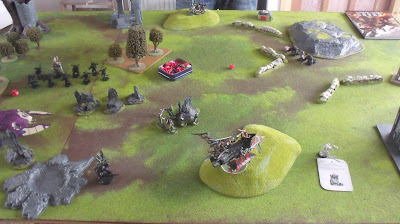 The berzerkers run up to the fire prism while the prince moves up between the ravager and the pathfinders as he’s not sure what to charge. Alone, the single terminators moves towards the dire avengers attempting to get revenge. The obliterators move towards the war walkers.

Straight to combat then, and the berzerkers charge the fire prism, making it explode but no one takes any wounds from it (shame). The prince charges the ravager and does a single glance and a pen which rips a dark lance off it. Killing 2 dire avengers the terminator wins combat against the eldar but I hold.  Karnadras finishes the job, dealing another 4 wounds, killing off the havocs.

Misfortune Is cast on the surviving terminator while prescience is cast on the war walkers. The ravager moves away from the prince while kharandras moves towards the obliterators.

Shooting starts with the ravager shooting at the prince, and a wound is stripped away. The dark eldar warriors shoot their poison weapons at the daemon as well and manage to wound the beast as well. The war walker shoots at the prince as well, causing him to fail 3 armour saves, but thanks to his re-roll, he saves them all, that gift might just cost me here.

Combat phase ends with the terminator dyeing before he can strike the eldar, thank god. 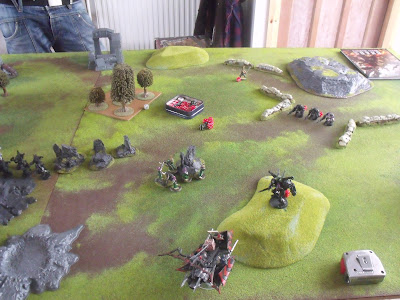 The berzerkers move towards the pathfinders, the dire avengers get a shadow cast over them from the daemon prince as he moves towards them.

With another echoing roar is heard over the battle field as the ravager explodes when its hit with lascannosn from the obliterators.

Combat phase starts with the berzerkers attempting to charge the pathfinders, but thanks to a lucky over watch the closest marines is shot through the eye, leaving them out of charge range. The prince charges the dire avengers killing 4 of the aspect warriors, taking no wounds in return. The lone farseer runs from combat but gets cut down.

The dark eldar warriors shoot at the prince and take a wound off him, getting past that re-roll for failed armour saves. The pathfinders fail to take his last wound so the war walkers has to change target and shoot at the prince, managing to down the daemon once and for all (well 666 days isn’t it? Or is that just the grey knights that do that?)

Karandras tries to charge the oblitz but fails his charge, as it was a long shot.

The berzerkers move closer to the pathfinders making sure they don’t fail this turn.

Finally the last war walker is wrecked but the obliterators as the berzerkers charge the pathfinders just murdering them. 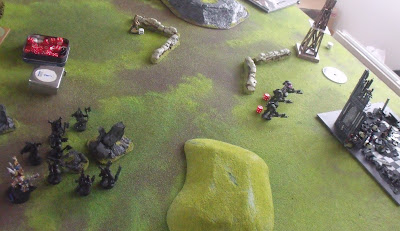 The warriors do a single wound to the obliterators...

We roll to see if the game continues and it ends.

So another loss for me, not very surprising really as it’s a trend it seems. Impressions of chaos for my 3rd battle against them? Not bad, the damage out put the chaos lords can give is ridicules, the prince is very pricy and would have died a turn earlier if it wasn’t for that very lucky roll on the table. Its character full so I like it. I never realised how resilient the obliterators are, especially when they move the wounded models go to the back of the unit, that's how I never killed a single model encase you were wondering.

Have I learnt anything from this game? I sure hope so:
·         Deployment: I feel I made a mistake here, I decided that I would ignore the combat portion of the chaos army and focus on killing the shooting side. As there was more line of sight blocking in the centre of the table maybe I should have focused everything on the combat portion then striking full force at the shooting part. Either way I had to divide them to stand a chance. Thinking about it that’s what I defiantly should have done.
·         Karandras: Taking a phoenix lord at 1500 points game, especially such an expensive one, is a risk. Was it worth it? This game he only really had 2 targets, the marines and the havocs, everyone else would have just smashed his face in. Next game we will see that happens with him, but provided he doesn’t go toe to toe with power fists or power axes he should be fine.
·         Pathfinders: well I took then like people suggested and they didn’t do great. Let’s see what happens next game.
·         Dark eldar warriors: Having them instead of the guardians was defiantly better for this game as they took wounds off high toughness models. If it is worth it next game, we shall see.
·         Fire prism: made its points back blowing the terminators off the table, but I just feel like it’s a liability. I don’t know why, I just feel that what it will be. More experimentation is required.

So that’s it for this battle report. I feel this list will take more fines compared to what I normally take, so wish me luck.
Posted by Malduran
Labels: Battle report - 40K, Eldar, Evolving list