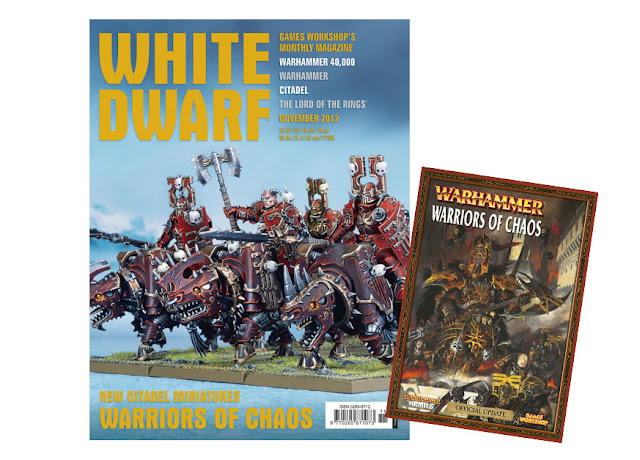 Again this is very late but I’m going to put it out there anyway, with last month’s new style of white dwarf I got curious to see if they could keep it up and see if any bad habits have crept back into the magazine. So this is another little review of white dwarf for you to get my impressions of it.

Keeping with last month we have a simple cover showing off the new models being released as well as on the back which is a little dull, last month it was impressive, this time it’s just boring. Just my opinion but they could have done more. The big releases this month are the chaos war shrine, skullcrushers of khorne and Hellstriders of slaanesh. What are those last two I hear you ask. Well they are new units which come with rules in a handy little pamphlet, but more on that later. A hand full of the special characters who don’t have models get released as well, but not one for the troll king, I’m guessing because they are going to axe him from the next warriors of chaos army book, but that's just my opinion. A load of old metal models get released in fincast etc... Nothing else fancy for fantasy. 40K however gets the ‘wall of martyrs’ a £100 kit just for scenery. If it had rules I’m sure people would buy it straight up but without, it just looks cool. Which is by no means a bad thing, it just might have been nice for it to do something as well. The kit does look stunning though, as I'm sure most of you will have seen it before I would get one myself if it wasn’t so pricy.

Back to those new models, they have new rules as they didn’t exist in the background until this month. While the rules for both seem sound and quite usable for the game what bothers me is the background they have given them. Skullcrushers (bit of a lazy name don’t you think?) are kind of believable, chosen knights who have killed loads in the name of khorne, ok I will buy it, but say it was a bit more gusto, anything, don’t jsut be lazy. And the hellstriders, no, just no, why not use background like the daemons got, that its a new war machine or something, just pretend they have always existed. Maybe say they got mistaken in the past for marauders or something, anything. I just don’t like the fluff for them. So does that mean nurgle will get something along those lines two? Will tzeentch?

Moving on, forge world once again get a few pages this month showcasing some of the warhammer forge models which have been out for a month or two now, so I’m guessing sales haven’t been great for them. I love the look of the magma dragon but hate the elemental of fire. Jack just doesn’t do anything for me; he’s just not quite the embodiment of fire and destruction I see. He’s not a bad model, just not to my taste. Black library gets a couple of pages showing off new books and so does a new Role playing game called ‘only war’ where you take on the role of someone from the imperial guard. If its anything like the imperial guard you probably die horrifically after 10 mins, or if you’re lucky you get a nice back story then die after 15 mins. Still it sounds interesting and even though I’m not really a guy who plays role-playing games like this, I would be interested in giving it a go.

Something a little different from last month is we have ‘the army of the month’ which showcase a very beautiful and large army that has been building over years. Its an empire army which uses a very surprising number of old mordheim models which must have cost a bomb to get so many of, all being metal, even at the time of release they weren’t cheap. The owner talks about how is army has evolved and how he models the base different depending on what they were build for, as he has some lustrian based models that he used back when the lustrian campaign book came out. Its cool, I only wish my armies got pained.

A little article with Jervis Johnson again who goes over what he said last month and talks about how he likes rules restrictions in tournaments provided they help improve the fun of the event. Some might say its a little contradictory to last month’s article of how they want to remove restrictions, but this way it always you to have you cake and eat it I suppose, as placing them in events is preferable to penalising everyone who plays.

The battle report, this month it’s a warhammer fantasy report between ogres and chaos (surprise surprise). Now I have issues with this, not because chaos win and they make the new models look amazing and something everyone wants, not because there are less pictures then you would find in a dictionary for the blind, not because its just a sneaky way of bigging up the models again, but because the actual report is two pages long. It doesn’t do turn by turn, fine, but it just heaps everything together with opening moves, and end times. That's it... it’s so short you don’t get a feel of what happened or of anything that didn’t involve the new models. It’s just frustrating that they took that away from the report. Christ I would say my reports are better, and they are boring and long! Dear god.

Painting again and it shows more random stuff which while not as useful to me, could be good for someone else who plays warriors or chaos. Rust effects for tanks, again useful but not for me right now. WE do get a rather large modelling section showing off some conversions which is alright to read and look at. Can’t complain.

Finally at the back of the magazine we get articles on the design process when making the wall of martyrs and the war shrine. I wouldn’t say this was grade A material but it was interesting provided they don’t throw this in every month as a filler section.

In conclusion I would say that the magazine had a lot to live up to after having what I considered quite a good last issue with its reinvention. Now I didn’t expect it to improve on last months, I just wanted it to maintain or try something new, not going back to cheap tricks with its battle report and clogging the magazine with adverts of the same models over and over again. Great you got less than two months ago but I defiantly saw an increase from last month! Ok back to my point, it’s not worth the money again, I will buy one more magazine then forsake it unless they have rules in for new models I might want to use. Unfortunately that's all that persuade me to pick up this monthly catalogue. I know this has been a bit of a rant but I hope it’s helped you a little, and if not, I hope its been an interesting read.
Posted by Malduran
Labels: Article