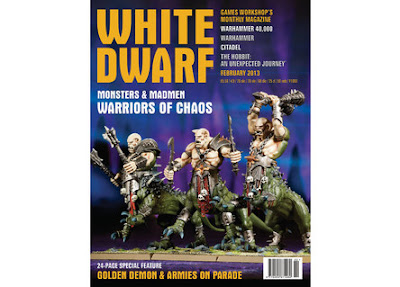 I know it’s a lot later than usual but I will share this review with you all anyway. Not that anyone cares that much but it’s not my fault, the place I normally get my WD from didn’t stock it still a few days into feb... I have no idea why, just happened. Anyway back on topic... here is my review for White Dwarf: February 2013.


What’s new with this magazine? Some new warriors or chaos, bit of hobbit stuff. That's about it. Read my other reviews if you want more information...

So here we go. The new models I think are pretty cool, the Dragon ogres are a hell of a lot better than the old models. Big, powerful and defiantly scary. A new chariot, but I dislike both of them, especially the gorebeast chariot, the hulking monster just looks like a gormless dog, I don’t like it. The forsaken have a very array of mutations but I feel they may have over done it. Some of the parts looks quite interesting and could be good for 40k possessed. I don’t like the current 40k ones so you could easily convert them. While not a new model, the chimera is given to the warriors of chaos, that surprised me. The model was designed for storm of chaos and that was it, I would imagine that sales were low so it was quite an interesting call to give it to an army. For the hobbit you get a elves and dwarves... I'm not that arsed about the hobbit.

We have a black library update, and I noticed something, the gotrek and felix books are no longer written by Nathan long, a fellow called Josh Reynolds takes over. I don’t know if that’s a good thing or bad thing as I have never heard of the guy. I never heard of the others. Not important to the review, but this for once has been of use to me. This makes me think that maybe my ignorance of black library may have made me a little harsh of its article in the past. So I have a little bit of respect for it now.

The same can’t be said about the forgeworlds latest... the main article is full of rather old models including the voss pattern lightning that forgeworld showed back in December. 2 months old that news... not cool. At the back however it has some previews... for the last time I'm going to ask that they please add that to the forgeworld section so it’s all together in one nice place. I don’t’ know if it’s bad design or something else... either way It winds me up.

A good point for this mag is that it has a beautifully painted army of the month, they have yet to disappoint me so I really hate saying this but this review so far isn’t that much different from the past ones. They are getting a a little repetitive. Back onto the army, it’s a custom space marine army called the Crimson Heralds. A lot of good conversions, and one thing which looks really good, the scouts all have forgeworld elysian drop troop heads. It looks really cool.

The battle report impressed me again, its two armies that are painted by people, not eavy metal, people. What’s even better is that its Orcs and Goblins vs the new guys, warriors of chaos... and the kicker is, the green skins win! It’s so refreshing seeing armies that are painted by people, they have a lot more character and I just think they are a lot more attainable standards for people to aspire to. It’s like showing size 0 models and normal weight people, the normal are a lot healthier for the hobby as it won’t make people stop painting because they can’t paint as well as eavy metal. Especially the goblin army, it looks beautiful and with time you could paint it. What amused me was he uses a colossal squig as a giant... never thought of that, might try it.

We get Blanchitsu again, but again it’s not his work, its other peoples inquisitor warbands. The more I see them the more I like them but come on, aren’t we all fed up of the same sort of bands? Let’s see something else, even if its the same sort of theme. Like chaos warbands, command squads from other races. Just change it up a bit!!! Granted the models this month are very well painted but its just the same stuff.

We get part 2 of golden demon and some beautiful and some of these models can just put you to shame. A huge variety and beautifully painted. Along for the ride is the normal articles from vetok and Johnson... no point going into that.

Maybe this is a terrible way to review white dwarf but I'm getting board of practically the same articles month in month out. I miss what they used to do with one off articles, maybe a small series over 3 months then move onto something totally different. Obviously they didn’t like this and hence the formula change. Or am I just looking through rose tinted glasses? I only buy white dwarf now so I can review it (and maybe the painting articles) and maybe its going down the pan each month. I just hope next month they add some good rules or mix it up a little bit. Bah, I'm losing interest in it.
Posted by Malduran
Labels: Article