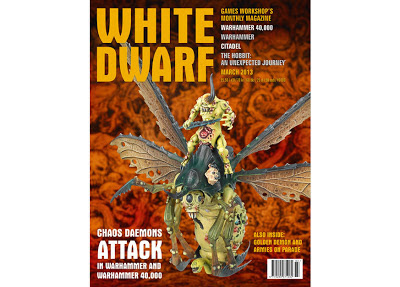 Another month goes by, and yet again I’m late with the white dwarf review. One day i will be on time with it, probably. So what does this month has in store for us? Well new daemons for both 40K and fantasy.

The first thing that strikes you is that we have a lot of new models for the daemons. A new herald for each of the gods except for tzneetch, but i guess we already have the fine cast guy on the disk. So what else is new? Well a multiple kit of a burning chariot of tzeetch, a  kit of plague drones which are plague bearers riding massive flys (not to be confused with the blight drone) and a khorne multi kit. Over all i think the burning chariot is the only one which is worth having, the khorne chariot i think looks vile (and not is a good daemonic way) and the plague drones... meh they are ok. We also have some hobbit new releases, some dwarves and men of dale. Again i’m not interested in the hobbit so let’s skip over that. Actually that’s ALL the hobbit stuff in the magazine, which is surprising as it’s meant to be the new 3rd game. Apparently it’s been dropped already.

So what do we have in store for this month’s mag? Well we have the obligatory licensed games, black library, forge world latest all taking up a few pages, the usual stuff that’s not really worth mentioning any more, its already been said.

Army of the month is a large lamenters army with allied grey knights, plus 3 warhound titans. Not that I’m jealous or anything, but i wouldn’t mind a couple of titans to my name. Oh, and he has a thunderhawk as well. Nope... still not jealous. The guy (David roberts) says that he is fast at painting but not very good, the guys army puts everything i have ever painted to shame so i automatically hate the guy. Damn i wish i had an army like that.

We have a 40K battle report between daemons and space marines. It doesn’t have a points cost, for the battle report, but from the fact the daemons have 3 HQs i’m guessing its 2k+ points. Spoiler, the daemons win, just. I’m not sure if i believe the battle reports any more, while they do have aspects of a real game, they seem very staged at times. I’m not saying its a set up, making the new army win, but i feel that every now and then they might tweak the dice so one side (the new army) doesn’t get smashed right away. I wish they had a proper battle report instead of just show casing the new units and talking about them at the end. I know, i know, the mag is just there to sell plastic, but would it be so wrong to have a real game in the process? Apart from that i actually liked the battle report compared to some of the other ones, it gives a few little hints at the new daemon rules and it gave a little more info than normal. So not 100% bad i guess.

We finish the Golden damon 2012 series, and to my surprise a model that is currently being displayed in my game clubs display cabinet was shown in the mag. It’s a beautifully pained and converted jules le jongleur on top of a stack of barrels. We have a few other good models including a sister of battle kicking a wytch in the face, a plague bearer command squad and a nurgle champion riding a thundertusk. Some of them are really good, others i wonder how they got a mention. They are all better than what i can do, compared to some, they are crap.

The paint splatter article is disappointing this month, the basic daemons are very standard colour schemes, while this is good for beginners, having a basic article for beginners, maybe a little more then an expert one as well. Just having 4 basic ones is a little disappointing.

We have yet another article by Jarvis Johnson and Jeremy vetock, neither of which is useful or that interesting. I swear Johnsons could have been summed up by the phrase ‘ if you disagree with you opponent roll for it, we do’ Boom, just saved a page and 9/10 of text that could be used for something good. Honestly i’m just tired of the same pointless articles. Of course we get yet more Blanchitsu, same old same old, i just wish we had some variety, Christ I’m even stating to think it should be space marines instead. At least with some space marines you would have colour differences, maybe a few more epic poses. I just wish this would stop.

I know my reviews of white dwarf are almost identical at this point, but don’t blame me, blame the guys writing white dwarf. Something that surprised me about this magazine was that with the daemons being the released for both 40k and fantasy the only thing that fantasy gets is a two page spread. I would have though it would be split half and half, you know, as we have two book releases. Now I’m not saying two battle reports should have been present (it would have been nice) but a little extra about the fantasy version of the daemons would have been nice. Right now i have no idea if anything has changed at all for the fantasy daemons, bar the new releases. At least with 40k i know they have a warp storm table. Maybe 40K sells more than fantasy, i don’t know, maybe they are waiting for next month (a stupid idea if that’s what happens) but i think they wasted a prime opportunity to sell more fantasy stuff.

Over all I’m getting very disillusioned with white dwarf, I’m starting to think that maybe the new format wasn’t such a great change. While it looks more professional it lacks some of the originality of the old design and it more a soulless reprinted magazine month in month out. That’s just my opinion though, maybe some of you really like it, maybe that works for you, but i just miss things like alternative army lists that you just look at and laugh. Like the feral orks, or the kroot mercineries. They weren’t exactly powerful, just a very fun list to play around with from time to time. Anyway that’s enough from me on this topic. Hope this was a little time filler for you.
Posted by Malduran
Labels: Article