40K at the Forge: Game 3 Eldar vs Necrons

Game 3 of 40K at the Forge and I’m not in a bad position with 1 win and 1 draw and only 2 people currently both having 2 wins. After all the games are drawn the 2 players with 2 wins each are facing off, so if i can pull out a victory here i will come second. Who is my opponent? Necrons, i have never played Necrons before so this will be very interesting, i have no knowledge of the rules, but i have a few ideas of what they can do.
The Armies

I honestly have no idea if this is a good list or a bad, or even what’s the biggest threat. I will just have to wing it and see what happens.

Purge the Alien mission and we had dawn of war deployment again. I won the roll to select which side, so i took the little terrain that i could muster and then won again the roll to set up and go first. He then placed down his defence line.

I deployed my large war walker squad on the right, flanked by the vypers as i could see the defence line easily. The other war walkers deployed forwards in an attempt to shoot something before the got destroyed (i couldn’t out flank them as they would get intercepted and killed probably). The dire avengers went on the left to support the little walkers. The guardians and other dire went on the right behind the cover. Looking at it now, it seems like a bad deployment.

The necron player then set up his warriors behind the line, manning the gun with the immortals and destroyer lord behind them.

The farseer casts prescience on the large war walkers. I move every one forwards to get in to range as i positioned the warlkers and vypers badly.

Shooting starts with the war walkers shooting at the warriors behind the defence line but with night fight they have a 2+ cover save, some how i manage to kill 4 though. The falcon shoots at the quad gun but fails to do anything thanks to its 2+ cover save. Nothing else really happens apart from 3 of the 4 dead warriors stand back up. 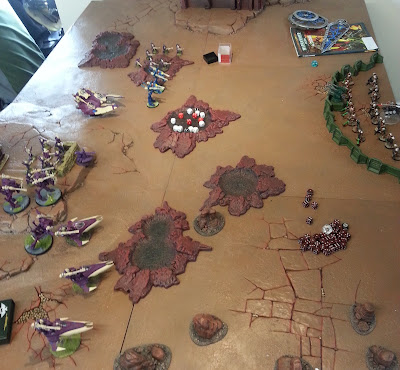 The necrons don’t move just shoot. The quad gun is fired at the small walkers and wreck 1 and glances the other. The cryptek uses its tachyon arrow at the falcon but the 3+ cover save makes it bounce off. 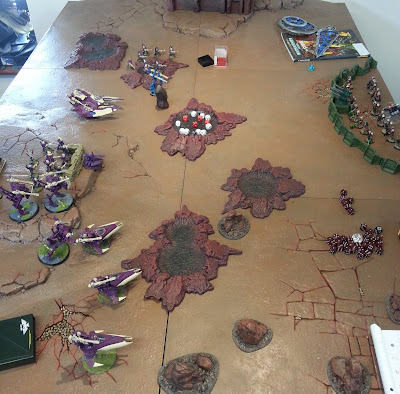 Thank god no more night fighting, i cast prescience on the war walkers again and move around to stay in range but out of there’s. Same with the vypers.

Shooting starts with the falcon on the quad gun which manages to destroy it, so no more quad gun shots. The combined fire of the guardians, war walkers, and vypers all then kill the remaining 9 necron warriors. They can’t stand up this time... 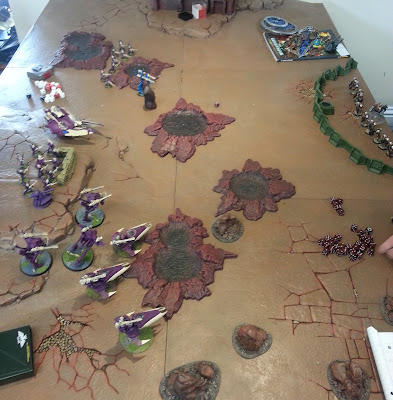 I pray his night scythe doesn’t come in but it does down the left hand side. The destroyer lord then leaves the immortals and goes forwards after the small war walker.

The night scythe shoots at the dire avengers and kills 3 of them, they hold though.

Attempting to charge the war walker the destroyer lord rolls an inche to short and fails the charge, over watch does nothing to him. 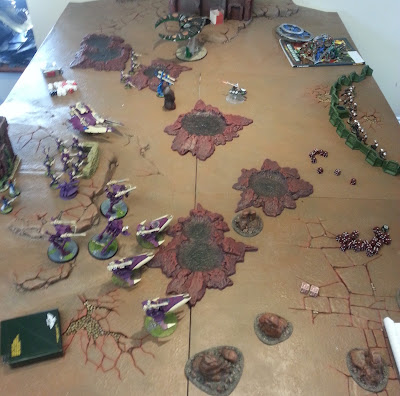 Prescience again on the war walkers who are going flyer hunting. The fire dragons get out of the falcon and go after the destroyer lord (before i realised he had a 3+ invulnerable).

Shooting from the war walkers get a single penetrating hit on the flyer and locks its velocity, so it has to move at crusing speed for the rest of the game. The fire dragons shoot at the destroyer lord but fail to get past his invulnerable save (damn 3+ invulnerable), the falcon however manages to take a wound off him. The vypers shoot at the immortals and kill a single model who fails to get back up (Toughness 5 is hard to get past). 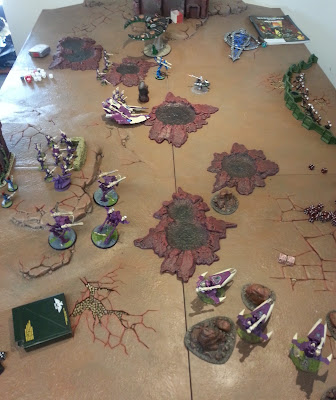 The necron warriors get out of the night scythe and the lord leaves the unit. The flyer then leaves the table. The immortals move towards the vypers.

The warriors shoot at the lone walker and wreck it easily.

Declairing a charge at the flacon the destroyer lord isn’t shown up twice, and makes it into combat nad destroys it in a great explosion killing a fire dragon. The other lord charges into the dire avengers and kills 2, but they hold (just realised now he couldn’t have done that... getting out of a transport and all, but i doubt it would have made much difference on the game). 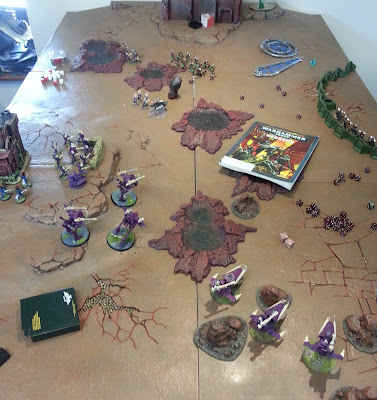 The move away from what i can, and cast prescience on the walkers again.

In a last ditch attempt the fire dragons shoot at the destroyer lord but this time wounds the monster. The war walkers shoot at the warriors but only manage to kill the cryptek and a single warrior thanks to its 2+ armour save saving about 6 shots before it dies. Neither of them get back up.

Combat and the dire avengers manage to survive another round, only losing a single member of the unit.

The flyer comes back onto the table towards the vypers and the warriors go after the fire dragons. The destroyer lord goes after the large unit of war walkers.

The flyer wrecks a single vyper and the warriors kill off all the fire dragons.

Crazed from the destruction he has wrought already, the destroyer lord charges into the war walkers, but thanks to prescience i get a good number of over watch hits onto him and manage to take his last wound off him. And he stays down too! The over lord again fails to kill off the dire avengers. 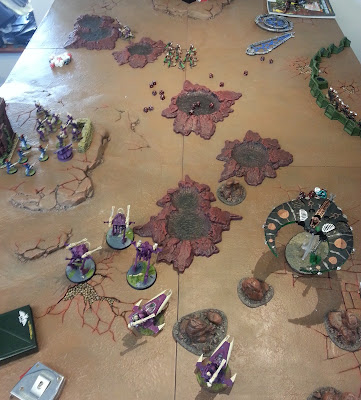 I move the guardians towards the warriors.

I shoot everything i can at the warriors and only manage to kill 6 of them, that is bad for me.

In combat the dire avenger is kills himself to the mid shackle scarabs.

The warriors and lord walk into my deployment zone for line breaker. They shoot at teh guardians killing 2.

We roll to see if the game carries on... No.

Well that was an interesting experience, and if i did it again i would have done things differently. Defiantly i would have my army focused in the centre so my whole army can focus on 1 unit at a time, especially so i could have dealt with the necron warriors getting out of the night scythe. Night fight didn’t do well for me, but i can’t complain about that at its part of the game. If it carried on to turn 6, i don’t know, maybe i could have done more damage? Possibly kill the necron warriors; maybe get another glance on the night scythe if i get very lucky. I would still have lost then, so i needed turn 7 to kill off the lord for line breaker, maybe, just maybe i could have got 5 – 4 (he would have killed at least another unit), but that’s best scenario for me. Still necrons are scary when you don’t know whats going on.

What did i learn?
·         Keep troops next to each other: Don’t just have a unit of dire avengers on its own, that was a bad move on my part. Especially going first, if he wanted to he could have just blitzed up a flank and killed them.
·         First turn: i think it was the right choice going first, where as the other games going second was defiantly better for me. If i magically killed all his units first turn i would have won, but that was never going to happen was it.
·         Necrons: focus on one unit at a time, trying to kill a few hear and a few there was never going to work with that damn 5+ well be back roll (or what ever it’s called today). Destroyer lords are hard as hell with T6 and a 3+ invulnerable save. Taking them down with small arms fire (or a shed load of scatter lasers) might be the way forwards.

Anyway it was a fun game and at the end of the tournament i had 1 win, 1 loss, and 1 draw, placing me 8th out of 12.... damn, bottom half. Better do better next time.
Posted by Malduran
Labels: Battle report - 40K, Eldar