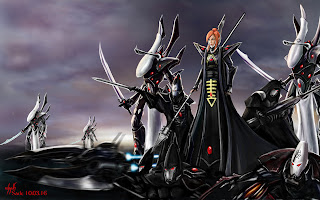 Well this is the second practice game for the tournament but I used a different list. This list revolved around fire dragons instead of wraithlords. This one is against blood angels.

We rolled Purge the alien and just used pitched battle deployment. My opponenet won the roll to go first. He set up in a line with devastators in the woods.

I set up with the war walkers behind the woods and both wave serpents at the back, one on the right other on the left. 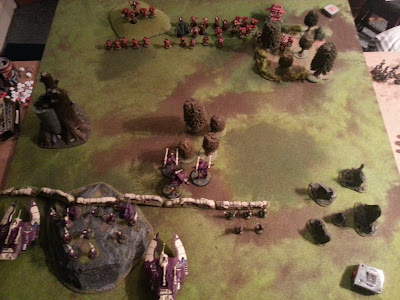 The blood angels blitz forward in a very aggressive mannor.

The tactical lascannon shoot the wave serpent on the right and get a glancing hit, the devastators follow suit and wreck it. Both the honour guard and sternguard shoot at the guardians and kill 4 between them. They hold. 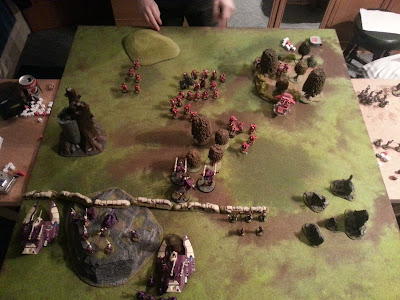 The war walkers move towards the assault marines on the right and the fire dragons move forwards out of the wreck.

Shooting from the war walkers only manages to bring down 3 of the assault marines which is rather poor. The rangers shoot at the same squad and kill 1 and wound the captain. The wave serpent shoot and kills an assault marine. 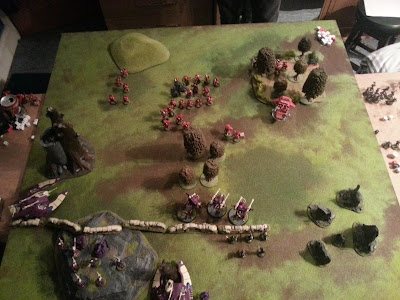 The captain jumps into my lines with his assault marine buddy. The land speeder moves down my right flank.

Firing heavy weapons the devastators shoot at the wave serpent and get 2 glances. The tactical lascannon shoots at the war walkers and explodes a war walker and kills a ranger. The speeder kills 4 fire dragons who go to ground to try and live, it fails and they all die. The honour guard kill 2 guardians and wound the farseer. The sternguard target the rangers with cover ignoring rounds and kill 3 of them.

I move the wave serpent up and it shoots at the tactical marines but fails to do anything.

The army moves up to surround the wave serpent as the speeder goes after the guardians.

The devastators wreck the wave serpent, the speeder kills the fire dragons from the first wrecked wave serpent.

The fire dragons get out of the wreckage and shoot at the honour guard killing 1 of them. The farseer and guardians do nothing.

The guardians die... horribly to the captains power fist.

So that list didn’t work at all. There was some bad play from me with the war walkers, but the list relies to much on the fire dragons doing anything. If they get shot down or can’t get to where they have to go my list fails. So I'm going to jib is and go for a longer ranged list.

Now I know at first glance this isn’t a power house nor is it scary in any way, it just has a fair few strength 6 shots. But I think that’s the beauty of it, with the war walkers shooting from teh back, the vypers moving round  can target what needs to be. The second walker unit will out flank while the falcon does what it needs to. That’s just my thoughts right now.

So what do you guys think?
Posted by Malduran
Labels: Army List, Battle report - 40K, Eldar