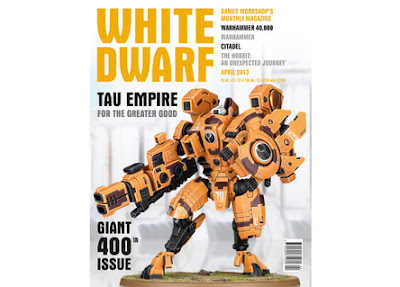 It’s that time of the month again, white dwarf is here. This month its there 400th issue, so as they have told us this, I expect they have something new in store for us to celebrate this rather impressive achievement.


So what do we have in this month’s issue? Well we have the usual suspects in the form of Jeremy Vetock, Jervis Johnson, a battle report and Blanchitsu. New releases for the Tau and some more information than normal. As well as forge world and black library. Nothing really stands out at first glance.

We start with the new Tau release, a new codex to replace the old 4th edition one. I’m happy its tau and they do get some good looking models. The new farsight model is one of my person favourites i must say.  While the new big battle suit is impressive, it comes with an awe inspiring price tag, £50 which was a surprise for me, but no where near as much as a surprise as the broadside. Now they have made the model bigger, yes they have changed its pose (a mistake in my mind, i liked the old shoulder mounted rail gun) but the price tag is ridicules for him. £30!!! For a single model + 2 drones. What the hell is going on here? I am honestly petrified for when eldar come out as i can see any new models i want are going to follow suit with a stupid price tag. Here’s a little comparison for you, for 3 crisis suits it will set you back 45 quid, how is a single broadside 15 pounds less? 2 for 30? Maybe i would let it fly, not 1. Not cool GW, not cool at all. We also get a little blast from the past because i think they get back Aun’Shi, the combat ethereal in the codex. For those of you not around back in 3rd edition it was just him and farsight. From what i remember he was able to reduce hsi attacks to reduce the number of attacks he gets directed at him. While not the best combat character in the game he was amazing for tau and could really be a pain in the ass in the right situations. But i digress, new tau, pretty models, sucky price tags.

The hobbit has a few new releases this month as well, while i don’t play the hobbit the releases seem lack lustre and could easily have been released before hand. Infact we get a new Gollum in his boat, wtf is the point in that? It just seems a waste of resources to me and we get yet another Gandalf and Bilbo model. When lord of the rings first came out i remember that there where about 3 or 4 different versions of the same model. It was pointless and that was just in the fellowship of the ring! Why they do this for the hobbit i don’t know. What would happen if they released 4 different versions of captain bland, Marneus Calgar? Granted he has 2 at the moment but that has a point, he has different armour options. They don’t in the hobbit! Waste of resources.

Lets not get bogged down with my little rant now, and move on to the forge world section. Now every month i have complained that this section was irrelevant at best, but not this month. Oh no, they pulled their thumb out and gave us some exclusive stuff (well models not yet up on the forgeworld sight i mean). The Necron sentry pylon is showcased for us, it’s just a smaller version of the regular pylon but its new, it allows the article to have purpose. Along with it is the front cover for imperial armour 12, the fall of Orpheus. Again something new to validate its existence. I doubt the reason this happened was because some one read my complaints and changed it for me but if you did, thank you and hopefully the rest of the magazine will improve soon.

Black library is much of a muchness as last month, new articles which has already been shown before on other GW sites, pointless yes but we at least get a little more back story on them and why we should buy them. I won’t be but maybe you guys will.

Army of the month is yet another astonishing army. I have not yet been disappointed by this section and i can only hope this carries on in the future. It’s a massive beastmen army painted by a guy called Richard Sherlock. Well done to him as its amazingly painted and converted. The only little niggle with it is that he has converted his own cygore which while is perfectly well done, just doesn’t o it for me. It’s just too small for how i imaged the monster, that’s it. A very nice army.

Johnson bores me with why he thinks we should use games masters in our games, while in theory yes its a great idea, having a little flare to a game and something unknown can be great fun but it’s just not practical for pick up games or if you have a time limit. Granted many of you will have time to organise this and put a lot of though into things like that but most of the people i know don’t have the time, they just get games in when they can due to real life taking priority. It’s a good idea but not practical.

What did surprise me was Vetocks article, it wasn’t... that... bad. While it was more of a humorous jab at all of us with our superstitions with out gaming it genuinely made me laugh and think, yet me to. So he impressed me that he can right things now and then. My personal favourite from his article (which I and my friend john will whole heartedly agree) is that the first time you use a newly painted model it will suck and die in the most painful way possible: FACT. Unfortunately he went a little too far with this and went from general themes we can all agree to into the depths of the personal ones we can’t really relate to. I.E. codex writers can never win with a codex they have written... now how many people can relate to that? And what makes it worse is that the guys that are meant to be able to play and design the rules can’t even do it properly themselves? Then what the hell chance do us lot have? I’m sorry i’m ranting again. Moving on.

Battle report. We see the tau taking on the tyranids in another custom scenario. While they are great i feel they should not have them every month, let’s keep people playing the rule book missions please. Again no point’s values given so for now i have no idea if they sides where fair or not. Maybe the tau where given more points and <SPOILER> that’s why they won? <SPOILER>, nor did they use force org which unbalances the game a bit. While normally i am all for fun games (see my failure against a stormlord) some times they need to have serious ones to show case what the new army can do. It also makes me wonder if they test the new codex properly before release or if they just mess around not regarding the slot each unit goes into as they sure as hell didn’t care this game.

We also get parade ground showing of some monsters, which is nice, another instalment of golden daemon ( i honestly though it ended last month, how disappointed i was) which while nice there is only so much you can see before you get depressed and cry why the young bloods can paint better then you. All the normal stuff is there, nothing majorly great.

So for the 4ooth issue what did we get to celebrate it? Nothing. Nothing at all which irritated me. Honestly if i didn’t write these reviews i wouldn’t bother buying the damn magazine. And don’t get me started on Blanchitsu, that pile of crap has to stop. Its not even bothering to show us what parts they used, just showing the model and expecting us to like it. Well i don’t, i want to see something else, something new and exiting. Hell i will settle for just another marine showcase just stop with this damn article, or at least make it every other month! Please dear god stop.

Well this review was a little more rant based than normal but i feel it’s needed. Maybe next month i will have something more positive to say about this ‘magazine’.
Posted by Malduran
Labels: Article