Hell hath no fury... Space Wolves vs Sisters of Battle 1500 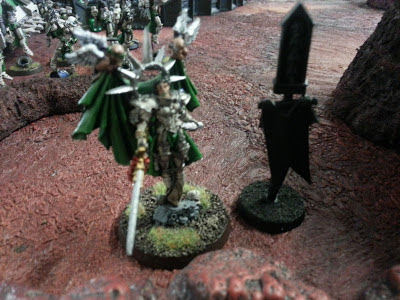 This week i took my space wolves for a walk again (terrible dog pun, they are going to be in this whole report if i can keep them up, just for fun) and i played against the fabled foe, Sisters of Battle. Now i have never played against the sisters before but i have read over their rules, but that’s not quite the same now is it.  Deployment for the game, dawn of war, and the mission is the Relic. Wish me luck.

This list doesn’t appear to have too much scary, apart from the exorcists, and the melta guns could be an issue. Toughness 3 power armour shouldn’t be to worrying but i don’t want to jump to that conclusion as last time i played an army i hadn’t before (Necrons) i got a fair few surprises. So i am going to be careful with everything, and lets see how it goes.

We decided on the table to play on and went for the Mars/red planet table, which i also haven’t played on before, so a whole bunch of new things this time. We didn’t bother rolling for sides, just picked one as it was pretty symmetrical down the middle. The deployment was dawn of war, and the mission was the relic, which was placed into centre of the table. The defence line was then slapped down in the middle of his deployment zone.

Rolling for who sets up first, the space wolves win. I set up the long fangs in a crater for a cover save, the Land raider goes in the middle with both rhinos to its left. The land speeder goes behind the large hill on the right and the dread goes in the middle as well.

I will just let you know now that while the sisters did use acts of faith I don’t know them very well so I haven’t made any record of them.

Well my plan was simple, get close and claw them to death. So with this in mind I go full forward with my rhinos and land raider, all 3 of them pop smoke. The dreadnaught plods along behind them. Moving up the right hand side the land speeder goes forwards and lands on top of the hill in the centre.

Shooting starts with the long fangs targeting the left side exorcist, I get a single penetrating hit though its cover save from the defence line (I didn’t check line of sight before selecting my target, my mistake) and I immobilise the exorcist. The land speeder shoots at the rhino on the right hand side and gets a glance, but the rhino saves with its 6+ invulnerable save (odd sisters rules). 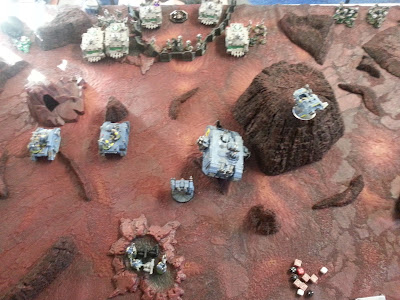 All 3 rhinos go forwards 6 inches. The two on the left turn to have their side armour towards me before the sisters jump out. The flamer sisters jump out and all 3 flamers go to the front. The same happens with the melta sisters on the far left but thanks to difficult terrain, they can’t move far. On the right the sisters do the same, the rhino turns to shield the army, sisters jump out with the melta guns right next to the land raider. The repentia follow the rhino on the right. Celestine and the seraphim go down the left flank. 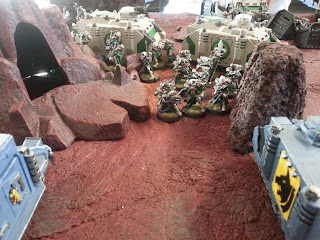 Showing its devastating power, the exorcist on the left shoot at my rhino in the middle and it explodes, killing a space wolf in the process and 2 of the sisters with flamer weapons, leaving the heavy flamer alive. The melta sisters on the left fire at the rhino, combi melta as well, wrecking the tank. All the wolves disembark. After taking casualties from the exploding rhino, the flame sisters shoot at hunters in the newly formed crater, killing 3 space wolves, they fail their moral and run. On the right hand side the melta sisters shoot at the land raider and it explodes, killing 2 dogs and a single sister. Taking a pinning test the hunters including Ragnar Blackmane, fail, just what I need. Showing their fire power, the retributors shoot at the long fangs, including the quad gun, 4 fangs die. 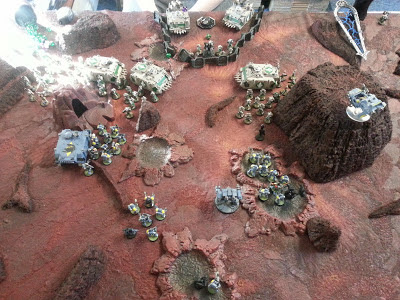 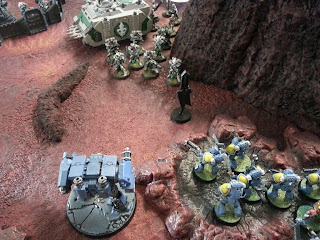 The grey hunters regroup and move back into the fight, attempting to get revenge on the sisters who killed their pack. The dreadnaught follows them forwards. On the left the hunters hold their ground as they can’t assault this turn. Carrying on its path, the speeder moves towards the exorcist.
With only two of their number remaining, the fangs shoot at the immobilised exorcist, finishing the job, wrecking it. The speeder targets the other exorcist hitting it, but it passes its cover save. A combination of bolter fire and the dreadnaught only manages to kill 3 sisters. Not a great turn for me. 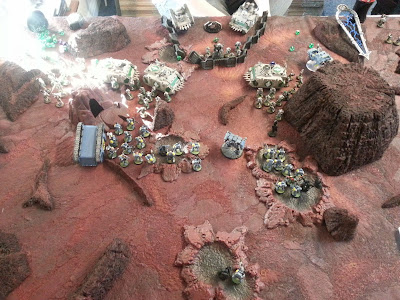 With the space wolves now all on foot Celestine and her seraphim can hunt what they like, and move in front of the hunters on the left. The sisters on the right move back to deal with the land speeder while the repentia go after the hunters in the land raiders ruins. All the over sisters just move to get better line of sight.

Shooting starts with the exorcist targeting the dreadnaught, and it rolls 6 shots, wrecking it. The sisters shoot at the speeder but it jinks out the way not taking any damage. Shooting from the retributors targets Ragnar and friends, killing 3 of the wolves. The sisters in the middle shoot at the depleted squad hiding the cover but I make all the saves. Celestine and the seraphim unleash bolt pistol and flame pistol hell on the hunters far left, 28 flamer hits later and I lose 6 hunters... the pistols kill 3 more pups and only 1 marine stays.

Assault phase and Celestine attempts to charge the lone wolf but fails to get enough range. On the other side of the table the repentia charge into Ragnar and his pack, over watch fails to kill any (don’t know how) and I pass counter attack. He issues a challenge to which Ragnar accepts (should have used the wolf guard) and just about kills the mistress (he passes 3 out of 4 6+ invulnerable saves). The marines reduce the repentia down to 2 models, alas the repentia do exactly the same. The sisters assault the land speeder and krack grenade it to death, it explodes and 1 sister dies in the explosion. 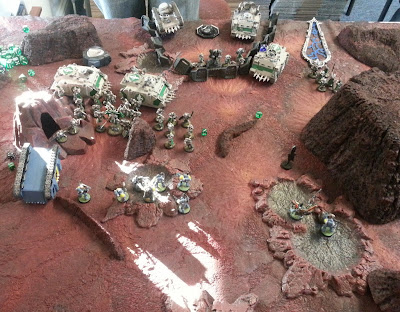 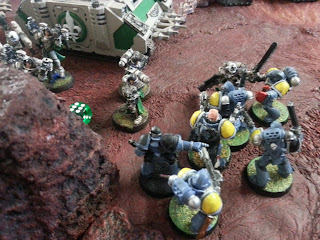 The long fangs shoot at the other exorcist and get a single penetrating hit, immobilising it... damn it.

Both squads attempt to charge, the lone hunter attempts to charge the sisters of battle but gets a krack grenade to the face during overwatch and dies. The hunter squad charge into the flamer sisters and kill 2 of them, but they hold. Ragnar kills 1 more repentia (he is letting me down horribly) but I don’t lose any one. 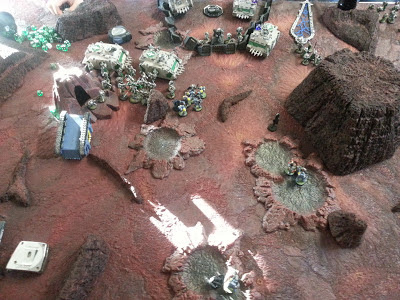 Well its turn 3 and I don’t have much left on the table; I’m not looking forward to this. Celestine and the seraphim move to aid the sisters in combat. The rhino on the right moves forwards to block in Ragnar and his grey hunter friend.

The long fangs die horribly to mass fire from the retributors and exorcist... so many shots, so much death.

Combat phase and Ragnar cuts down the last repentia, finally. Celestine and her girls charge into the hunters killing 2, then I lose 2 more from regular sisters and I fail to kill any. I hold though. 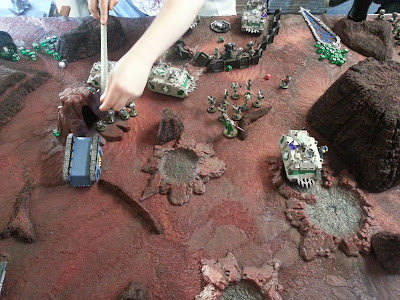 Well I have lost, but let’s go down fighting! Ragnar breaks off from his friend and goes after the sisters of battle while the hunter goes after the rhino.

Assault phase and Ragnar charges into the sisters in front of him issuing a challenge (it makes sense, I want to live till next turn) but he refuses and I kill every other sister. The sister superior runs for it but the big dog cuts her down. The hunter that charged the rhino only shakes it with his love glove, damn. Saint Celestine then kills the other grey hunters and moves towards Ragnar.

The sisters on the left get back into their rhino, the shaken rhino moves off. Celestine breaks off from her girls to go after Ragnar while they hunt down the lone hunter. 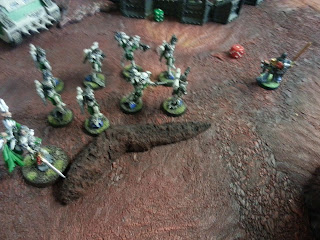 Celestine tries to burn Ragnar but his armour protects him. The seraphim change their mind and pistol the wolf lord dealing 2 wounds to him... typical. His last wound is taken off him by the exorcist hitting him repeatedly with ap 1 missiles. The retributors kill off the lone hunter. I’m tabled. 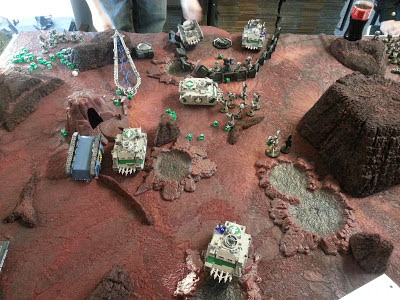 Well then, that was defiantly a learning experience, not just for how to use the space wolves, but for facing the sisters in the future as well. I made a lot of mistakes this game, a lot so I really did deserve this lose. But I always learn more when I lose, which is a good thing I guess. So what did I take away?
·         Death from 1000 cuts: It’s how my opponent described his army and I totally agree. Looking at the army there is nothing which on its own is very scary (bar maybe Celestine) but when it’s combined and gets a good turn of shooting, it can strip away more than it should. So never get in the 12 inch range of the god damn sisters. Didn’t know that, do now.
·         AV 14: His army could only glance the land raider bar a close range melta. Now I should have seen this and held back with it and blown up a rhino or two. Same with the long fangs, I should have gone after the rhinos first and made then gone after the exorcists. With the sisters on foot the land raider could have shot down a fair few and actually let the marines charge out of it. Granted I would have lost the rhinos and dreadnaught to the exorcists, but I did any way.
·         Moving forwards: It normally a good shout going forwards with this list, but actually against this army I might have done better playing the range of the bolters over charging. It’s a rare thing but it might have really helped this game.

Well that’s it for this game, I lost very quickly. But I’m glad I have finally played against the sisters of battle! Before I end it though, a little comment on the space wolves.

This 3rd edition army isn’t doing great, but I am having fun playing around with it. I think I will try another game with it but drop out Ragnar and the Land raider for more troops, if I have more heavy weapons and more packs to answer the howl of battle I might stand more of a chance. But keep watching, it’s been fun playing around with 3rd edition armies. And I never got many puns in, a shame really.