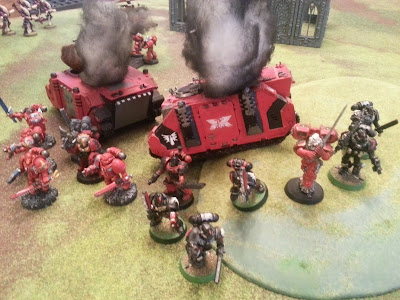 My second game with my new evolving list and its against my old foe the Blood angels. This time he has brought some guard allies to increase him numbers so it could be a harder fight. The mission is the relic, and deployment is hammer and anvil, so i will have less room to maneuver.

A rather unusual army, fully mechanised and with guard allies. I think this is the first time he has ever used a librarian as well as he never used one when eldar had proper runes of warding. He potentially has a lot of mobility to get into combat quickly, and if he gets a charge off I might be in trouble. I will just have to try and stop him first I guess.

Rolling for mission we get The Relic, not my favourite mission but it’s been a while so might as well mix it up. Deployment was Hammer and Anvil, again, I miss just having regular deployment zones. For a chance we have a very open board, just because we haven’t had one in a very long time. IT kind of reminded me of when we first started playing and didn’t have all that much terrain to play with. We roll for deployment zones and my opponent wins, we then roll for first turn and again my opponent wins and elects to go first. He sets up in a very straight forward fashion, with everyone in tanks, in a line, all the rhinos in the middle with a chimera on each flank. The predator hid at the back and the storm troopers deploy in the ruin.

I counter this by setting up both the unit of dark reapers and lance guardians (with both seers) in the woods on my right. The fire prism hides behind the same woods while the war walkers, warp spiders and wave serpent hide on the left behind woods. The rangers are placed in those woods alone, and the final unit of guardians stays in the open as I don’t think they are much of a threat at the moment and might bait him into charging them. The crimson hunter goes into reserve. 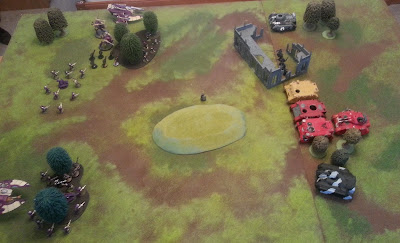 Night Fight: No
Steal the Initiative: No 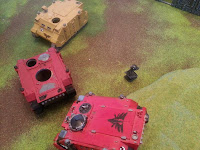 Not much of a difficult decision for my opponent as all his tanks move forwards 12 inches, bar the predator. The storm troopers move up a level in the ruins.

Shooting phase consists of the rhinos and chimera going flat out and blocking the relic with their hulls. That might get irritating. The storm troopers shoot at the wave serpent and get a single glance on the tank. Unleashing all 3 lascannons on the prism, the predator scores 2 penetrating hits, but I make the cover saves given by hiding behind the woods. So glad I placed it there. 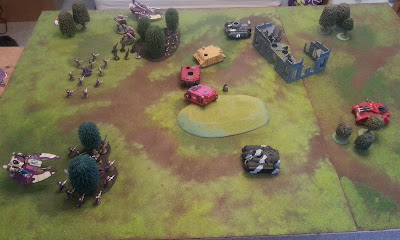 Summoning his power, the spiritseer casts embolden on the guardians, while the farseer casts guide on the fire prism. The war walkers move forwards and the wave serpent moves forwards 6 inches and drops off the wraithguard. For once I just walk forwards with the warp spiders. 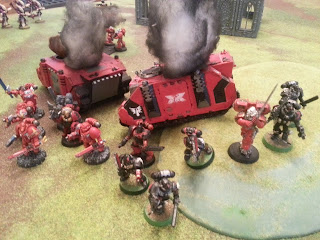 Shooting starts with the blood angel librarian casting shield of sanguineas to protect him and his rhinos within 6 inches. Wraithguard shooting at the chimera next to them, and they all hit and the tank explodes, killing 5 of the penal legion inside. They don’t get pinned though, and pass their moral test. The wave serpent uses its scatter lasers to shoot at the rhino on the left, holding tactical marines. It gets a single penetrating hit and the transport explodes, but all the marines are fine. The tactical marine’s sergeant keeps his cool and orders to marines to combat squad. Unleashing the monofilament shots, the warp spiders shoot at the next rhino in line and I get 2 glances and 2 penetrating hits, but both pens are saved by the shield. The scatter laser of the guardians shoots at the damages rhino and gets a single glancing hit, but it’s saved by the shield. Unleashing the torrent of laser fire, the war walkers target the undamaged rhino and strips off 2 hull points (4 saves prevent it being wrecked). Guided by the powers of the farseer, the fire prism targets the disembarked marines, the shot hits, and kills 3 from the front squad, and a single model from the back half. In a desperate last attempt, the farseer casts eldritch storm targeting the rhino closets to him but placing the template so it still clips the other rhino. I pass the psychic test, and then the blast doesn’t scatter with a lock on. Both rhinos take a glance thanks to the haywire rule and both rhinos are wrecked (failed both saves). That was a lucky turn. The death company and honour guard get out.

Assault phase and the warp spiders jump back. 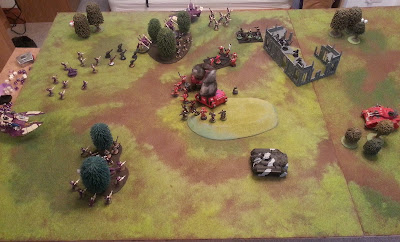 The lone chimera moves forwards towards my guardians, the death company and honour guard move forwards in a rather aggressive manor considering they can’t assault this turn. The penal legion move out of the wreckage of the exploded chimera, as do the tactical marines.

The death company and honour guard both run and spread out to avoid getting shot by the fire prism. Shooting from the hip, the tactical half without plasma, shoot into the wraithguard, but fail to bring down a single wraithguard. The storm troopers show up the marines, shooting at the wraithguard bringing down 4 with a mix of plasma shots and hot shot lasguns. The other half of the tactical squad shoot at the war walkers and manage to explode 1 which kills a ranger in the process. Aiming all three lascannons at the fire prism, the predator hits and penetrates the armour 3 times... or so it thinks, but the tank is fine thanks to its holofield. 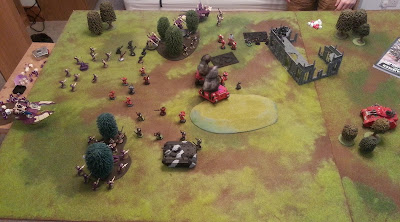 The crimson hunter fails to arrive from reserve. Once again the spirit seer casts embolden on the guardians, the farseer casts guide on them. In a bold move the guardians lead by the twin seers moves out of cover towards the death company while the other guardian squad, flanked by spiders moves towards the librarian. Moving away from the tactical marines and out of the woods the war walkers back off. 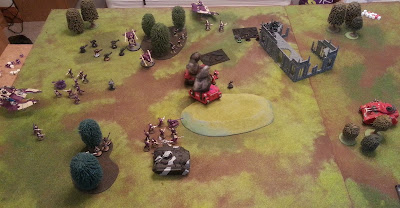 The tactical marines move over and pick up the relic, while the penal legion goes after the wraithguard. Jumping out of the chimera, the veterans go after the guardians.

Throwing their demo charge at the guardians in the open, the template is placed to hit every model but I get very lucky and he scatter 6 inches and totally misses the squad. The rest of the squad however are more effective, and 2 guardians die and the spiritseer takes a wound. The chimera targets the dark reapers and kills 2 of the aspect warriors. Shooting from the tactical marines not on the relic kills 2 rangers. My luck is used up as the predator targets the fire prism and It explodes. The storm troopers target the wave serpent and the plasma guns manage to get a single glancing hit. Summoning his powers, the librarian’s casts fear the darkness on the warp spiders who fail their leadership test and run, the rangers also run from casualties inflicted before.

Shooting from the hunter blows a lascannon off the predator. The wave serpent shoots at the tactical marines and kills them off, leaving the relic in the open. The dark reapers shoot at the chimera and it explodes, killing 5 of the veterans in the explosion. Shooting from the war walkers targets the remaining veterans and kills them all. Again casting eldritch storm, the farseer manages to glance the predator.

Assault phase and the warp spiders fail to harm the librarian and he fails to kill any of them. Drawn combat. 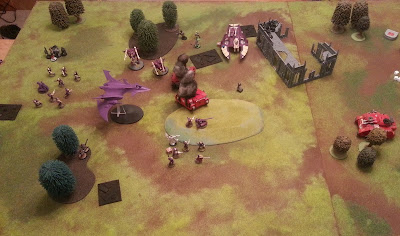 Backing off from the eldar, the predator moves back. The penal legion goes after the war walkers.

Again shooting from the storm troopers is effective and they again glance the wave serpent. Aiming into the sky the predator hits the crimson hunter twice, I chose to evade and only takes a single glance.

Assault phase and the penal legion charge into the war walkers, I over watch and kill them all bar the lord commissar with them. They then fail the distance with a double 1. The librarian kills off 2 more warp spiders but they hold their ground. 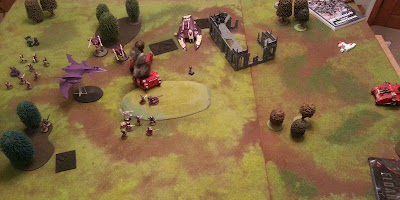 A short turn as the crimson hunter moves forwards and wrecks the predator. The wave serpent spins around to look at the storm troopers and uses its shield as well to kill them all. Overkill in the form of the war walkers, all shooting at the lord commissar, killing him many times over. The guardians go after the relic.

Assault phase and the combat is a draw with nothing happening again. 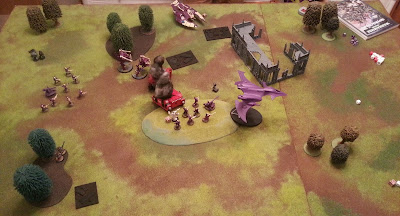 Nothing happens in combat as the librarian fails to hit anything and the warp spiders can’t get past the librarians armour. 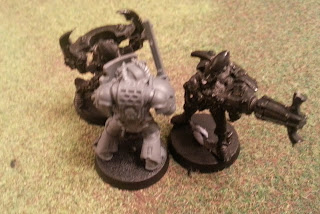 The crimson hunter starts to turn while the guardians pick up the relic.

Combat again is a draw with nothing happened. 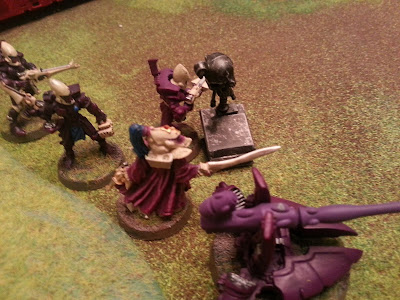 For the hell of it we go into turn 6 to try and finish the combat...

Finally the librarian manages to kill off the warp spiders, but unfortunately for him he is now in the open.

The dark reapers shoot at the librarian and kill him with starshots.

The blood angels are tabled and the eldar win. 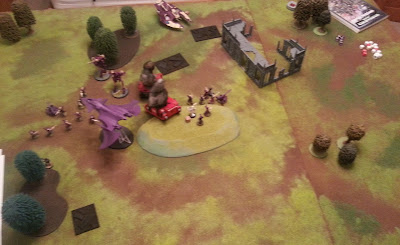 That was defiantly different; I learnt a few things and used a psychic power I haven’t used in a very long time. Shame I didn’t get to use mind war, but never mind. My list did very well at opening up the transports early on which was probably key as if he got to focus his units in one section my army probably would have slowly folded. Anyway what about my units?
·         Twin Seers: Having both a farseer and a spiritseer in a single unit defiantly works well, having access to both fate and battle makes it a very useful squad. Defiantly have to keep doing this. Maybe having a 20 man unit might be better? Or maybe a squad of dire avengers? I should try it out.
·         War walkers: They didn’t do as much damage this game as they normally do but still not bad. They are still a good unit to add to any eldar army/
·         Rangers: they are cheap but they didn’t really do much this game, maybe I could use their points somewhere else.