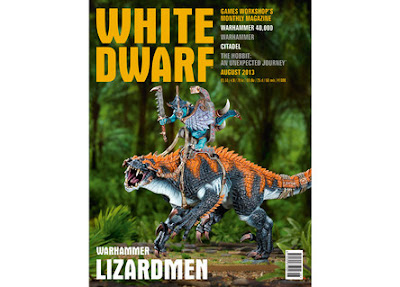 Another month, another white dwarf, and this month it’s the lizards from Lustria getting a new army book. I have always liked lizardmen, in fact in 6th edition I had a small (about 500 points) army of them using the old 5th edition models with the ravaging hordes rules... them were the days. It was fun and since I have had an interest in them. So this month had potential to entertain me.


While this is a review, its going to be a little different this month as I'm tired of saying them same thing over and over so I will skimp on some detail and elaborate on a few others. Anyway the new stuff, a heap load of Lizardmen models. I guess the big release is the Carnosaur/Troglodon/Kroq-Gar kit. For £50 you get a choice of monster and in the case of the Carnosaur a choice of rider. From what I have gathered the new beastie is a rare choice and can spit poison, apart from that I have no idea what it does. From the look of the kit I get the feeling it was designed to be the Troglodon and the Carnosaur was just bolted on, I’m probably wrong but its just how it looks to me. The Troglodon looks like a good model, it all looks in proportion, but the Carnasaur doesn’t quite look right to me. Its head is small, a lot smaller than the last model which was a kay feature I feel of the old model. It just looks like a bigger cold one which I feel doesn’t do the monster justice. Just my thoughts, you probably disagree but there we go.

Another big monster is the Bastiladon, this monsters selling point is that its highly armoured and hard to kill with a big weapon on its back, its a good job the lizardmen didn’t already have a monster to fit that role, otherwise the older model might feel a little shafted. Stegadon you say? No that’s totally different with its large armoured crest, think hide and bolt thrower/engine of the gods... oh yer... that. I hope the stegadon has been changed to be something unique rather than just an old model they don’t care about selling any more. I hate it when old models get demoted because of some new tart that comes onto the scene.

Terradons get a duel kit now with something called Ripperdactyl’s and the two are apparently different. Terradons no longer drop rocks, they drop bombs on the enemy (WTF?) and are a harassment unit which they always were, the new boys appear to be the combat guys, but how scary can they be with skinks on their back? The kit lets you make a special character as well or a hero on one of the flying dinos. I have mixed feelings on this, I don’t know if it’s good or bad, as I assume the units are a min of 3, so to use both a unit and one of the characters you need at least 2 boxs... its good as its lets you get more diversity but I feel having a separate box for the heros might have been better? I don’t know, if any of you have bought some of these guys let me know your thoughts, as I’m perplexed.

Teto’eko, now this guy angers me. I don’t care how powerful a skink gets, he doesn’t deserve to be  a fucking slaan! Get off that palanquin and walk.  I am all for a skink special character but not this way, not by pretending to be a slaan.  The palanquins are meant to be sacred relics just for the big frogs, this guys doesn’t deserve one. No, not happy.

No new 40k but a single model release for the hobbit... yet another Bilbo variant. What’s the point? I feel GW regret getting the rights to LOTR and now they are just doing it because they are contractually forced to, no heart or soul goes into it any more.

Digital products is an interesting read this month as not only has a new space hulk game been developed for PC, Mac and iPad. The graphics don’t looks great but the game of space hulk is fun as as long as its cheap I can see it making a little money. Black legion are getting a supplement. Now while I though the basic codex for chaos space marines was practically black legion, apparently I was wrong. They will be getting expanded back ground (I loved the iyanden fluff so hopefully this will be just as good) and new rules to show how they are different... not 100% how they will happen but we can wait and see. We probably won’t see a physical copy for a month or 2 though.

Army of the month this month is by Jamie Farquhar, and it’s a rather impressive Iron warrior’s army. Many tanks, many infantry, and even a few daemon engines. It looks good but I have one tiny comment on it, you need to be less liberal with hazard stripes when it’s a key element of your paint scheme. Having it on every bolter, power fist, loin cloth , face, shoulder pad and backpack is a little much in my opinion and it takes away from the look over all. I have never painted a force of iron warriors myself so my opinion isn’t worth much, but when using something as obvious as hazard stripes they need to be put on key areas and only stuck to them. Having them everywhere isn’t good. The redeeming factor on this guys army is that its so wide spread that its uniform. HE does have some cool conversions though.

Battle report is a clash between Lizardmen and Tomb Kings, it doesn’t say the points but I'm guessing around 3000 points, I can’t help but feel that by not showing off the points they could be stacking the new armys points up a little, by giving them an extra 100 or so points. But that’s just a crazy theory... isn’t it? I was bloody amazed when I read that the mission... was from the book. A straight up fantasy mission, no crazy ass scenario, no made up rules, just straight. It blew me away. Spoiler alert, the lizardmen smashed the tomb kings to bits, but I was glad to see the necrosphinx killed off some lizardmen monsters instead of just having the new stuff trample over everything. The battle report was ok, a little longer than normal which surprised me. I don’t get why there is such a variance in the number of pages given to each months battle report.

We get battleground back again and this time its a hive city, the table is impressive but it’s not quite the same as all the others. The others have theoretically been possible to copy or at least take aspect from, this one, the cost in making it would be astronomical. The sheer cost of buildings and forgeworld bits to make even a single building it large. Its good to see what they can do every now and then  but this is just a little soul destroying as I can’t ever afford to do that. I really wish I could, but it’s not going to happen.

The rest of the magazine is the same as always, I don’t need to say any more. Again this month is the same as every other. I don’t think I will buy next months, the only issue is what can I replace it with? So I ask all of you, should I carry on with the white dwarf reviews each month or should I try something different? Comments on what I should do would be greatly appreciated.

A parting though, how long will it take for the lizardmen to get a flyer called swoop or a stegadon called slag? Or rather in true lizardmen style Sw-upe and Sl-aaag.