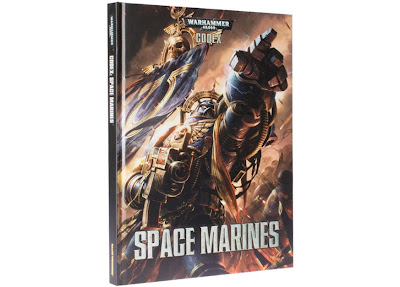 With the big book of marines now out I thought I would share my observations of it with anyone who cared to listen, encase some of you haven’t bought t yet and are still interested in its contents. I will just be going over some of the broader things in the book and the new units, so it’s more of a brief overview.

First of all, it’s a BIG book, biggest codex they have made yet and it’s quite surprising. They haven’t gone into vast amounts of detail on each chapter but they have enough to get you though, after all that’s what all the supplements will do in the future so it’s forgivable. After all if they gave every chapter in the book the ultramarine treatment then the book would be rule book size. Now the book has been split up into the different chapters and so have the rules. This was a surprise for me as in the past they have always let you use whatever special character you have liked with your chapter allowing you to field, say, an ultramarine bike force (using Khan) to show what they may do in the need arose for a fast response unit. It’s a bad example but you get what I mean. In this new book you pick your chapter, the chapter it originated from and your locked into those rules and special character’s only. Now you can get around this a little with the allies rule inside the book itself allowing you to ally with another chapter, but many of the special characters rules are chapter specific, so never mind that then. Now while I’m not sure it was the best idea doing this (and I must say I’m a little disappointed the Black Templars got steamrollered into the codex) but I’m glad they have not done it half heartedly and jumped in with both feat making you decide. Anyway, onto the rules.

The new boys, the Centurions, are an interesting two units, both are very expensive with 2 wounds and a 2+ save and toughness 5. Very durable but no invulnerable save meaning that ap 2 will still shred them like no one’s business. Being allowed to shoot 2 weapons and being slow and purposeful makes them very good at shooting. But I must say the only was I see them being useful is with the Grav-Cannon and Missiles as it gives them a lot of shots that can murder marines and still take on tanks thanks to the grav amp.  The assault variants are ok, but they are always going to be limited with their focus on close combat and being slow and purposeful, so no running.

Before I go on I would like to mention Grav-weapons. I was very surprised they are salvo weapons, with the grav-gun being salvo 2/3 and the cannon being 3/5. The range of the two aren’t great 18/24 respectively which makes the gun quite balanced, but the fact the grav-cannon only can be used by the centurions (as far as I can tell) it will always be 24 inch range thanks to relentless (begs the questions why they bothered making it salvo) which means a min squad of 3 will have 15 shots, re-rolling to wound which will just about kill and MEQ or TEQ you care to mention bar maybe paladins. Yes it’s expensive, but damn is it powerful, also concussive for fun, why not?

The other new toys for the marines to play with are the anti-air tanks, the hunter and stalker. Now these tanks are both very cheap, under 80 points cheap which honestly made me a little concerned. The hunter, the cheaper of the two has a big missile launcher which has both armour bane and ap 2, so its going to penetrate and you’re going to feel it. It’s going to rape a flyer. And if it misses, well then you put a counter on the flyer to see if the missile is smart enough to shoot the flyer in ass next turn. Its very powerful. The stalker has a icarus stormcannon array, a weapon which can either be fired at full BS twin-linked at a single flyer or a BS 2 at two flyers (not twin-linked) so it makes it a little harder to take down two a turn. Now while this will not bother the heldrakes, storm ravens or valkaries, it will murder orks and eldar flyers. Now I want to call both of these tanks over powered for their points, and I have every right to BUT they don’t have intercept, and with armour 12 in theory it should get destroyed they the very craft it was sent to destroy. And if you buy one of these and you opponent doesn’t have a flyer, well you have wasted the points as the tanks, especially the hunter are going to have a hard time taking down ground targets. I will wait till I have faced these tanks on the table before saying anything else, but the sky isn’t falling like I may have suggested in my white dwarf review.

Over all the codex is much the same as it always has been, sturdy marines and a few tricks up their sleeves, especially now with chapter tactics, but I don’t see them running any ones day. Will they be the new top dog? No I don’t think so, Tau will still have that role for now, but they will at least be a contender instead of being just another 5th edition book.

As a side note while all the chapters have their own little thing they do I can’t help but feel that the Iron hands could potentially be one of the scariest, I know some people are claiming that the white scars will be (granted +1 jink save and hit and run are good) doing a similar bike themed army with iron hands could be devastating, especially with two HQ choices and Land raiders. It will not die on characters and tanks could make for a scary army, especially when those tanks are land raiders. Just saying...