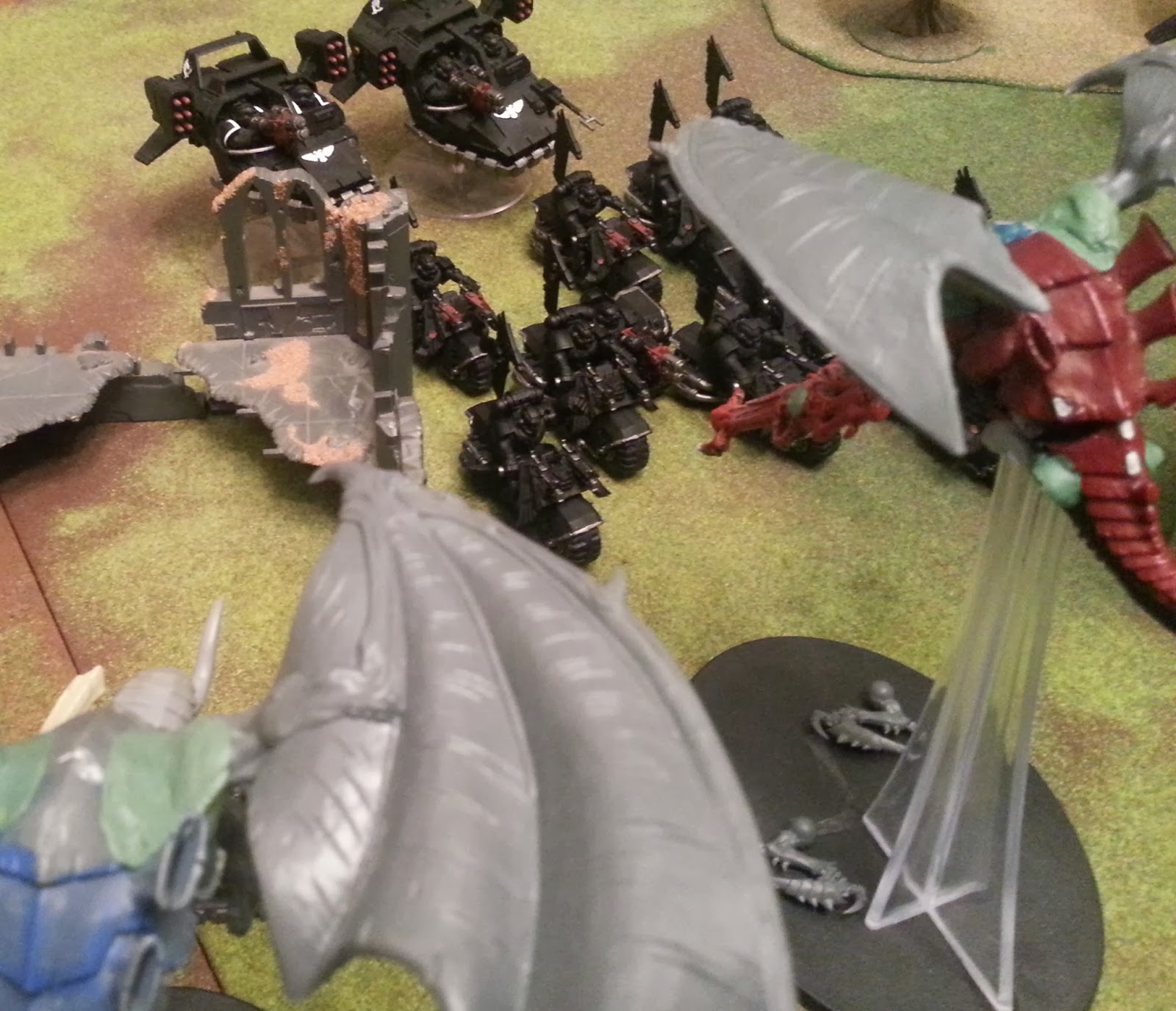 Tyranids
I use a more speed and combat orientated tyranid force, 1498

My list has 3 flying monstrous creatures, which should be able to take on marines with relative ease, provided they don’t get grounded and shot by heavy weapons. The venomthropes will hopefully keep the little bugs alive long enough to make combat.

That’s a lot of high strength shots which will ignore my armour. I could be in a lot of trouble for me.

Rolling for mission we get Emperors will, so a single objective each and deployment type was dawn of war. The tyranids win the roll for deployment zone and I picked the one with the most area terrain on it. We place our objectives next, I place mine at the edge of the woods in the middle of my deployment zone. He places his objective in his woods.

Deployment and first turn, the tyranids win the roll and set up first. I place both harpies behind the woods, with the hive tyrant and guard in the middle of the table. Both units of hormagaunts go on each side of the tyrant, and the termagants deploy behind the harpies holding the objective. The flyrant goes on the right hand flank ready to fly up it. Both venomthropes go in the centre to give shroud around the table. I place the genestealers in reserve ready to outflank, and using hive commander I outflank the tervigon, let’s hope that he can spawn some more troops around him on which ever flank he appears on.

To counter deploy the dark angels place two units of bikes in the centre with two units of speeders behind them. Another unit of bikes goes on each flank, and the final unit of speeders goes on the right hand side ready to attack the flyrant. And to finish off he places Sammeal on the left. 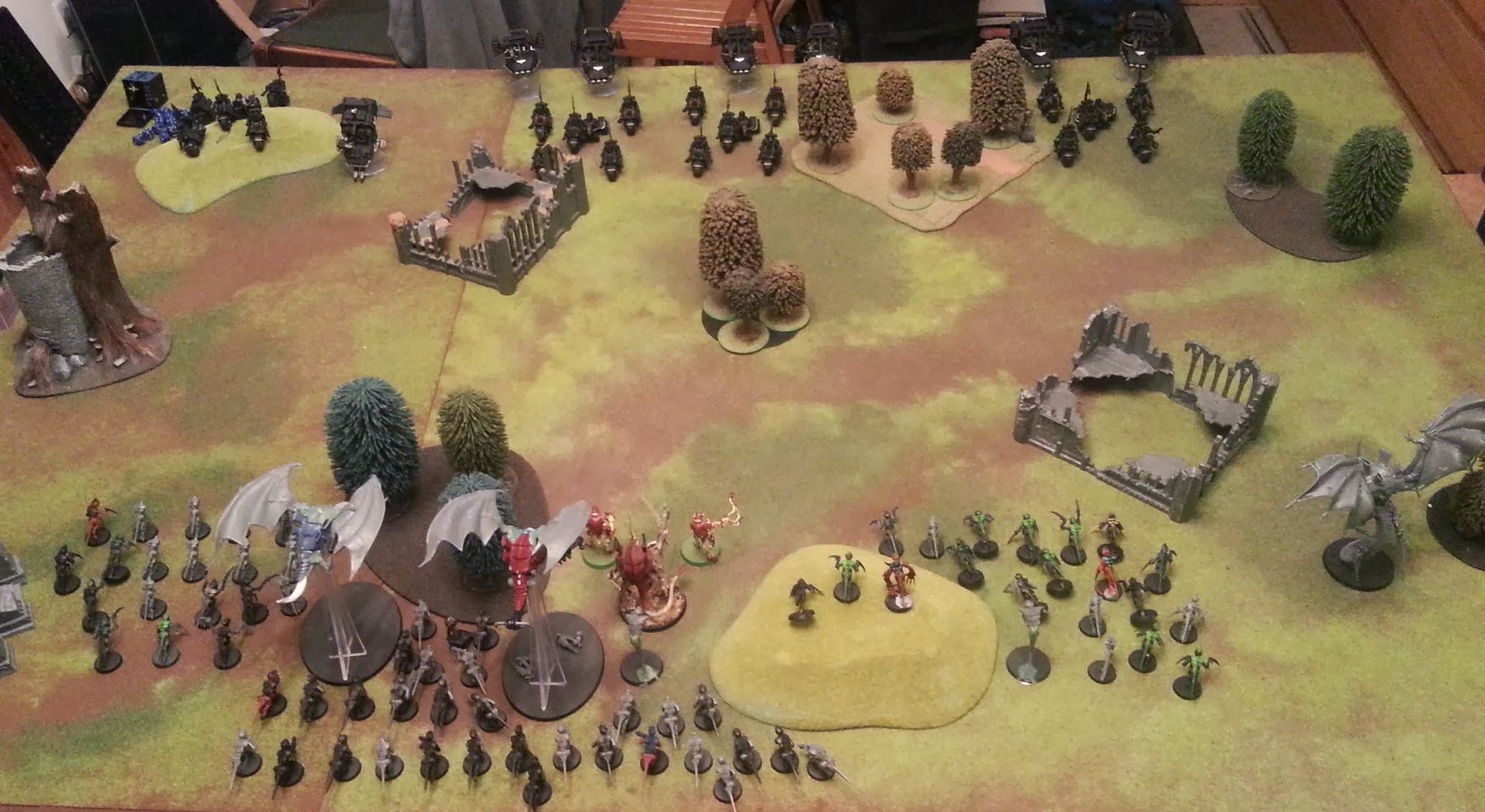 Across the table the bikes move up, just getting into range with their guns of the monstrous creatures. The speeders do the same making sure the multi-melta is in range, he moves everyone to make sure he can alpha strike the flyrant and attempt to kill the hive tyrant as well.

Shooting starts with the speeder squadron on the right shooting everything at the flyrant, 4 krack missiles and 2 multi-melta shots later and the flying hive tyrant dies even with the 6+ cover save from night fight. First blood (and a major blow) to the dark angels. The two bike squads in the centre of the table shoot at the hive tyrant and bodyguard, plasma shots, bolter rounds and a single multi-melta shots fly out into the darkness and each squad deals a single wound to the closest tyrant guard, they survive thanks to the 4+ cover save granted by night fight and the venomthrope. The land speeders in the centre only manage to kill off a single tyrant guard thanks to the cover save! Sammael targets the tyrant as well, and manages to get enough rends and I fail enough saves for him to kill off the last tyrant guard and wound the hive tyrant TWICE! The bikes on the left shoot at the left harpy and deals 4 wounds to it! Leaving it on one, not great. That was a devastating turn. 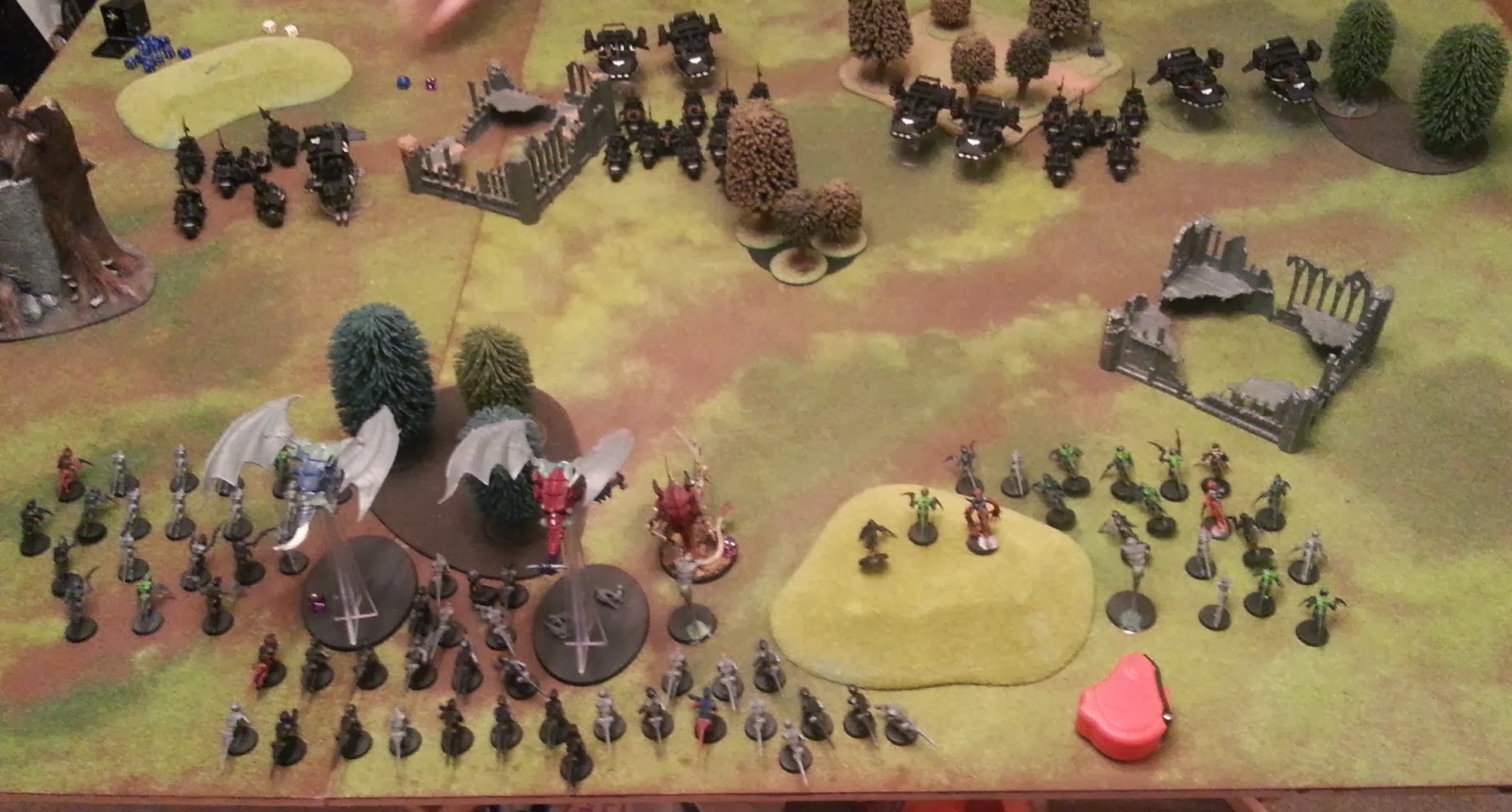 Starting the turn the hive tyrant casts dominion and catalyst on the harpy with full wounds (and himself). The harpies takes to the sky and fly straight for centre bikes, the rest of the swarm does the same, but the termagants hold my objective.

A high shriek pierces the battle field as the heavy venom cannons target a squadron of land speeders. The first shot scatters off, the second penetrates its armour and destroys a speeders multi-melta. The rest of the swarm runs forwards apart from the hormagaunts on the right.

Assault phase and the hormagaunts attempt to charge the bikes on the right, but over watch kills the front 6! That makes it a rather large charge distance and they fail. 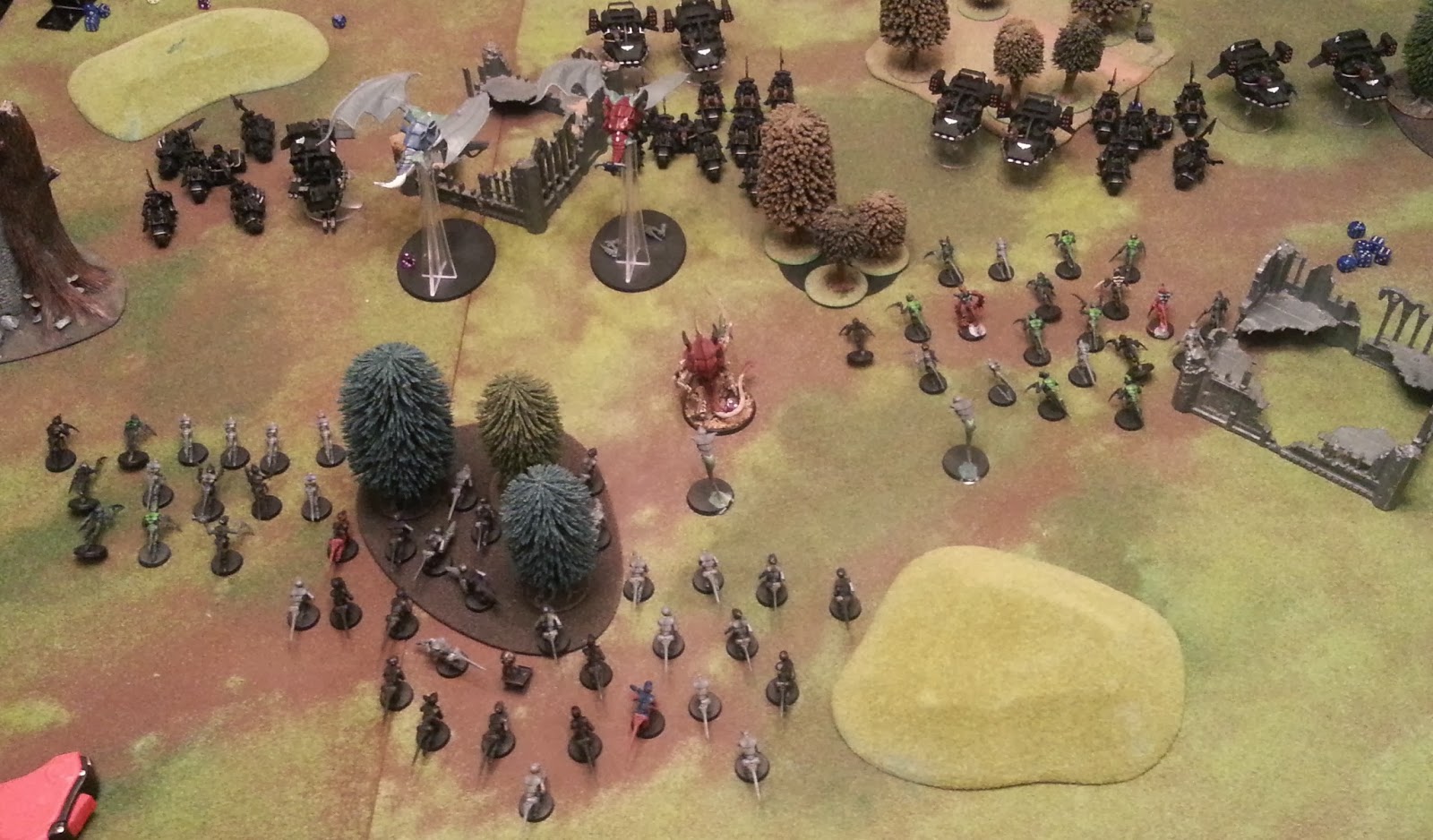 The bikes surround the swarm, but the ones in the centre back away from the harpies.

Shooting from the left bikes onto the wounded harpy get a single wound, puncturing the monster, killing it. A unit of bikes in the centre shoot at the hive tyrant and kill it in a single volley with plasma fire, and the second centre unit targets the healthy harpy but fails to even hit it and a plasma gun even over heats and kills its owner! A centre unit of speeders targets the harpy and gets a single hit, which fails to wound and he stays in the air. The second speeder unit targets the harpy and hits with a single shot, but again fails to wound him, but he does fall out the sky and hit the floor, but feel no pain ignores it. The right unit of bikes targets the right hormagaunts, and another 6 die. The right speeders frag them and get 12 hits! But thanks to the venomthrope, only 3 die. On the left Sammael shoots at the left hormagaunts and kills 5, they fail their moral test and run 7 off the inches just staying on the table.

Instinctive behaviour first, as I have no more synapse. The hormagaunts on the right fail and roll a 6, they have to charge and have rage! Both venomthropes fails and can’t do anything unless in cover. The termagants pass though somehow as do the harpy. I roll for reserves and the genestealers appear, and arrive on the right flank behind some trees. The tervigon appears as well but on the left side of the board behind a unit of bikes. I attempt to rally the hormagaunts but they fail and run off the table. Both the harpy and hormagaunts move to the centre bike unit, ready to charge them. To finish the movement phase the tervigon spawns 11 termagants and doesn’t roll a double. 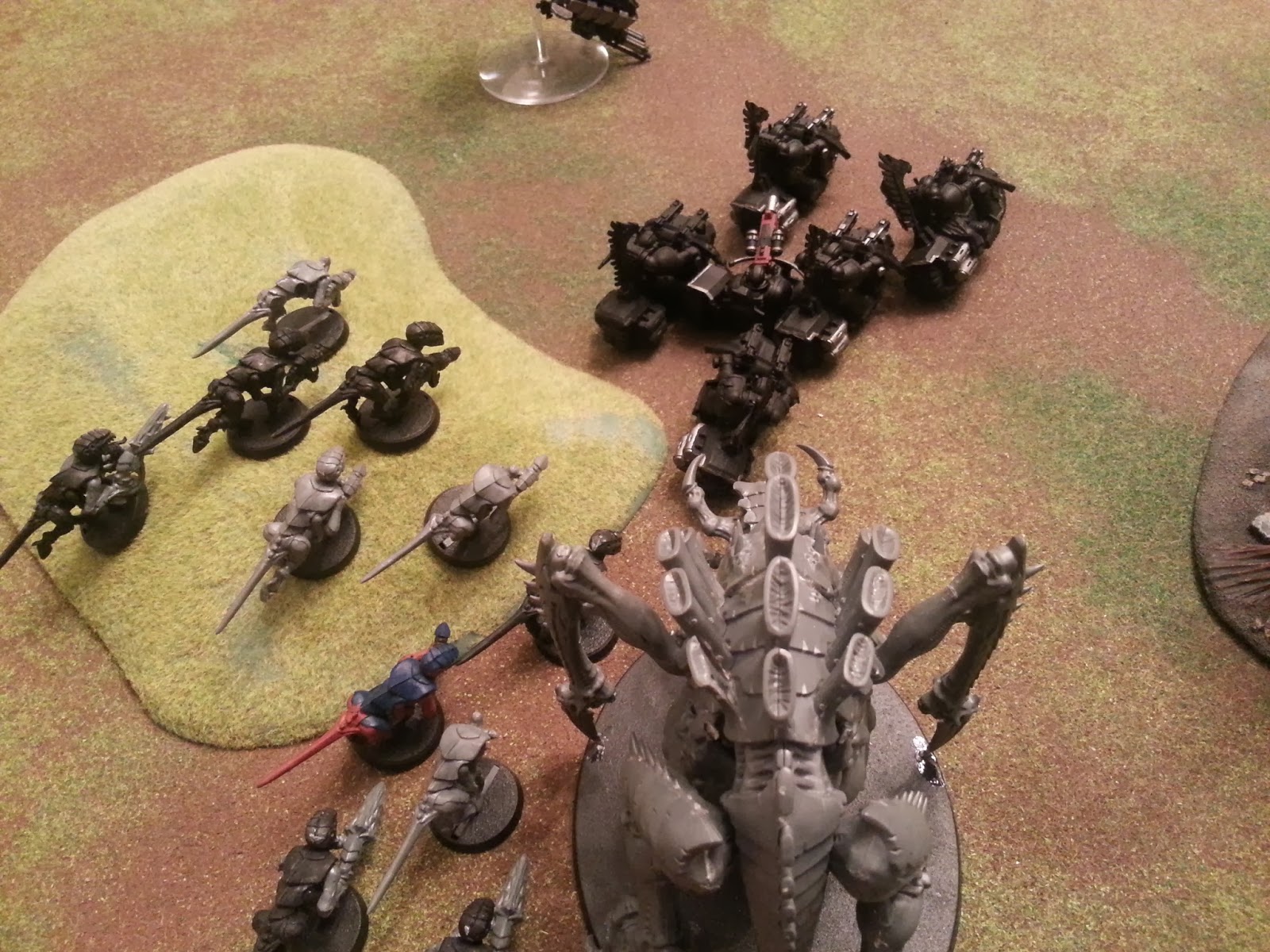 A new unit on the table can be a great advantage, and they prove it and shoot at the bikes closest to them an actually kill 2! The tervigon attempts to kill some but fails to get past their armour. Moral test, and they fail and run off the table, well that was a stop of luck. The harpies kill 1 biker in the centre unit, ready to charge them.

Assault and both the harpy and hormagaunts charge into the centre bikes, 2 hormagaunts die to over watch but still make it in. striking first the harpy fails to do much and only kills a single marine, the gaunts fair better wounding 3 times but fail to get past their armour. The marines are just as bad, fails to wound at all but hold their ground. The combat continues. 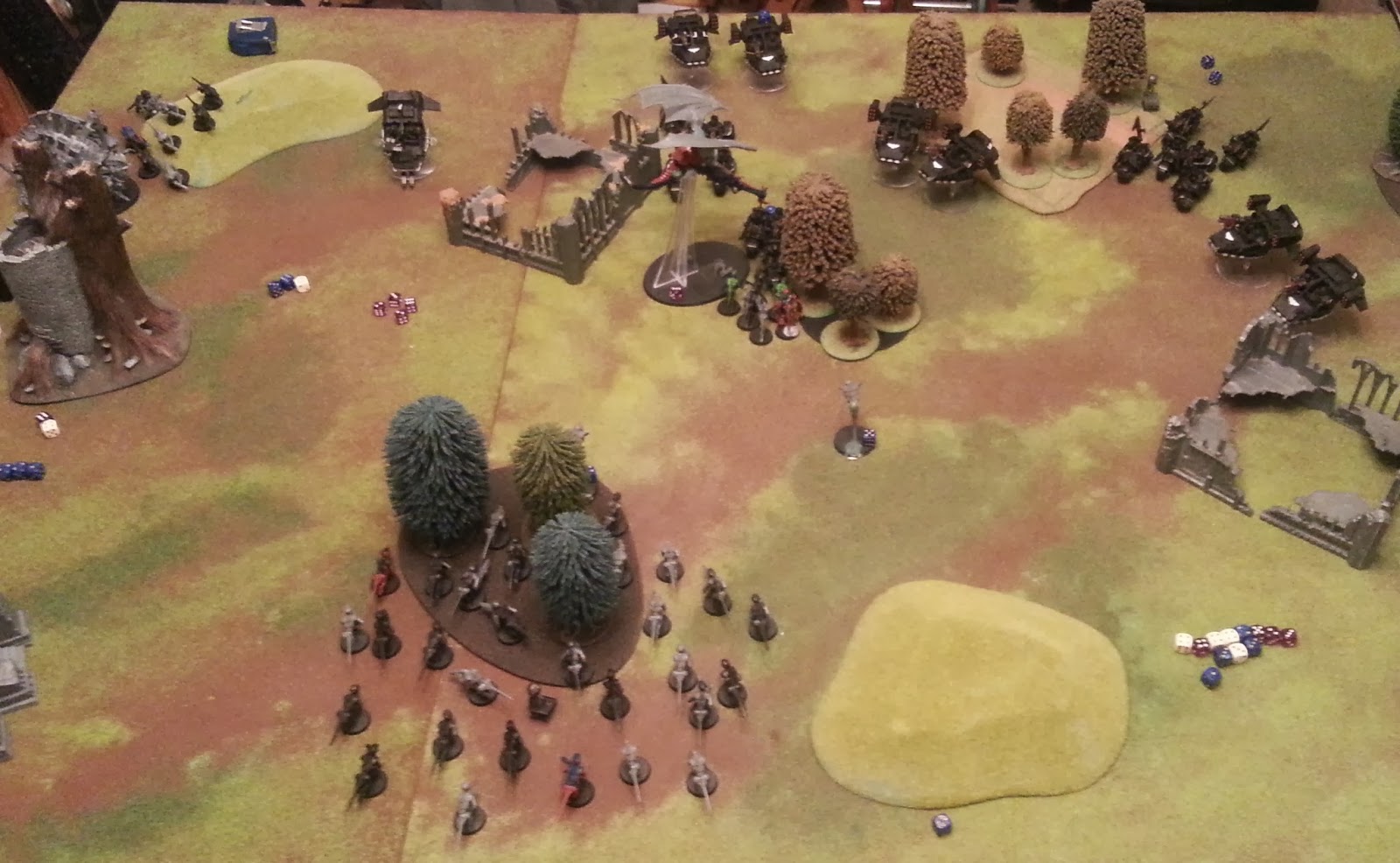 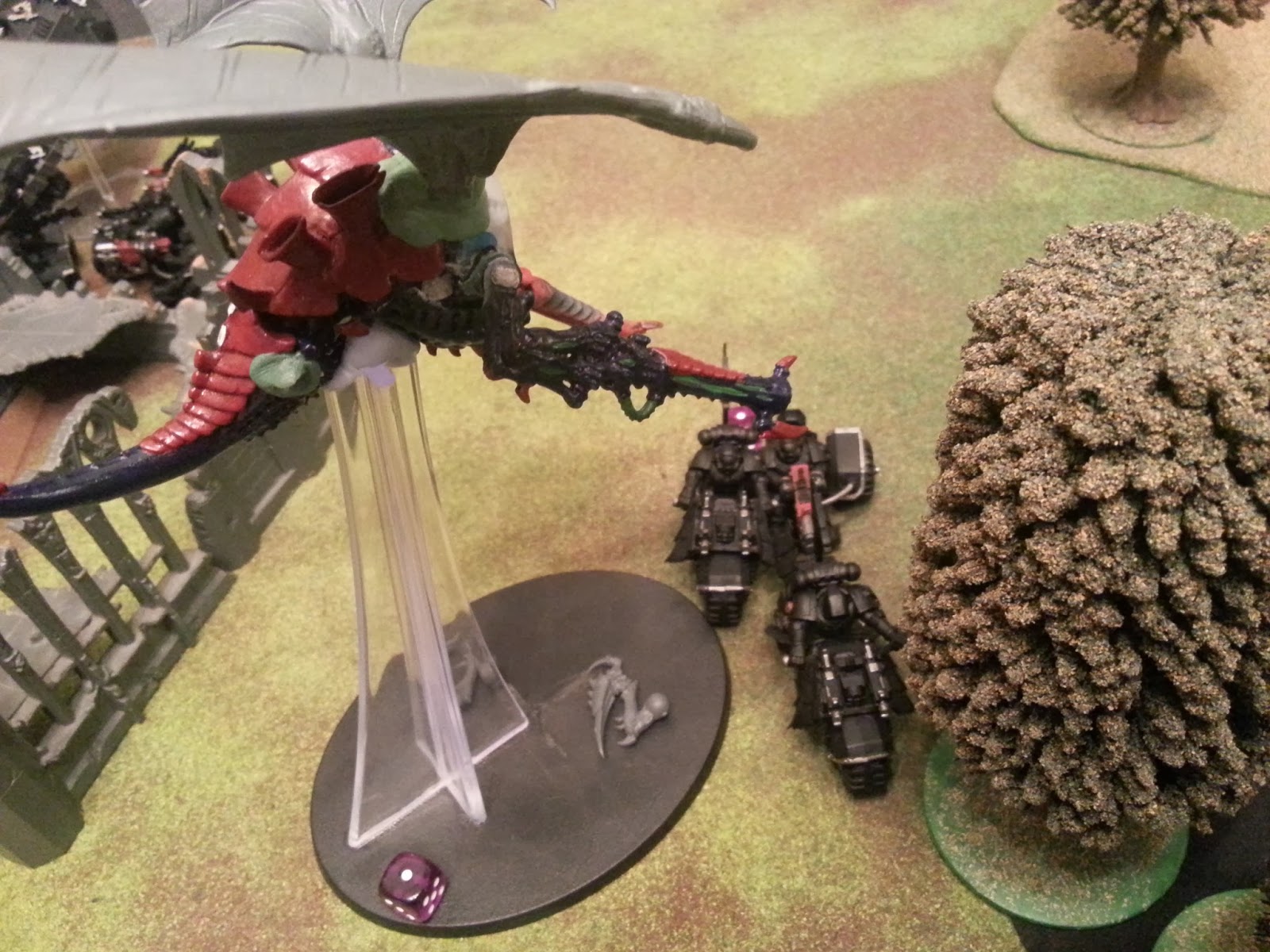 Rapid firing their bolters, the bikes on the right shoot the genestealers and kill 4 of them even after they go to ground, they hold though. Combining their fire power the speeders manage to deal 2 wounds to the tervigon, shortly followed by Sammael dealing another 2. The monster is then killed by a bike unit. In the synaptic backlash, 6 termagants die. On the right the speeders krack the venomthrope in the open and kill it very easily. The final speeder squad targets the termagants with frag rounds and kills 6 of them, but they go to ground at least preventing more damage.

In combat the harpy fails to do anything, as do the hormagaunts. The marines kill 1 gaunt and win combat, panicking the gaunts and making them run. 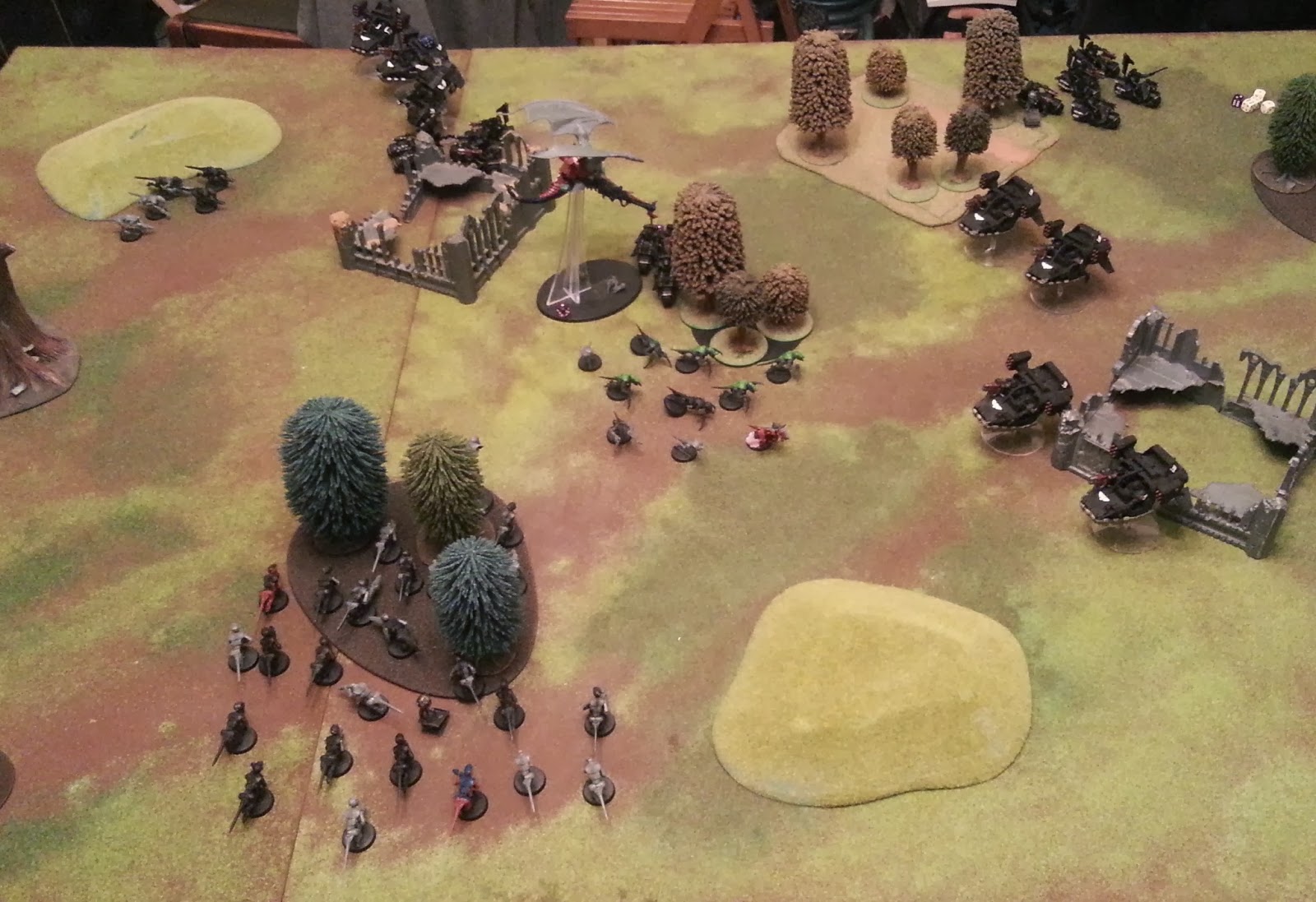 The only instinctive behaviour test I have is the few termagants that spawned, they fail and can’t shoot unless in cover. I attempt to rally the hormagaunts and roll insane heroism rallying them.

Straight to combat, and the harpy again fails to hit... getting frustrating now. A melta bomb to the face wounds the harpy. 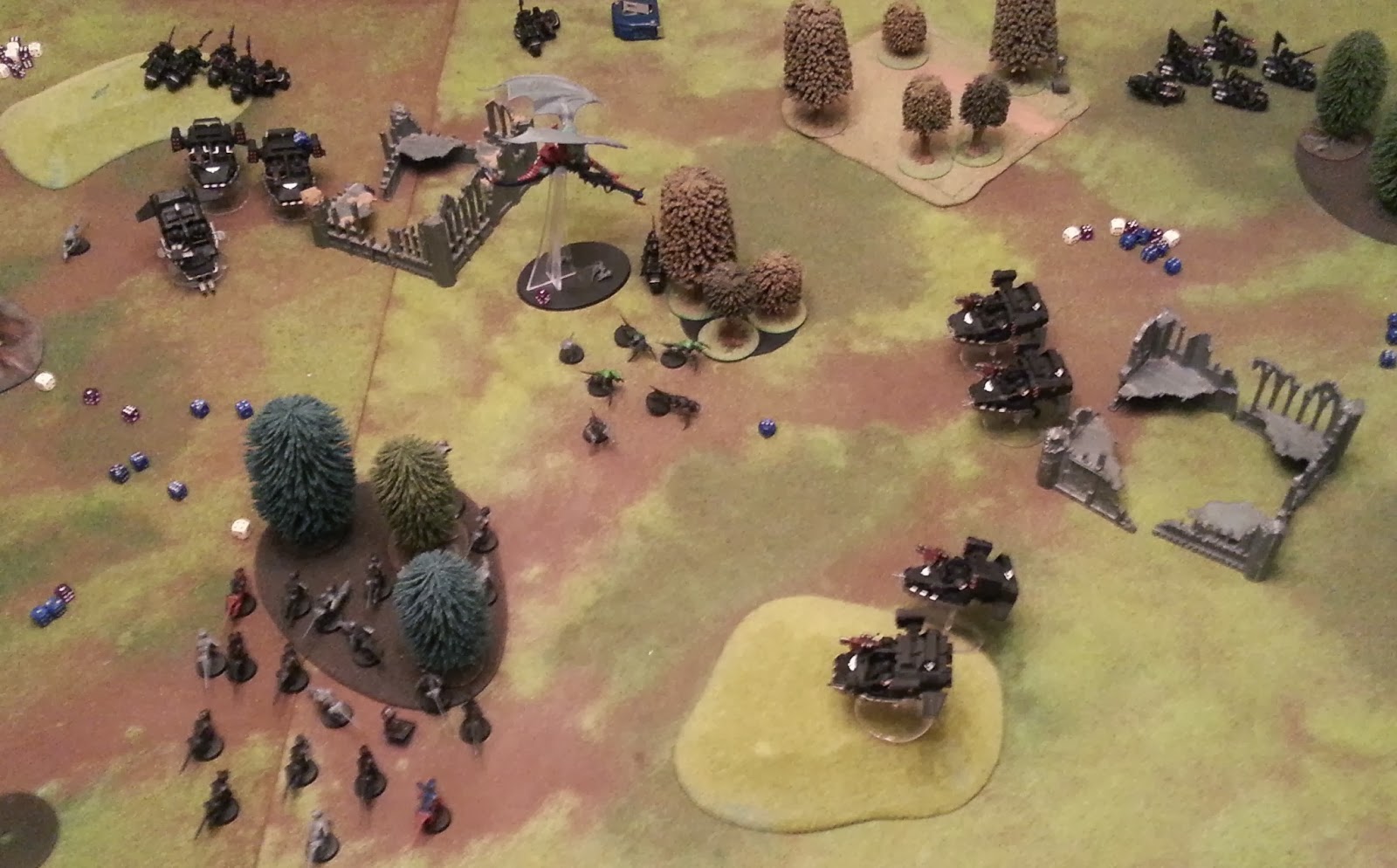 The bikes on the right face the termagants to deal with them, the speeders move to frag the large unit of termagants.

Assault and the harpy kills the attack bike! But the last marine holds.

The lone gaunt carries on running, while everyone else has gone to ground so immune to instinctive behaviour.

A single snap shot from the running gaunt targets a speeder, it gets a glancing hit but jinks out the way.

Combat and finally the harpy wins combat and kills him! 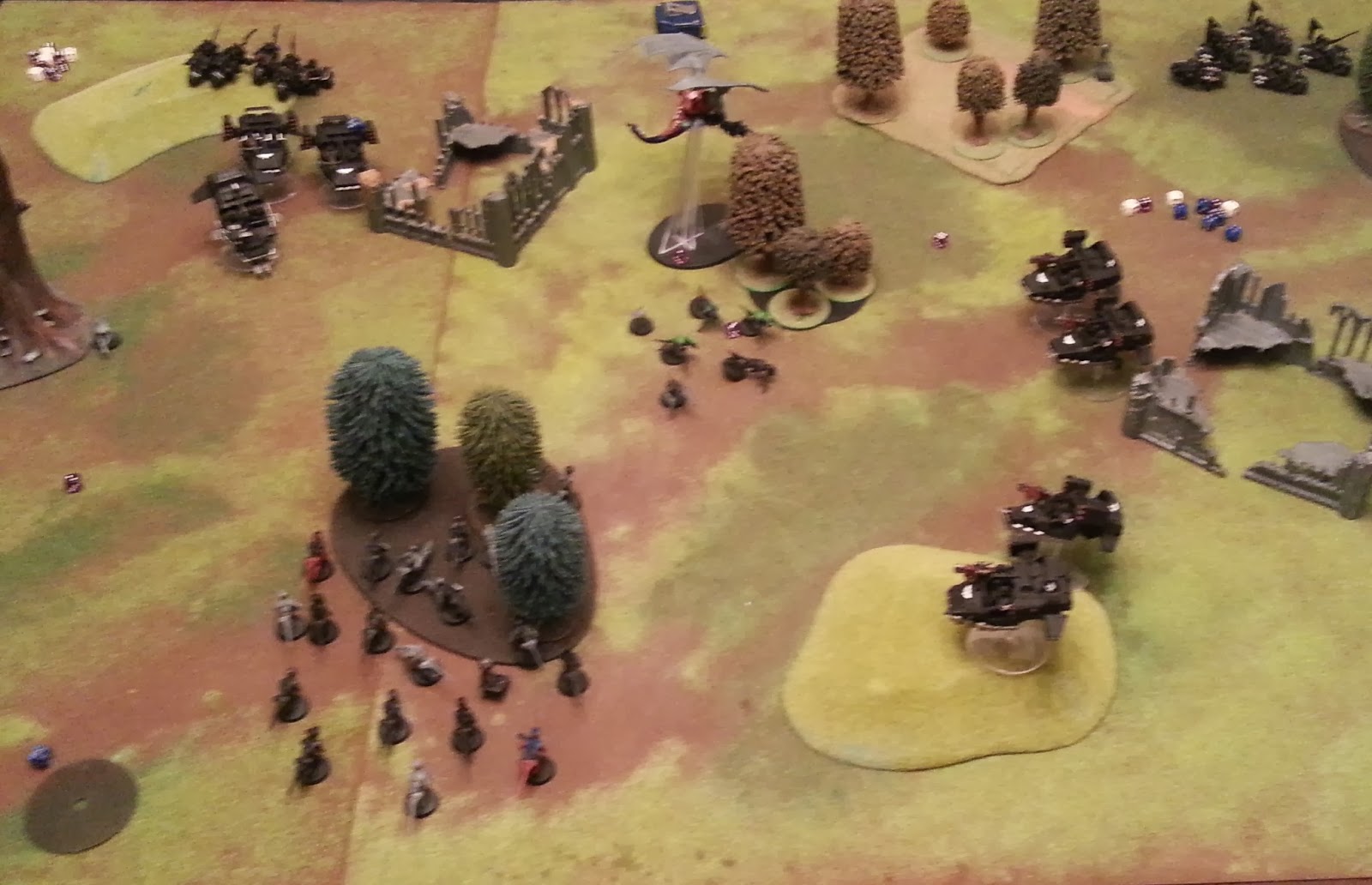 The speeders face the harpy who is now a viable target while the bikes go after the termagants.

Finally the genestealers die to the bikes, and the speeders murder the harpy. Sammeal shoots at the venomthrope again, but it goes to ground and is fine, a speeder manages to hit it with a krack missile though and instant kills him. A bike unit kills the lone termagant while the rest manage to kill off 3 more hormagaunts who run. 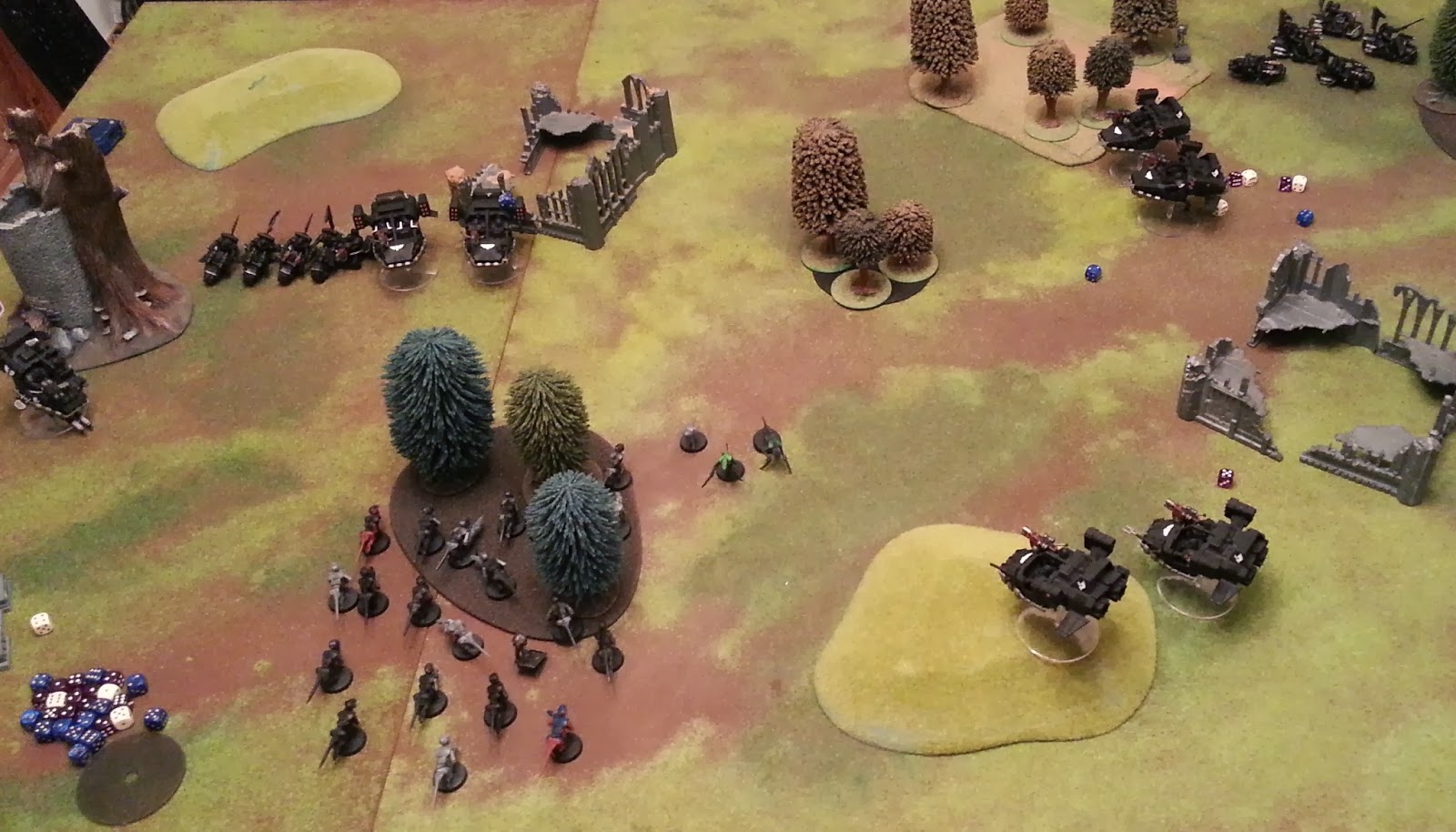 That battle went terribly, as soon as he stole the initiative it was an up hill struggle. Out flanking the tervigon was probably a bad idea as I needed as much synapse on the table as I could, but I wanted to try and outflank next to his objective and just swarm it. It didn’t work though. But I loved the game, I enjoyed it so much I didn’t care that I lose.

What I learnt the most about this game was even though I have first turn with flying monstrous creatures, I should still hide them encase of the first turn getting stolen. If they had all survived, well that game would have been very different. And the synapse thing, defiantly need more synapse. However I did have a slight chance of pulling off a victory towards the end IF the genestealers didn’t’ die and the hormagaunts didn’t run, as I might have been able to disrupt his objective and get line breaker for a 4 – 2 victory! But as it happens my objective holding unit ran... gits.

Anyway I really enjoyed playing this game, and I hope you guys enjoyed reading about it as well.
Posted by Malduran
Labels: Battle report - 40K