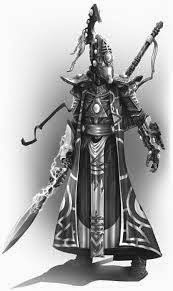 It’s been a few days now since 7th was released and I have only managed a single game. While on the face of it I didn’t think that much has changed but I was very surprised how much just a few little changes can make on a game.

7Th has introduced a new phase into the game (which honestly I forgot a few times when I played), the psychic phase and this was massively different to how psychic powers have been handled before. This new way of casting powers (rolling a number of D6 and needing so many 4+ results to cast) has made casting powers a little harder. It’s probably just because it’s new and I haven’t quite got the hang of it yet, but still, it’s made casting powers harder for high leadership casters and easier for lower leadership psykers. The number of powers that will be cast a turn will probably reduce as you really need at least 2 dice per warp charge 1 power. Unless you buy a load of lower psykers in order to boost one big guy. I can only really see this working for daemons or grey knights who have a lot of brotherhood units. Another interesting change to powers are that if you are in a transport you may only cast whichfire powers, so no more casting powers on your own transport or the unit inside.

For Eldar this means that my farseer has lost a little bit of potency, especially with prescience going up to warp charge 2! But it does make guide a much better power option now. On the up side it has made Warlocks much more interesting of an option for guardian units, as they are more likely to be able to cast conceal or whatever power they have. This opens up a few more tactics and indeed could help bike units as well. Eldar also get access to two more psyker tables, the Daemonic ones, which can either allow you to summon daemons onto the battle field (not very fluffy, I will not be doing that) or make it easier to banish them (I might find a very nice use for this). I am looking forward to experimenting with these new rules and will make council of war very different from what we expected when we signed up.

Most of the other phases have remained the same but for a few changes to a few rules such as charging though cover is just a -2 to whatever you roll on sD6 now, nothing much else to talk about. The major changes come from some unit types, most notably tanks and buildings. The damage chart for vehicles changing once more has made they more survivable than ever with a roll requiring 7+ to explode a tank. This has made tanks a much more interesting option as they will mostly just get glanced to death on the table sticking around that little bit longer. They will still have to fear the melta gun and be weary of lascannons but that’s how it should be. Unfortunately the humble krack missiles, the destroyer of scores of tanks now can only immobilise tanks… that doesn’t sit right with me though. But before I pass any real judgement I will play a few more games first. Buildings now have hull points as well making them a tiny bit easier to tank down if you don’t have many dedicated anti-tank weapons as you can just glance them to death now instead of it doing nothing. This doesn’t really affect me much as I don’t use them all that often.

Does this all affect the eldar much? Well it makes the wave serpent even more resilient which only helps and gives the war walker a slight chance of sticking around longer. But overall it just helps the eldar as much as it helps anyone else. IT does make the bright lance a little worse at taking down tanks and means you might need to take fire dragons again instead of wraithguard but we can still glace tanks to death with the best of them.

Other BIG rules changes are the ability for ALL units to be scoring, even tanks. This makes capturing objectives easier and units of swooping hawks potentially game winning towards the end of the game if they can just drop in and steal an objective. It also means that we aren’t forced to take many troops if you don’t want to, personally I don’t like the eldar troops all that much, so I will be able to take a much more elite army now. However troops do have the advantage of capturing objectives ignoring other units (if you are battle forged that is).

Special rules changes have changed the eldar army quite a bit, mainly the Jink rule has changed. Now if you want to jink you have to say you will use it BEFORE any rolls to hit have been made and if you do if can only snap shot next turn. The cover save it gives is a 4+ though so with a holo field its 3+ and so resilient as hell. I have looked over the rules and I can’t see it saying anything about it affecting troops inside so you could jink and still drop people out next turn without issue. So d-scythe wraith guard might be a bit scarier now.

Right now that is all I can really give information on as I don’t have any real experience yet. But I will be posting more as I come across interesting changes which aren’t obvious right away. I think this edition will continue to be nice for the eldar.

What do you guys think?
Posted by Malduran
Labels: Article, Eldar