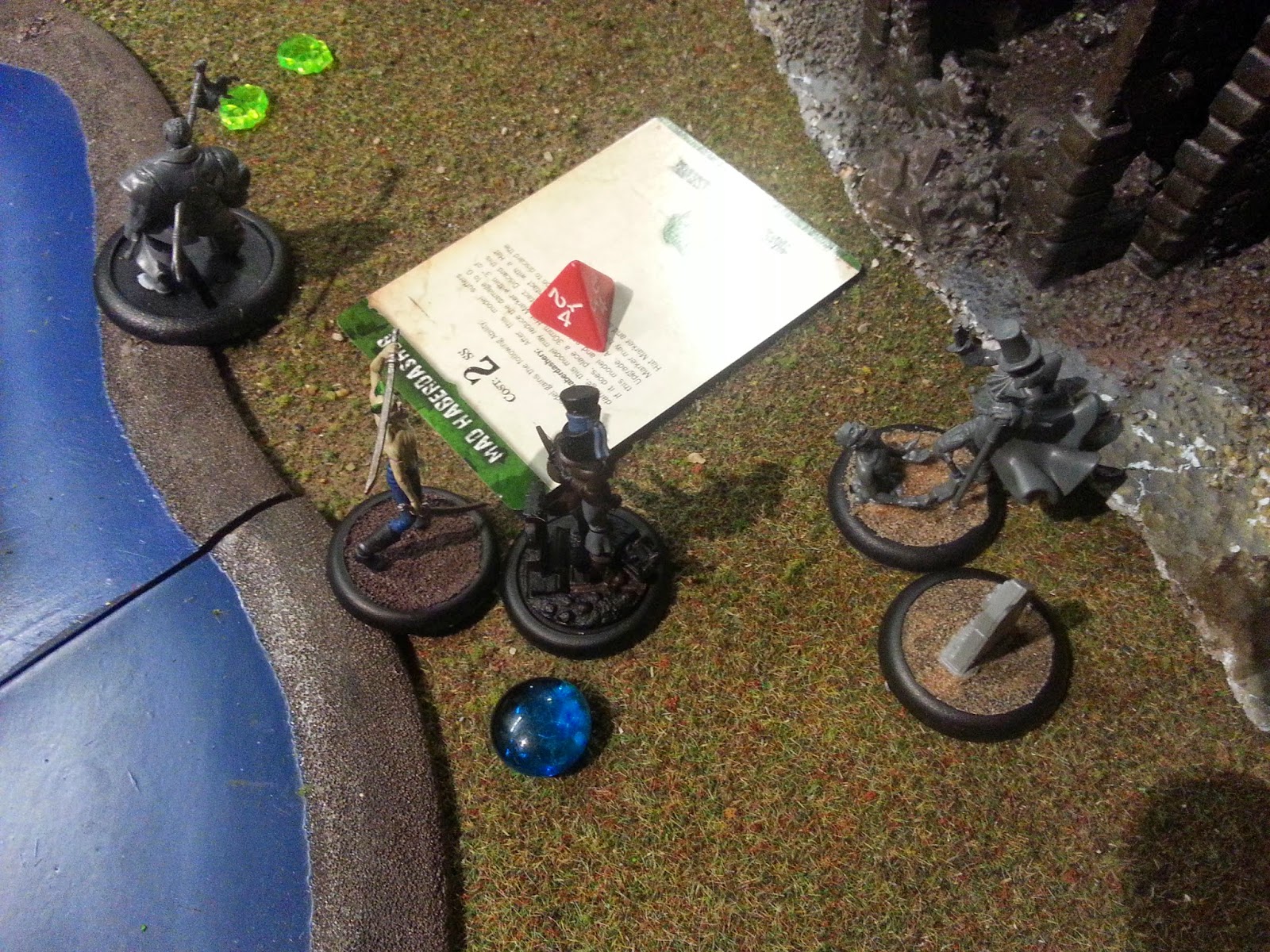 This is my first go at attempting a Malifaux battle report so please forgive the sloppy format, hopefully it will get better over time. This is a Nicodem vs Seamus 40 soul stone game.

We set up the terrain on the table, we place a river down the middle, trees a ruined building and a laboritory on the table.

Factions: We both declare Resurrectionists as our faction.

Flipping for deployment I win and select my opponent to deploy first. He places two of his rotten bells along the right of his deployment zone, Madam Sybelle in the middle with the final Belle, and on the left Seamus and the copycat killer deploy in the grave yard. He has Bet Noir start buried.

To counter this I deploy mainly on the right, Nicodem hides behind a wall in the ruined house with the punk zombie. Slightly to their left Toshiro deploys behind the sucker dog. To the left of them the other dog deploys and Mortimer hides behind a tree. 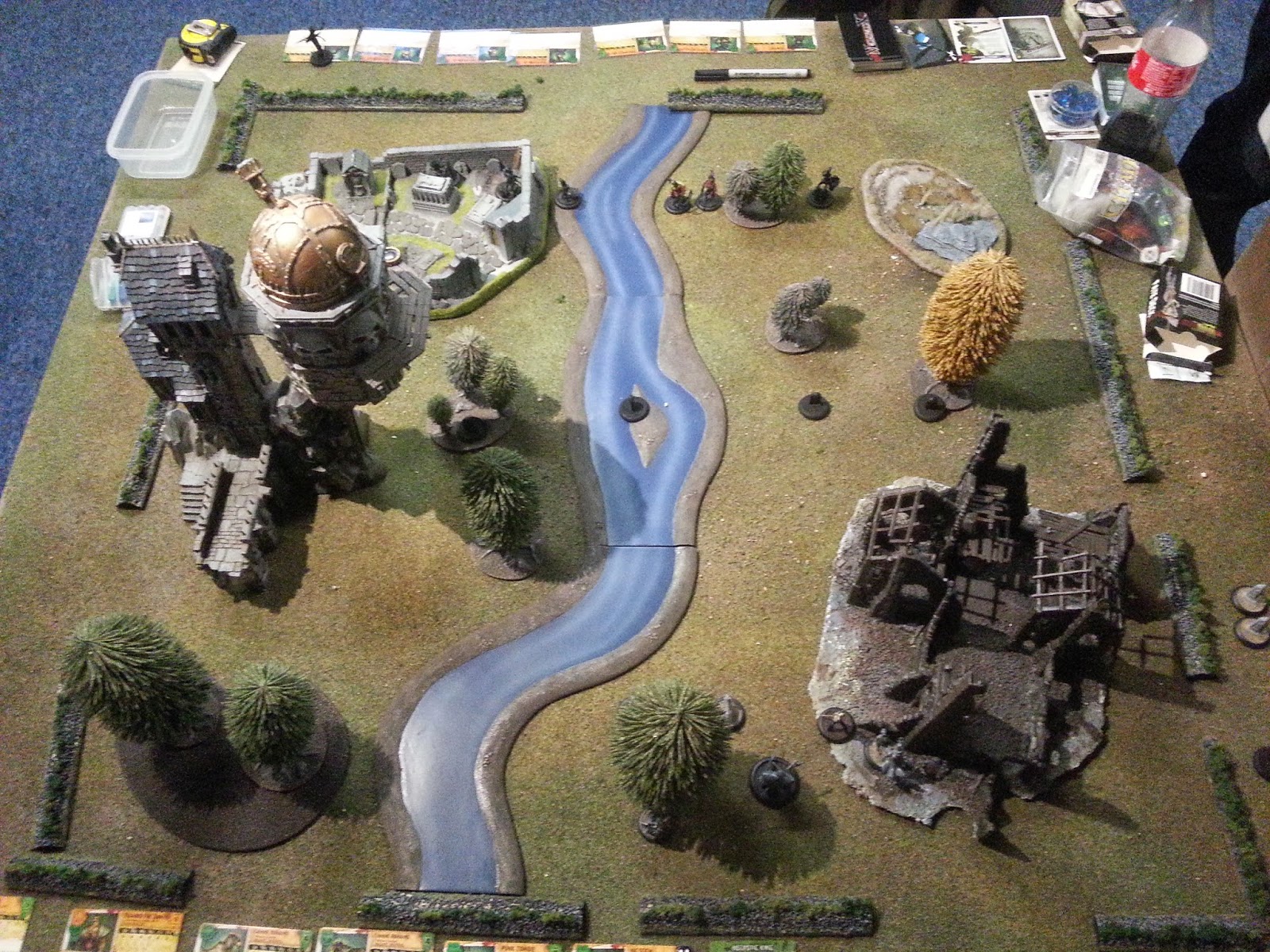 Turn 1: Flipping for Initiative, I win. 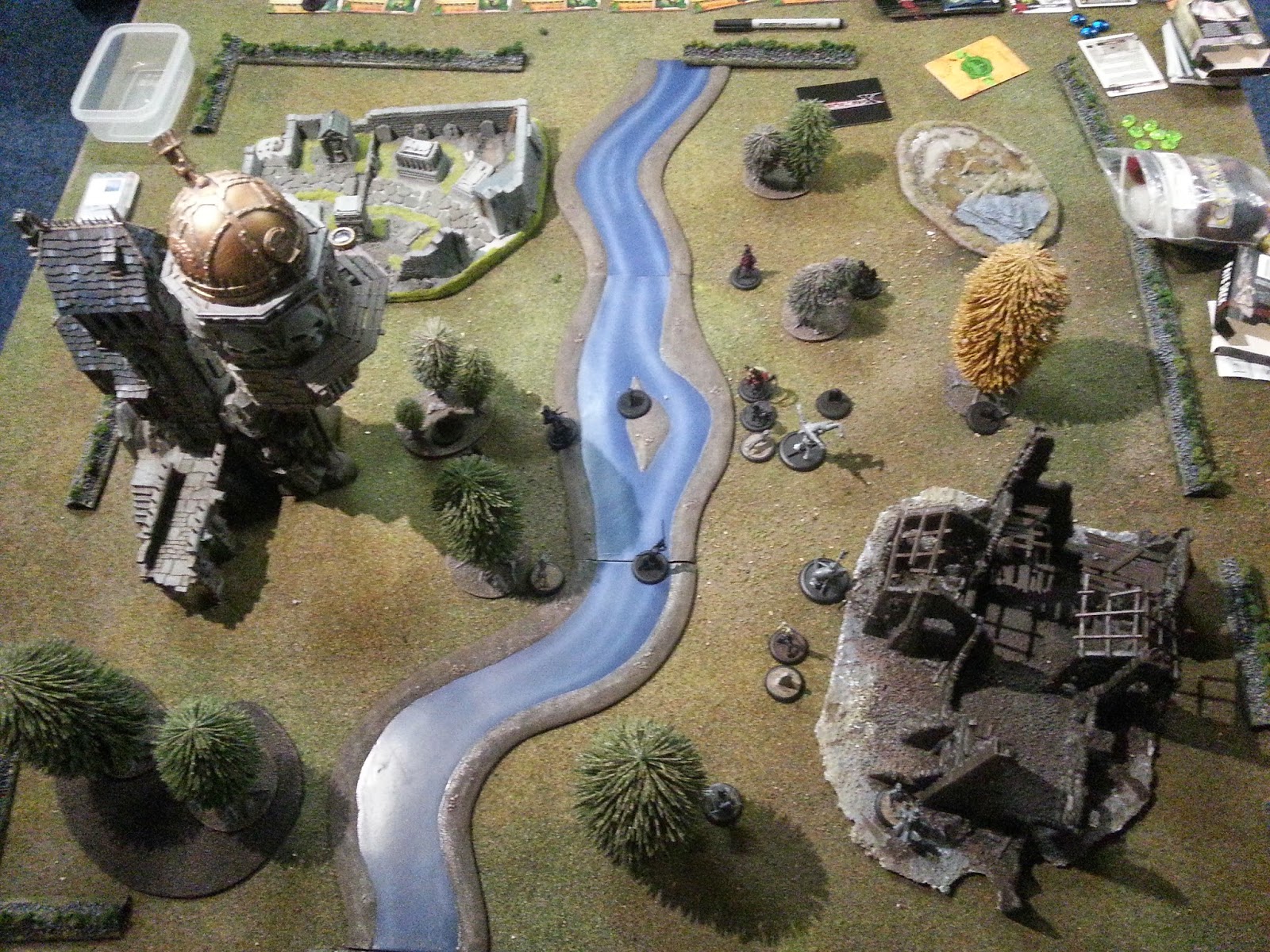 I win the flip for initiative again 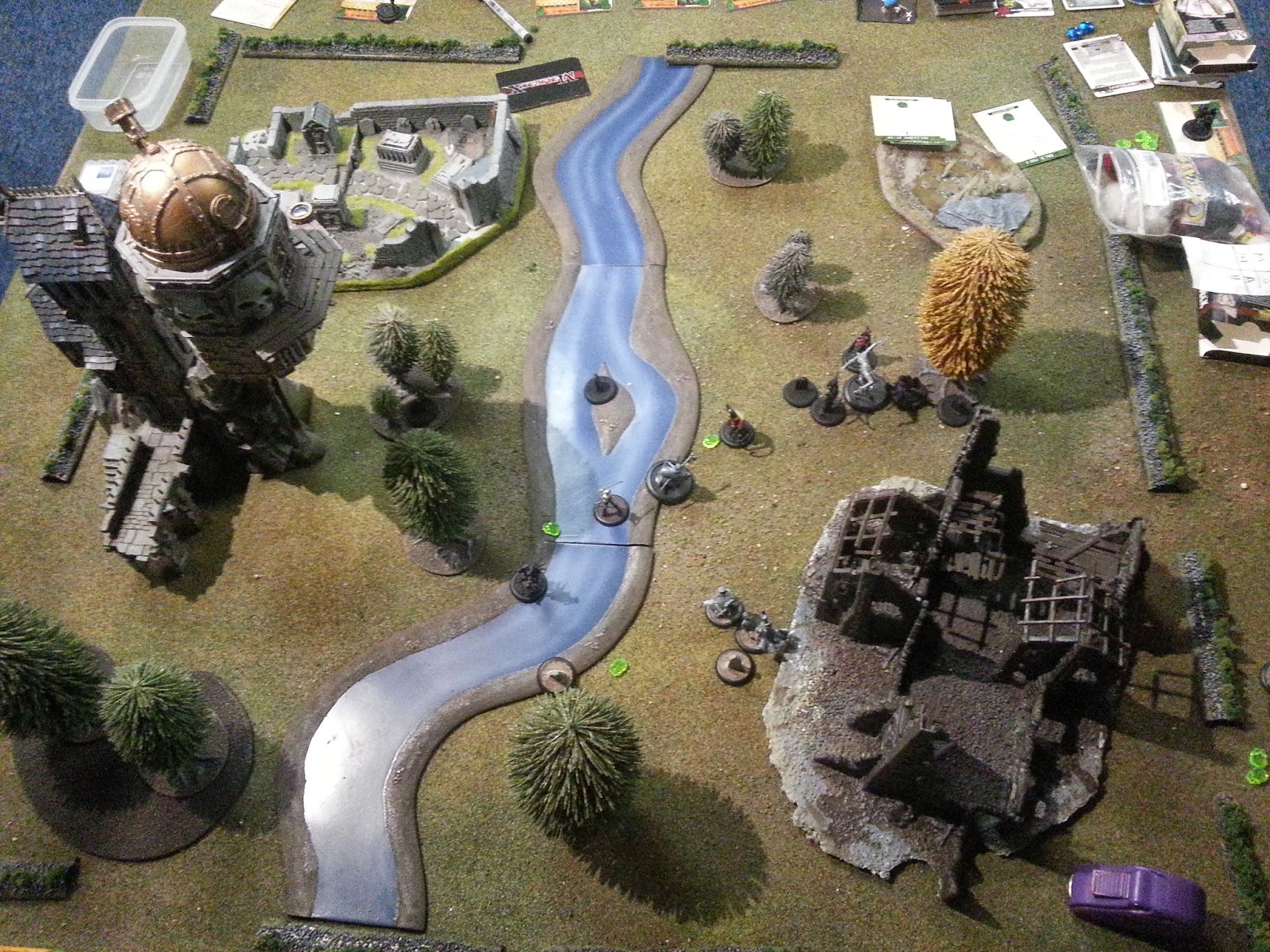 I really need this turns initiative but fail, I use a soulstone to increase my flip of 2 up to a 3. 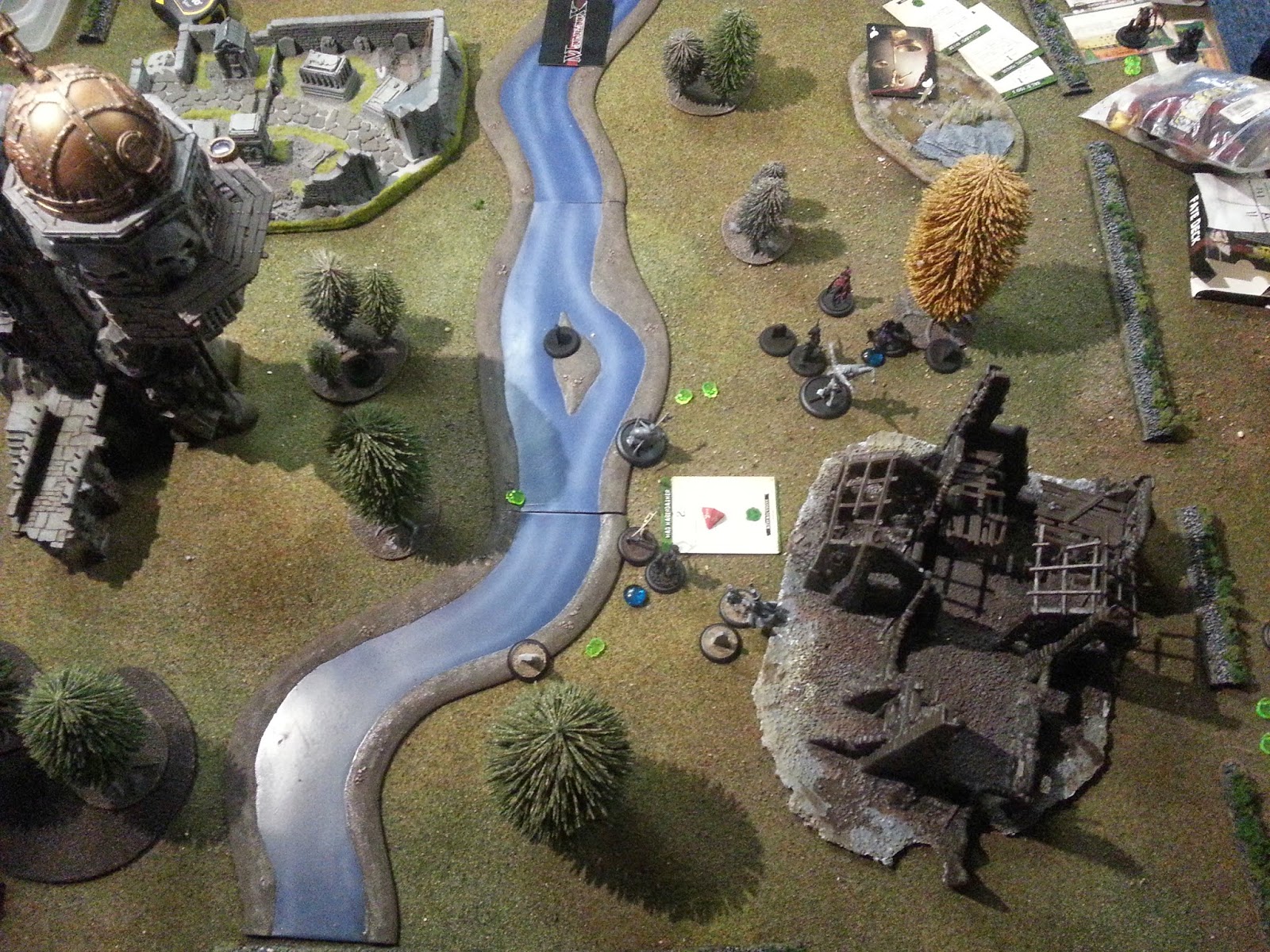 Again my opponent wins the flip for initiative

I win the initiative this turn

We flip for turn 7 but fail.

This was my first game using the proper rules for schemes and I was quite happy how it ended up. It was quite surprising how different the game becomes when you have a few targets, instead of just kill the enemy for 5 turns.

I feel that my crew wasn't too bad, at least in this game it wasn't too bad. Using the dogs and Mortimer to get more corpse tokens straight away did help, as it got me more minions turn 1. But that was a very basic tactic, maybe dropping an upgrade or two for more soul stones would help me raise more minions as later in the game I was struggling to raise more models.

The combination of Toshiro and Nicodem really helped to make my other models hit with the double positive flip. Apart from that I didn't have any real synergies, but I will work it in the future.

Anyway, I apologise for the state of this battle report, I am not happy with it but I will hopefully make a better report in the future.
Posted by Malduran
Labels: Malifaux