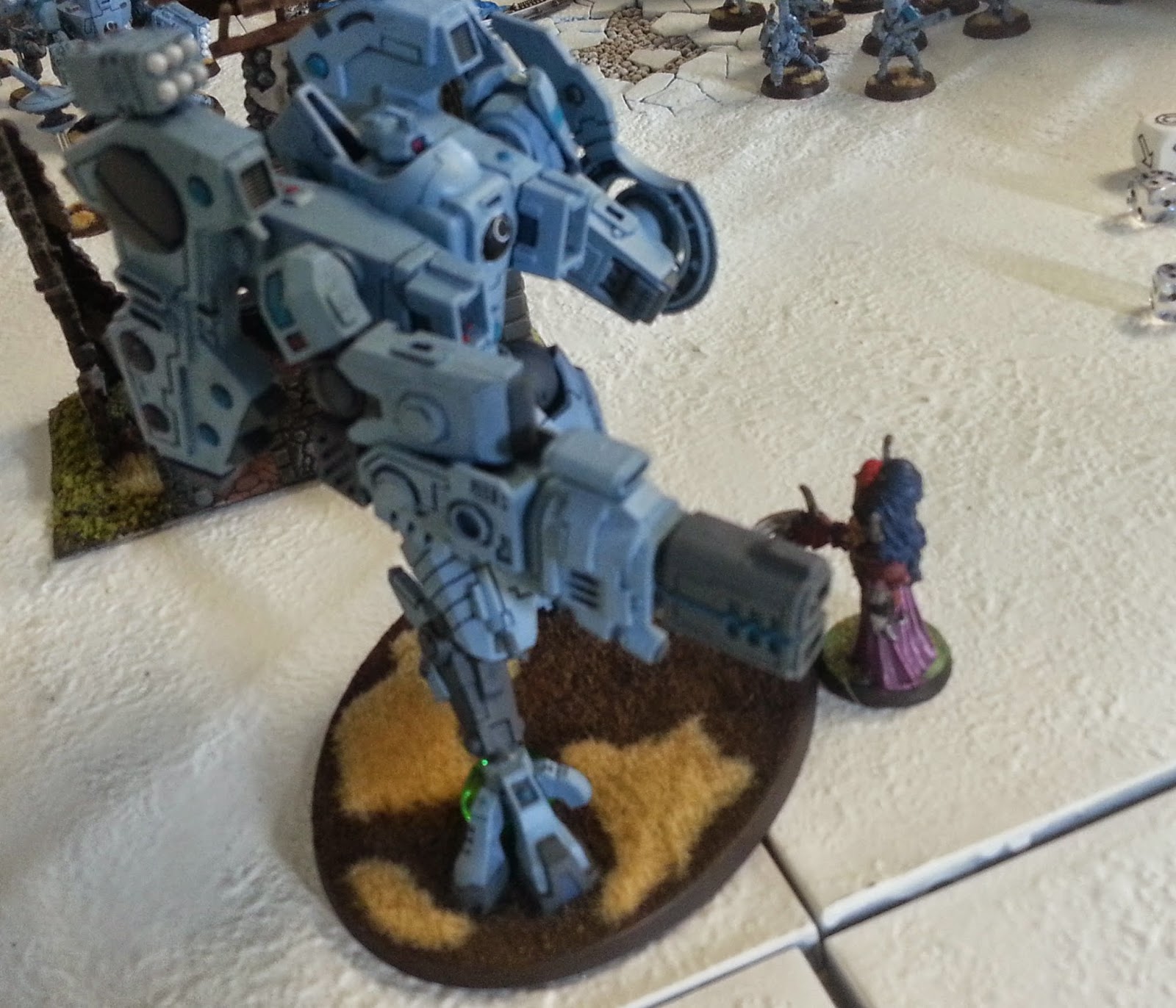 With the release of the Dark eldar codex I decide to dig out some of my old models and give them a go. In the ruins of Velak the dark eldar attempt to steal away Tau slaves but they put up a heavy resistance. The game is a 1500 point Big guns never tire game of Dark Eldar vs Tau. Let the slave raid begin!
The Armies

Rolling for mission we get Big guns never tire, with 4 objectives for us to take. Deployment type was dull, as it was just dawn of war. Before rolling for deployment zones we placed the objectives down, and they all got placed quite close to the centre line with one slightly closer to one deployment zone than the others.

To counter this I abandon the left flank, letting the broadsides walk for a turn. On the far right I place the beastmaster unit as they can move up the flank hidden in the ruins. Behind them the reavers deploy as they are fast enough to get to where they need to be. In the middle of the deployment zone the incubi raider deploys inside in ruin hopefully hidden for the first turn. The other raider goes on the right side of the ruin, with the unit of Talos in front of them. Behind them the two venoms deploy. Both ravagers hide at the back of the table. I infiltrate the Mandrakes onto the objective in the ruin on the right hand side. 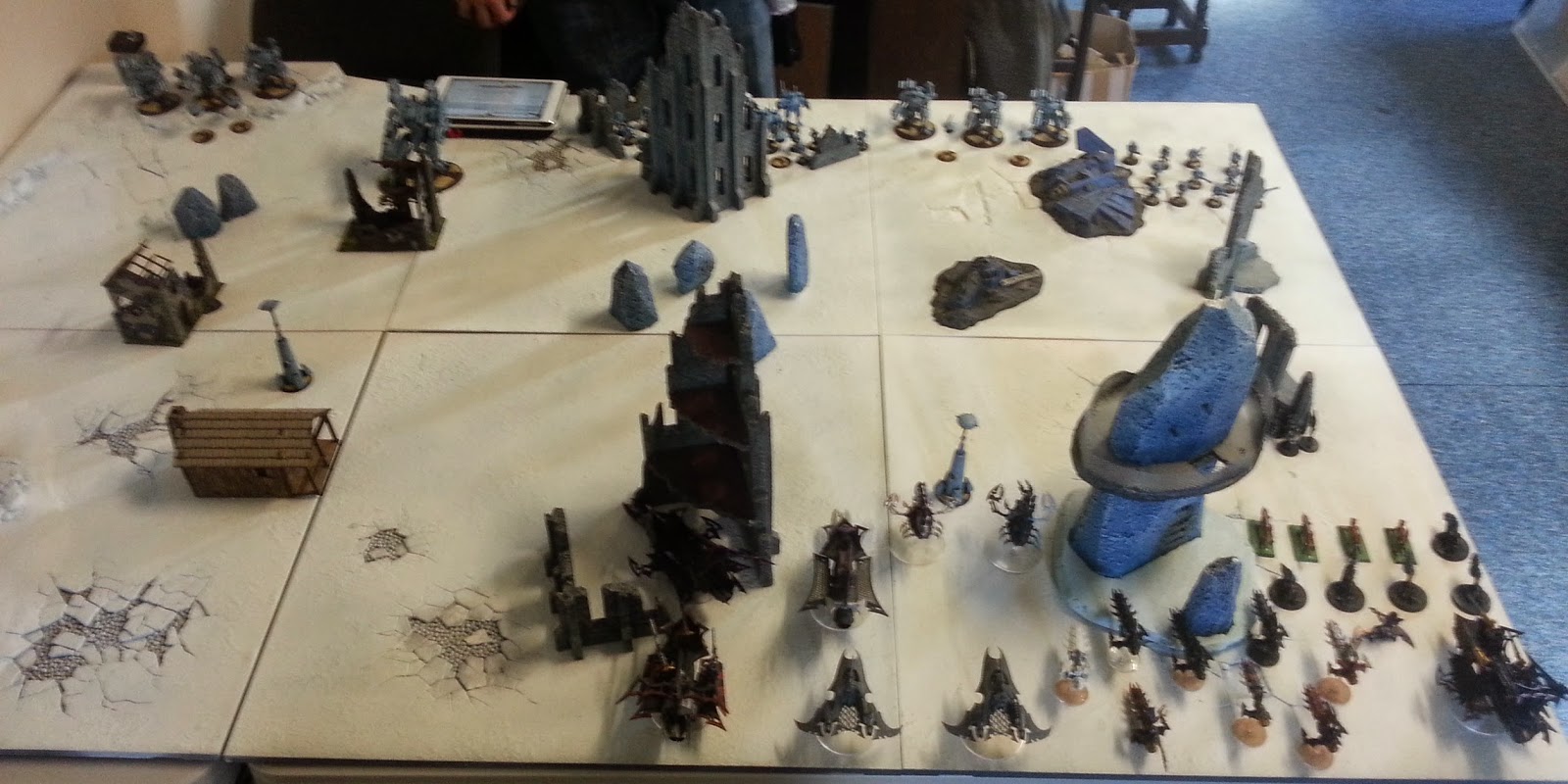 Attempting to activate its nova reactor, the Riptide wounds itself as the reactor overheats. Regardless it moves forwards ready to take down some of the transports. The fire warriors on the right advance towards the objective in the ruin while the broadsides and path finders on the left move towards the right so they can fire next turn. Using its powers, the Ethereal gives units with in 12 feel no pain. 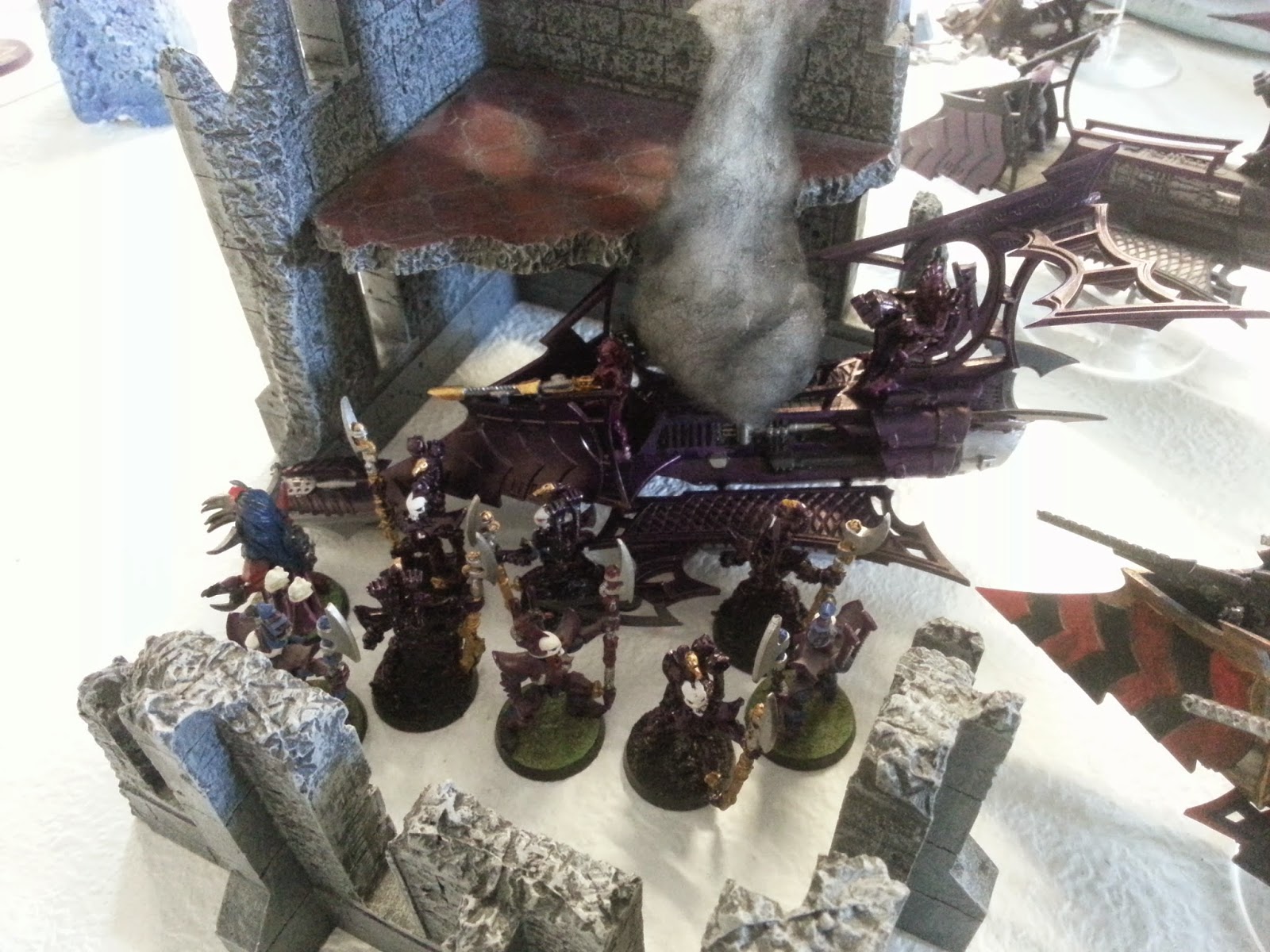 On the left the broadsides run a full 1 inch, followed by the path finders. Over charging its gun, the ripride shoots at the incubi's raider which attempts to jink, and the shot locks on. It gets a penetrating hit but the tank jinks out the way, the smart missiles then fire at it and get 2 glances on it. Some long range shots from the fire warriors can just about hit the raider and mange to get a single glance past its jink save, wrecking the transport. Path finders on the right target the other raider and get 3 hits with their marker lights. Using all 3 to get +1 bs and ignore cover, the broadsides explode the raider and kill 2 of the warriors inside. On the right the fire warriors manage to kill 2 of the khymera.

Assault phase and the riptide jumps back again. 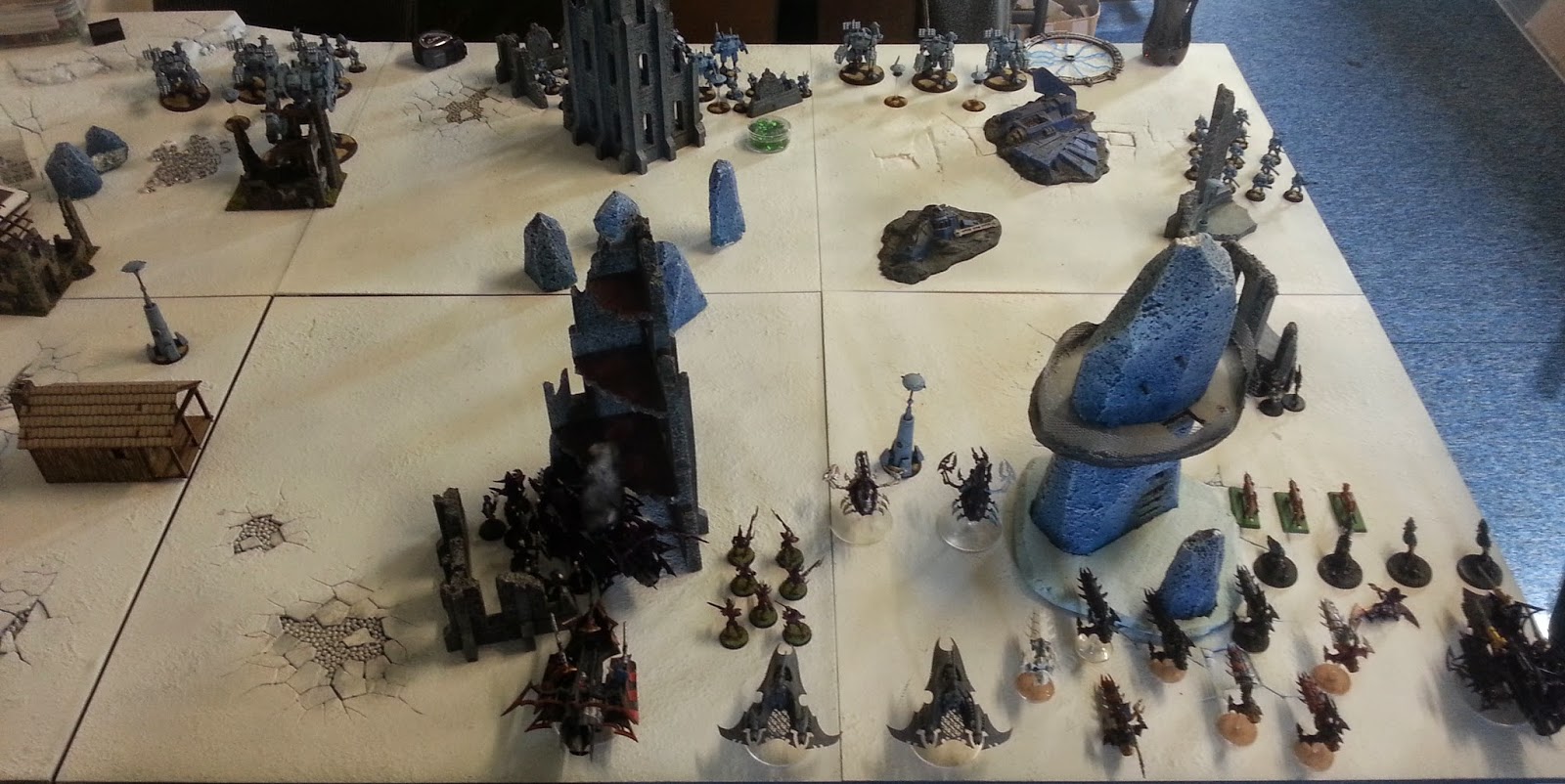 With the fire warriors on the right advancing it gives the beasts a good chance of a turn 1 charge! The ravagers move just 6 so they can fire all of their guns. Taking point the Talos unit pushes forwards right up the middle while the venoms move up behind them ready to give covering fire. Now on foot, the incubi push forwards up the middle, as do the warriors. 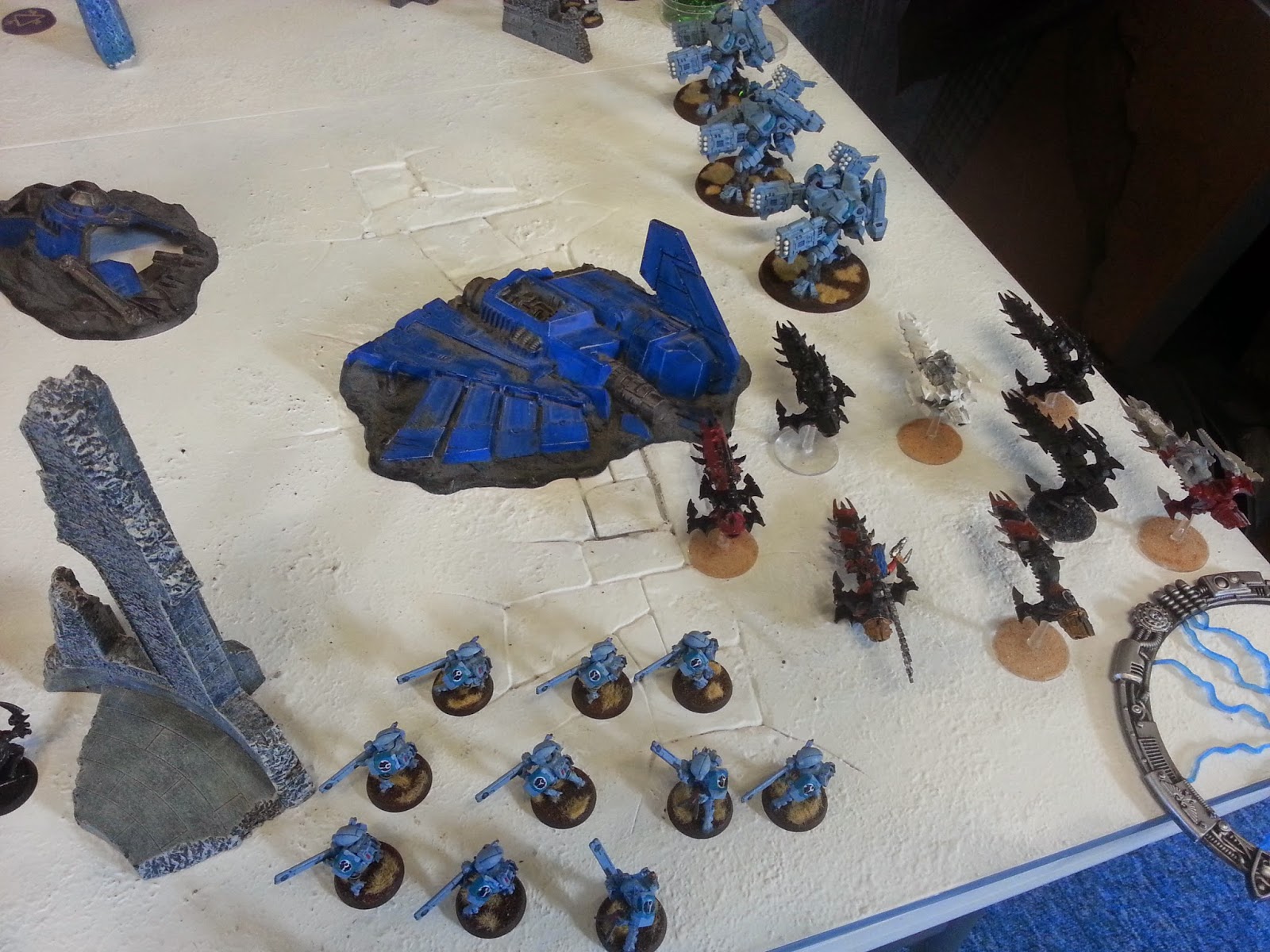 Having so far to go the Talos unit runs forwards 6, and the incubi run 5, attempting to get into cover. A single venom targets the broadsides and manages to kill a shield drone. Both ravages shoot at them then and the first totally misses. The second ravager hits with 2 but the shield drone absorbs all the shots. The second venom targets the path finders on the right and kill 2 of them. Boosting, the bikes move 36 and they move next to the broadsides, hopefully ready to attack next turn. 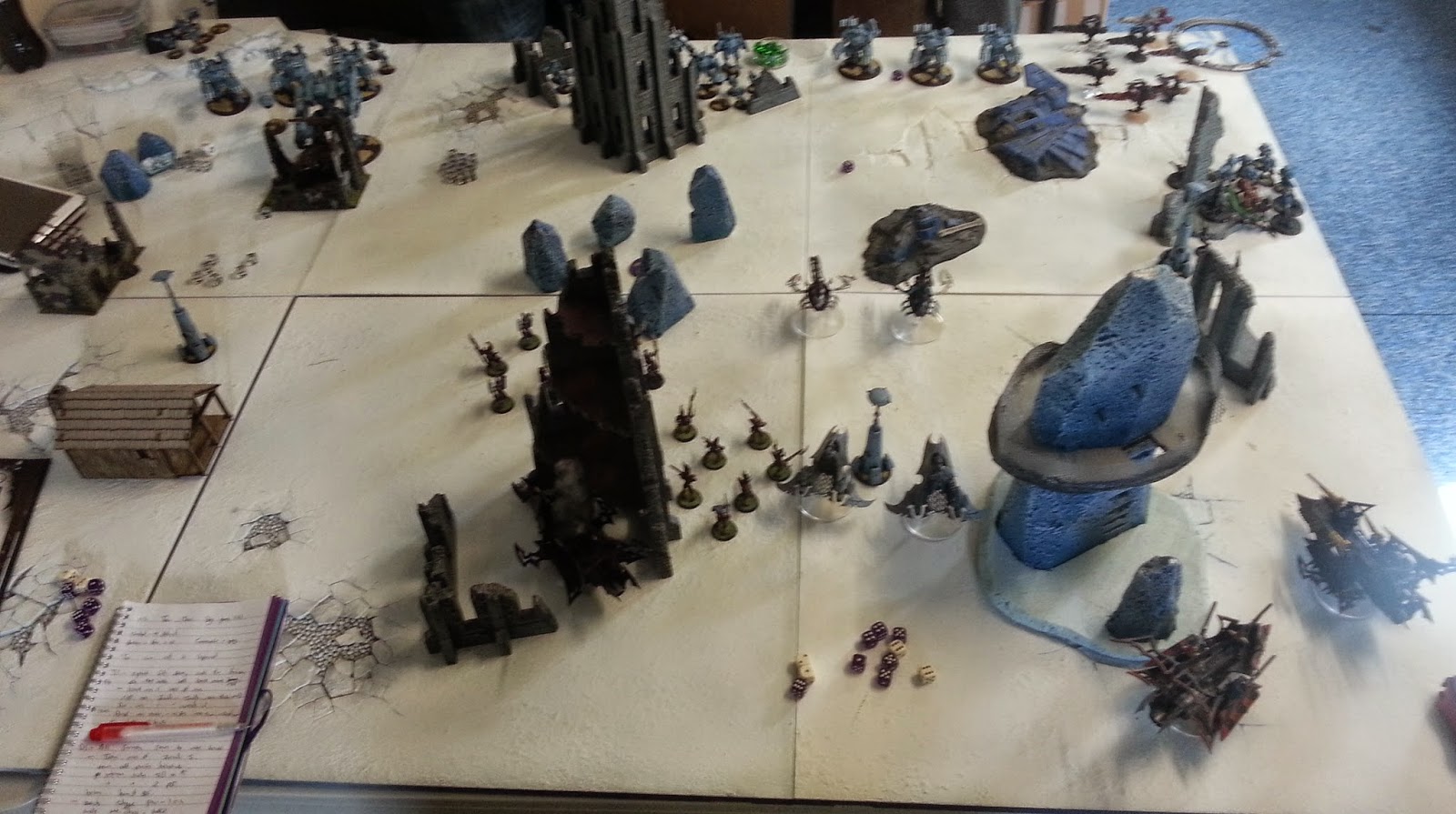 With the unit of Talos getting close the commander and crisis team move forwards to engage the unit. On the left the riptide again attempts to nova charge but again, nothing happens. Undeterred the Riptide moves towards the dark eldar line regardless.

The right path finders shoot at the bikes with marker lights and get 2 hits, allowing the right broadsides to shoot at them ignoring cover, they all die. On the left the other path finders mark the incubi and get 3 hits, the other unit of broadsides use 2 marker lights for +2 BS and shoot them. High yield missile pods take down 3 incubi while the smart missiles manage to get though the shadow field twice! Reducing the archon to 1 wound. Using the last marker light, a unit of fire warriors target the incubi with +1 BS and manage to kill 2 more! Using all of their ap 2 weapons, the commander and crisis team kill one of the talos and put a wound on the second. The riptide overcharges its gun again targeting the venoms, but the shot scatters to kill a dark eldar warrior but the blast is saved on the venom itself. Smart missiles are less forgiving though and wreck the target. The fire warriors in the ruin target the second venom and even though it jinked the light vehicle gets wrecked, and the passengers are pinned. End of the shooting phase and the archons shadow field fizzles out, leaving him rather unprotected.

Assault phase and the riptide jumps forwards while the commander and friends go back to the safety of cover. In the actual combat though the khymera manage to kill of 6 fire warriors with out taking a loss, the few remaining attempt to run for it but are cut down. 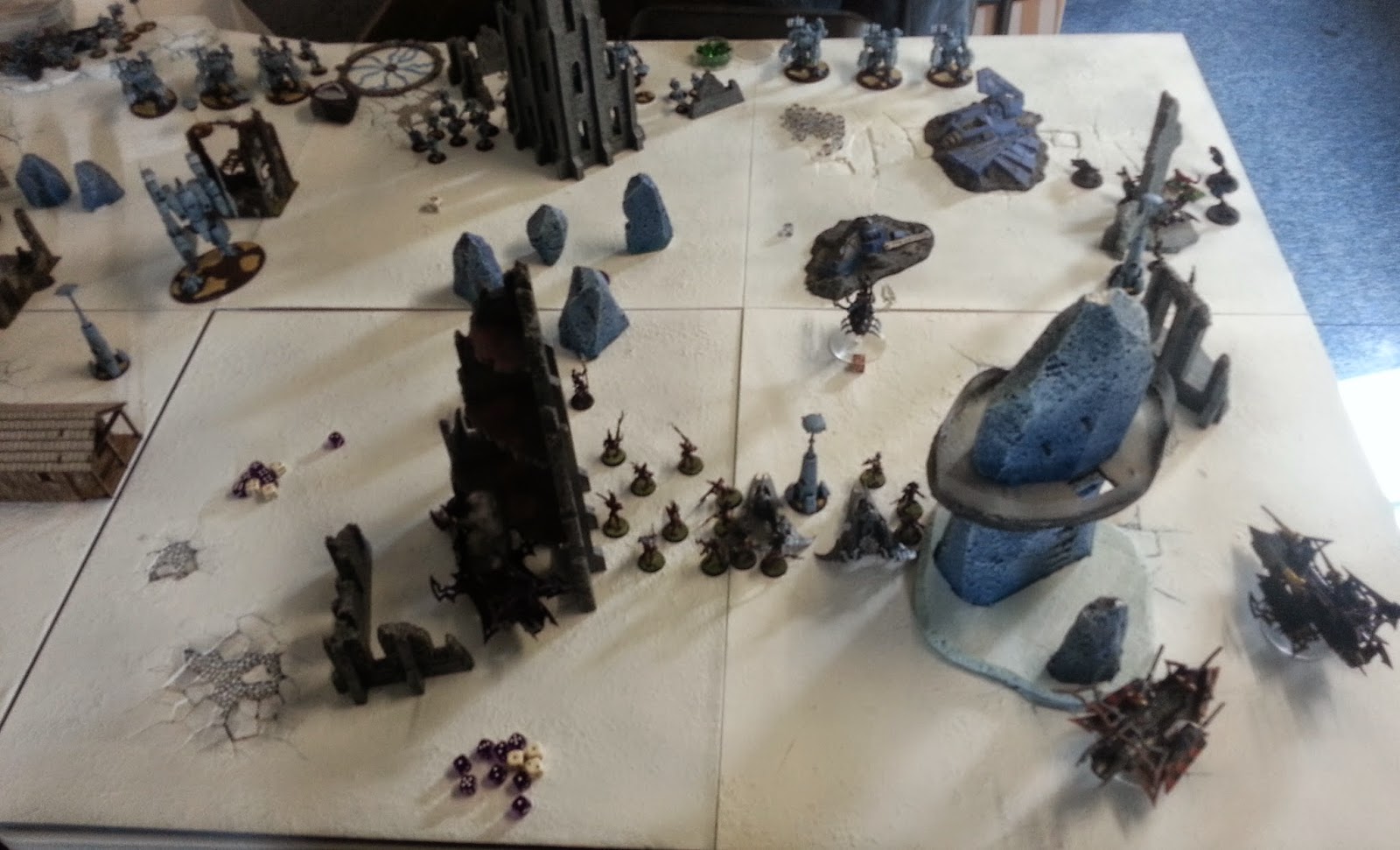 With free rain the beastmaster leads his unit towards the pathfinder and broadsides, not sure who to charge. The talos pushes forwards and the incubi head for cover while the Archon, who is next to useless now goes on a rather brave mission to kill the riptide (unlikely, I know).

Shooting is less than impressive as I have lost a lot of it, but both of the ravagers target the broadsides on the right, they go to ground for a 4+ cover save and only a single 1 dies, leaving 1 remaining. Firing wildly the talos targets the pathfinders and kills 1. A single splinter pistol shot from the Archon hits the riptide but fails to wound.

Assault, the Archon charges into the riptide who fails to hit him with overwatch, out of 5 attacks, only a single one hits, it wounds, but bounces off the 2+ save of the riptide, who in turn crushes the Archon with all 3 attacks, despite needing only 1 wound (and 5's to hit!). The beastmaster herds his khymera towards the lone broadside, and the vast number of attacks in enough to kill the last suit despite its 2+ armour (bit of a shame, I would rather have stayed locked in combat). Not allowing the Talos to make combat the commander and friends again move towards it. The remaining broadsides move forwards to get into range and unsurprisingly the nova reactor on the riptide fails and wounds the monster! Still the riptide moves forwards. Wanted the dark eldar dead for going against the greater good the ethereal gives the fire warriors in 12 inches +1 shot.

Again targeting the incubi, the pathfinders mark them, but only 1 hits. The few remaining on the right target the beasts getting also, only 1. Starting with the easy kills, the commander and crisis team down the Talos with ease. Inspired by their ethereal, the fire warriors in the ruin target the beasts with +1 BS and gun them all down. The second fire warrior unit shoots at the incubi with +1 BS but only 1 dies (I failed 4 saves, but made 3 Feel no pain rolls, thanks power from pain). Even though they are snap shooting, the broadsides target the warriors in the open and get enough 6's to hit to wipe out the unit. The riptide overheats hits weapon and his smart missiles are out of range of a ravager so does nothing.

Assault phase and the riptide moves into cover as does the commander. 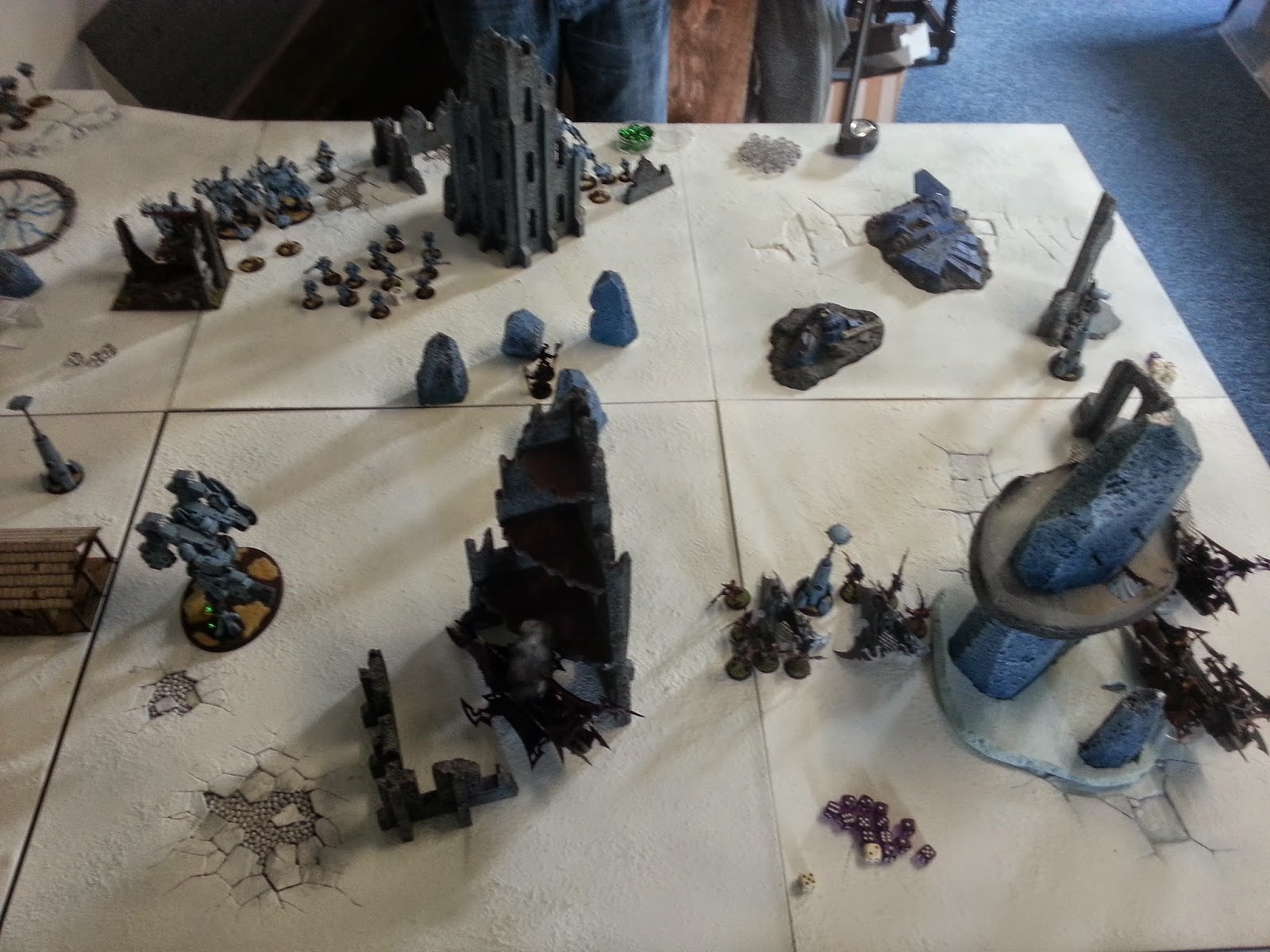 I really have very little left, so I have to make it count where I can, one warrior squad moves out of cover of the wrecked venoms to see the riptide while the other moves further into cover to claim the objective. Both ravagers move to see the riptide, hoping to kill it in 1 turn.

For a laugh I shoot the warriors into the riptide first and some how they wound him! Getting cocky, I fire a ravager and all its shots miss... I fire the second one and get very lucky as all shots wound and he fails both his invulnerable save and feel no pain, killing the monstrous battle suit. 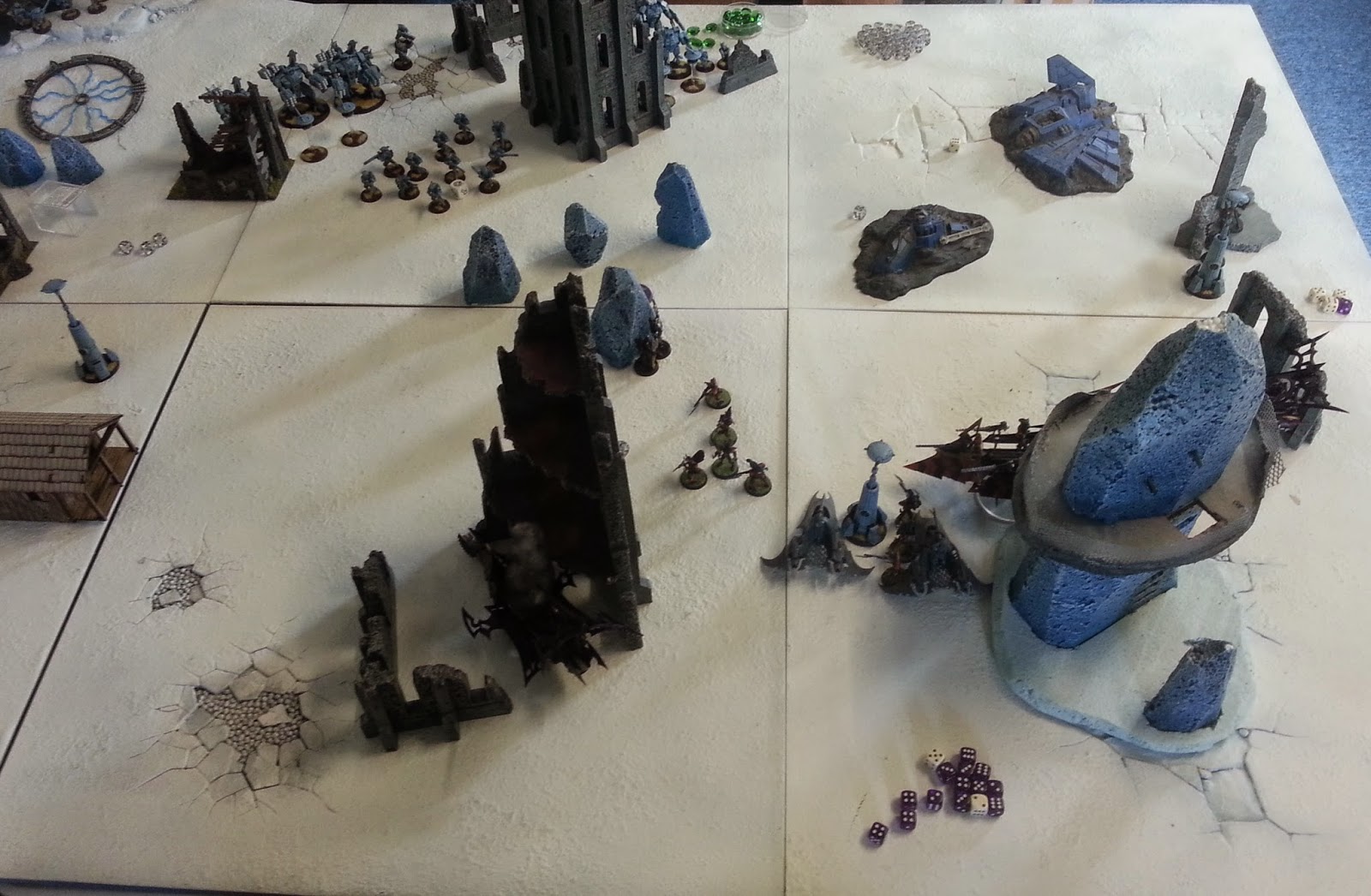 With it getting late in the game the commander pushes forwards towards the mandrakes who are still hidden in the ruin on the right. Moving towards the central objectives the fire warriors and broadsides both move up and again the ethereal gives an extra shot to fire warriors.

Marking the front ravager as the next target, both units of pathfinders target it and get 2 marks on it. The broadsides snap fire at it with +2 BS, so the ravager jinks. The sheer number of shots the broadsides can put it is enough to wreck the tank despite it jinking. Attempting to get lucky, the two fire warrior squads target the other ravager and manage to get 2 glances (it didn't jink). The commander runs towards the mandrakes.

Assault and the commander jumps towards the mandrakes. 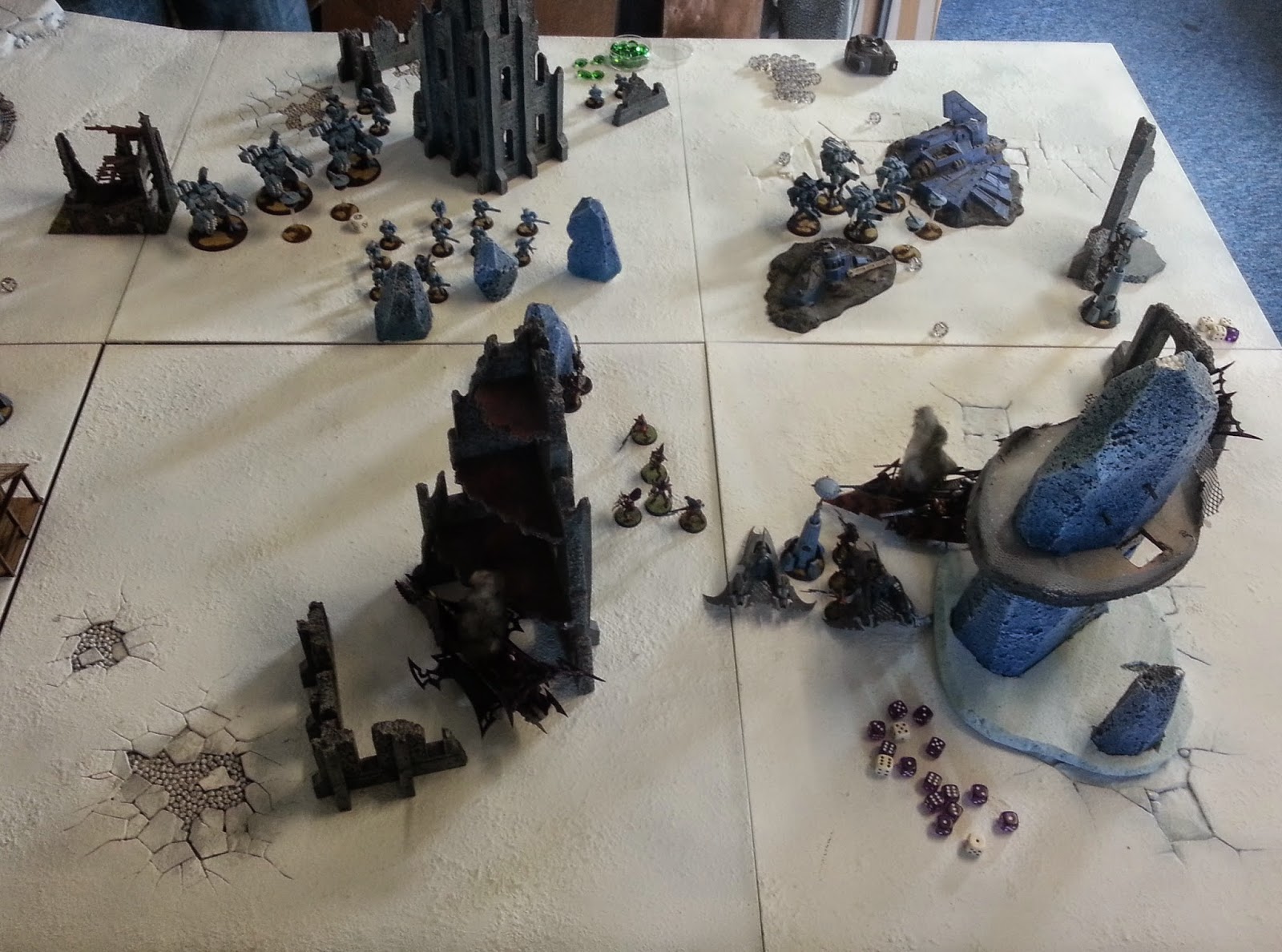 My forces rally around the simple plan, I need to kill the commander and his unit, so the mandrakes break cover towards them as do the incubi while the ravager moves back a bit and faces them.

I attempt to take out the shield drones first with the mandrakes, their shooting attack only manages to down a single one, the warriors shoot next but do nothing. That leaves the ravager who hits with all 3, wounds with 2 but both shots are absorbed by the shield drone.

Assault and the mandrakes charge first, taking the overwatch but their 4+ cover save prevents any damage. The incubi then charge the crisis teams rear. Striking first the mandrakes fail to do any damage, and the incubi deal a single wound. In return the battle suits kill all of the dark eldar are the mandrakes don't have armour and the incubi's is apparently made of paper. 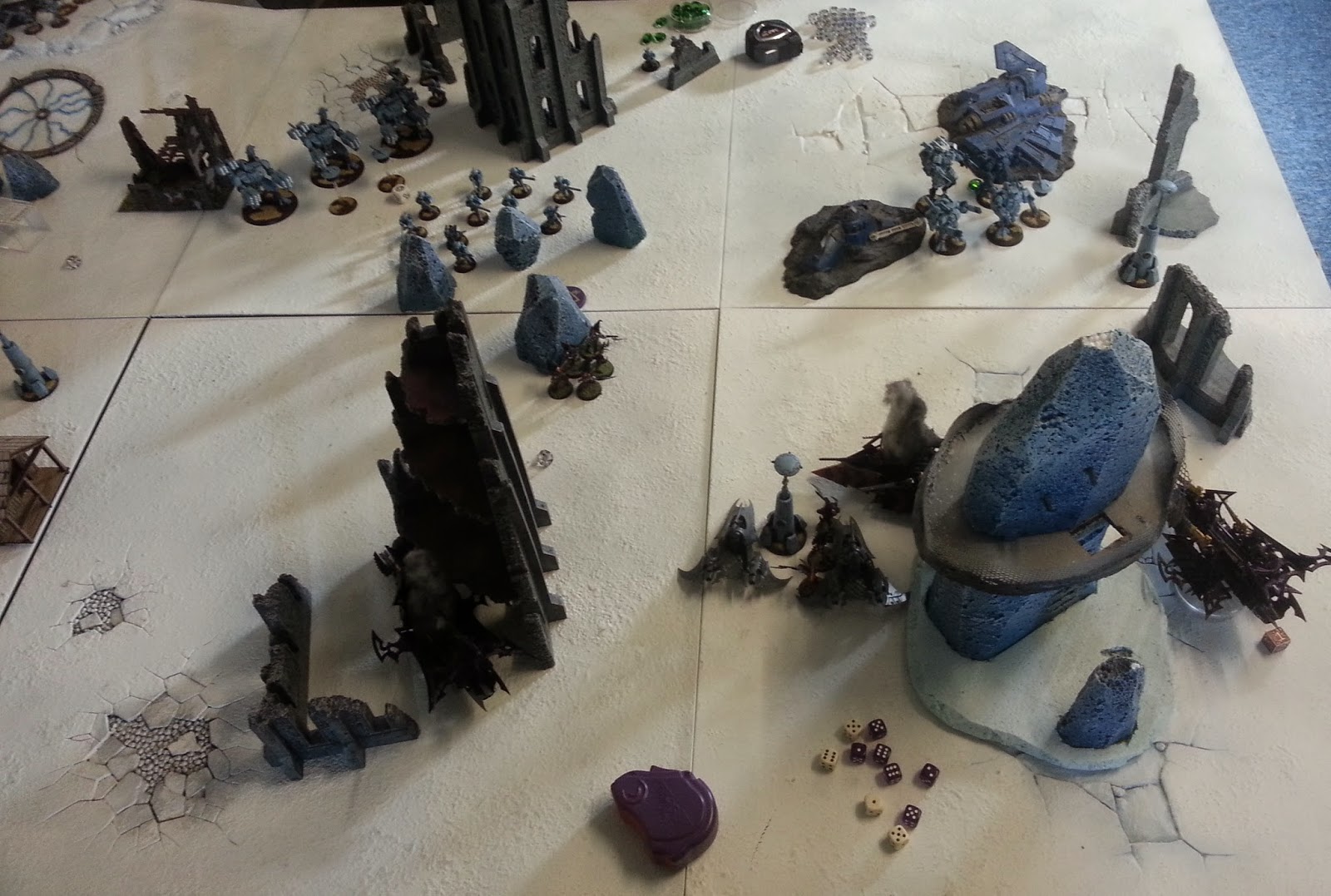 No night fighting, but as its turn 5 all of my units are fearless. The commander goes towards the ravager while the fire warriors take the central objective.

The commander shoots at the ravager, which jinks but the unit gets enough hits though to explode the tank. Fire warrior fire kills one of the units of warriors while the broadsides kill off the other with their smart missiles. The dark eldar are tabled.

That was a very interesting game, it certainly showed some strengths and weaknesses of the codex and my playing style. Facing tau was always going to be a struggle, as they have a lot of tools that can wreck the day of a dark eldar play, their basic guns can penetrate any of our tank, plenty of low ap to upset a talos and potential ignore cover on anything, not something I wanted to see really. Still despite that it gave me a feel for my army. Its far from perfect, it needs tweaks but I think it has potential.

Well that will do for now, hopefully I will get another game with the dark eldar soon for you all. Hope you enjoyed.
Posted by Malduran
Labels: Battle report - 40K