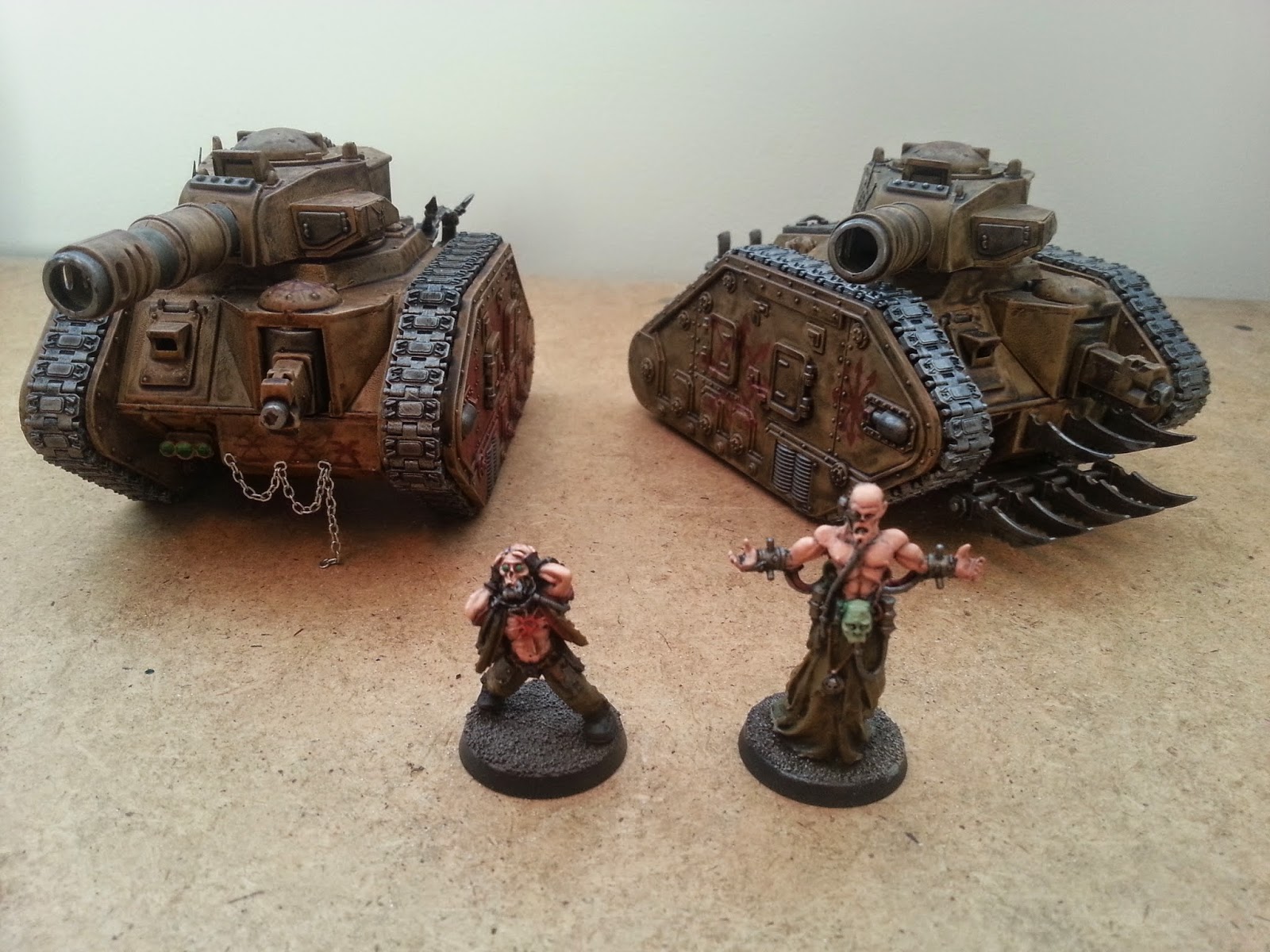 So as I mentioned before I have done a little bit of work on my Renegades and heretics, which includes getting the Battle tanks painted, as well as getting the rogue psyker finished off.


Currently I am using a lot of mutants in my lists, and having to use old warhammer ghoul models to stand in for them so I have started making some. As I don’t really have any sort of clue what the mutants should look like, I decided to get out my old white dwarf magazines from the release of eye of terror. Back in the day I loved the old conversions for the lost and the damned, so I have based my conversion off those ones. It has left me with a wide variety of models, using bits from the Zombie, Ork boy, catachan, cadian, marauder and militia box sets for a very ramshackle look. But while building them I want a few of the mutants to look like regular people, who I will paint with just a slight skin discolouration, the Imperium scorn all with the stigmata of chaos, no matter how big or small. Quite often in the fluff and models mutants are shown as these great hulking brutes with claw arms and such dangerous things, but I like the idea of also mixing in those who have no choice, the weak farmers who have to join the forces of chaos otherwise they would just be hunted down by agents of the Imperium if they stay at home just because their skin has a slight greenish hue, or they have a few extra fingers. These are just a few of the models in their most basic form, I will likely keep you all updated on the mutant progress if you would like me to.

On the fantasy front I have the big boy Nagash himself to work on. I got given him for Christmas and now that I have found a nice tutorial on youtube, which I am, loosely following, I am happy to try and paint him. Unfortunately I only have the old paints, and really can’t afford to buy any new paints at the moment (currently skint) I will adapt the guide where I can.

For Valentine ’s Day my girlfriend surprised me with a model from forgeworld, the bloody squig gobba! This is likely because not long ago I purchased the orc and goblin commands from forgeworld as I have a fear they will stop producing them like the rogue idol, and she likes the night goblins, so squig gobba. So the night goblins are currently being worked on as well, while I figure out any tricky bits of Nagash.

Also, I want to finish off my Malifaux crew, which as time has gone on I am not happy with how I painted my first punk zombie, so I will be thinking on how to paint undead in a different way. Maybe a grey base slowly bringing it to a pale skin colour for a dead look? I don’t know yet, but I will be working on it.

Any hints or tips would be greatly appreciated.
Posted by Malduran
Labels: Painting